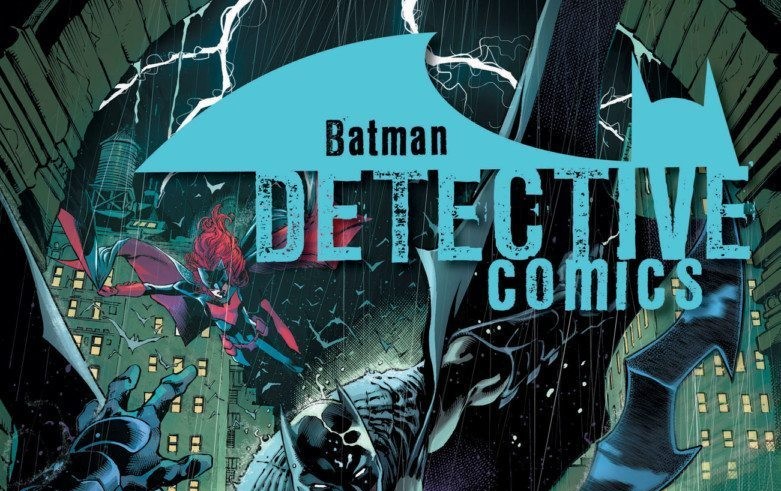 For an orphan with no siblings, Bruce Wayne sure seems to find himself with a lot of family issues. From the Bat-Family to the Kanes and Waynes, we’re going to dive into quite the family feud in this DETECTIVE COMICS #935 review!

Let’s begin with the Bat-Family: the group of current and former sidekicks and allies that have helped Batman in his quest. This group includes the likes of Alfred, Dick Grayson, Tim Drake, Damien Wayne, Barbara Gordon, and many other characters throughout the years. The current storyline seeks to expand the Bat-Family, while simultaneously building on a decades-old battle between two of Gotham’s most prominent names: the Wayne and the Kanes.

The issue begins with developing the team that was introduced in the previous issue. This team of relatively new heroes has a lot of training to do. Cassandra Cain (Orphan) has the most combat experience, while Stephanie Brown (Spoiler) has a lot of drive but little experience or training. Tim Drake (Red Robin) has worked closely with Batman before, while Basil Karlo (Clayface) has fought against the Dark Knight on several occasions. This is truly a diverse group, led by one of DC’s few LGBT characters, Katherine Kane (Batwoman). 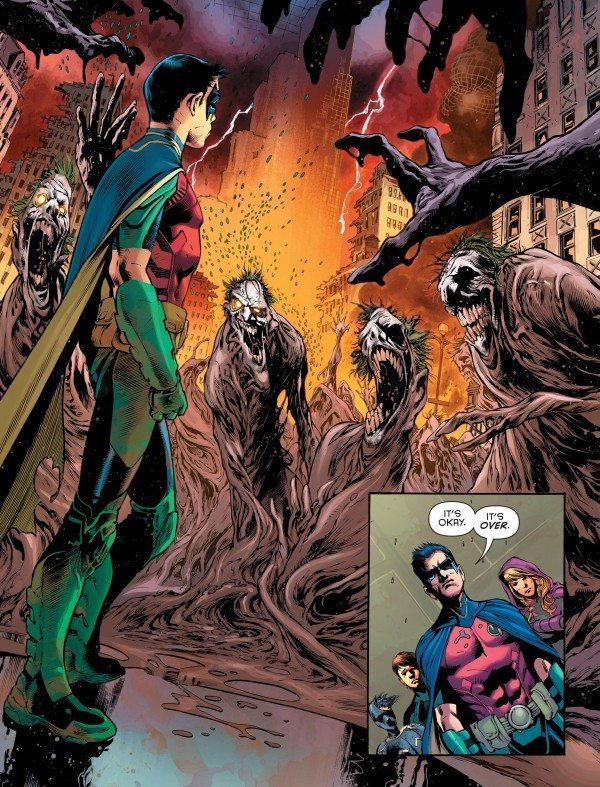 This issue shows us the growth and development of the family as Batwoman pushes the trainees to their limits at the request of Batman. Batman, filling the role of absentee father, has left “raising the kids” to Batwoman while he’s off looking for answers. The heavy exercise seems to drive the new team closer. We get a really cool moment between Tim and Basil, who is really shining in this series, and we also get a return to the old Steph Brown/Tim Drake relationship, which should please fans of the pre-New 52 DC Universe.

The development of this family is only part of the issue. The remainder develops a separate feud. As mentioned briefly before, the Kane and Wayne names are two of the most esteemed in Gotham. For decades, these names have been synonymous with wealth and power, leading to constant competition between the families. We’re given a brief look at this history in issue #935 as Katherine’s father urges her not to continue to help Batman. He insists that the Kanes are an organized family whose strength lies in numbers and order, which has always made them suited for the military. Bruce’s lone-wolf approach to crime-fighting, he says, makes him a dangerous wild card. 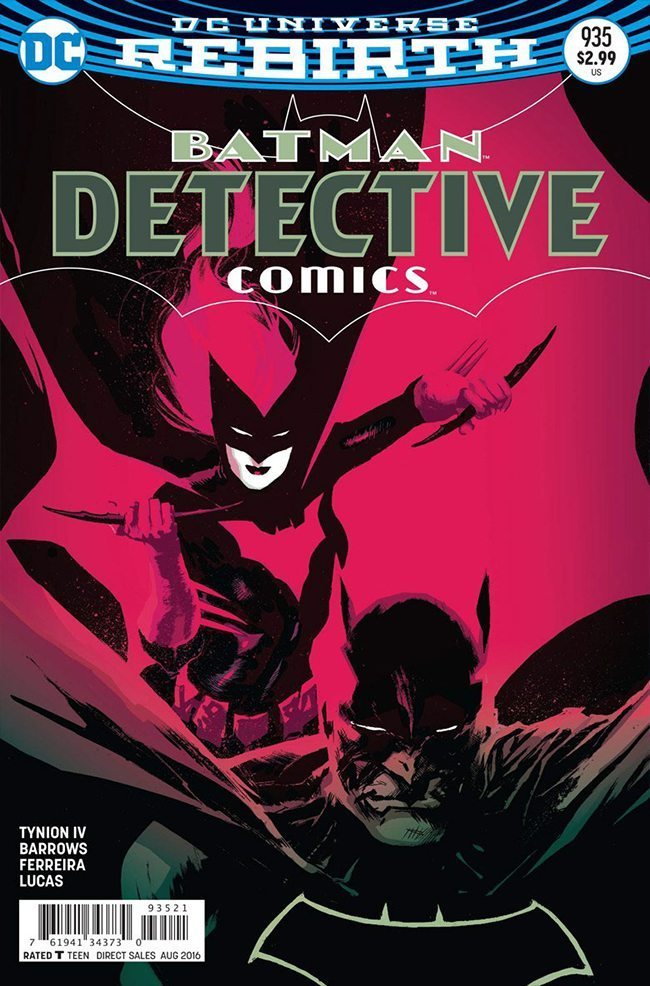 It’s an interesting foil for James Tynion IV to be setting up: Kane vs. Wayne. Military vs. vigilante. Army vs. soldier.

The current story is called “Rise of the Batmen” for a reason: A whole army of Batmen that seems to have some military background has appeared in Gotham. What involvement, if any, the Kanes have in this unit remains unclear (though, with everything that we’ve seen so far, there’s plenty to suggest they have some knowledge). Of course, this could all be some misdirection and distraction from the true villain. We’ll have to see as things unfold.

LISTEN: For an in-depth analysis of Scott Snyder’s run on BATMAN, you can’t miss this podcast!

Beyond the plot and the theme of family that is prevalent in this issue, Tynion nails the characters. Batman maintains his lone-wolf attitude, separating himself from everyone else, and Batwoman’s stubbornness is also apparent. However, the character that stands out the most is Basil Karlo. The reformed villain is not a new character type by any means, but with Basil, we get to see an earnestness that isn’t typically seen in the Batman villains. Of all of Batman’s rogues, Clayface is one that has always seemed to be a bit more sympathetic. He has no evil intentions; rather, he was a creature of fate. To see him coming around and starting to make a change for the positive is a great new direction for the character. Of course, how long he’ll stay on the good side of the tracks is anyone’s guess. In comics, these things never seem to be permanent. 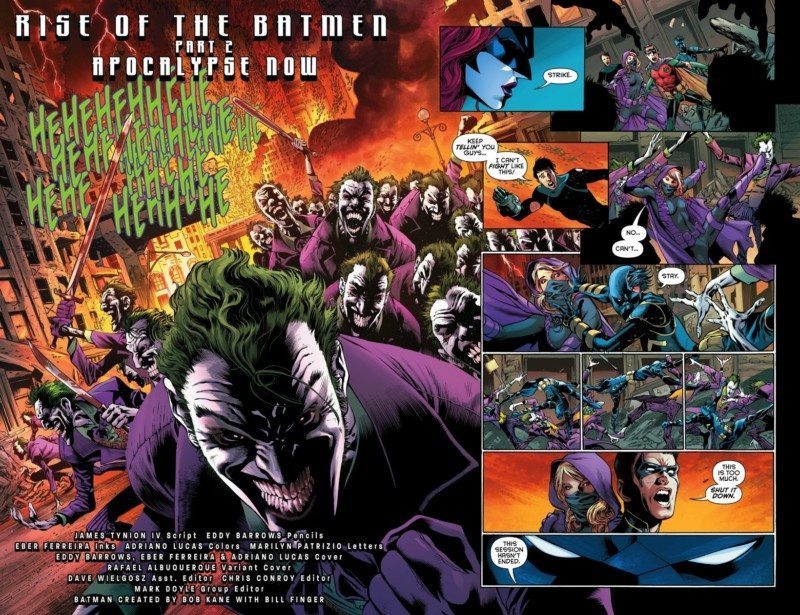 The art team also deserves a shout out for this issue. Eddy Barrows, on pencils, has delivered some action-packed sequences. He’s also proven his expertise with some particularly challenging panels, such as the spontaneous dissolution of several Jokers. Every panel is exciting, whether there’s a simple conversation or a hero is flying through the night sky. The tension is captured and perfected under the inks of Eber Ferreira, giving us some extremely fine detail. One highlight is the Joker close-up on the second page. Of course, the colors make the characters really come to life, and Adriano Lucas lends that perfect bit of magic. Lucas plays with shadow very well, creating suspense and excitement in every moment. It’s a gorgeous book to look at. Any full page spread is worth spending a few minutes soaking in.

LISTEN: For more Batman excitement, check out our podcast on DC’s Holy Trinity!

It’s been proven once again that Batman can be trusted in the hands of James Tynion IV. This team is on a roll here, with back-to-back stellar issues. Make sure you pick up the rest of this storyline to see how this family feud unfolds!