Did I do that right? “BAT-Family ASSEMBLE!” That’s DC right? Any who, DETECTIVE COMICS #934 is an exciting comic to jumpstart the rebirth era. The writer, James T. Tynion IV, has vast experience writing Batman-related books and this issue is proof. Artists, Eber Ferreira and Eddy Barrows, compliment Gotham’s darkness, as well.

READ: What did we think of DC UNIVERSE REBIRTH #1?

Issue #934 may seem like an imposing number, but it’s a completely new arc. All you need to know is who Batman is because the rest is explained for you. The story starts off with Batman battling Azrael but quickly jumps to Batwoman in Gotham. Batman senses something sinister brewing in the cities depths, so he recruits Batwowan to help him co-lead a new team. He introduces her to Stephanie Brown (The Spoiler), Tim Drake (Red Robin), Cassandra Cain (The Orphan), and finally Basil Karlo (Clayface). It’s an extremely interesting new group with differing strengths and weaknesses. This Bat-Family is definitely going to undergo a complex learning curve. 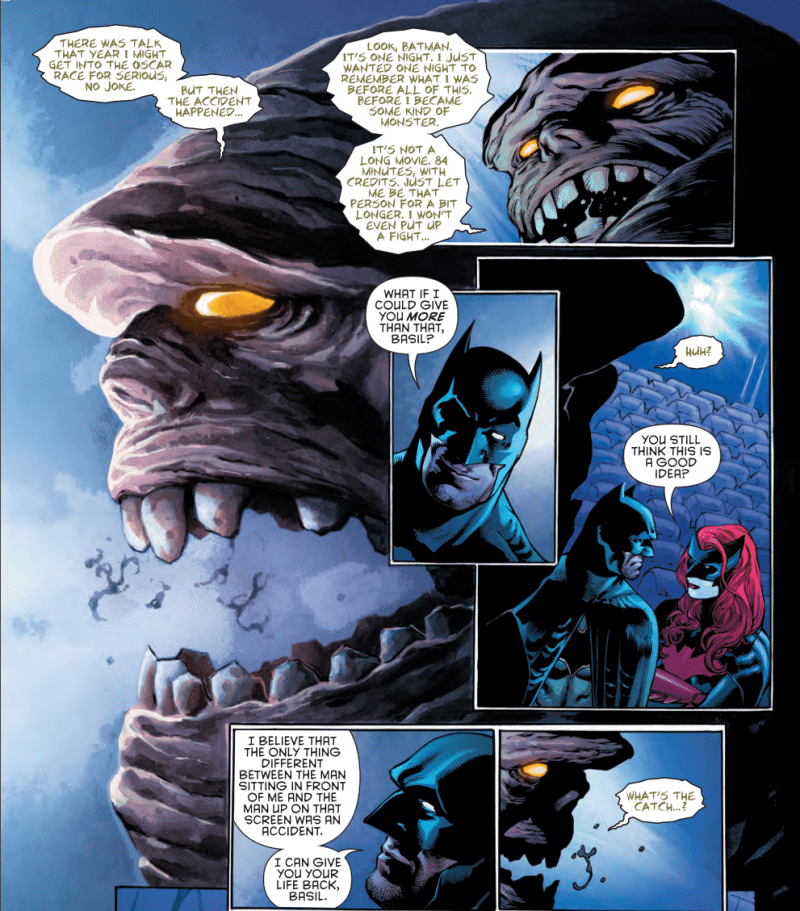 The plot is simple, but it scores big because of the unexpected diversity within the team. There is a ton to look forward too. For instance, how will these personalities clash? Can it last? Will Clayface be able to look past getting healed and be a hero? Also, what’s Batman so afraid of? What’s lurking in Gotham and the future of this book’s team is what makes this issue so exciting. The potential is so high and encouraging. It’s fresh yet authentic to DC comics.

Tynion IV has built a fantastic team, and the strongest characterization comes from Clayface and Batwoman. Most of the other characters in the team we are just told about, which is completely understandable. Future issues will dictate these characters’ traits. What we get to see is the hardboiled ex-military Batwoman take a strong leadership role and Clayface’s immense pain at what he lost in his previous life. The team seems to have a lot of heart but a lot of suggested issues too, particularly Cassandra Cain. The Orphan had a battered, brainwashed upbringing and her power worries Batman, as she could be a major problem if she turns.

The artwork sets the tone for Gotham, the characters, and the series. It’s dark and grimy as it should be. I’d have to say the best piece was Clayface again. It just looked like he took the most attention and looked fantastic for it. Otherwise I’d say everyone else looked good, but the other characters were a little more bland. The background imagery was well done too.

LISTEN: Our DC Holy Trinity Podcast will knock your socks off!

DETECTIVE COMICS #934 is a rebirth comic that is open to everyone. The new Bat-Family is like a new Outsiders group, which adds new wrinkles to future stories and a dynamic that will surely keep the book interesting. The future is bright in dark, grimy Gotham.