In so many science fiction, fantasy, or even romance media, a main character is chosen to be The One. Harry Potter is meant to kill Voldemort. Neo is the one to free everyone from the Matrix. From BUFFY THE VAMPIRE SLAYER to SUPERNATURAL to STAR WARS, this trope is rife in all that we consume. DESTINY, NY vol . 1 asks the question: what happens to all the Chosen Ones if they were teenagers in New York?

DESTINY, NY vol . 1 is the story of a woman who has some troubles we can relate to, and some we can’t. She has issues with her ex, anxiety, and — oh right — a prophecy predicted she would “go into the unseen and remove untouched death.” From then, her life just hasn’t been the same.

Destiny: A University for the Magically Inclined 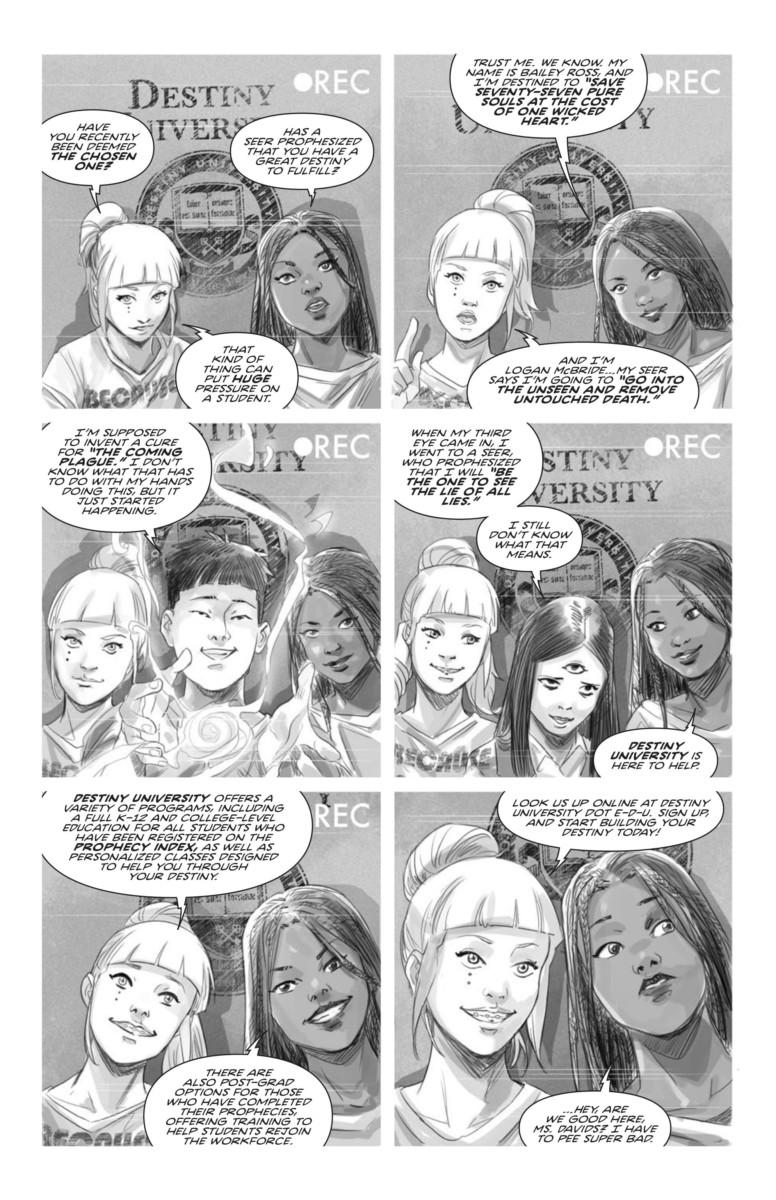 In the world of DESTINY, NY, the “Chosen Ones” attend Destiny University, a school designed to help them conquer their prophecies. It holds an accurate mirror up to real universities, complete with mindless bureaucracy, administration mishaps, and stress during finals. The transition from the reader’s world to this new alternate universe is seamless. Everything feels realistic, even the magic, as strange as that is to say. There are rules, logic, and lore here that make for fantastic magical realism. Kudos to writer Pat Shand for crafting a world so fully-fleshed.

Our main character, Logan McBride, attends this university along with a colorful set of characters. (That’s a pun because the illustrations are in black and white.) There are the students, who anxiously await the day they will have to fulfill their destiny, and there are the seers. The seers are people with blacked out eyes who provide the prophecies for the “Chosen Ones”. Logan is a Chosen One who fulfilled her prophecy much younger than the average student at Destiny. So now, she’s a grad student, still holding onto the past in more ways than one.

When we first see Logan as an adult, she’s distressed about her ex-fiance, Bailey. Seven years ago, they were engaged, and now Bailey’s about to marry someone else. Logan, a very anxious woman, can’t stop thinking about her past mistakes. Thoughts about Bailey run through her head all day, crippling her focus.

That is, until she meets the irresistible Lilith. 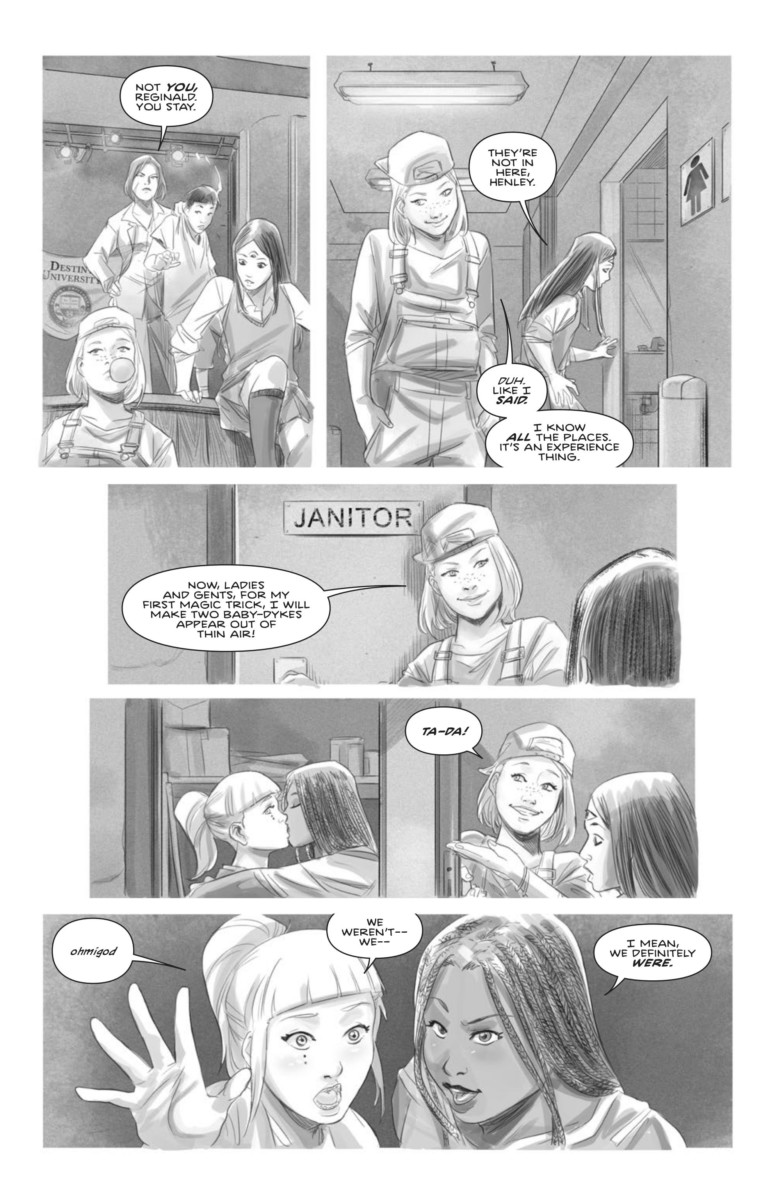 The description for DESTINY, NY vol . 1 on its Kickstarter page is “a graphic novel about two magical ladies in love.” While it’s much more than that, the romance at the heart of this novel will grab you and hold on tight. The chemistry is tangible, the women are beautiful, and when magic is involved, the stakes are high. Lilith and Logan attempt to cultivate love in a world where their past threatens to eat them alive. Their relationship is sweet, sensual, and heartwrenching all at once. And of course, it’s always great to have a lesbian relationship as the main focus.

READ: Want some more LGBTQ+ comics? Check out our article on TREES!

DESTINY, NY vol . 1 is full of queer and diverse characters. It made me so happy to see them on the page and well-treated. These people weren’t there to fulfill some diversity quota — they’re essential to the story and the realism of its setting: New York City. What I thought was particularly poignant was the portrayal of Gia, an overweight student at Destiny University. Not only is she a wonderful, three-dimensional character, but she has her own sexuality. I’ve never seen an overweight person depicted in a positive sexual environment, whether in comics, film, or television. It was powerful and beautiful, just like the rest of DESTINY, NY.

DESTINY, NY vol . 1 Is Something Special 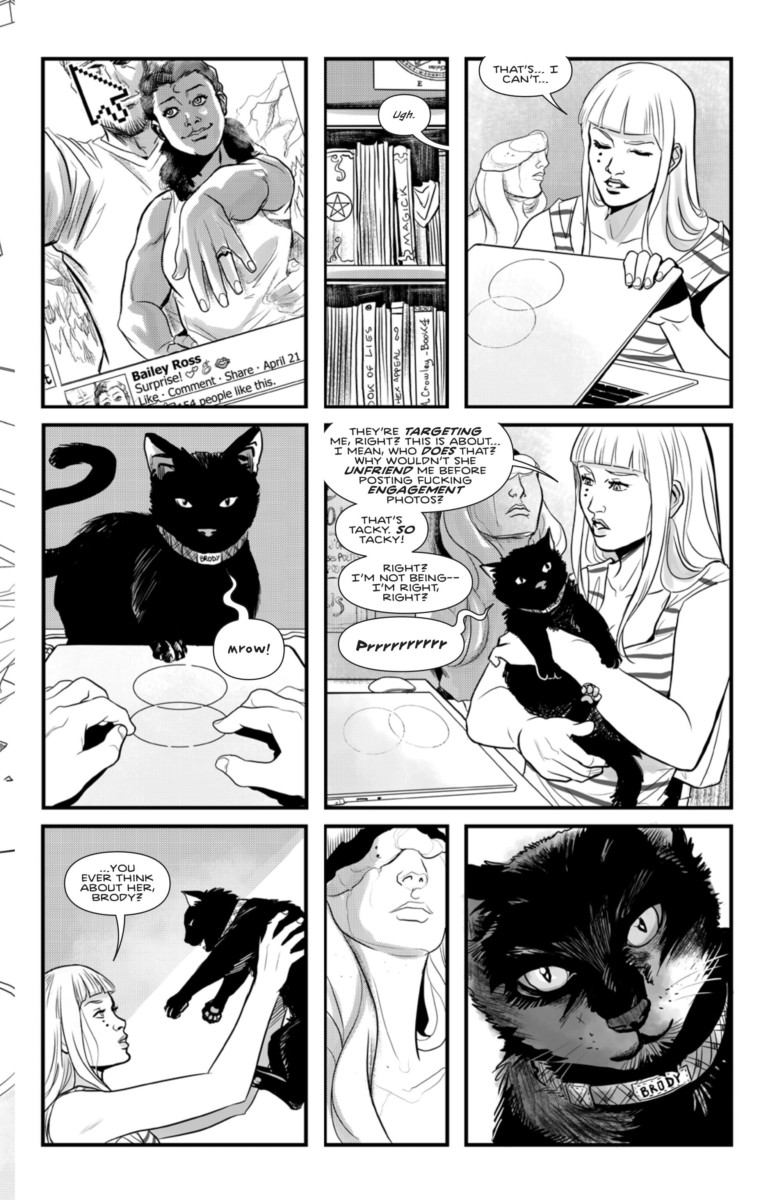 There is so much right with DESTINY, NY vol . 1 in terms of its characters, plot, and worldbuilding. But we can’t forget what makes it a graphic novel instead of just a novel. The art. Illustrator Manuel Preitano crafts a gorgeous story through his own artistic style and talent. The semi-realistic way of drawing reflects the semi-realistic nature of the novel itself. Through this, Preitano develops an atmosphere that fits so well with the writing.The lineart is amazingly smooth, showing dedication and skill from the artist. He also makes good use of the medium, using deft techniques in the panel, gutter, and text.

Though it’s black and white, the art of DESTINY, NY is flawless. You don’t feel that you’re missing anything by the lack of color. The action, characters, and story are all so dynamic that it makes no difference in the consumption of the work.

DESTINY, NY vol . 1 brought me something I didn’t know I needed: an alternate New York City where magic is real, queer people are plentiful, and chosen ones get picked to fulfill their destiny. Well, I guess there already are a lot of queer people in New York City. But here, their stories are front and center. They come in all shapes, sizes, and magical abilities. These folks propel the plot of this new, riveting graphic novel. DESTINY, NY vol . 1 is a page-turning, absolutely precious work of art. There was not a moment where I wasn’t either bursting out in laughter, holding my hand to my heart, or gasping out loud. In short, DESTINY, NY is proof that indie comics can stand their own against big name brands. In fact, they can run right past them.