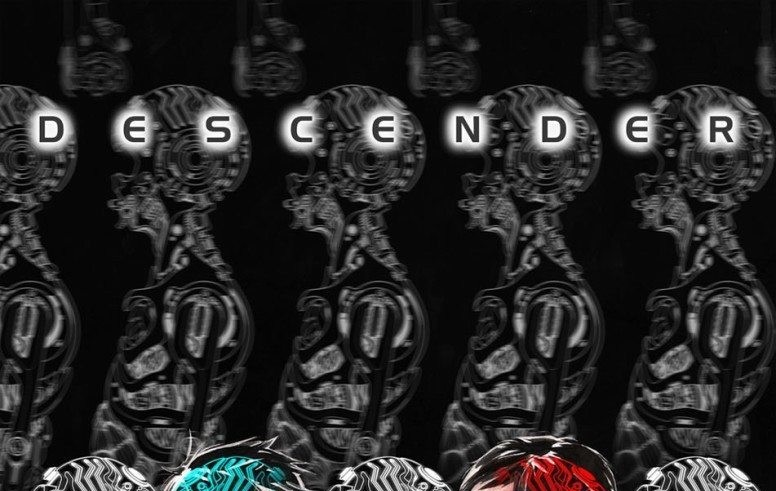 This reviewer has never much identified as a sci-fi nerd before, but Image Comics has successfully changed that with their various titles including LOW, ODY-C, and of course, Jeff Lemire and Dustin Nguyen’s DESCENDER. Having been a fan of Jeff Lemire’s work since his first graphic novel, THE NOBODY (2009),  and critically-acclaimed Vertigo series, SWEET TOOTH (2009-13), one couldn’t help but be intrigued in his continued work and collaborations with other artists on titles such as ALL- NEW HAWKEYE and PLUTONA. While my greatest admiration for creators such as Jeff Lemire is the independence and originality of his writing as well as his illustration, watching his writing come to life at a different artist’s hand is amazing to watch. Dustin Nguyen also succeeds in this particular endeavor for their gorgeous and moving story, DESCENDER.

READ: Looking for another cool Image sci-fi comic? We cover LOW, too. Check out our review of LOW #10!

Jeff Lemire’s writing has never been short of emotional resonance and depth. Any lucky reader who has taken a look at his bibliography could probably surmise that. DESCENDER includes all of the benefits of Jeff Lemire’s simplistic storytelling of a young Artificial Intelligence Boy/Robot who just wants to find his family. DESCENDER is by no means the first story to touch upon the loneliness and isolation in a technological world in which love and care seem moot. It also is not the only story that gives a robot emotional sentience which contributes to the heartbreak of that robot’s hope to assimilate, love and be loved by the people he meets. But it is the only story, that I know of, that uses watercolor as beautifully and organically as Dustin Nguyen does. It is the only story I know of that can so thoroughly and seamlessly weave emotionality, science fiction, and family dynamics in a way that I wouldn’t expect. In essence, DESCENDER is a comforting mix of predictability and beauty. 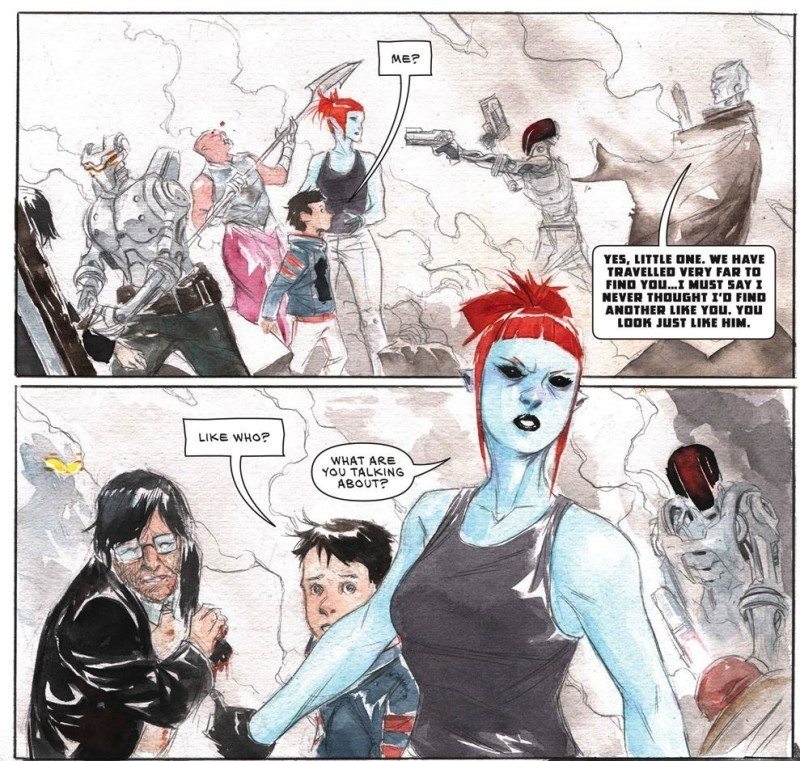 This series is definitely not meant to have shocking revelations and twists at every turn. Although the story continues to keep the reader on their feet for the second story arc, there is a certain level of familiarity in subject matter. The universe Jeff Lemire and Dustin Nguyen create is one of a classic sci-fi aesthetic. They have created a populated space in which humans have robot and alien companions and peers. This is the stereotypical permutation of what we think our future leads to.

To briefly summarize the first volume and first story arc, we meet Jin Quon, deemed the father of robotics in this universe (we all know where this is going…) being called upon when a series of destructive robots called Harvesters appear over major cities on the planet of Niyrata, almost destroying everything before disappearing. As the story progresses, we learn that robots, like humans, have a form of DNA in the form of a codex. Meaning, if one can decipher or study the codex shared by a robot and the Harvester, one could potentially understand how a Harvester is constructed and destroyed. Knowing this, we are introduced to Tim-21, supposedly the last existing human companion android designed by Dr. Quon, on a destroyed mining colony. The first arc follows Tim-21 on his journey to find whatever existing family he has left after the destruction left by the Harvesters, encountering the government likes of United Galactic Council, junkers looking for an extra buck, and other robot entities who may prove to be more “human” than the population they are meant to protect and serve. 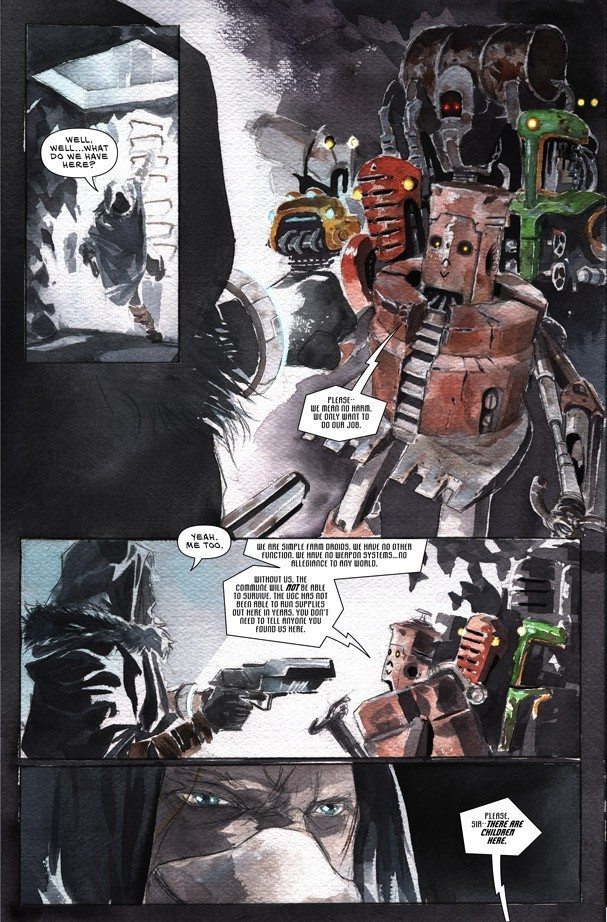 For the sake of spoilers, I won’t let on into any more details in the narrative. What I will say is that Jeff Lemire and Dustin Nguyen takes a classic sci-fi ideology and blur the lines between humanity/technology and progress/dominion so beautifully in DESCENDER. While, admittedly, at times you can easily compare this series to the Spielberg film, Artificial Intelligence (2001) – which in turn was based on 1969 short story with similar themes –Dustin Nguyen’s watercolors bring what could be a cold and harsh technological world into a bright, colorful and organic light. Glancing at extraterrestrial life and the future of technology with human nature and culture being used as the magnifying glass is not at all new. So for some, DESCENDER might not be the story for you. However, if you’re at all intrigued by the leading question, “what makes a human human?” this series will take you across the galaxy and back, following the sensitive but steadfast Tim-21.

READ: Image Comics fan? Check out what we have to say about a new Image series with our review of THE GODDAMNED #1!

The seventh issue starts off from where volume one ends with Tim-21 and a band of new friends, in peril and with a dark confession at Dr. Quon’s admission, only to be interrupted by a band of rebel robots.

I’m sure that many of us are familiar with the concept of “robots fighting back” against humanity (*cough*Will Smith’s i, Robot *cough*). But what pulls DESCENDER aside from the other narratives is that the robots are not only fighting back as a representation of man’s folly in creation, but as sentient beings that want to be recognized as equals. In fact, they fight for their own right to exist. In the face of these rebels, Tim-21 turns down their offer due to their rejection of the human and alien friends he associates with. He chooses what emotionally resonates with him versus a safe haven for those of his own kind. In many ways, Tim-21 is the not only the most human despite his android origins but also very much a child who doesn’t understand why love and care for all do not hold more priority over the politics and destruction amongst members of the UGC, terrorists, and robots. Strangely enough, Jeff Lemire has effectively created a character of child-like naivety in a companion android with many friends – human, alien and robot – who all exhibit very “human” qualities and personalities. In fact, instead of seeing the story as an allegory of Man’s progression in Creation and being “God-like”, the story treats the differences like race and belief systems. 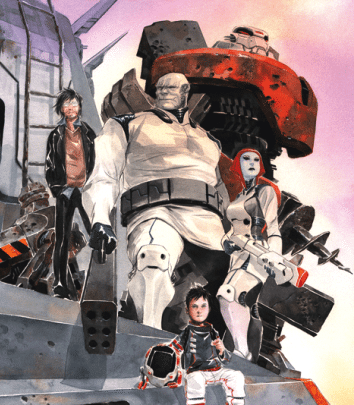 I can’t help but remember the themes and motifs of Mary Shelley’s Frankenstein while reviewing DESCENDER’s run so far. Do I think that DESCENDER is the next literary classic? Perhaps not. Can I see how elements of it feel a bit been there, done that? Sure. But my main point is that my continued devotion to this series has to do with the fact of its sincerity. Jeff Lemire’s emotion and Dustin Nguyen’s expressive yet detailed art work serves as an interesting juxtaposition to what I normally associate with space and technology. All the loneliness and cold elements still exist, but are tempered with Tim-21’s character – as well as the characterizations of the other characters – coupled with Dustin Nguyen’s masterful artistry. While the story can have predictable twists and turns, this reviewer sticks around because she cares. And what else are good stories for?