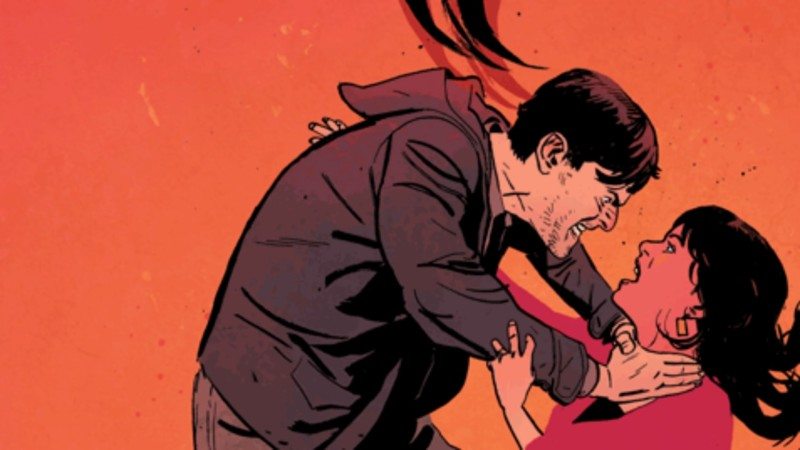 Written by Robert Kirkman of THE WALKING DEAD fame, OUTCAST follows Kyle Barnes, a man still recovering from the trauma of his mother’s possession. Believing Kyle played a role in his mother’s exorcism, Reverend Anderson seeks out Kyle’s help when a local boy begins to show signs of demonic possession. As the two begin to explore Kyle’s ability to perform exorcisms, they realize that their town’s demon problem is much larger than they originally thought.

OUTCAST is largely devoid of the imagery that we have come to associate with pop culture’s depictions of demonic possession. There is little levitation, no crawling on the ceiling, and certainly no anatomically impossible head turning. Again and again the protagonists, Kyle Barnes and Reverend Anderson, physically assault men, women, and children while performing exorcisms, and OUTCAST’s tendency towards realism makes artist Paul Azaceta’s violent visuals all the more disturbing. 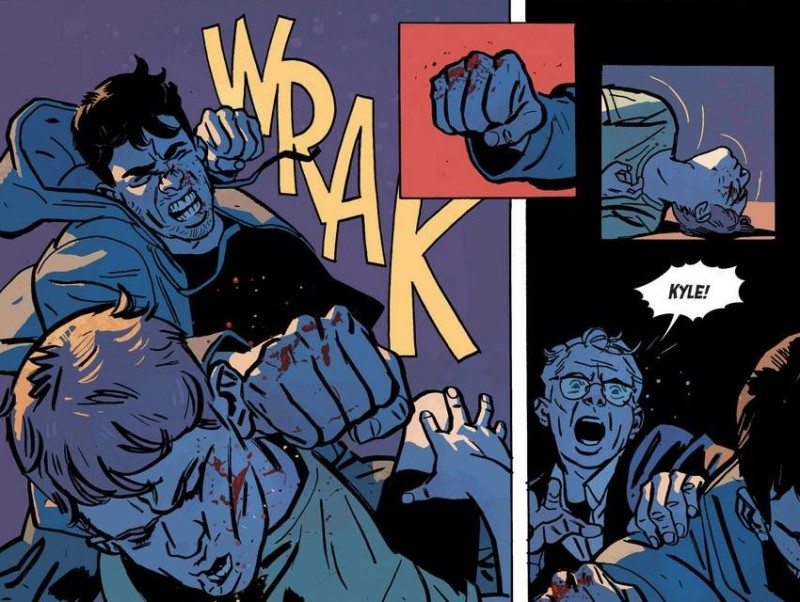 Exorcism is a controversial topic independent of OUTCAST. Demonic possession has been used to explain physical and behavioral anomalies that could not be explained by contemporary doctors. As society’s understanding of mental and physical health has increased, the likeliness that someone’s ailments would be chalked up to demons has decreased. In the first several issues of OUTCAST, Kyle expresses doubt that the people they are exorcising are actually possessed, making their violence all the more troublesome. Robert Kirkman includes this doubt as part of Kyle’s character arc in order to acknowledge the reader’s own skepticism in light of the problematic history of so-called exorcisms.

READ: Can’t get enough of Robert Kirkman? Read our review of the latest issue of THE WALKING DEAD!

The controversial nature of exorcisms is nodded to over and over again, beginning with the exorcism of Kyle’s mother. His mother becomes violent and neglectful seemingly out of nowhere. The disorder of their home and her emaciated body demonstrate that she has lost all ability to care for herself and her son. From a logical standpoint, we would assume that his mother was suffering from a severe mental illness or possibly a drug problem. Realistically, she would be hospitalized or sent to a rehabilitation center instead of being exorcised.

In the world Kirkman and Azaceta have created, possession is quickly established as a plausible explanation for abusive behavior. Not only do the possessed act out violently, but their possession justifies a violent exorcism. Kyle comes to terms with his abuse only after he realizes that his mother was possessed, not mentally ill. He is able to absolve his mother of fault on the grounds that she was a victim of possession and had no control over her actions. 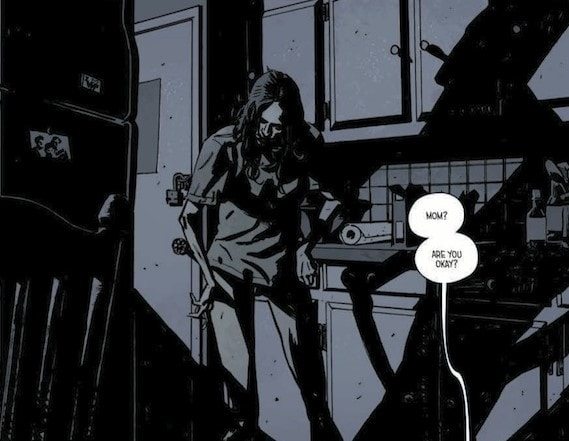 Whether or not the reader believes demonic possession is plausible, it is undeniable that in most violent circumstances, the perceived abuser is a victim as well. If Kyle’s mother had been mentally ill or had a drug problem, she would still be a victim. In the real world, healthy adults from happy upbringings very rarely become physically abusive out of nowhere. Abuse is often linked to drug addiction, mental illness, intergenerational abuse, or a combination of these circumstances. In OUTCAST, both Robert Kirkman and Paul Azaceta seem to be alluding to these horrors with how they choose to portray possession.

The emaciated state and unpredictable behavior of Kyle’s mother are not the only strong allusions to drug addiction within OUTCAST. In #18, “There Is No Escape,” a newly possessed Chief Brian Giles is brought by his wife to a house occupied by the possessed. Brian is then led into a dark room filled with others going through the thralls of initial possession. 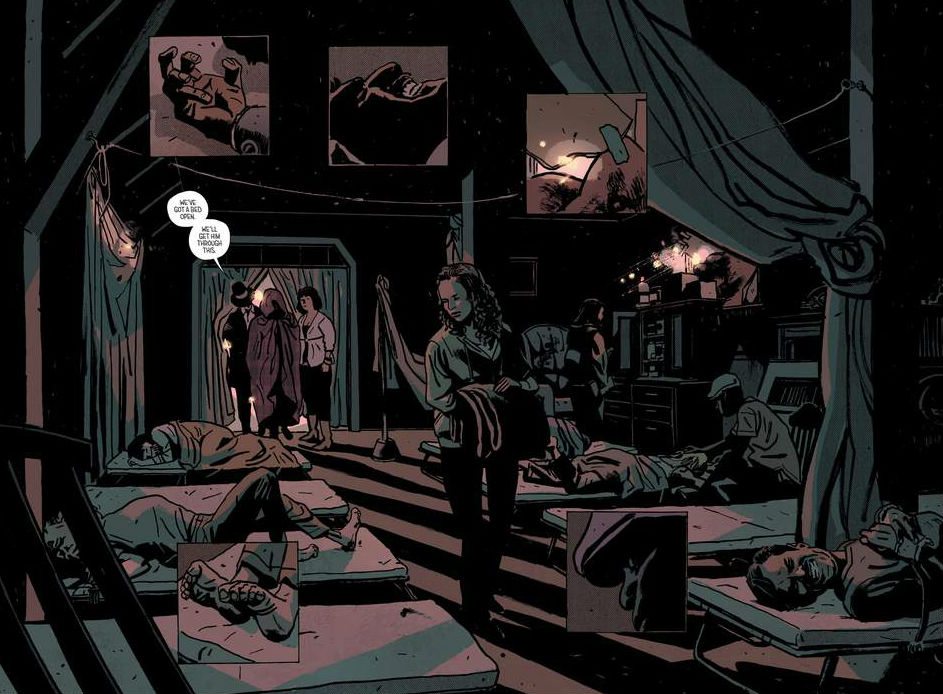 This setting is reminiscent of some kind of drug den. Furthermore, the entire experience of possession is similar to drug addiction. Indicators of possession in OUTCAST include hypersensitivity to light, sound, and touch. Interestingly, these symptoms are similar to those experienced by addicts going through withdrawal. These physical afflictions become less intense until the person is able to return to their lives like nothing has happened. It becomes impossible to tell who may be possessed, just like it is impossible to tell who is suffering from drug dependency.

OUTCAST’s setting of small town West Virginia, one of many areas of the country that has become associated with the epidemic of opioid addiction, further implies that this allusion to addiction is not accidental. The outbreak of possession in the town is similar to how a drug epidemic might spread. Although there appears to be nothing wrong on the surface, a war is waged behind closed doors. Furthermore, Reverend Anderson realizes that some of the exorcisms he has performed on people in the past may not have worked. He revisits these people to find that many are still possessed as if they had relapsed. Just like rehab might not address the cause of someone’s drug addiction, an exorcism might not address the cause of a person’s possession. An addict might go through rehab and no longer be physically addicted to a drug. However, after returning to their everyday life and the circumstances that caused them to take drugs in the first place, they relapse back into their addiction.

Domestic abuse also plays a prominent role in OUTCAST’s narrative. The reader is shown in flashbacks that Kyle’s estranged wife, Allison, tried to kill their daughter while possessed. To protect their daughter, Kyle performs a violent exorcism on his wife. Allison wakes up in the hospital not being able to recall any of this. She logically assumes that Kyle has unjustifiably assaulted both her and their daughter, causing the couple to split.

In Issue #16:, “Overwhelmed,” Kyle attempts to convince Allison that possession is ultimately responsible for their troubles. He states that she should know he would never harm someone he loves so much. This is exactly the kind of language that coerces survivors of domestic violence to allow their abusers back into their lives over and over again. The abuser promises that they will change their behavior and that life will be perfect if the victim will just give them another chance. Although we know Kyle assaulted his wife to save his daughter, this exchange is intentionally suggestive of the cycle of domestic abuse.

The cycle is also alluded to when Kyle’s brother-in-law, Mark, is hospitalized after the exorcism of Kyle’s adoptive sister, Megan. In #15, “All Alone Now,” Megan is unable to give the police a satisfying explanation for her and Mark’s injuries. The police are helpless to change what they undoubtedly suspect is an abusive situation since there are no witnesses. Police officers can visit a household over and over again to break up domestic disputes but might ultimately be unable to prevent future incidents. If the victim is unwilling to cooperate with the police and leave their abuser, there is little the police can do. Like Kyle and Allison’s situation, Mark and Megan’s relationship is not abusive in the context of the story. However, given the prominence of themes of abuse in OUTCAST, these small exchanges that hint at abuse are purposeful.

Kirkman and Azaceta actively draw from the language and imagery of abuse to characterize possession in OUTCAST. However, drawing a parallel between possession and abusive behavior could quickly become problematic outside of a fictional context. Within the universe of the comic, the possessed may well be truly incapable of controlling their actions. Like Kyle’s mother, the actions of the possessed are forgiven because they are helpless to resist the will of the evil entity inside them. The same could be said for real life abusers since they too are often victims of uncontrollable circumstances: drug addiction, mental illness, or prior abuse. But if real life abusers are victims too, should they be held accountable for their behavior?

Fortunately, Robert Kirkman answers this question for us by creating a character that should be held wholly responsible for the damage they’ve inflicted on others. The only abuse within OUTCAST that is not linked to possession is Megan’s sexual abuse at the hands of her foster-brother, Donnie. Although Megan refuses to accept his apology, she is still angered when she finds out that Mark assaulted him. On some level, Megan understands that Donnie is not evil but, instead, a victim of circumstance. It is likely that Donnie suffered abuse at some point during his time as a child in the foster care system, and although Megan sees the tragic context of Donnie’s abusive behavior, she justifiably believes that what he has done is unforgivable.

READ: Calling all horror lovers! Click for 5 horror comics to get you through Halloween!

Donnie, ultimately, solves the problematic nature of comparing abusers to people who are possessed. Yes, both groups may not be completely responsible for the situations in which they find themselves, but in the real world, that’s not a valid excuse to hurt people. The world has not been kind to Donnie, but that does not make his behavior any less deplorable.

More importantly, Donnie is not characterized as a total monster; he is humanized by Megan’s mercy. Megan recognizes that her husband’s violence towards Donnie is not productive. She is still angry, but does not want revenge on her former abuser; she hopes to move on from the situation.

Megan’s attitude towards Donnie plays a role in our understanding of OUTCAST’s universe. The universe of OUTCAST is one in which the human spirit is infinitely redeemable. Just like how Megan is able to build a life after her experience with abuse, so are Donnie and the score of characters that have had run-ins with possession. There is an understanding that people who commit evil actions are not necessarily evil people. Essentially, this is the message that Kirkman and Azaceta are alluding to with their references to realistic abuse.

Even in the real world, it can be argued that the root of evil is almost always external. Although demonic possession may not be real, drug addiction, mental illness, and prior abuse can often be identified as the cause of a person’s evil behavior. This characterizes evil as something separate from a person’s core identity. Just like the possessed can be exorcised, those that commit abuse can address the root of their harmful behavior through rehabilitation. Abusers must be held accountable for the damage they inflict, but their abusive actions do not make them irredeemable. The world of OUTCAST is one in which people are capable of conquering circumstances that are out of their control, a world that might not be that different from our own.

OUTCAST #22: “The Ticking Clock” releases on October 26, 2016. Let us know in the comments what you think, and if you’re going to pick up the next issue!