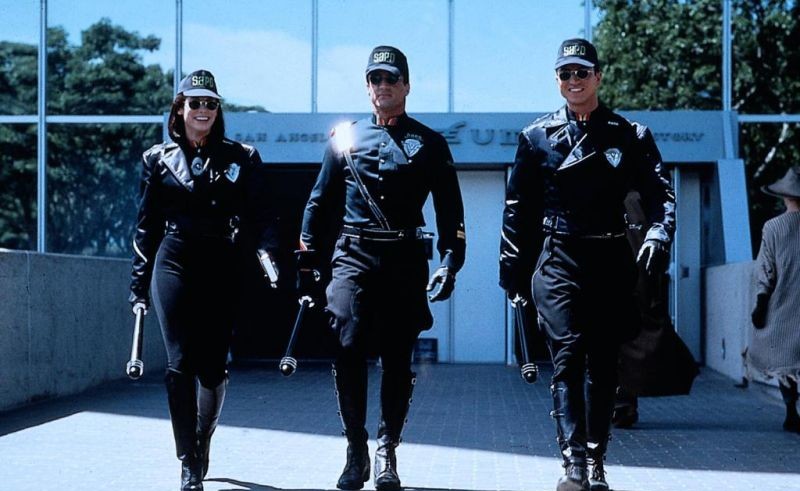 Have you ever watched an old movie that was so corny, so cliche, so wrapped up in the culture of its own decade that it transcends its own time and actually became enjoyable to watch? You know, those cheesy black and white romance films, those over the top John Wu flicks from the ’90s, all those B-movies from yesteryear that have become unintentional comedies? It’s fun to look back on the silliness of previous generations or to look back nostalgically at the cliches of our youth.

But every now and then you find a “bad” movie that not only aged well but is actually more poignant now than it was originally intended to be. For me, that movie is DEMOLITION MAN.

When DEMOLITION MAN first released, it was met with polarizing reviews. It tells the story of an ultra-violent, early ’90s action hero who finds himself in a politically correct, futuristic “utopia.” Spicy food is banned, swearing gets you fined, sex is completely virtual, and the radio plays nothing but children’s jingles. When it came out, people couldn’t tell if it was clever satire slipped into a dumb movie, or a dumb movie trying to be clever satire. Nevertheless, it’s become a cult classic, in part because it was ahead of its time.

Above everything else, DEMOLITION MAN is a movie about the future of human culture, and many of the issues presented in the movie are happening right now on the internet. Whatever your thoughts on the movie itself, it’s clear this film is more relevant now than it’s ever been.

So how does DEMOLITION MAN relate to our internet culture? How can a 20-year-old movie tell us anything about the modern world? Why should we care? Well, let’s take a look!

Every piece of world-building in this movie feels like an absurd parody of modern internet culture. The most well-known example is the 3 seashells joke, which quickly became a meme. Like most things in the movie, this was something that was considered humorous by some but confusing and awkward to others. It wasn’t until much later that this sort of joke became commonplace: bizarre, nonsensical, gross, and posing more questions than answers. Sounds like an internet meme to me.

But the satire goes deeper than that. DEMOLITION MAN is a perfect parody of our current culture, a story about our conflicting viewpoints clashing with one another. Modern culture is being driven by the internet, so what better place to find extreme, irrational points of view than online? I could illustrate this point by picking any two websites, but for now, let’s narrow it down to two obvious extremes: 4chan, and Tumblr.

Both of these sites create an extreme environment and an echo chamber that reinforces it. Tumblr is a place where tolerance is taken to intolerant extremes, where differences of opinion are considered offensive, and any form of criticism is a “trigger.” Meanwhile, 4chan (summed up perfectly in this NSFW image) is the opposite extreme, an anarchic cesspool of offensiveness, using freedom of speech as a shield to insulate itself from criticism. Ironically, when confronted by this, 4chan’s users tend to get just as offended as the “overly-sensitive” SJWs they love to offend.

READ: The role of political correctness and shock humor in comedy.

Whether the film was predicting the future or not, DEMOLITION MAN tells the story of a world run by Tumblr, and under assault by 4chan.

In the movie, the city is divided between the clean, sterile, childlike nanny-state on the surface and the anarchic terrorists that live in the sewers. Those on the surface are forbidden from doing anything that might be considered offensive, unhealthy, or impolite but hypocritically treat our main character like a social pariah because of his upbringing in the violent past. Those in the sewer are less pretentious but are living in filth, eating rat-burgers and dream of a future with no laws or social regulations. The people in charge of the surface refuse to allow these “terrorists” to live and are willing to break their own moral code to kill them.

This is our current internet culture taken to the extreme. Everyone is trying to push a fringe agenda on everyone else, yet they abandon their beliefs whenever it’s convenient for them. How often have we seen people respond to bigotry with even more bigotry? How often have we seen “free-speech advocates” flip out when someone criticizes their behavior? When does tolerance become intolerance? When does freedom of speech become freedom from consequences? These are some of the most important social questions of our generation, both on the internet and in real life. DEMOLITION MAN was posing these questions decades in advance.

READ: Why do we love nostalgia so much?

So, let’s assume for a moment that DEMOLITION MAN, intentionally or not, predicted the future of human culture. What can we learn from all this?

What really stands out about this movie is that neither side is portrayed as the “good guy”. Neither of these cultures can function without its opposite destroying it. A pacifistic, heavily-censored, politically correct society would crumble at the first sign of dissent. An anarchic, offensive, contrarian society would immediately be overthrown by people wanting safety, community, respect, and order. Neither society can work, neither society is “right.” The 4Chans of the world are deluding themselves just as much as the Tumberlinas. It may be easier said than done, but the solution to our internet culture war can be summed up by the final speech of the movie, told by the great philosopher Sylvester Stalone:

“I’m gonna tell you what you’re gonna do: Why don’t you get a little dirty, you a lot clean, and somewhere in the middle…I don’t know. You’ll figure it out”.