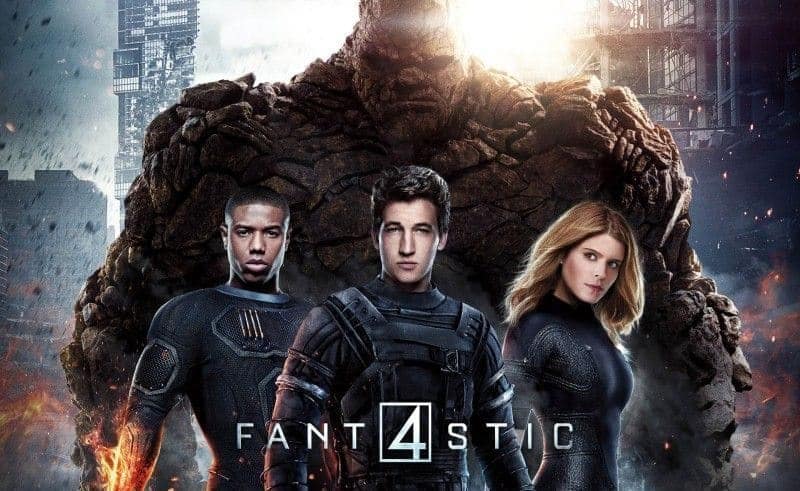 Why the FANTASTIC FOUR reboot doesn’t deserve 9% on RottenTomatoes!

Fox’s attempt to reboot the franchise centered on Marvel’s First Family will probably go down in history as one of the biggest flops amongst superhero movies. Not only did FANTASTIC FOUR only make $11.3 million on its initial Friday at the box office, it also got crushed by critics, receiving only 9% positive reviews on RottenTomatoes (which, by the way, is an even worse rating than the god-awful BATMAN AND ROBIN got). But is it really that bad? Both I and Justin don’t really think so and thought the movie was enjoyable, at least to a certain degree. So here’s my personal advocacy to one of the most hated films in the last few years!

CHECK OUT JUSTIN’S THOUGHTS ON THE FILM! 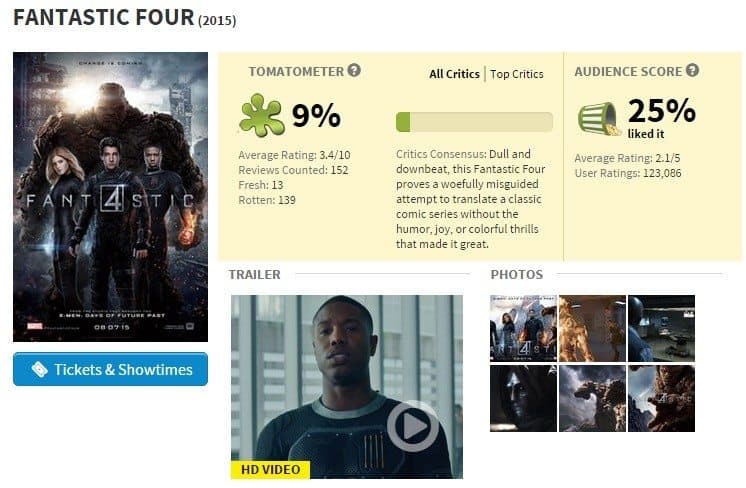 A different attempt at the world of the Fantastic Four!

FANTASTIC FOUR begins in a classroom, 8 years ago. Little Reed Richards tells his classmates about his plans about teleportation, and the only person in the room taking his words for granted is… Ben Grimm. During the first 15 minutes, I immediately felt reminded of the ULTIMATE FANTASTIC FOUR books: the characters are introduced in a very similar way, and the atmosphere is very similar to the comic book counterpart. Keeping the reboot so close to the modernized version of the team is, in my opinion, a very smart thing to do, since that comic book really managed to modernize the world of the FF: it made them younger, gave them a different origin story and generally changed the tone of the books: this adolescent version of the team is less of a “family” and more of a group of young people.

Which is what many people disliked about FANTASTIC FOUR: it wasn’t colorful or joyful enough, and the characters weren’t really a family. Which is, in my opinion, due to the Nolanisation and to the fact that these characters are way younger than the characters in the 2005 movie were. However, when it comes to the darker tone of this movie, I don’t really see a problem with that. The last two FF movies tried to be joyful and funny but ended up being silly and cheesy, so this different attempt is a logical step from Fox’s perspective. And it made the movie extremely enjoyable for me, especially because it makes the scenario more realistic. Of course the characters would be horrified by the way their bodies changed. Of course the military would try to use them for their own questionable causes.

But we also have to accept the fact that FANTASTIC FOUR is an origin story. The characters just find together as a team in the end of the film. Them acting as a real family, making jokes about each other with the team we’ve seen in the comic is probably what we would have seen in the sequel – which will most likely never be made now. And the fact that FANTASTIC FOUR took so much time to tell the origin story of the team made people think of it as “pointless” or “just a collection of random scenes that have nothing to do with each other” because they felt a lack of tension.

But quite the opposite is the case. For example, a leitmotif that runs through the entire movie is the relationship between Ben and Reed. I would even argue that this is the most important motif, and the conflict between these characters is portrayed in a very dramatic way (supported by the great score!), even though the way it was resolved was kind of weird (which generally is a problem this movie has: conflicts are just resolved by the fact that they’re never mentioned again). And, if you give FANTASTIC FOUR a chance, you can see that it’s just not as fast paced as superhero movies usually are and instead has a very dense atmosphere, taking its time to tell a story. Something similar happened to MOCKINGJAY, PART 1, which was criticized for not having enough action scenes and a too slow pacing. 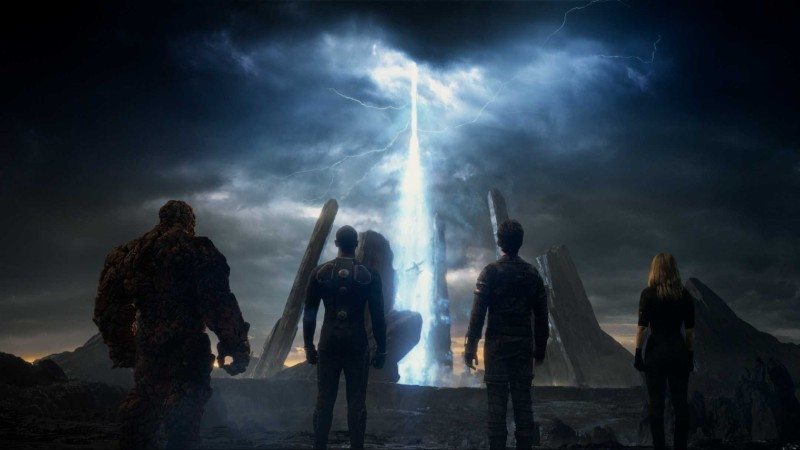 Though the CGI may not always be perfect, I enjoyed the imagery of the film, especially in the parallel world/ “Planet Zero”. It really helped build up tension and develop the darker atmosphere of the film. And the character design is so much better than in all the FF movies so far! Each of their powers were extremely fun to watch!

Which brings me to the characters and the character interaction during the film. All things considered, I have to say I enjoyed both. There were some cheesy lines, but a lot of heart and great actors as well. I think almost all actors did a great job at showing the potential of their characters, and there was a lot of great interaction between Reed and Ben, as well as between the siblings. Unfortunately, there wasn’t that much team interaction, but, again, that’s due to the fact that the team came together at the very end of the movie. Black Johnny Storm was, as I expected, not an issue at all. It didn’t bring a debate about racism to the movie or anything like that, and they could literally have the same role played by a white actor and it wouldn’t have made any difference whatsoever. But people often complained about the way the four main characters were portrayed, saying that “these are not the characters I love from the comics”. I really think we’ll have to keep in mind that the young people we see in this film are more based off the Ultimate versions of the characters. 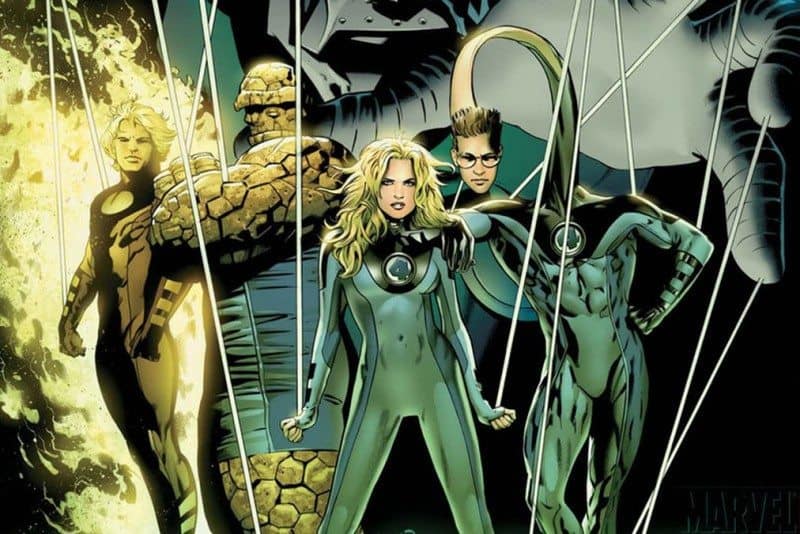 READ: MY THOUGHTS ON THE BLACK JOHNNY STORM CONTROVERSY!

The lack of action…

When it comes to the character of Doom, I actually liked what they did to him. Despite what people were expecting, they didn’t turn him into a hacker (according to interviews, that was rewritten after the social media outcry). Instead, they turned him into something extremely powerful and menacing that really impressed me, and I wish they would have gone a little bit more in detail when it comes to exploring his character’s motivations. 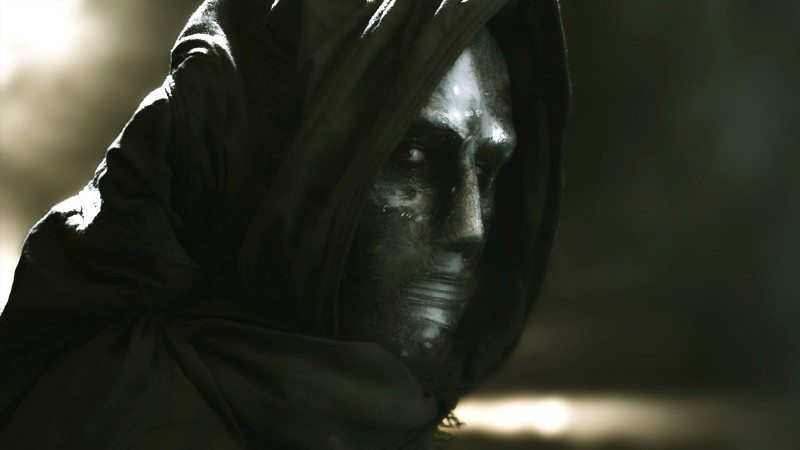 The movie really lacked action scenes in general, but the ones it had, I really liked. I loved how they finally made Reed’s power cool, and I enjoyed the fact that Sue was able to kick ass almost immediately with her powers. It was a great idea to implement a time skip so the characters would already know how to deal with their powers. However, generally speaking, I would say that they did extremely well with the character of Susan Storm in this movie, especially since they portrayed a smarter version of the character and don’t just characterize her by her relationship with Reed.

But please don’t get me wrong. I’m aware that this movie has many problems and flaws. There’s way too much introduction, barely any plot, just around 3 different locations, the ending feels extremely rushed, some lines of dialogue are a bit cheesy, there’s not enough Fantastic Four in FANTASTIC FOUR, the whole thing is at least 40 minutes too short and there’s not really a second act. Also, I hated the fact that the reason they got their powers was just straight up ALCOHOL.

Still, so many things made this flick watchable, enjoyable even! And it definitely doesn’t deserve 9% on RottenTomatoes! For me, the negative reactions towards this movie are a perfect example of people hating something just because it deviates from the norm.

But what do you think?

READ: MORE ABOUT THE FANTASTIC FOUR!