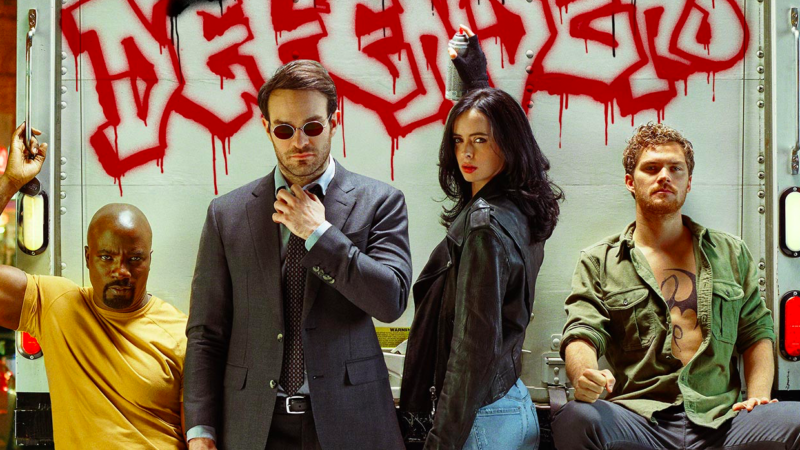 It’s finally here — the long-awaited, action-packed Marvel and Netflix DEFENDERS trailer! Fans of the DAREDEVIL, JESSICA JONES, LUKE CAGE, and IRON FIST can rejoice for more screen time from and interactions between their favorite street-level heroes. For newcomers, the trailer does a good job of luring in those unfamiliar with one or all of these characters.

The trailer starts off in a setting familiar for every member of the team — an interrogation room — where we find Misty Knight questioning Jessica Jones for tampering with evidence and accidentally getting a lead killed. Luckily, Matt Murdock comes to her aid, claiming to be her attorney, despite her knowing nothing about him. This implies Matt returned to the world of law after the disbandment of Nelson & Murdock, resuming the role of helping those in need and barging into interrogation rooms like old times on DAREDEVIL.

You will find Luke Cage going back to the one person who never lost faith in him — Claire Temple. While she wonders how Luke can go back to a normal life after being donned “Harlem’s Hero,” Luke has one goal in mind — to keep people safe. Conveniently, Claire is also the one person who knows each of the Defenders, who all feel the same way Luke Cage feels about keeping people safe.

Perhaps the one thing all of the Defenders have most in common happens to be an extensive fight in a tight hallway. Man, does this trailer tease us what happens when they all team up in the same hallway!

Marvel’s DEFENDERS Trailer: You’re Apart of a Bigger World, You Just Don’t Know it Yet

“I think there’s someone you should meet.” Thank. You. Claire! After several seasons and shows, Claire finally decides it’s time to get the enhanced people in her life to meet and stop an organization two of them fought individually. This is essentially Claire’s Nick Fury moment, the moment she finally brings the members of The Defenders together, the moment —

… where Danny and Luke immediately fight? Alright, perhaps a slight misunderstanding until Claire clarifies that they’re on the same side?

Finally, we can imagine after this Claire will begin assembling the rest of the Defenders to help take down a larger threat posed by Sigourney Weaver‘s unnamed villain, possibly someone associated with the Hand.

THE DEFENDERS wastes no time in harkening back to the previous Marvel-Netflix Originals. For starters, from LUKE CAGE we see the return of Misty Knight and the budding relationship between Luke and Claire. IRON FIST brings Colleen with Danny, and presumably the fight against the Hand. DAREDEVIL seems to have the strongest tether to the plot of THE DEFENDERS. After all, it is the show that started it all. DAREDEVIL brings us Stick, who we’ll likely see as an ally of the team in the fight against the Hand.

We also continue Elektra’s plotline from DAREDEVIL SEASON 2 as the Black Hand, now evil having been resurrected by the Hand. With this, we can also tie into IRON FIST, with how the Hand also brought Harold Meachum.

It’ll be awesome to see how each of these shows will weave together with one another and how all the plotlines finally connect. Three years and five seasons worth of stories leading up to this definitely left fans hyped. It sounds as if these connections might lead to a downfall for the team, however, as Sigourney Weaver’s character tells them, “the more connections you have, the easier it will be to break you.” What’s even better, is the mystery that surrounds her and how she connects to the Defenders.

Come As You Are

And of course, the trailer wouldn’t be complete without Stick setting up some quick exposition snarkily describing each of the Defenders schticks like “the smart-ass detective,” or the “righteous ex-con.” For those unfamiliar with specific characters or who’ve only seen a few of the lead-up shows, it might draw them in to watch the rest of them. Someone who only watched DAREDEVIL might not have an interest in a show about a “kid with a glowing fist.” Stick even further pushes this, as he tells the Defenders they need “to get their shit together,” something he might tell anyone watching who hasn’t caught up on these shows.

The brushing up doesn’t end there though, as Danny subsequently describes his teammates’ powers as proof for why they’re an awesome team. “A blind ninja,” “bulletproof,” and whatever it is Jessica does make one last piece of exposition in the DEFENDERS trailer to help draw anyone else in.

THE DEFENDERS Trailer Gets the Whedon Treatment

I kid, but at the same time, a lot of parallels exist between Joss Whedon’s THE AVENGERS and this DEFENDERS trailer. From the build-up of individual shows and witty comebacks to the heroes fighting when they first meet to the team eating foreign cuisine together. Luke and Danny’s fight felt akin to Thor and Tony in THE AVENGERS, before Cap, or in this case, Clair calmed them down. That isn’t necessarily bad. It’s a formula Marvel used to succeed with their movies. It can absolutely succeed again with their Netflix shows.

You can catch the mini-series exclusively on Netflix on August 18th, 2017.