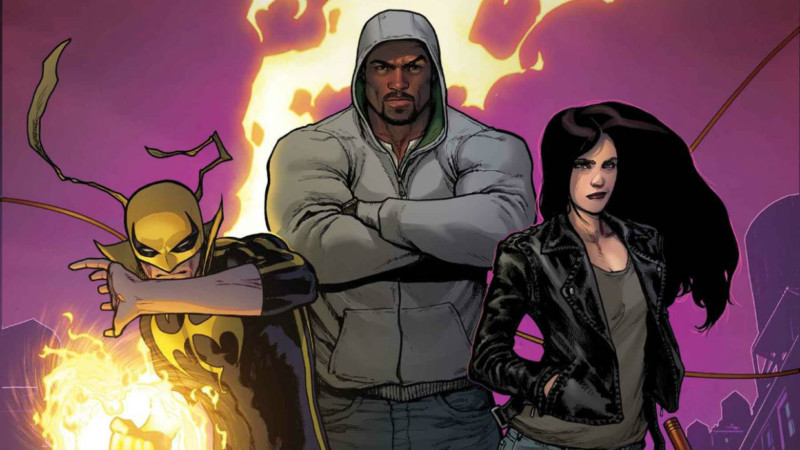 Despite the varying degrees of quality, there’s no question that the Netflix/Marvel shows are a massive success. Love them or hate them, you’ve probably watched them all, as well as countless other viewers. The Marvel shows introduced many people to the various street-level heroes that fans have loved for years. With the DEFENDERS TV show trailer out and the masses waiting on the edge of their seats to watch these heroes finally interact, the scene was ready for Marvel to come out with a DEFENDERS comic. This isn’t a simple cash grab though. Marvel placed comic legend and serious talent Brian Michael Bendis as the writer of the series. Bendis is all too familiar with these characters. He wrote the incredibly moving ALIAS series on which the JESSICA JONES show was based on. He also currently writes the phenomenal JESSICA JONES series. If anyone knows the Marvel Universe, it’s Bendis.

READ: Loving Marvel’s Netflix shows? Check out our DEFENDERS Trailer Review: What You Need to Know

The story is simple but clearly written by a seasoned pro who moves gracefully between lighthearted and dramatic moments. The main conflict in DEFENDERS #1 involves the return of Diamondback, fresh off our screens and fresh out of the grave. When Diamondback sends Jessica Jones to the hospital, our heroes reunite to stop this new threat against them.

This story pleases both new and old fans of the now hugely popular characters. DEFENDERS #1 wastes no time giving us what we want. An incredible panel pops up and introduces each member of the Defenders. The panels include their name, recognizable background characters, and familiar moments from their various story lines. The art styling on these panels create an incredibly fun billboard effect and also serves the practical purpose of pointing out the characters to those not used to seeing them on paper. Comic fans will be happy to see references to Luke Cage and Jessica’s family, as well as fun easter eggs regarding the Defenders’ past and Heroes for Hire.

David Marquez’s art is incredible, and Justin Ponsor’s coloring is exquisitely vibrant. Marquez manages to capture each character’s personality by the way they hold their bodies and by the very squint of their eyes. The facial expressions manage to convey ranges of emotions without being over the top, especially in Luke Cage. The art is crisp, expressive, and lovingly rendered. It perfectly accompanies the straightforward narrative, and readers of any comic proficiency can easily follow the panels without creating the problem of boring structure. Marquez’s New York City is gritty yet filled with color, adding to the feeling of these street level heroes working on the ground. Nowadays, heroes don’t have to fight space monsters to be exciting. There’s enough action in a nightclub or an alleyway to garner excitement.

In terms of characterization, Luke Cage shines through. He’s kind, passionate, and caring. These traits only fuel his anger when he discovers what Diamondback does to Jessica so that even his rage is a result of his love. Jessica is tough, collected, and foul-mouthed. We don’t get too much from Daredevil or Iron Fist characterization-wise, but the characters altogether feel very comfortable with one another. Their rapport feels very organic and believable, and readers will believe that these characters have worked together extensively in the past. Diamondback feels a little over the top at first, as his get-up can be a bit too much; but how dangerous he is quickly becomes apparent when confronted. The humor in the story works perfectly. The effortless beating up of the thugs, the quips between the Defenders, and one really absurd calling card works to keep the story light.

READ: Love Luke Cage? Refresh your memory as we take a look back at season 1!

If I were to critique the comic on anything, it would be that the plot feels a little too simple. There isn’t a sense of very real danger until the final panels, and perhaps extending the mystery of who shot Jessica might have allowed for more drama and speculation. Furthermore, I would have loved to spend more time with Daredevil and Iron Fist. They simply show up in quick succession, and we don’t really get to see them out and about. This might have also helped the problem of not enough characterization on these two characters in particular. However, this is nitpicky for a nearly perfect introductory issue. I’m sure that we will spend much more time with these characters and the stakes will be raised in subsequent issues.

All in all, this is a highly accessible comic for both new and seasoned readers. Some comic purists might feel DEFENDERS #1 holds your hand too much in introducing these characters and their dynamics. However, this is a story made to be easily followed, and there’s nothing wrong with that. That doesn’t mean it wasn’t crafted with intent and love, though. Bendis and Marquez know and represent these characters with expertise. DEFENDERS #1 doesn’t skimp on action and great dialogue. It’s an auspicious beginning to what will surely be an incredibly fun romp putting the Defenders in the spotlight, and as both a reader and a watcher, I’ll be sure to keep my eyes out for the next issue.