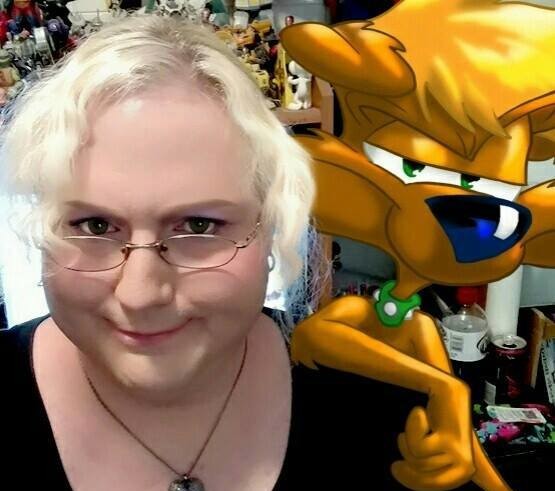 Dee Fish is an independent comic artist/writer that has been working for more then two decades.  She began publishing her online comic, the newspaper strip-style DANDY AND COMPANY, which was eventually made into print (originally credited to Derrick Fish).  Dee continued her work with the fantasy drama THE WELLKEEPER while making several appearance at Florida conventions and now Pennsylvania cons as well.  At the same, Dee came out as trans last year, and has continued to work on comics for IDW and her own work and freelance projects.

ComicsVerse: How long have you been working in comics?

Dee Fish : I first self published my first “fanzine” style comics in 1994 after a year at the Joe Kubert School. My online comic, DANDY AND COMPANY began in 2001 and was in print in early 2002.  Most of them were the early DANDY AND COMPANY strips I did in school collected in book form. I’d go down to Staples or Office Depot and print a few copies at a time, get them bound there to sell directly to friends of at local shops. As low rent as it gets. I also published the supernatural superhero comic, APPARITION the same way back then. All of that material is available now in the book “DANDY AND COMPANY: Unhousebroken” and the newly re-published “Apparition” issues I’m currently remastering and re-scripting.

CV: What was the inspiration behind DANDY in terms of writing and drawing?”

DF: DANDY AND COMPANY is best described as the slightly skewed misadventures of a Dog and his boy. It’s essentially my love letter to Charles Schulz’s PEANUTS and LOONEY TUNES cartoons mashed together. I absorbed a LOT from (Chuck Jones’s) cartooning and storytelling.  DANDY was created, actually, when I was only 8. I wanted to make a comic strip that was like the others I loved so much at the time like PEANUTS and GARFIELD while also feeling like a Bugs Bunny cartoon. The PEANUTS influence was VERY obvious in the first few years, as that early DANDY looked a LOT like Snoopy before I would decide to give him a more distinct redesign in 86. Artistic integrity didn’t kick in until I was 12, apparently. 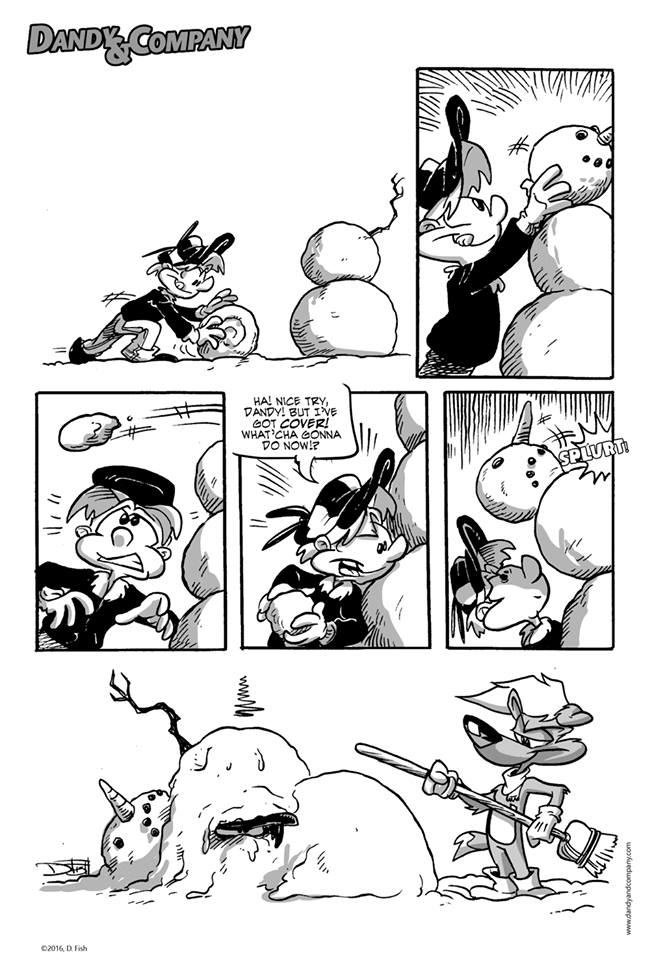 CV: And what about THE WELLKEEPER?” What was the story there?

DF: THE WELLKEEPER is the story of a young woman named Zoe who has inherited a power passed down from mother to daughter across the generations that connects her to the Life Energy of the planet. This connection enables her to communicate with and to a certain degree control Natural Forces plant life and animals. But this power skipped a generation and Zoe has inherited these gifts without knowing what they are or where they’re coming from or why she is now being hunted by a dark force that conspired to destroy her and end the lineage of well keepers.  It was heavily inspired by a lot of things but most specifically it would be the Don Bluth animated film THE SECRET OF NIMH. I was obsessed with that movie growing up and always wanted to tell a story that felt like that. Years later when I read Jeff Smith’s BONE, that inspiration resurfaced very hard and after a lot of sketching and brainstorming, the WELLKEEPER was the result.

CV:  Are there any surprising influences?  And was the environmental tone intentional?

DF: Some of the character designs were based on commission that I had done at conventions a couple of years prior but other than that nothing too surprising in their origins that I can think of. Environmental side of the story, if it can be said to have such, largely came out of my desire to set a story in the woods. Zoe’s manipulation of the elements came out of a visual inspiration from a sequence in Disney’s FANTASIA 2000. But I made a very conscious effort to keep the environmental side of the story focused on the supernatural elements. THE WELLKEEPER isn’t CAPTAIN PLANET, and I have no intention getting on a soapbox and having a fight with polluters or push recycling. That’s really not the focus of the book and honestly would seem a little hypocritical considering how much paper goes into its development.  It was mostly an attempt to emulate the tone of the story and the artistry. I knew I wanted talking animals and a little bit of humor but also a story with depth consequences and scary villains. Plus a little bit more magic. 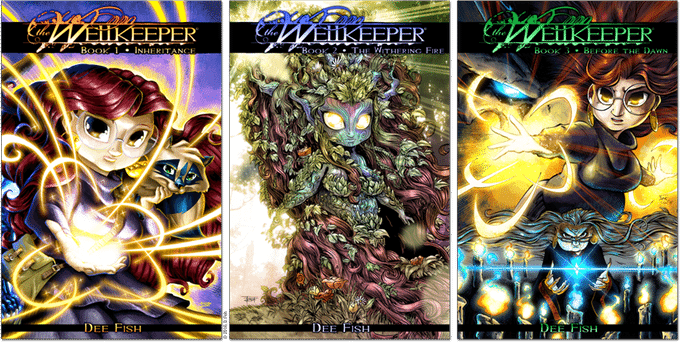 CV: Of the two, which do you find more rewarding/personal to draw?

DF: Emotionally I’m connected to both of them in very different ways. I’ve been writing and drawing DANDY AND COMPANY for so long that they’re somewhat inexorably linked to me in that way that only family can be. I don’t think I’ll ever stop creating new stories for those characters. Artistically THE WELLKEEPER is much more a labor of love period with an emphasis on labor.  A single DANDY strip rarely takes longer than an hour to create whereas a single page of THE WELLKEEPER often takes up to 8 hours and offers creative challenges that continue to push me.  But there’s something satisfying about the immediacy of the comic strips. There’s a raw honesty in working that quickly.

CV: Since coming out as trans last year, do you see either comic differently, or perhaps see things there you didn’t realize before?

DF: Not too much, but that’s because I pretty much knew that I was a transgender woman most of my life, and had been letting little bits of that out for years, hoping it would be a clue to folks. I guess the biggest thing is now I can openly embrace that in my work.  It won’t really affect DANDY AND COMPANY all that much, even though I am a character that appears from time to time as the “cartoonist”. But I actively avoid stories with messages in that strip and doubt I’ll ever try to shoehorn such issues into that narrative.  But with THE WELLKEEPER, I’ve planned on leaking some of that in to the new stories in clever little ways for years. But I have always preferred the “Star Trek” method of addressing social issues, so expect such things to be couched in magical metaphor in THE WELLKEEPER.

CV: You recently were invited to Tampa’s MEGACON, after years of attending as a vendor.  What was the reaction to attendees seeing ‘Dee’ for the first time?

DF: I’ve had some fears about that, particularly at conventions, but so far there hasn’t been any noticeable blow backs. My first time there, not just as Dee but as an invited guest was fantastic! The folks that ran the show made the experience as easy and smooth as possible and it was wonderful to feel so welcome. It was certainly helpful to my anxiety that the Tampa Convention Center had multiple family restrooms.  I got to reconnect with a lot of folks I haven’t seen since I moved from Florida to Pennsylvania in 2015. As such, it was the first time meeting me as “Dee” for a LOT of people and everyone was really fantastic! There was so much love going around at that show, and in a weird way, a lot of people I think I really met for the first time too.

CV: You’ve done work with IDW in the past (STAR MAGE, WHITE CHAPEL).  Have you ever considered going to them, or another publisher to get your work out on a larger scale?

DF: Well, I do love the freedom of self publishing, but I would very likely jump at the possibility of getting something like THE WELLKEEPER picked up by IDW or another larger publisher that handles creator owned titles. Mostly IDW. I really love their titles. great stuff. That and Image turned THE WELLKEEPER down 3 times already.

CV: What in the current comics world interests you?  Is there a particular company you have a fondness for, or that you feel is doing better work?

DF It’s hard to narrow that list down. I love all of IDW’s Disney comics. Their Turtle books are amazing. ROM is a dream come true. Walter Simonson’s RAGNAROK continues to amaze and the completion after 20 years of John Byrne’s NEXT MEN was fantastic. I ADORE Skottie Young’s I HATE FAIRYLAND. MONSTRESS is amazing too. As far as “mainstream”, I mostly just follow artists on books from the “Big 2”. So Im reading ALL STAR BATMAN because I love John Romita Jr.  Erik Larsen’s SAVAGE DRAGON is also always on my pull list.

READ: Our review of ALL STAR BATMAN #1

CV: Finally, what other projects are you working on for the foreseeable future?

DF: MARJORIE OF THE WEIRDLINGS is my newest creation. It’s the story of a young transgender girl named Marjorie who’s having a hard time adjusting at such a young age and finds herself in a lot of fights at school. After a fight with her mother, she discovers a magic ring that transports her to a mysterious and dark mirror reality called the Weird World. Once there, she finds herself transformed as well, into a creature called a Weirdling. She’s super strong and possessing of lots of strange new powers, but other creatures in the Weird World want her magic ring so they can escape into OUR world. But Marjorie has no intention of giving it up since she much prefers hr new reality.  Right now, it’s just a planned one-shot. A 12 page preview premiered in black and white at Magacon Tampa.

CV: It sounds like something that could go past a one shot.  Would you turn it into an ongoing thing like WELLKEEPER at some point?

DF: Well, it’s a different beast. THE WELLKEEPER is a finite story with a planned ending. Marjorie, if it found legs, is more akin to an ongoing adventure. It would not be limited as I have a lot of different ideas that could be seriously fun.

CV: To end things, is there anything you’d like to say to young artists or trans people right now?

DF: Create. Tell the stories you want to tell. Make the comics you want to see on the racks. No one else is going to realize your dreams.

All of Dee’s independent work can be found at www.big-pond-comics.com.