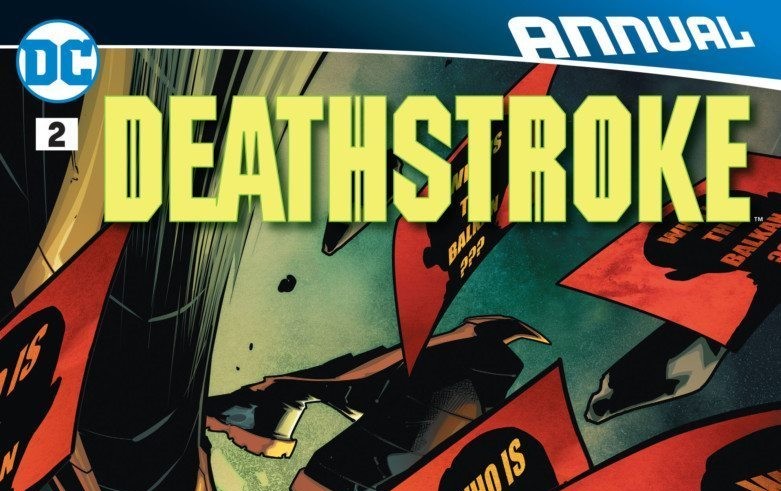 The DEATHSTROKE series as a whole has a lot going on at the moment. Recently, Deathstroke has been on a personal mission to protect his children, Jericho and Rose. After Slade found out that Rose had been kidnapped, he reluctantly enlisted the help of Victor Ruiz (leader of a mercenary coalition) to track her down. The kidnapping turned out to be a ploy to weaken and kill Slade. The plan was designed by Deathstroke’s former war buddy the Lawman, who hired Victor and Snakebite as parts to the scheme. With Slade at his lowest point, he received help from an unlikely ally, Ra’s Al Ghul, and ended up a member of the League of Assassins.

READ: Deathstroke has been a big part of the Teen Titans, so find out what Teen Titan comics are essential!

DEATHSTROKE ANNUAL #2’s story deviates from the current storyline in the series and features Deathstroke in Rhapastan. The issue begins with the assassination of the son of the gang leader Kirmani by the mysterious mercenary known as the Balkan. The Balkan is under the employ of the rival gang leader and, as a response, Kirmani hires Deathstroke to avenge his son. This sets off a game of one-upmanship between the Balkan and Slade Wilson with many bodies left in their wake. 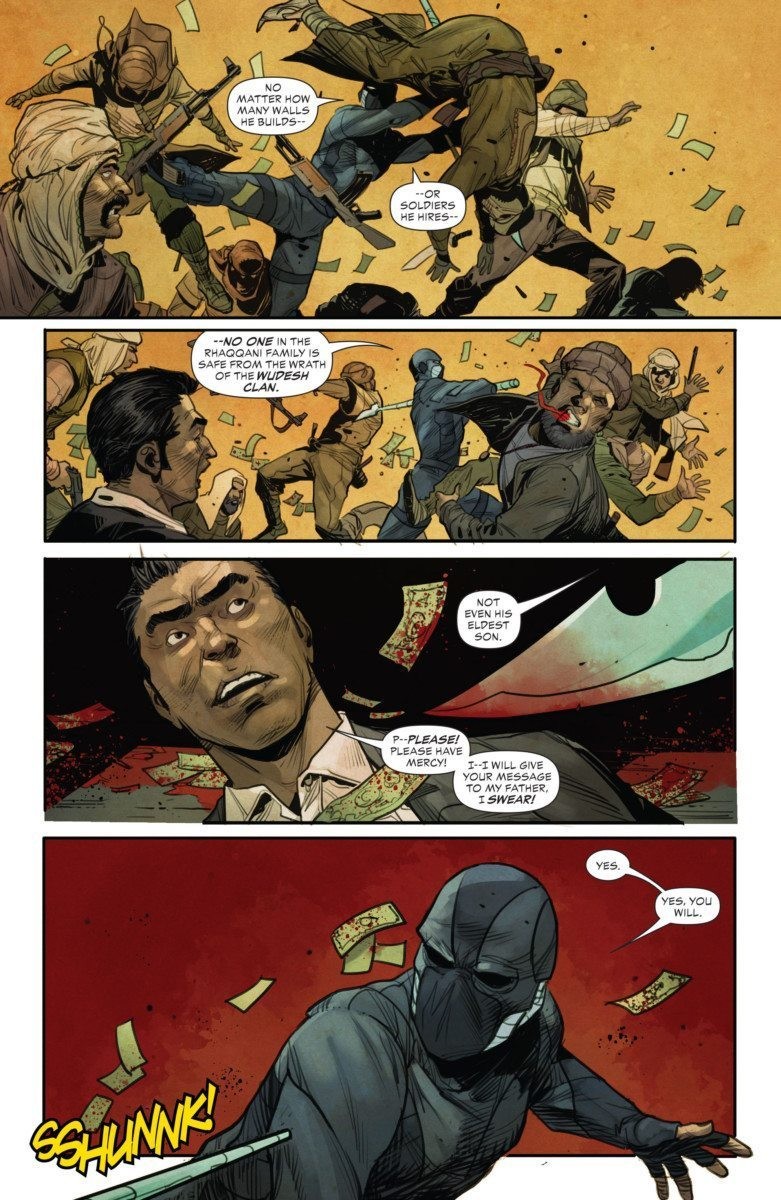 Many stories in annual issues offer a departure from ongoing storylines and, for DEATHSTROKE, it is a welcome change. Instead of trying to fight for his children, the issue shows the Deathstroke of old without attachments or obligations (except to the client). It’s also clear early on that neither Deathstroke nor the Balkan is willing to take on the other, which creates a good flow to the story and creates intrigue as the pages turn.

READ: Where else has Deathstroke been and who else has he been working for? Find out here!

Writer Phil Hester offers much of what makes Slade Wilson a strong character. Deathstroke is a ruthless and intelligent mercenary, and Hester lets it known in DEATHSTROKE ANNUAL #2 that Slade does not and will not hesitate to kill. Still, he’s not as one-dimensional as he is written in some other appearances. It seems as though his love for his children in the ongoing series carries over to this annual issue when Slade encounters a young teen named Adi. As a member of Kirmani’s gang, Adi first meets Slade by pointing a gun at him. Normally, Deathstroke would murder the child without remorse, but he instead hires him and treats Adi as a protégé. Adding this emotional depth to a historically heartless character is an impressive feat. 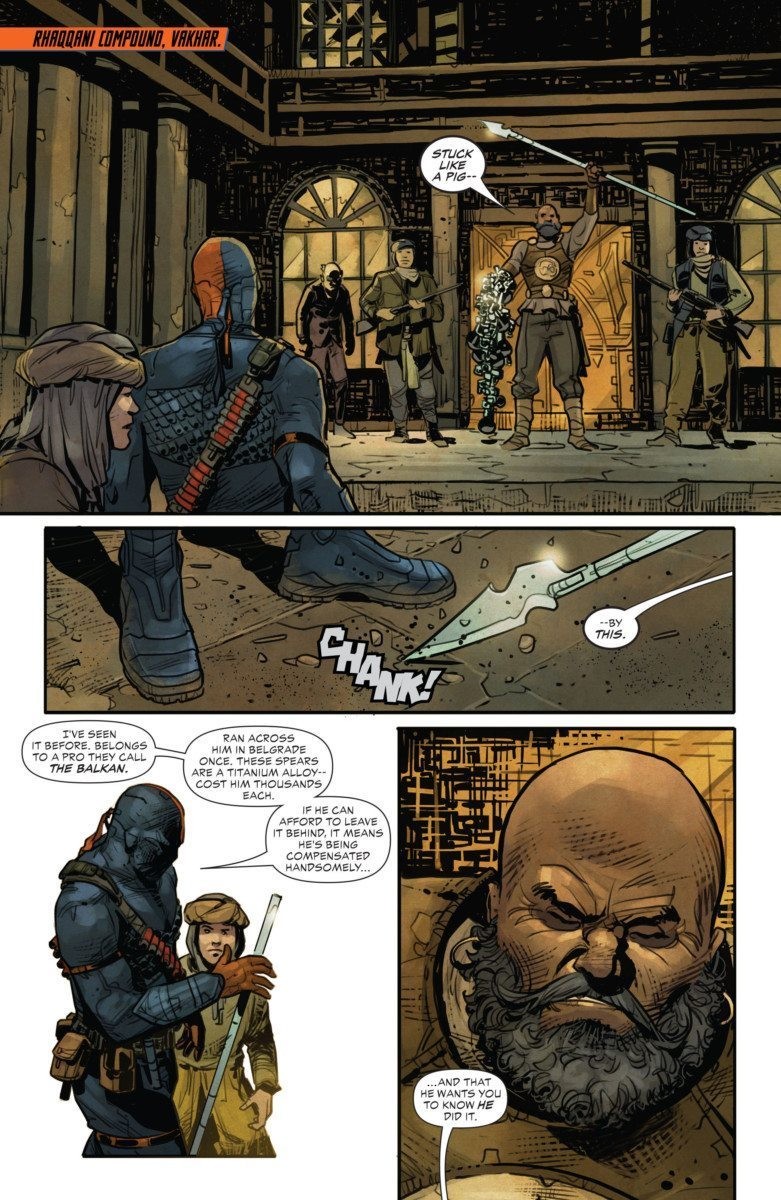 The art by Mirko Colak is very fitting for the issue with the overall feel and setting. The fictional city of Rhapastan looks as though it is set in the Middle East, seemingly in a poor and run-down neighborhood. The broken-down buildings and cluttered streets along with the yellow and brown coloring work are very effective in forming the setting. Also, with so much death and destruction throughout the issue, the action in the panels and the sequences from panel to panel are very well done.

DEATHSTROKE ANNUAL #2 is a good issue to remind readers of how badass Slade Wilson still is. He may worry about his children, but he is still taking on new killer contracts in his spare time. The issue may not tie into the main ongoing storyline as of now, but that could change quickly. For all we know right now, Deathstroke could have been ordered by Ra’s Al Ghul to go on this mission. Or the issue may not tie into the DEATHSTROKE series at all. We’ll have to keep reading and see!