DEATH OF X #4 closes a mini-series whose story has been waiting to be told for more than a year. The series started off very strongly, and considering the amount of information that was being crammed into four issues, it rarely wavered. The finale of DEATH OF X gives Charles Soule an excellent point of entry for his forthcoming series, INHUMANS VS X-MEN of which #0 is out next week. However, it should go without saying that due to the nature of DEATH OF X, it would be irresponsible to read #4 before reading the other issues, or to read this review without reading DEATH OF X #4. It’s worth the four dollars, I promise you. Go read it, and then come back.

READ: One of our writers pointed out a monumental problem with the premise of INHUMANS VS X-MEN. Find out what it is!

The story begins with Cylcops, Magik, Emma Frost, the Stepford Cuckoos, Alchemy, and Sunfire poised atop a hill in preparation for their attack on the Terrigen cloud. Meanwhile, fifty kilometers away, Magneto contains Crystal and her team of Inhumans, along with a team of mutants led by Storm so as to ensure there would be no interference with Emma and Scott’s plan. Sunfire attempts to fly Alchemy above the cloud of Terrigen mist, but is shot down by an Inhuman pyrokinetic, Infern, while Medusa, Black Bolt and a team of Inhumans look on from a separate hill. Sunfire and Alchemy make a second attempt at attacking the cloud of Terrigen Mist, this time succeeding. Unfortunately, this success comes at the cost of Alchemy’s life, as he passed directly through the deadly cloud. With one of their two sacred clouds rendered inert, the Inhumans were understandably furious. As such Black Bolt fells Cyclops while the latter was in the midst of taking a stand for his people. Off-panel, Storm negotiated a truce with the Inhumans, allowing both the Mutants and Inhumans to live in peace, should they continue to leave one another alone. Otherwise, according to Cyclops’ brother Alex Summers (AKA Havok), Emma Frost would have otherwise been imprisoned on New Attilan. After Havok questions the circumstances surrounding his brother’s death, Emma Frost reveals to him the true demise of Cylcops, which occurred right before our eyes back in issue one, when he first contracted the M-Pox. The coughing fit that closed issue one was the first of Cyclops’ final moments. 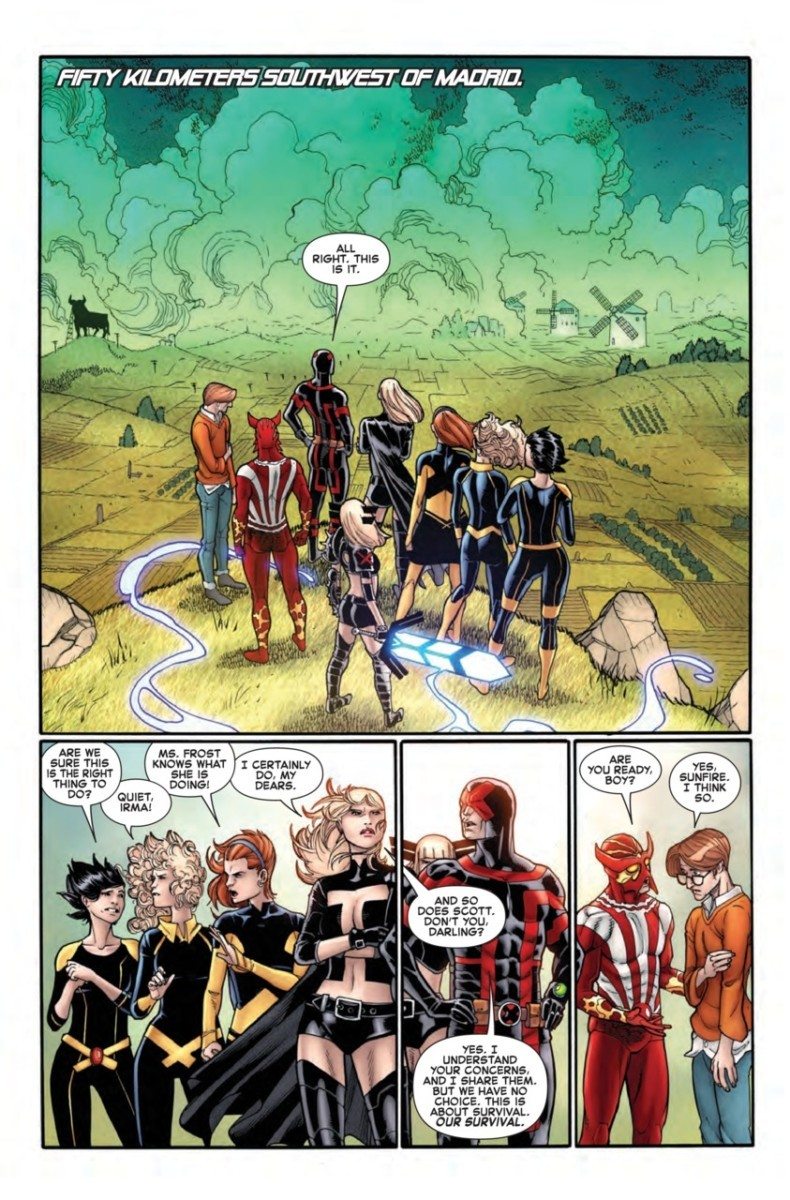 DEATH OF X is finished, and all twists have presumably been revealed. Now, I can finally say with complete confidence that Soule and Lemire have crafted a masterpiece. Will DEATH OF X go down in X-Men history as one of the best events in the franchise’s history? That’s not for me to say. I can say, however, that DEATH OF X is one of the most remarkable portrayals of Emma Frost that I have yet to read. While crafting an image of Cyclops so precise that even his closest friends are none the wiser is no easy feat, even for a powerful telepath, Emma Frost is a breed of her own. Soule and Lemire perfectly capture Frost’s meticulous organization and ability to compartmentalize that allow her to lie about the death of the man she loved most to all his friends and family. The writing duo also writes Frost’s created Cyclops extremely well. Though I am not amongst the most seasoned of X-Men readers, the differences between the writing of Cyclops, and Frost’s recreation of him were imperceptible, if they even exist. The overarching story of DEATH OF X was extremely well-done, though I believe it is best read from start to finish in one sitting to bolster issue #3, which is not as entertaining standalone as the other three issues. Soule and Lemire have crafted a solid plot (for both DEATH OF X #4, and the series in general), though in my mind, it takes a back seat to the impressive amount of detail in characterization, particularly in regards to Cyclops and Emma Frost. I’m certainly excited to see where Soule takes the characters in INHUMANS VS X-MEN!

Artists Aaron Kuder and Javier Garron provide solid work for DEATH OF X #4, though it improves continually as the issue progresses. There is nothing missing from the beginning of the issue per se, but towards the end of DEATH OF X #4, the artwork is so dynamic that it feels unprofessional to not question why this unknown element is missing from the start of the comic.My only complaint regarding the artwork in this issue is the portrayal of Lockjaw, the Inhumans’ dog. Since Lockjaw is so large, it feels strange seeing him drawn nearly to scale, rather than having a body dominated by his enormous head. However, the artists soon hit their stride. Some of the issue’s high points, artistically, are Alchemy after contracting M-pox, Magneto’s containment of the X-Men and Inhumans, and the build-up to Cyclops’ confrontation with the Inhumans. However, it is Cyclops’ last stand, the climax of the issue, that takes the cake. The utter decimation of Cyclops, as well as the reactions to it are superbly rendered, leaving nothing to be desired. 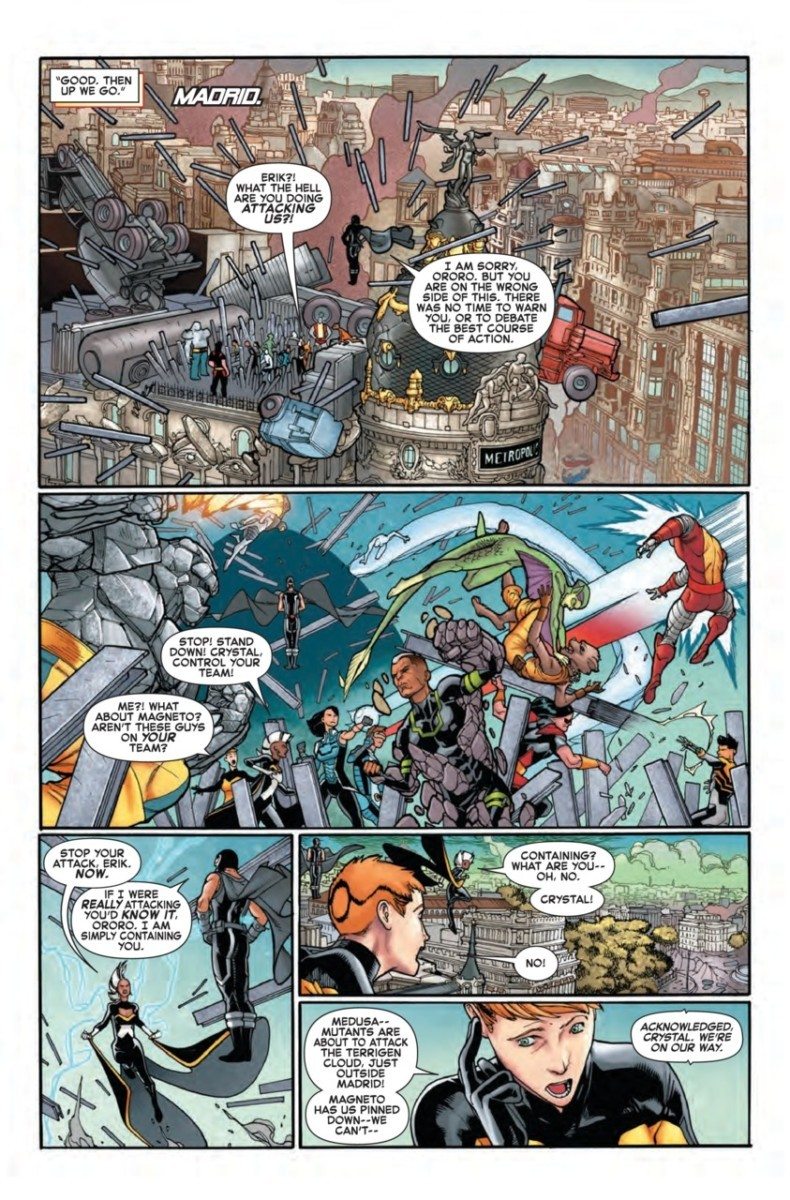 Colorists Morry Hollowell and Jay David Ramos shift palettes midway through DEATH OF X #4 in order to better match the severely darkening tone of the issue. For example, the tranquil sea green of the Terrigen cloud that sprawled over the pages of the last three issues of DEATH OF X is replaced by an angry red foreshadowing the disasters that reveal themselves towards the end of DEATH OF X #4. While I’ve remarked on the beauty of Hollowell’s environments before, I feel as if I’ve not yet praised the detail he and his co-colorists employ while facially shading. Though subtle, this is yet another feather in the cap of Hollowell-led coloring teams that worked on DEATH OF X, especially that of Hollowell and Ramos on issue #4. Their coloring brings characters to life, especially in reaction to the decimation of Cyclops by Black Bolt, where the characters practically bleed emotion. Hollowell has become my go-to example of why colorists are crucial to the process of comic production. He remains one of the largest draws to DEATH OF X, as well as the most consistently excellent member of its creative team.

READ: The title is misleading. DEATH OF X isn’t the end of the X-Men! See which of your favorite mutants are getting solo titles this spring!

While die-hard Cyclops fans might be disappointed in his demise, I believe that DEATH OF X #4 provides readers with a satisfying ending to the series. In its entirety, DEATH OF X is a solid series. DEATH OF X #4 amplified the positive qualities present in the rest of the series, coherent plot, enthralling characterization, and an artistic excellence that allowed for emotion to be conveyed as clearly as a face-to-face conversation. This is a must-read for fans of the X-Men and the Inhumans alike, especially those who intend to keep up with the forthcoming INHUMANS VS X-MEN.