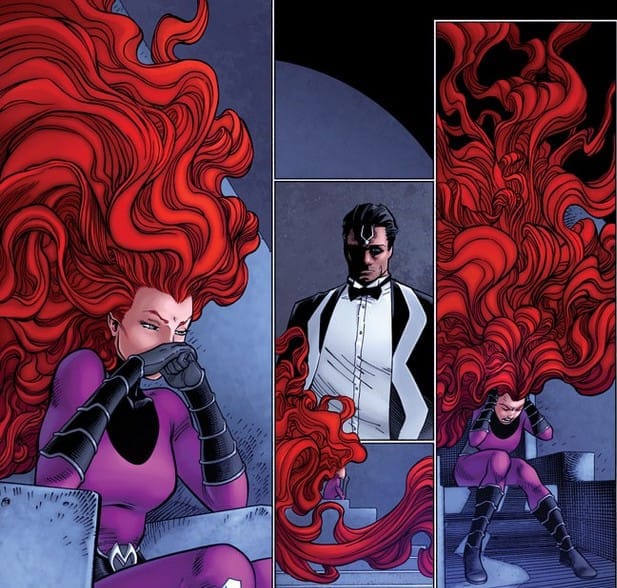 Storm and a team of mutants arrive in Madrid to aid the Inhumans in the evacuation effort. However, the panic caused by Cyclops proved impossible to quell. This prompts Crystal to order the newly-minted Inhuman, Daisuke, to use his powers to put the entire city of Madrid to sleep (including the mutants) without their knowledge. Unfortunately, this is interpreted as an attack by Emma Frost and Cyclops, when footage of the incident arrives at Muir Island, where anger is already mounting as mutants gather to mourn the passing of Madrox and his duplicates. The reactionary team of Frost and Cyclops team with Storm’s collected approach as the former rallies a force, readying for an all-out war, closing with a full-page reveal of their newest recruit, the mutant master of magnetism himself: Magneto!

LISTEN: Storm plays a large role in DEATH OF X, flesh out your knowledge of the iconic hero with this character analysis podcast!

The writing team of Jeff Lemire (EXTRAORDINARY X-MEN) and Charles Soule (THE UNCANNY INHUMANS) delivers on the promising setup of the first issue of DEATH OF X, and begins to answer a question that has been eating at fans for months: Just what transpired in the eight months after 2015’s SECRET WARS to put the mutants back under intense public scrutiny and create such tension between the mutants and the Inhumans? My previous suspicions have been confirmed. Cyclops’ reactionary style of leadership will play an important role in the degradation of mutant relations with the rest of the world. Unfortunately, as history has shown, the majority tends to apply the actions of an individual belonging to a minority group to the entirety of the group.

Lemire and Soule take their time with the story, exploring every action that transpires in the issue’s pages with great detail. Cyclops’ monologue to the people of Earth is the pinnacle of DEATH OF X #2, because of its depth and magnitude. Readers are presented with yet another side of Scott Summers—that with which he addresses the world. Though well-spoken and poised, a hint of fear and desperation can be detected in his monologue, as mutantkind faces another extinction-level threat. This serves to remind us that Cyclops is not only a leader, but a man. Additionally, it provides an opening for readers to be instilled with sympathy for the mutant, though he is in the process of inciting a major world conflict. The majority of the issue focuses on a handful of players, namely, Cylcops, Emma Frost, Medusa, and Storm. Despite this, the characterization of Emma Frost struck me as a bit off. Her presence is much less commanding than usual, and since we don’t receive her inner monologue it is impossible to rationalize why. However, Charles Soule and Jeff Lemire are able to prevent minor characters from falling by the wayside. Even those with a couple of lines are made believable, thanks to careful communication with the artistic team. 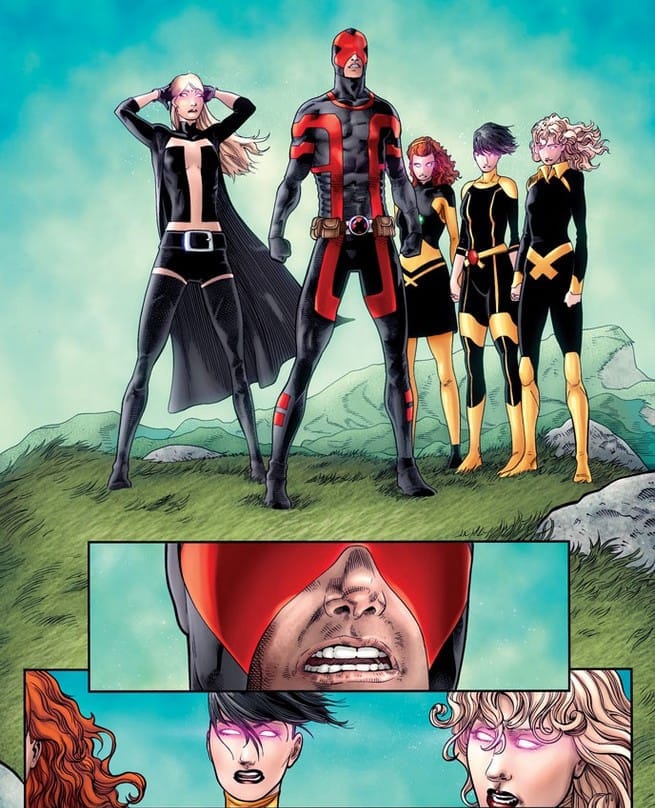 As a whole, the high point of the visuals remains the fantastic portrayal of the abilities of the Inhumans and mutants. The visual team comes together to show readers not only the powers in action, but also their aftermath and in the case of Daisuke’s powers, the manner in which others react to them. The inclusion of multiple perspectives gives the reader a greater sense of omniscience than is customarily conveyed in a majority of comics.

While juxtaposing color themes was a draw in DEATH OF X #1, the narratives of the Inhumans and the X-Men are all but combined, removing the need to play up any differences. This is where Hollowell and new addition, Jay David Ramos, hit their stride. The expanded color palette allows for more vibrant backgrounds and sprawling cityscapes while also bolstering the strength of Kuder’s figures, already striking thanks to the ink work provided by Jay Leisten with Cam Smith and Scott Hanna.

READ: Public opinion of mutants is as complex in the Marvel Universe as gun control is in American politics today!

DEATH OF X #2 is supremely visually intricate, and Kuder receives nothing but accolades. One of the issue’s visual strengths is its variance in setting. By hopping around from Medusa’s throne room on New Attilan, to Muir Island, and again to Madrid, Kuder is able to showcase the mastery he has over his craft. However, Kuder’s greatest achievement is his understanding of and ability to convey the the entire spectrum of human emotion. Kuder’s depiction of Cyclops conveys the latter’s unwavering confidence in the decisions he makes as a leader, while the mutant unsuccessfully attempts to mask the desperation and fury of a leader whose people face mortal danger.

DEATH OF X #2 is extremely dialogue-heavy, and rightfully so—it sets up the rest of what might be the most important X-MEN event of the last decade. In the context of DEATH OF X, and the setup of INHUMANS VS. X-MEN, DEATH OF X #2 and the events that transpire within its pages are necessary. That being said, DEATH OF X #2 will not hold up as a standalone issue except to the most fervent of X-Men fans. Lemire and Soule’s choice to saturate DEATH OF X #2 with dialogue was incredibly justified, giving fans an emotionally charged comic depicting the acute tension that surrounds the decisions of world leaders masquerading as a superhero comic. DEATH OF X #2 effectively communicates to readers the way that the decisions of the few can lead to consequences lived by the many, providing a perspective with which all great leaders must approach the delicate political climate of the modern world.