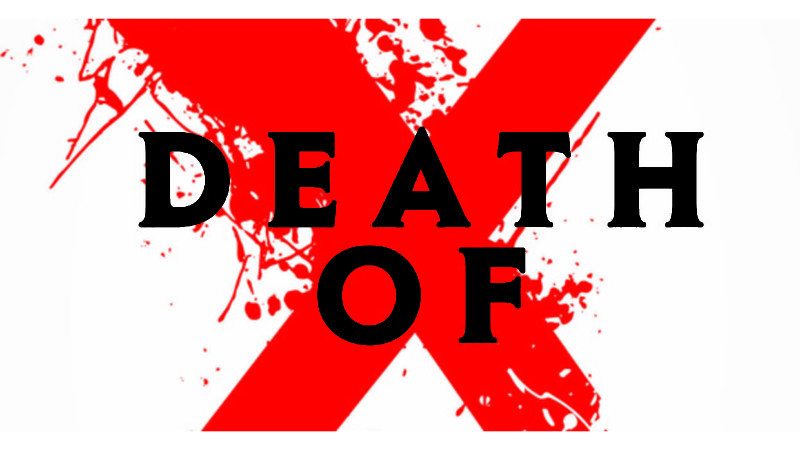 It’s clear that a great deal has changed in the eight month gap between 2015’s SECRET WARS and the launch of Marvel’s ALL-NEW, ALL-DIFFERENT lineup, especially for the mutants. Over the last year, a handful of Marvel titles have dropped hints about what happened during those months, but we hadn’t gotten any definitive answers – until now. DEATH OF X #1 pairs writer Jeff Lemire, (EXTRAORDINARY X-MEN, OLD MAN LOGAN, MOON KNIGHT) with writer Charles Soule (THE UNCANNY INHUMANS, DAREDEVIL, STAR WARS: POE DAMERON) to illuminate the events that transpired during those months. Those of you who’ve been keeping up with any of the books in ALL-NEW, ALL-DIFFERENT know about the Terrigen Mist, the gaseous mass held sacred by the Inhumans; partially due to tradition, and partially because it awakens latent Inhuman DNA in ordinary humans. Then you also know that the Mist also renders mutants impotent, in addition to killing them.

LISTEN: Like the X-Men? Listen to our podcast on Storm!

DEATH OF X is set to be a four issue miniseries, the first of which begins to solidly set the stage for what’s going to be a tension-filled confrontation in the newly announced INHUMANS VS. X-MEN (also scripted by Lemire and Soule). In terms of narrative, the Lemire and Soule collaboration really strengthens DEATH OF X #1. The story alternates between two separate teams, the Uncanny Inhumans and the Uncanny X-Men as they embark on two very different voyages. The X-Men fly to Muir Island, which hosts a mutant research facility, the staff of which (predominantly made up of Jamie Madrox, the Multiple Man’s duplicates) are among the first mutants claimed by the Terrigen Mists. 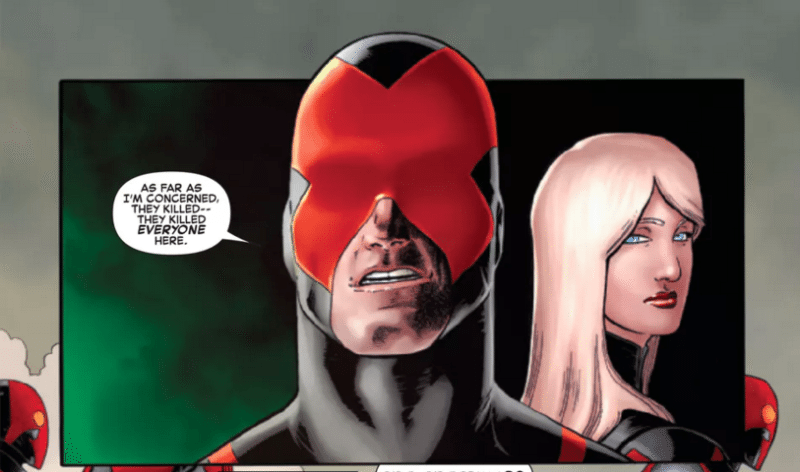 On the other hand, the Inhumans, led by Crystal, fly to Japan where they’re welcomed by a more tolerant public than the mutants ever encountered. The purpose of the trip? To help ease newly transformed Inhumans through the complicated change in their lives. With the help of a newly altered Inhuman, they’re able to thwart an attack by H.Y.D.R.A. Perhaps this adds fuel to the flames of Cyclops’ rage; he and his fellow mutants have never been shown the kindness that the public is giving the Inhumans, even when the mutants are faced with a possible extinction-level crisis, which just so happens to be the source of another race’s celebration.

READ: For a deeper look at the X-Men, check out our analysis of the X-Men in relation to gun control!

The contrast between the tone of each team’s narrative is mirrored visually. Colorist Morry Hollowell deserves the highest accolades for the way he captured the contrast between the two storylines. He renders the Inhuman half of the book in bright, hopeful colors, while the mutant storyline is characterized by dark shadows and foreboding grays. DEATH OF X #1 is artist Aaron Kuder’s (ACTION COMICS) Marvel debut. Though Kuder doesn’t employ the same level of detail throughout that we saw in ACTION COMICS, there are a few breathtaking two-page spreads that will hold reader’s eyes for minutes on end (neither of my roommates read comics, and I’ve already forced both of them to look at Crystal’s attack on H.Y.D.R.A and the death of Madrox at least twice). 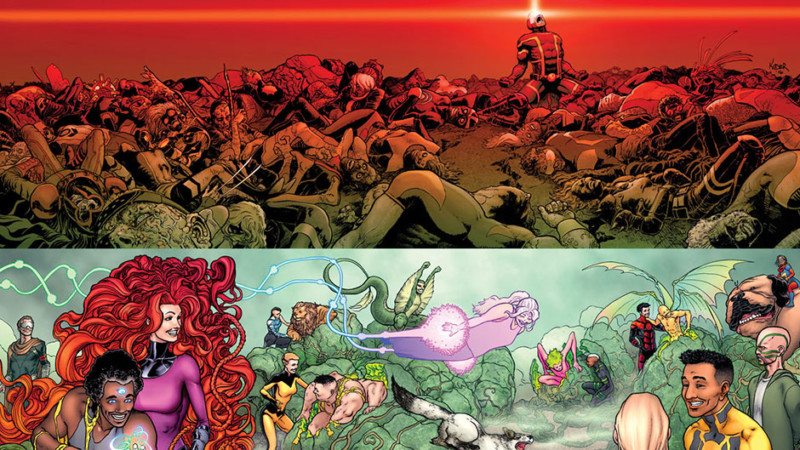 What caught my attention was Kuder’s portrayal of Cyclops, who with each new appearance has started to remind me more of the dynamic and polarizing Magneto I knew as a kid than the studly, visored leader of the X-Men I remember – who was a bit more level-headed.  I do have some concerns that because of this, the X-Men (and by extension, all mutantkind) will be seen as extremists, rather than a desperate minority trying to evade extinction. Especially when their narrative is read alongside that of the Inhumans, which thus far, is bright, positive, and untainted by the years of public stigmatization and persecution like that experienced by the mutants: Marvel’s catchall metaphor for minorities.

READ: The X-Men have long been a vessel to discuss social issues. Is this no longer the case?

While the direction of DEATH OF X is clear, its details are not. We already know that Cyclops will end up dead, or at least his friends will believe him be. This was revealed by Storm to Old Man Logan in EXTRAORDINARY X-MEN #2. DEATH OF X could play out extremely predictably, to fill in the gaps, as a means of getting readers up to speed before INHUMANS VS. X-MEN, but perhaps we’ll be surprised. With only three issues left in DEATH OF X, I feel the plot should be moving a bit more quickly. This issue laid some solid groundwork and built a great deal of suspense, now Lemire and Soule need to deliver. Currently, we’re missing crucial information as to the current surge in anti-mutant sentiment that has swept the Marvel universe: what exactly did Cyclops do to cause it? Hopefully DEATH OF X #2 (out on 10/19/2016) will begin to provide answers.