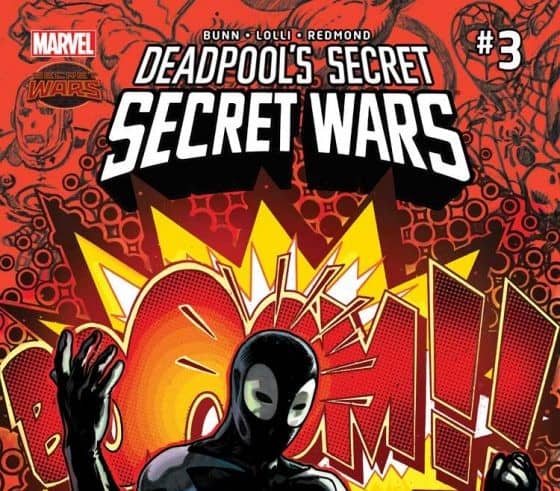 With the “Secret Wars” still going on in the Marvel universe, there’s still a Chimichanga sized hole in the hearts of readers everywhere. That’s right, Deadpool, the regenerating degenerate, is still sadly dead (RIP in Peace). However the execs at Marvel couldn’t simply leave Deadpool to waste away in the back issues waiting for his inevitable resurrection (not with all the publicity for the Deadpool movie fresh on everyones mind) so Deadpool’s Secret Secret Wars was born. These issues are NON CANNON but deliver all the Deadpool hyjinx you could possibly ask for.

I’ve got an issue…. DEADPOOL’S SECRET SECRET WARS #3 that is!

Issue 3 of DSSW is actually my least favorite of the three that have come out so far. The first issue of DSSW had charm and nuance, it was the issue which introduced the plot and got me hooked into the series. The second issue of DSSW included self referential humor and twists which made the issue entertaining and fun. Number three however, well….it’s just okay.

This issue seems like a modge podge of secret wars scenes all thrown together to give the readers a sense of “wouldnt it be funny if Deadpool was there?” Maybe it’s my bias against the Secret Wars series itself. Cards on the table, I dont like the secret wars, and I wish they stayed a secret in the first place. *Buh dum tss* There’s so much going on in these damn wars, so many characters, so many worlds, it’s a juggling act that Marvel is having trouble keeping up with.

In this issue, first Deadpool is in a romantic moment, then he’s  immediately back in battle, only to be taken into a one on one fight with “Thunderball”, only to have the narrative switch to a glorified “Dress me up” Deadpool moment (okay okay that part I liked, as well as the fact that of course handsome Deadpool would have a Bitchin’ Mustache). The rest of the issue continues on like that, lots of randomly interconnected scenes that seem as if the writers are pressing fast forward and the rewind on their magical comic  remote *note to self: name for band: Magical Comic Remote*

READ: SPEAKING OF SECRET WARS TITLES, THE SECOND ISSUE OF STAR-LORD AND KITTY PRYDE IS HERE! CHECK OUT OUR REVIEW!

The best moment in this issue, aside from the aforementioned Deadpool dress up,  would be the very ending where

Oh and did I mention, SPOILERS

In order to save the fallen Marvel heroes, it’s revealed that Deadpool had to give up his good looks for the greater good. 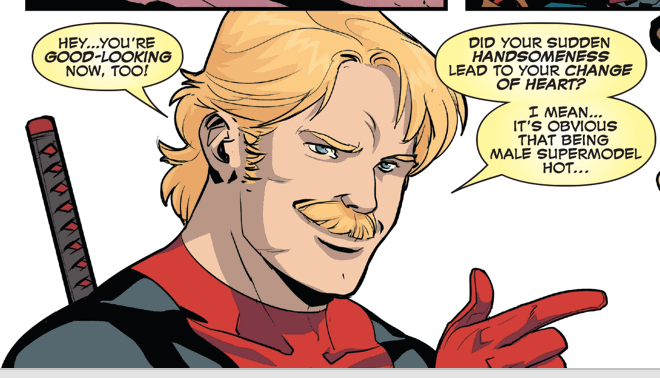 *Enjoy it while it lasts*

READ: MAYBE THE WHOLE PROBLEM WITH THE MOST RECENT FANTASTIC FOUR MOVIE WAS THE INTERNET? READ THIS ARTICLE TO FIND OUT WHY!

Actually, I take that back.

At this point in Deadpool’s history, it cant be considered “uncharacteristic” nobility anymore, huh? I mean aside from the massive genocides and questionable morals, Deadpool is a good guy now isn’t he? If it’s a choice between getting his money or saving a civilian, sure he’ll make a snarky quip about “what would spider-man do” or something, but it’s not out of character anymore for him to save that random civilian.

Anyway, this comic ranks a 5/10 on the Comicsverses’ constantly fluctuating “10” point scale or as we call it “The scale formerly known as the 5 point scale.”