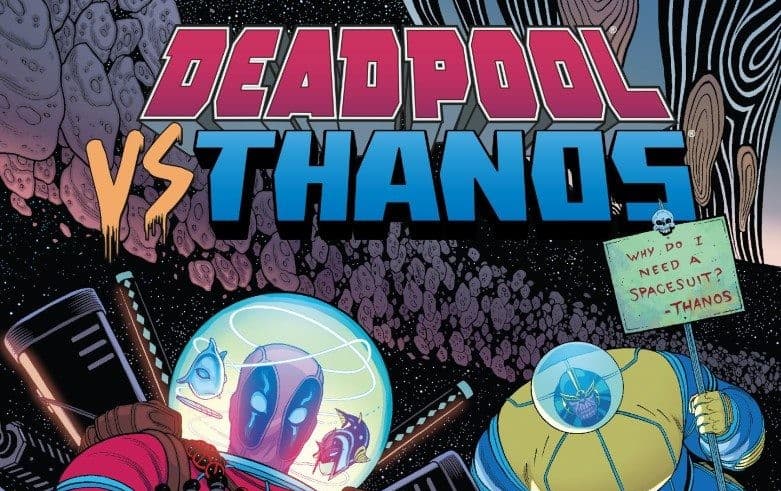 Deadpool and Thanos are hot on Death’s trail, but no one seems to believe they’re actually trying to help!

Death’s last clue leads Deadpool and Thanos to an abandoned mining colony. There they’re assaulted by a both a death cult and the Guardians of the Galaxy; the former were complicit in Death’s disappearance, and the latter just assume Thanos is responsible for the chaos in the wake of Death’s disappearance. A battle ensues, but Deadpool and Thanos get away, with another clue in hand, and their next destination dead in their sights.

The disappearance of Death is an interesting mystery, and I wish it were happening in another comic. There is so much getting in the way of the story here that I found myself actually frustrated while reading it. If this is how Deadpool is all the time, I don’t understand how he’s so popular. (I know for a fact this isn’t how he is all the time because his cameo in AXIS–specifically his banter with Tony Stark–is just wonderful.) Beyond that, this issue is especially tough to understand, what with overwrought dialogue, convoluted plotting, and confusing art and layouts. Ruth Redmond on colors is the only one that acquits herself well, giving the proceedings a bright, fun air while grounding them in dark undertones–appropriate for a wacky story that takes place in deep space, a supposedly-fun romp featuring Death.

READ: RUTH REDMOND ALSO COLORS ONE OF THE MOST EXCITING RELEASES OF THE SEASON: EXIT GENERATION #1. READ OUR REVIEW HERE! 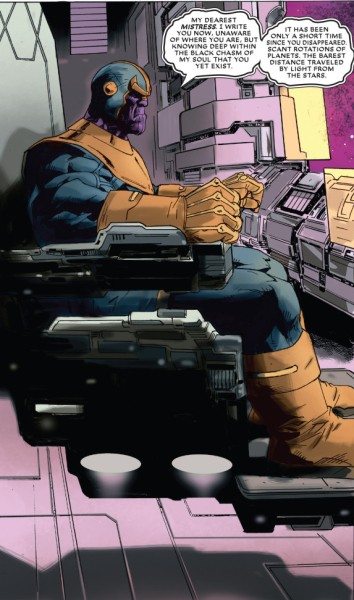 It’s almost as if the team is working to make the story difficult to understand–I had to pause a few times to analyze panels just to understand what was happening in them. These weren’t particularly complicated sequences, either–it was a fight scene. When one of your main characters is an expert martial artist, you would hope the action sequences would at least be legible. On top of that, Deadpool is just obnoxious, Thanos is a bloviating bore, and everyone else seems intent on yelling exposition and references. Thanos’ expository monologue in the beginning seeks to explain the state of the world in Death’s absence, but it just muddles the rules–no one being able to die is one thing, but what Thanos goes into flowery detail to explain just defies understanding.

Beyond that, the art seems rushed, or even unfinished, and the character designs are sloppy and uninspired (Gamora is particularly ludicrous). There were panels that brought to mind the dizzyingly frustrating editing of THE DARK KNIGHT (a film that, for me, remains unwatchable to this day): I wasn’t quite sure what I was supposed to be looking at, and ended up just ignoring the panel altogether. 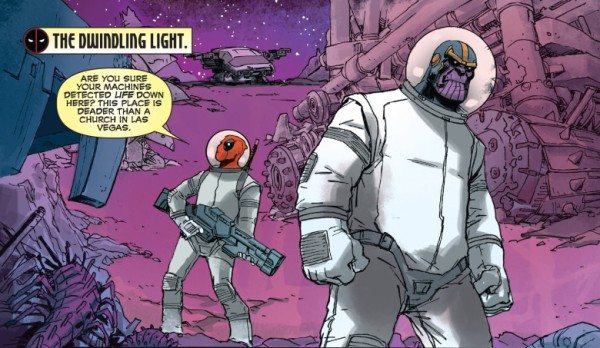 READ: WE’RE GETTING INTO TV! CHECK OUT OUR REVIEW OF THE SEASON TWO PREMIERE OF GOTHAM!

There is an interesting idea here, but that idea and its story are clearly the last consideration. Deadpool and Thanos get one clue, they follow it, then they find another clue. The end of the issue suggests this is just going to keep happening just so the creators can trot out forced and tired jokes and shoehorned cameos, with ultimately no substance to the proceedings. If this were some kind of experimentally meta attempt at creating a comic as obnoxious and unhelpful as its title character, it would be interesting… But I really don’t think that’s what’s happening here. It’s a shame, because the pieces are in place for a really fun story. It’s just that no one seems to know how to put them together.

DEADPOOL VS. THANOS #2 may have some appeal for die hards, people eager to see Deadpool and Thanos and the Guardians all in one place, but beyond that, everyone else should pass.