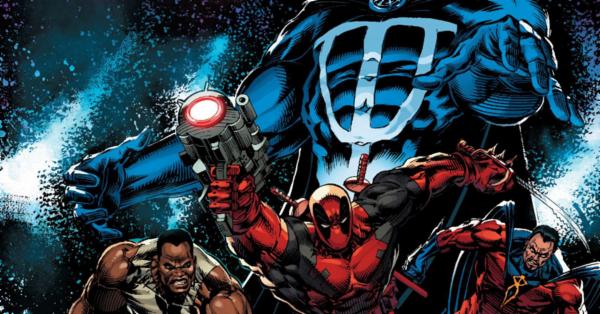 DEADPOOL AND THE SECRET DEFENDERS is a title that grabs longtime fans easily. The idea of the Merc with a Mouth teaming with a group of unlikely oddball heroes sounds like a perfect collaboration, especially when you realize that the series is primarily dealing with magical phenomena and enemies in the 90’s. Deadpool adds a sense of levity to the team (how could he not, fighting demons with swords and guns), as well as his fighting experience. It adds a good human touch to a very magic based story, but Deadpool only appears in the first story arc, despite the book’s title. It’s hard not to see this as a marketing ploy; this book was coming out in the rise of IMAGE Comics, which featured former Marvel artist Rob Liefeld. With IMAGE’s popularity, it’s all too easy to imagine Marvel taking the step of placing Deadpool, a Liefeld character, front and center on their new team book of admittedly minor characters,. Then again, it’s also a warning for the book’s gimmick – a revolving door.

This is a team with a constantly shifting lineup and only three static members. The first is the Celtic wizard Dr. Druid who is forced to assemble the team thanks to visions from the deposed Dr. Strange. The other is Druid’s love, Jillian, aka the Shadowoman. They are joined in the second issue by Cody Fleischer who is merged with the soul of Agamotto’s Pale Horseman to become the rotting hero known as the Cadaver. These three heroes remain the core of the Secret Defenders, as they team up with Deadpool and Luke Cage, Iron Fist and Giant-Man, Iceman and Archangel, and even the original Defenders (Hulk, Namor, and the Silver Surfer), over the course of ten issues. It’s a shame that Deadpool leaves so quickly; his bursts of random quips would been a welcome bright spot in a very serious book.  Yet it fits with a constant theme of the series- deception.

Throughout SECRET DEFENDERS, the heroes are constantly led and misled by outside forces. Writers Tom Brevoort and Mike Kanterovich have created a team that is filled with forced connections to each other. Dr. Druid is led by the visions of Dr. Strange, even as he keeps his own secrets from his team (like how he uses hypnotic powers to nudge Deadpool into joining them). Jillian, only recently transformed into the Shadowoman, constantly encounters oddities with her powers, such as surviving a mystic blast that should have killed her. She continually presses Druid for answers, but he stays tight-lipped; he is usually able to throw her off with the mission at hand. Of course, Druid never makes the connection between his actions and what Strange is doing to him. Just as Strange is controlling his actions and denying him freedom, Druid is manipulating his team. This makes for a trinity of characters controlled by mystic outside forces, since Cadaver is also tormented by his corpse body. His struggle is the most human, as Cadaver is still mentally alive, but trapped inside a decaying body his friends and family run from in horror. Like Shadowoman and Druid, he’s bound to the team with nowhere else to go, as he struggles with the shifting personality the Pale Rider’s spirit has left him with. 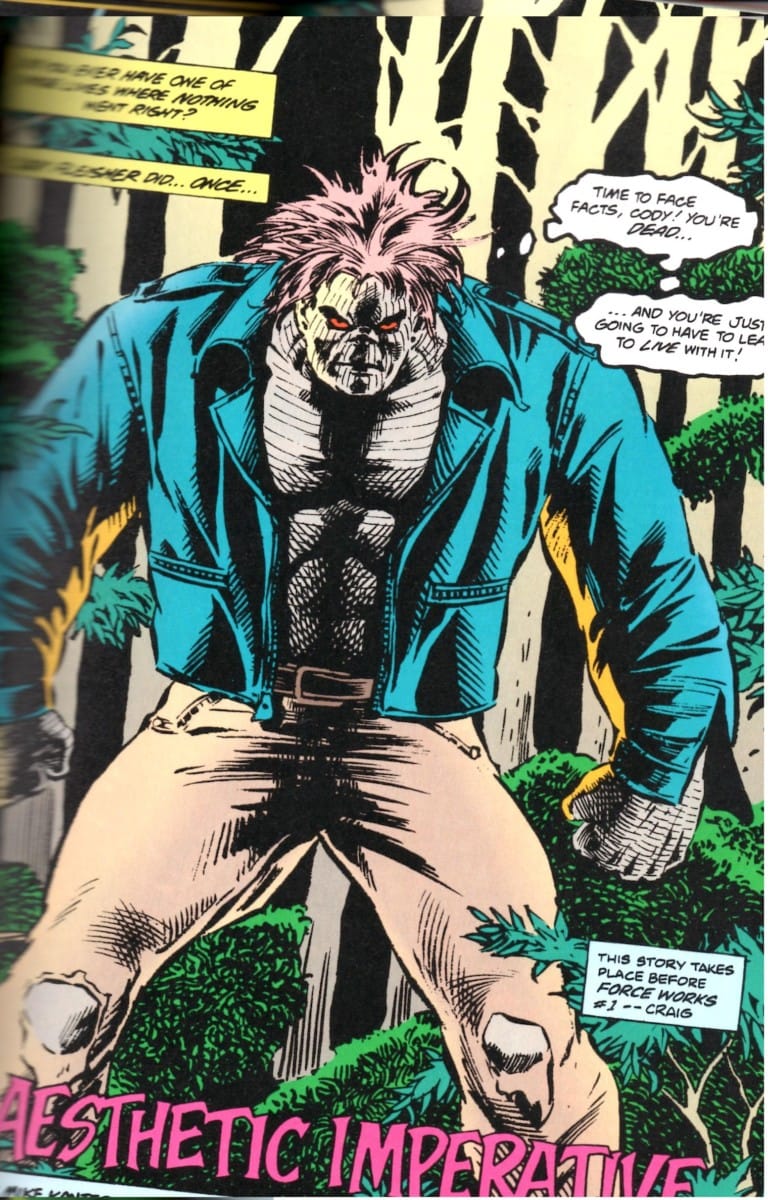 The deception and forced teamwork is what makes SECRET DEFENDERS such a fascinating read. This isn’t a team like the Avengers, where people willingly joined to fight evil or even the original Defenders who were more of a team of misfits. No, this is a team where choice isn’t a part of the equation. Sure, they fight evil, but this is a team that WAS assembled, not one that came together naturally. The main trio is forced to be together because of Dr. Strange’s machinations and because none of them can exist outside of each other. It puts a great deal of tension on the team, since everyone involved would rather return to their own lives. Druid constantly curses Strange for his visions, and Cadaver leaves to attempt to rejoin his family (no luck there). Shadowoman doesn’t try to leave, but she is bound by her connection to Druid who controls her in ways she doesn’t realize until much later.

In most teams, this could create a sense of bonding, a realization that all they have is each other to help survive (a lá DC’s DOOM PATROL). It can especially work well in a book like this, full of minor characters that writers can experiment more. It’s the kind of writing that can lead to something like GUARDIANS OF THE GALAXY – an unlikely team thrown together that forms real bonds. But SECRET DEFENDERS doesn’t reach that point. The group accepts each other, but they never come across as close teammates or say that they would remain together if they had a choice. It gives the comic a real sense of instability (rare for a team book), knowing that all the heroes are there through force and that secrets abound between the three of them. It’s something that permeates everywhere, especially in the team’s evolution.

Despite his talent for secrets, Druid (the team’s ‘leader’) manages to come across as still having good intentions, just trouble executing them. During the very first battle the team has, he goes invisible to observe from a different angle, which of course, makes the team think he abandoned them. He does return with a solution, but his arrogant assurances show serious flaws in how he approaches his leadership. Druid suffers more with his secrets with Jillian, namely how she was transformed and the role he played (and continues to play) in her life since. This does eventually lead to a serious blow-up and Shadowwoman’s transformation into Sepulchre, a dark version of herself (which still remains on the team). Cadaver almost functions as the eyes of the reader, since he is just as confused by the magical mishaps the team deals with as we are. It’s no wonder the team constantly rotates its lineup – the almost soap-opera level drama requires the forced bond the Secret Defenders share.

READ: Interested in the heroic undead? We have the latest updates for iZOMBIE!

The action and art of the series does help to balance the drama and secrecy. Jerry DeCaire and Bill Wylie take full advantage of the magical (and sometimes mortal) world they’ve been given, giving everything bright colors and definition (not always easy when a lead character is literally made of shadows). A true highlight is the depiction of Slorith, the entity that connects Druid and Shadowoman. Made of pure shadow in a realm of black, Slorith is perfectly rendered and terribly imposing. 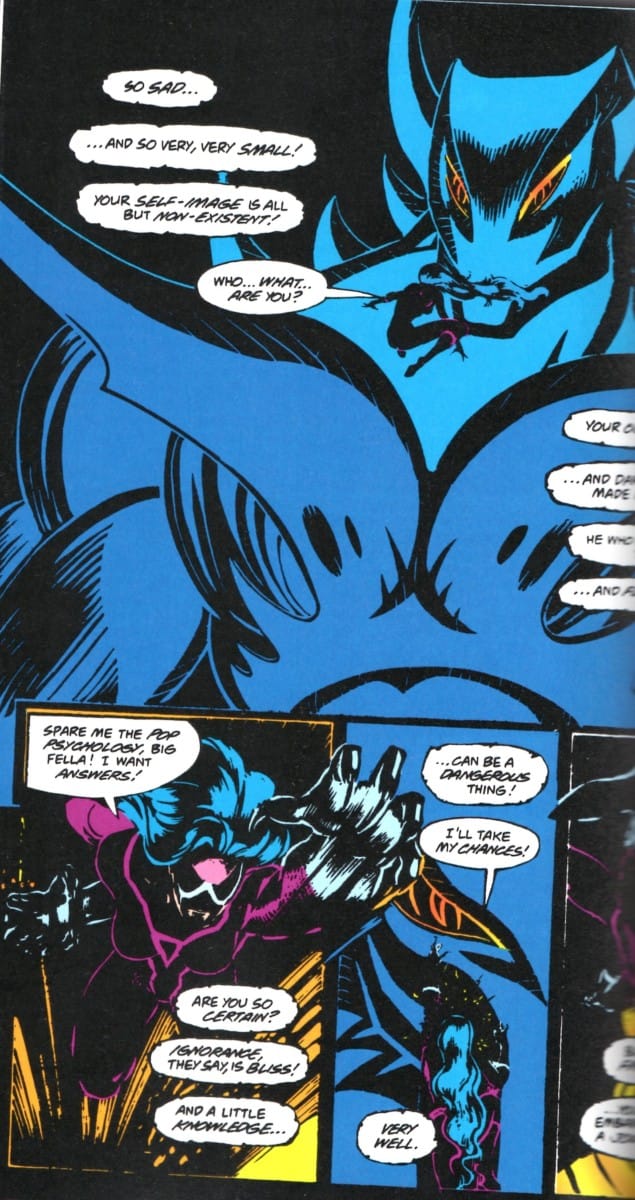 The fight scenes are also impressive, especially when against imposing forces like Swarm and Slorioth’s earthly form. Shadowoman’s attacks aren’t just globs of black on a bright page, they look imposing. Cadaver is mostly reduced to punches and his Sword of Bone, but he still comes across as physical. More importantly all the guest characters come out swinging as well, a difficult but crucial step in a team book like this. There are weaknesses, however. The 90’s style art does hold onto the overblown, and sometimes overly-fluid, design that was all over books of the era. One look at Luke Cage’s giant arms or the shadowy panels tell the reader right away it’s the 90’s. 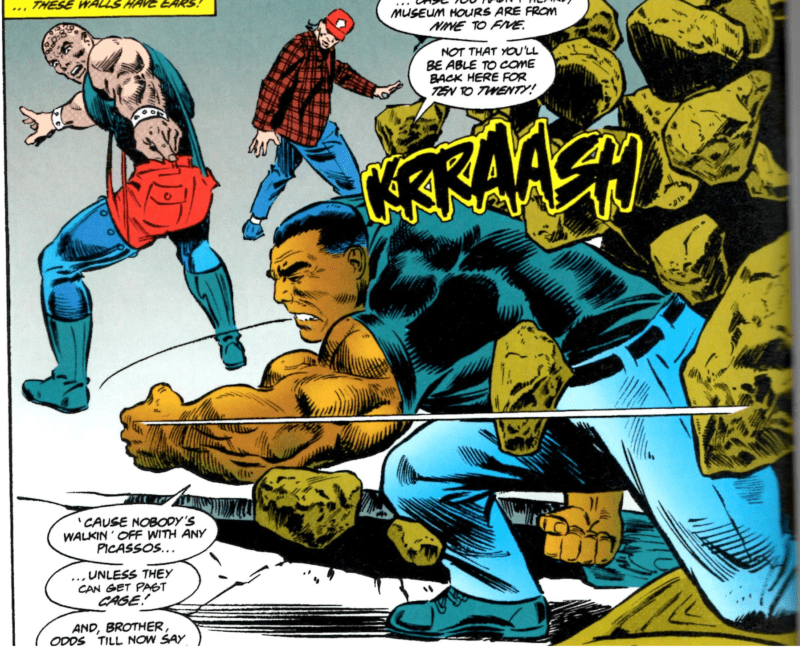 Since the series originally began in 1993, two years after the exodus of Marvel talent that would form IMAGE Comics, it’s not surprising. At the time of SECRET DEFENDERS’ publication, IMAGE had gained enough popularity that it was able to function as a fully independent company, after already nearly outselling DC with its original publisher Malibu Comics. It was unprecedented in comics, and such popularity always comes with imitation. Deadpool had already graced the book’s covers, so why not imitate the artwork of IMAGE too? The selection of artists is also of note. Jerry DeCaire worked freelance for Marvel, and Bill Wylie’s work on Marvel.com is rife with early 90’s art. It’s not hard to imagine Marvel having them imitate the style of it’s former talent (after already using said talent’s original character).

I picked up this book because I wanted to get a look at Deadpool on a superteam. I got it, but it got pushed away for a unique team book that truly acts as a representative of its time. The art is a prime example of the 90’s style, which is either nostalgic or grating depending on your own tastes. Still, this series has more than enough drama and magical throwdowns to keep readers interested. At the end of the day, that’s really all it should be, even if it tricks you into thinking it’s something else.