DEADPOOL AND THE MERCS FOR MONEY has been one of my favorite new series in the ALL-NEW, ALL-DIFFERENT Marvel lineup, as it relies heavily on a cast of lesser known Marvel characters. I’ve been a fan of Marvel for years, and I’m glad that this series has been good about showcasing characters I haven’t seen a million times already. DEADPOOL books are always better with an ensemble cast like this. It gives the Merc with a Mouth plenty of people to bounce off of.

Deadpool and his fellow mercs, Foolkiller, Solo, Stingray, Slapstick, Massacre, and Terror, have successfully sold their future-predicting robot to the Ozarks Kingpin. They enlist the help of the Highwayman, a demonic trucker, to help transport the ‘bot. Unsurprisingly, they are pursued by a pack of vicious mercs looking to take this powerful robot for themselves. This culminates during a hectic and hilarious chase scene which, as Slapstick points out, looks like something out of Mad Max.

I love this scene. Artist Salva Espin does a great job of creating a sense of madness in this chase that’s perfectly suited to a book with a questionably sane character like Deadpool. The desert road and stormy sky almost seem to have been infected by the insanity of the scene, presenting a high-intensity, pulse-pounding pursuit. I also love this spread because, as opposed to my experience with movies and TV shows, I don’t see a lot of car chases in comics. The stasis of the images in comics, as opposed to on the screen, allows you to slowly take in the scene.

READ: Check out our review of DEADPOOL #11!

Espin also demonstrates that he can convey motion well when the Highwayman crashes his truck through the wall of a truck stop and into Bruiser. The blurs around the edges really make the truck leap off the page. 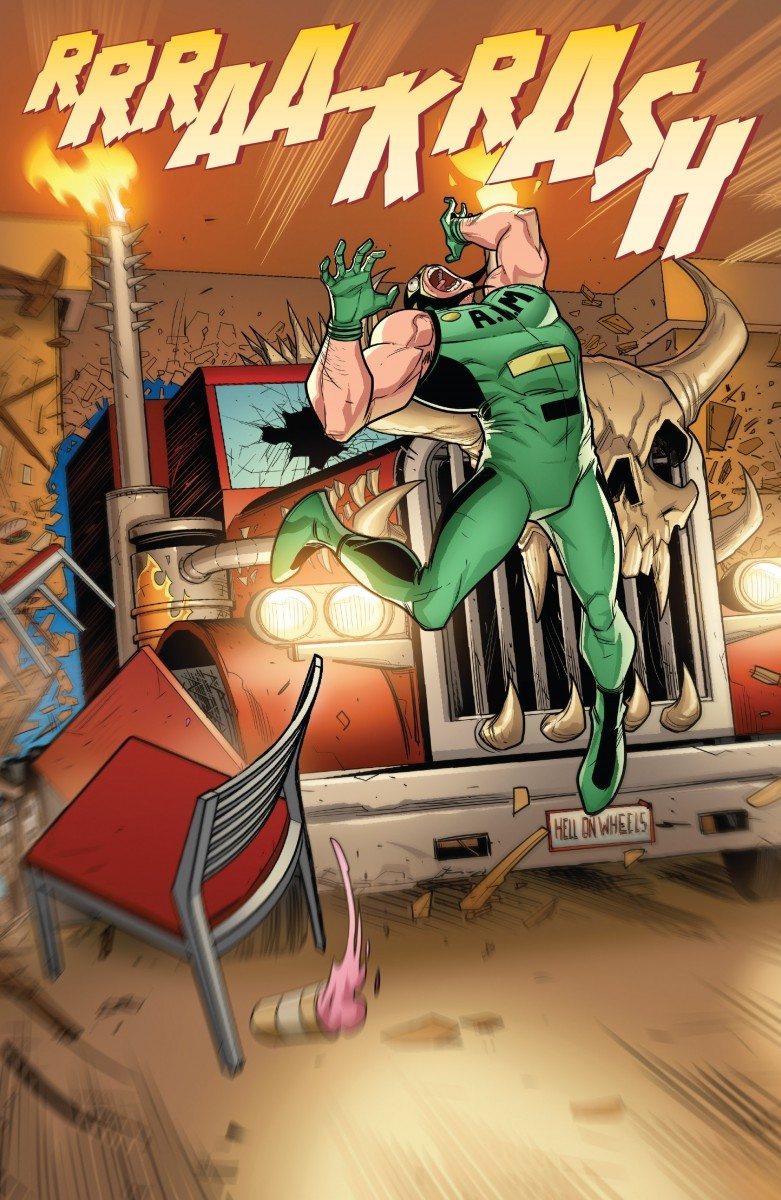 Plot-wise, once the Mercs for Money rolled up to the truckstop, the issue definitely slowed down. It quickly makes up for lost momentum by providing a nice comedic break. Deadpool claims that the truck stops are a sort of sacred ground and not open to attack. Clearly, he was wrong. Slapstick returns to wreak havoc on the Mercs for Money’s enemies after being run over by Highwayman’s truck in his typical cartoony fashion. Meanwhile, Deadpool is helpless to aid his mercs because he’s so enthralled by all of the violence. The action in this sequence restarts the carnage for the second half of the issue and packs in more jokes.

The past few issues have been focused on building tension and gradually bringing more characters into play. They set the scene for the explosive action in this issue. I enjoyed the building and release of tension. Changing the pace keeps everything fresh.

READ: Love Deadpool and Spider-Man? Check out our review of their crossover series!

In terms of characterization, this issue is great, as it lets the ensemble cast cut loose. It’s great fun to watch the Mercs for Money dialed up to eleven, trying to defend their shipment. The wisecracks don’t stop and do a great job of establishing relationships between characters. In previous issues, the sheer number of characters meant that not everyone was given an equal amount of attention.

Overall, this issue was great because it used characters well, and the plot had an ebb and flow thanks to the change in momentum. Things look pretty dire for the mercs, and I’m excited to see where they go next.