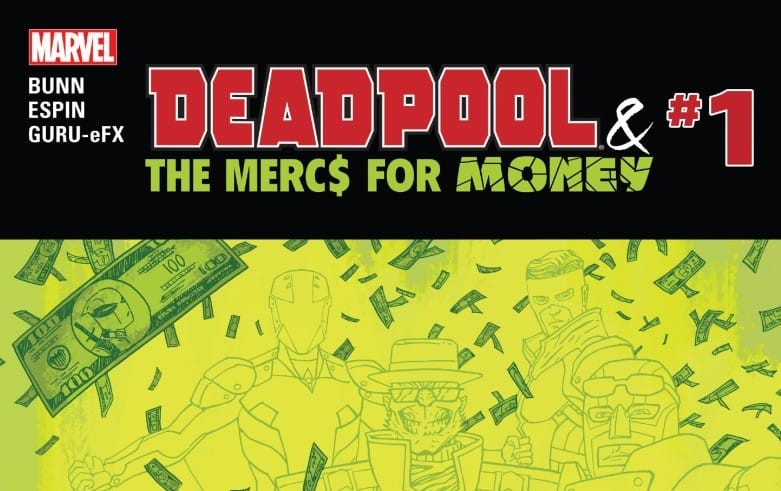 Deadpool has found fame and fortune. He’s also now an Avenger, hanging out with Cap and friends. But, the Merc with the Mouth is still, well… a merc.  If you’ve been reading DEADPOOL, the first five issues include his first attempt at a mercenary squad. Wade Wilson has taken to the idea of having a team, so, as a side job, he created his own mercenary squad made up of hired goons.

In DEADPOOL & THE MERC$ FOR MONEY #1, by Cullen Bunn, Salvador Espin, Declan Shavley, we see a new group of mercenaries led by Deadpool and without Madcap. The new roster includes Stingray, Terror, Greg Salinger: the Foolkiller, Slapstick, Solo, and Massacre. They all have their own unique set of skills, except Massacre, who is the Mexican version of Deadpool (unless you consider only speaking Spanish unique).

In the issue, we find our upstart team of mercenaries on a job for an unknown employer. We get thrown right into the action, as they steal an item from a heavily guarded warehouse, killing everyone in their way. At the exchange meeting, the mercs find themselves in an unexpected situation with a rival team of mercenaries, The Crazy Gang. The gang has their sights on the crate and need to go through the mercs for money to get it. 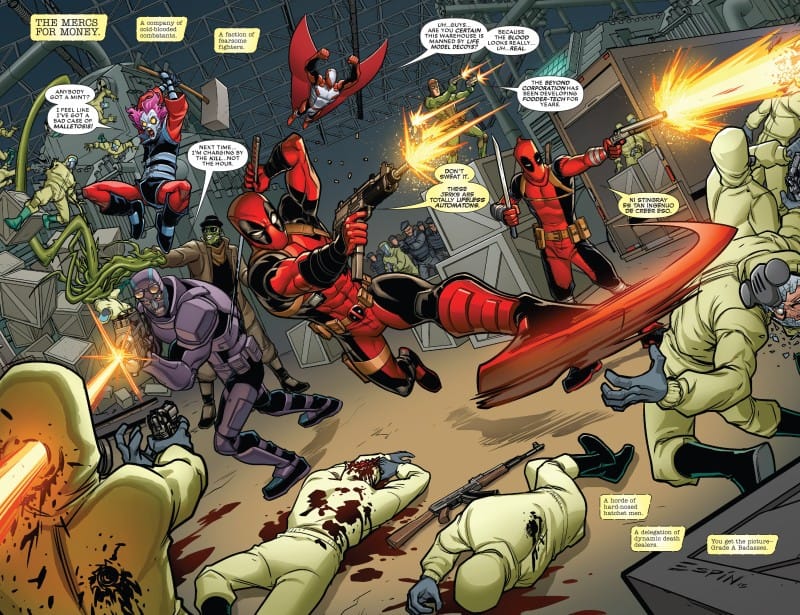 The story begins a new direction for Wade and his team as DEADPOOL #6 has shifted away from the present and the team. It’s nice to see Deadpool keeping up with his mercenary character traits while being a public figure and an Avenger, but it’s a bit disappointing that he’s doing it with a team. The team is a group of nobodies, with little to no backstory. Granted, this is logical, since nobodies who like money and killing would need something to do, but we don’t actually know who they are. They seem to just be thrown together for the sole reason that Deadpool wants a team.

READ: Find out more on the newest issue of DEADPOOL with our review of Issue #6!

There is a lot of goofiness and slaughter in this issue, which the art does a great job capturing. Salvador Espin is able to show the individual characteristics of the many characters. It’s sort of disturbing to say, but my favorite part of the art from this issue was the dead bodies. When a team featuring Slapstick comes through, it makes sense that the trail of carnage would include some people who look like they were chainsawed to death. That’s what I call attention to detail.

Overall, this was an interesting first issue. We get a good set up for a story about mercenaries. Of course they want money, so having something valuable in their possession is a smart road to take. I normally like Deadpool on his own, but his new team could add a fun dimension, plus a whole lot more insanity, as the story progresses. The next issue should unravel more on what the item they stole actually is and what it does. It looks like it’ll be sold to the highest bidder, and we’ll find out who is willing to pay for it.