It’s crazy to think that Deadpool turned 25 this week. If he was a real person, he wouldn’t be that much older than me, and we’d obviously be great friends. He’s a character I grew up with, and is one of my personal favorites. This issue establishes a fast-paced look at Deadpool’s psychosis. It also includes additional stories about each member of Deadpool’s new team of mercenaries. As good as it was to get this background info, I still feel it would’ve been better to do this sort of thing in the new DEADPOOL AND THE MERCS FOR MONEY series, which is off to a pretty great start, but more on that later.

READ: Want to see how Deadpool plays on a team? Check out our review of DEADPOOL AND THE MERCS FOR MONEY #1!

DEADPOOL #7 follows Deadpool on a quest to jog his memory by going through his grudge list, which takes him to everyone who has wronged him, from ninjas of The Hand to the person who told him Snape killed Dumbledore. It feels a bit chaotic, but, to be fair, this is Deadpool’s brain we’re talking about. Even though it’s a bit all over the place, it does cover a lot of ground and showcases just how sporadic Deadpool is as a character. I feel that this style of storytelling felt a bit rushed, and having so much variation of scenes page to page spread the issue’s focus a little thin. It has its moments, though.

The art in this issue provides a great sense of humor to match Deadpool’s. My favorite panel is the one that shows the blueprint of Deadpool’s new house. It feels like an I Spy puzzle from when I was a kid. There are plenty of fun little jokes thrown in, and this is the perfect format for that kind of thing.  Plus, I love that each issue is still being opened by Lil’ Deadpool directly addressing the reader. 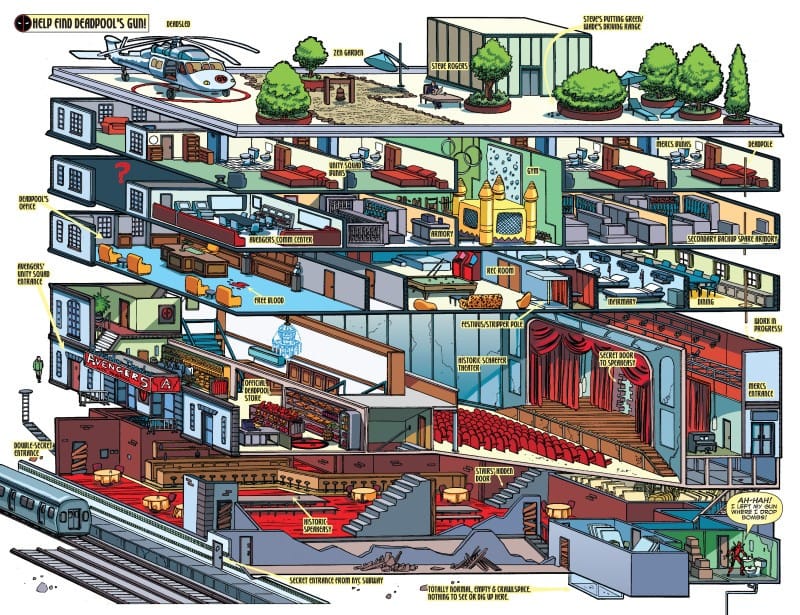 However, sometimes I felt that the faces of characters were drawn too cartoony. I’m fine with a cartoony style, but I felt that it took a away certain aspects of the characters that could have been emphasized if they were drawn more realistically. In certain panels, for example, Deadpool’s scars didn’t look nearly hideous enough.

The rest of the issue fell flat for me. It’s a multi-story issue, and I was excited to learn that. I was looking forward to reading some good Deadpool vignettes. My problem with the rest of the issue is that the 25th anniversary issue of DEADPOOL ends up not being largely about Deadpool.

READ: Don’t know where to start with DEADPOOL? Check out our 10 ESSENTIAL DEADPOOL COMICS!

We get individual stories about each of the members of the Mercs for Money. Each of these stories is about as long as the main grudge list story, maybe a little shorter. They’re all perfectly good and interesting enough stories, but as I said earlier, I’m not sure the 25th issue of Deadpool is the best place to do this. I understand the need for characterization, but this is Deadpool’s birthday. I was looking forward to it being his time to shine, and I feel that Deadpool missed out.

Of the Mercs’ vignettes, my favorite was Terror’s story. He’s an ancient immortal warrior who gains memories and abilities of people by attaching their body parts in place of his own. In this story, he has a gauntlet-clad hand that belonged to his lover centuries ago so he won’t forget her. It’s a sweet, romantic element told in a twisted way, and that’s why I love it.

This issue was very hit-and-miss, but even though the misses were pretty rough, I really enjoyed the hits. It’s definitely not as great as I’d like a 25th birthday issue to be, but all in all, it’s not too shabby.