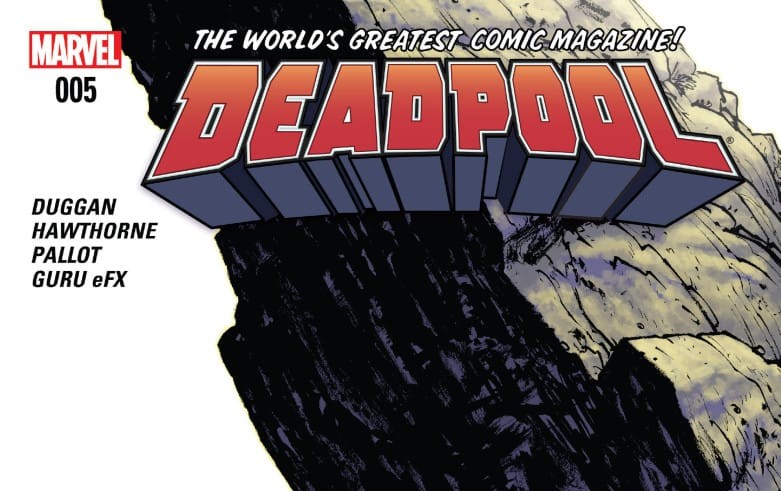 The Mercenary business is booming. So much so that Deadpool has had to hire other mercs to dress up as him to take on jobs while he’s busy bankrolling the Avengers. One of the new ‘Pools has been running amok trying to tarnish the good reputation and fame Deadpool has finally achieved. Worse still, whoever it is has released a chemical that sends any Deadpool fans into a berserker rage.

In this issue, we finally find the culprit, Madcap! Knowing he wants to take every from him, Deadpool uses his own daughter as bait to lure Madcap into the open and has Quicksilver whisk her away to safety in New Jersey (of all places) before Madcap’s bullets hit their mark.

Madcap spent some time literally trapped in Deadpool’s mind, which drove him to try and destroy him. All of Deadpool’s inner hatred was transferred onto Madcap, as Madcap watched Deadpool have adventures as an Avenger and build friendships, something Madcap always wanted but never had. One of Madcap’s abilities is a total immunity to pain, but being inside Deadpool’s tortured mind was too much for him to bear.

This culminates into an intense fight scene with Deadpool (and his new crew of mercs, each with their own Deadpool suit of a different color) ganging up on Madcap. It’s pretty intense scene, fraught with mutilation followed by regeneration, followed by more mutilation and more regeneration. Deadpool doesn’t make many jokes during this fight, which is swapped out for Madcap calling Deadpool “a stain on my soul I can never cleanse.”

Yikes. Someone’s pissed they didn’t get any chimichangas.

Just before Deadpool is able to trap Madcap’s body into a box where he can’t heal himself back together, Madcap turns a Chitauri hand cannon on himself. Deadpool attends to his adoring fans, and subsequently punches out every picture of himself in his new mansion, showing he is still full of self-loathing.

The thing I love about Deadpool is the kooky yet bloodthirsty villains he tangles with. We’ve seen him fight the craziest of villains- undead Teddy Roosevelt, an evil version of himself made out of his severed limbs stitched back together- and Madcap is no exception. He’s Marvel’s answer to the Joker- a person who driven to the brink of insanity after losing everything and dedicates their life to destruction. Couple that with a healing factor much faster and stronger than Deadpool’s, and you’ve got yourself a great villain. What also makes him a great villain is that the reader understands his motivation. 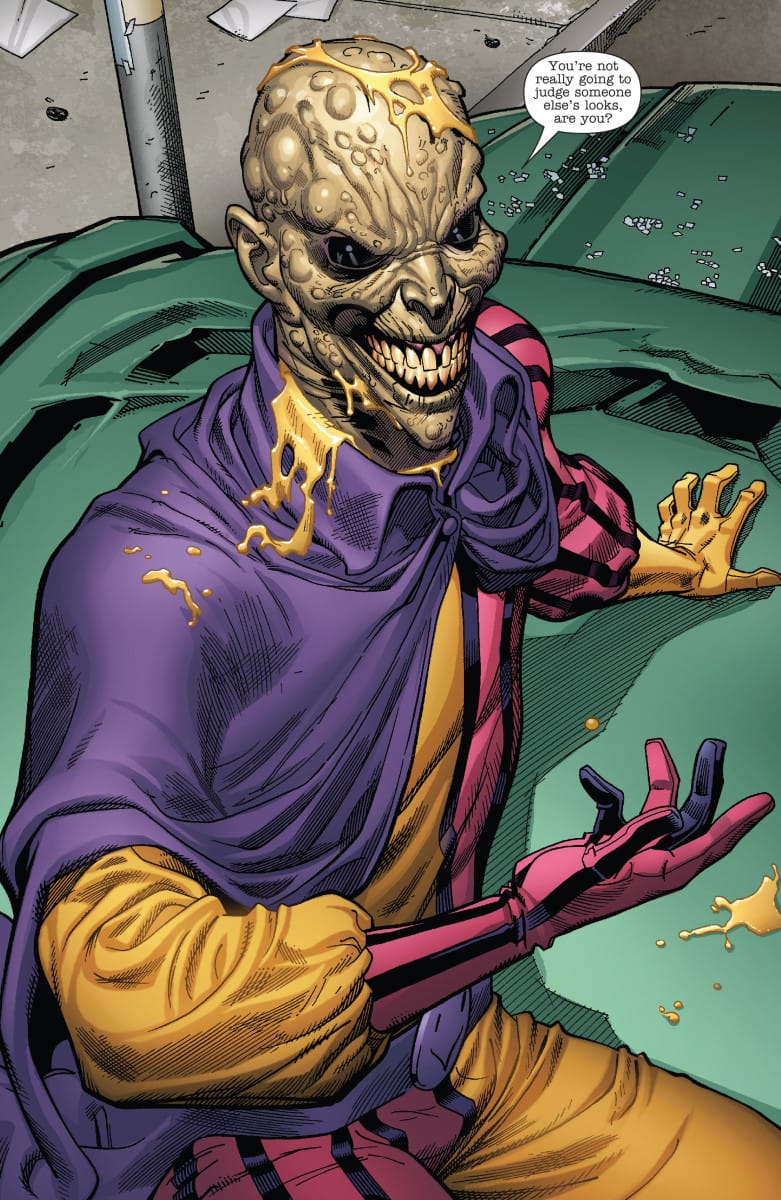 Madcap can’t feel pain. We see Madcap repeatedly stabbed, shot, and even thrown off a building by Deadpool in this issue, but being trapped in Deadpool’s head was the first time he ever felt pain. This makes sense as no matter how many enemies he has, no one hates Deadpool as much as Deadpool does. Deadpool essentially focused all his self-hatred from his inability to maintain friendships, constantly scarred face, and failure to protect those he loves onto Madcap. This corrupted him and made his face the gray grin we see once Deadpool pummels his mask off. This turns Madcap into what he tells Deadpool is “a less-annoying, more lethal version of you.”  His only goal is to hurt Deadpool. This simple desire to cause damage and the fact that he can out-heal and out-crazy Deadpool is what I loved most about Madcap.

The art in this issue is great, particularly Madcap’s costume and it’s deterioration throughout his fight with Deadpool. Once his brightly colored threads are shreds, his horrific face is revealed. This ugliness beneath a cheery exterior is what Madcap is all about, and it was a great artistic choice.

The last panel of the comic is perhaps its most powerful, showing shards of glass embedded in Deadpool’s fist from smashing pictures of himself. It’s a profound way of illustrating his self-hatred and inner conflict.

Deadpool is heading in a direction we’ve never seen before. He is finally liked by people who don’t even shy away when they see him without his mask. Instead of seeing a battle to earn the respect of others, he must maintain it despite his still-damaged psyche. He’s also in a leadership position, marketing his own image and funding the Avengers. Seeing our beloved and downtrodden goofball finally on top, I admit, is pretty strange. Having other mercenaries dress up as Deadpool and even speak in his trademark yellow word bubble also feels a bit off. However, I’m excited to see where this new Deadpool ends up, and I think it’s a really interesting direction to take him in.