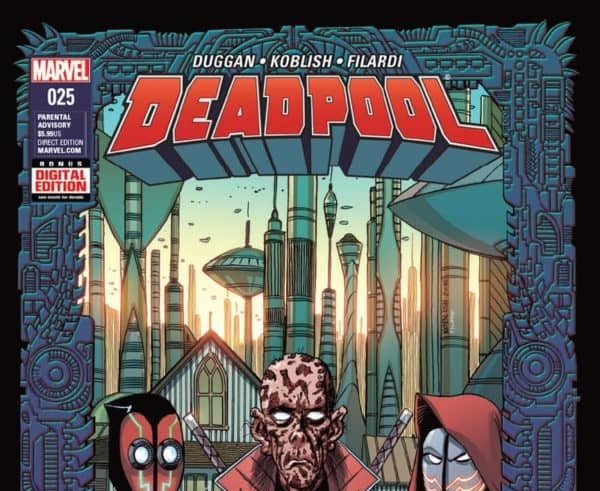 Once again, we get the story nobody asked for — Deadpool in the year 2099. I always forget that this arc is happening long enough to be surprised whenever a new installment of it is released. For those who haven’t kept up, issues of the Deadpool 2099 story have been released in between arcs of the main storyline. This is frustrating for several reasons. First of all, because this is DEADPOOL #25, it’s a double issue to commemorate this milestone. We’re forced to deal with twice the uninteresting narrative. It interrupts the regular flow of the events of DEADPOOL. It’s frustrating to have to go back six or seven issues to be able to understand what’s going on in the current chapter.

Readers forget it’s ongoing because it gets released so infrequently. The series, in general, is pretty forgettable because there’s so much information crammed down the reader’s throat in one issue. Before you know it, DEADPOOL is back and onto a new arc. None of the events happening present-day seem to have any effect on the ones in 2099. This makes it difficult to care about what’s going on.

READ: Wonder what Deadpool’s been up to with his pal Spidey? Check out our review of SPIDER-MAN/DEADPOOL #13!

DEADPOOL #25 picks up the story of Warda Wilson, daughter of Wade Wilson, rampaging through a futuristic city. She wants answers out of her father about what happened to her mother, Shiklah. These actions felt more like a hissy fit than a rampage, which made me dislike Warda. Wade jokes that he’s trying to stop her temper tantrum, and that’s not too far from the truth. At least the way I see it. Warda and her henchmen face off against Wade and the Iron Fists as Warda unleashes one of her mother’s sleeping monsters into the city. 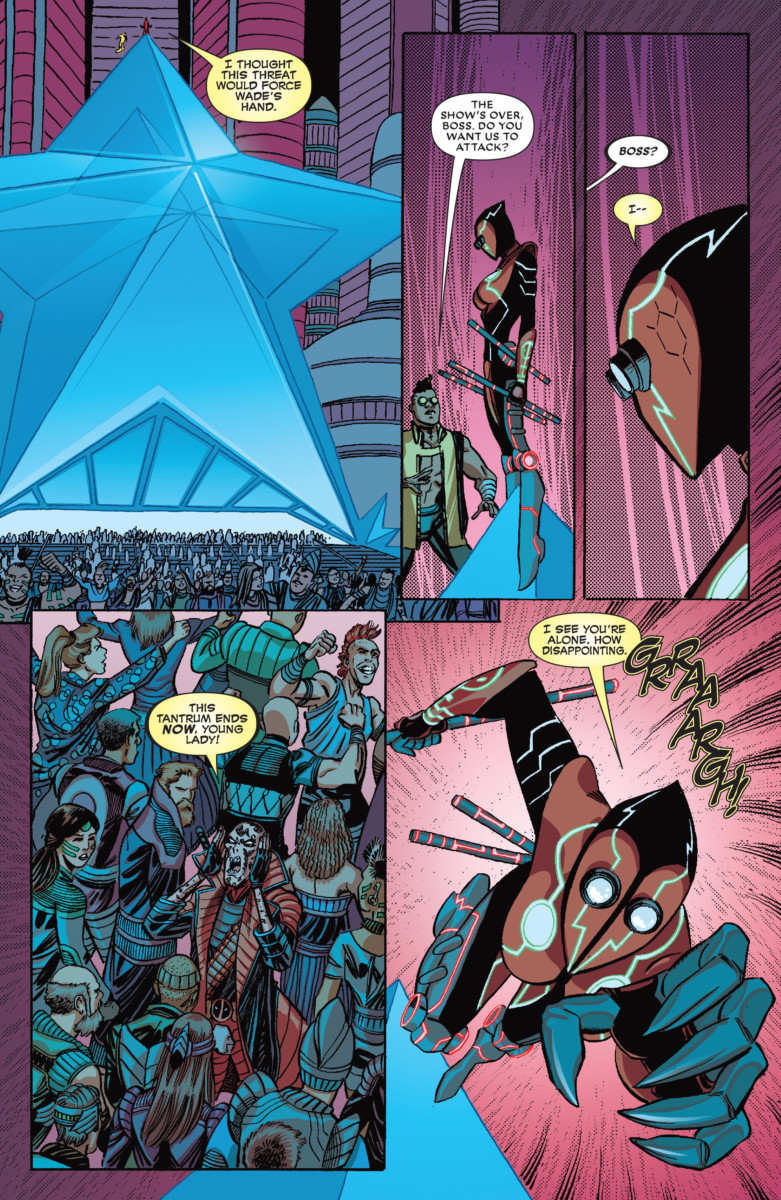 As fun as it is to see so much action, I can’t help but feel that it’s trying to distract from a weak plot. Wade can barely remember what happened to Shiklah. The main conflict is Warda trying to jog his memory of these events. We don’t get to see Shiklah’s annexation of New York — Wade tells us about it. Telling a reader about something isn’t nearly as exciting or rewarding as being shown it firsthand. Even the art of this issue was more focused on being flashy and futuristic than it was on telling a story. If DEADPOOL #25 were focused on storytelling, we would have seen Shiklah’s assault on New York instead of Wade standing there and telling us about it.

READ: Get caught up on all things DEADPOOL with our review of issue #24!

Plot-wise this issue, like ones before it, writer Gerry Duggan throws more and more details at the reader before they have any time to process them. In addition to Shiklah’s attempted annexation of New York, we learn that Ellie, Wade’s other daughter, is a mutant, Iron Fist is still around and has amassed his own army to fight Warda, and the Avengers have destroyed the Skrull homeworld by the year 2099. That’s a lot to process in the course of an arc, let alone one issue. Just like the art, the plot is flashy for the sake of being flashy. This deprives the reader of events worth emotional investment. 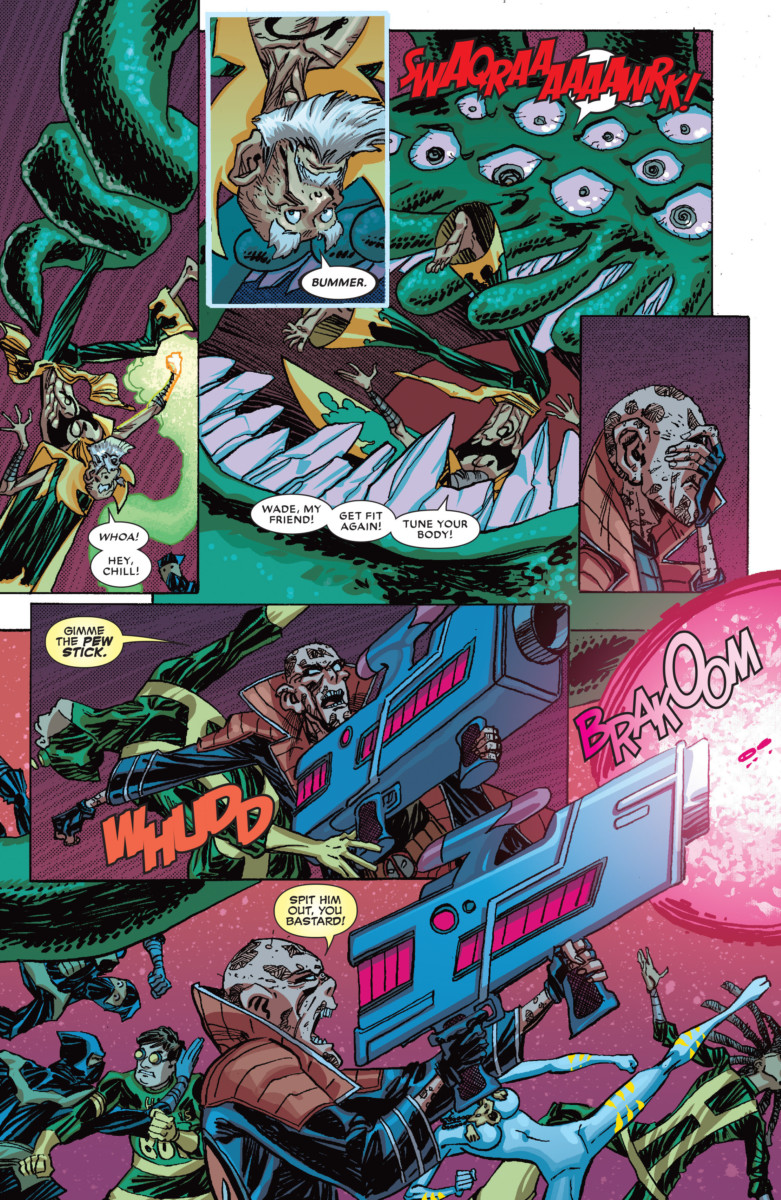 That being said, the art is pretty fun to look at. Scott Koblish’s pencils are clean, and he clearly had a lot of fun dreaming up all the crazy gadgets. The futuristic technology is cool, and even though the monster design isn’t totally original, I’m always game for giant monsters appearing in comics. If you’re looking for some cool stuff to look at, this issue delivers that. But not much else.

READ: The latest scoop on the DEADPOOL movie sequel!

That’s been the problem with DEADPOOL of late — luckily it has gotten better in recent issues. However, it took me a while to get back into the series because it was often concerned with spectacle over story. Hopefully, future issues learn from this Deadpool 2099 experiment.