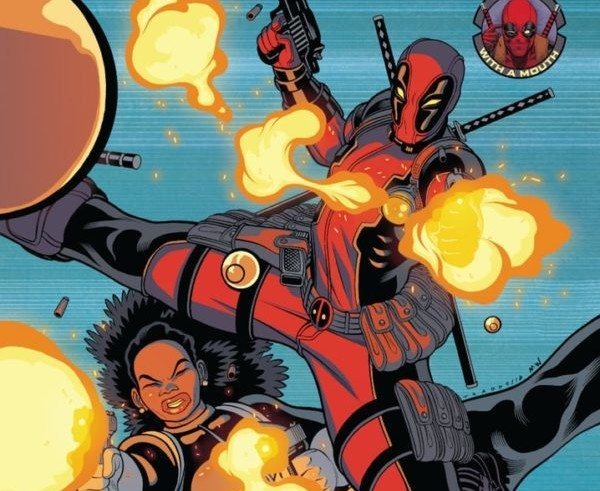 It’s no secret that I’ve had mixed feelings about the new run of DEADPOOL. At times, the character’s commercial success has created a version of Wade that’s practically a parody of himself. In DEADPOOL #24, however, hit the nail on the head by combining bloody violence with Deadpool’s trademark humor. Past installments have accomplished this much, but the difference with this issue is how it deals with Deadpool’s motivation. He’s fighting for his family’s safety, and for once, he gets to be the hero. Well, as heroic as the regenerating degenerate can be.

Madcap has tricked Deadpool into infecting Agent Preston’s husband, child, and his estranged daughter with a deadly bioweapon. Deadpool managed to save them by making a deal with the villainous time-travelling Stryfe, and now, it’s payback time. He’s able to track down Madcap using a cell phone transmitter, and Preston comes along to help him open a sixer of whoop-ass.

The most satisfying moment comes when Preston airdrops Deadpool into Madcap’s hideout. They both know Madcap is listening to them, so Preston acts as if Terry and the kids have died from the bioweapon. It’s a great use of dramatic irony. Madcap thinks that Preston is going to kill Deadpool for failing to protect Terry and the children, but the reader knows that if anyone needs protection, it’s Madcap. This shows a masterful combination of plot and characterization to create a thrilling read. The events of the plot tease the readers because we’re in on Deadpool’s ambush against Madcap, and Preston’s fake sobs show how they’re both brilliant tacticians. 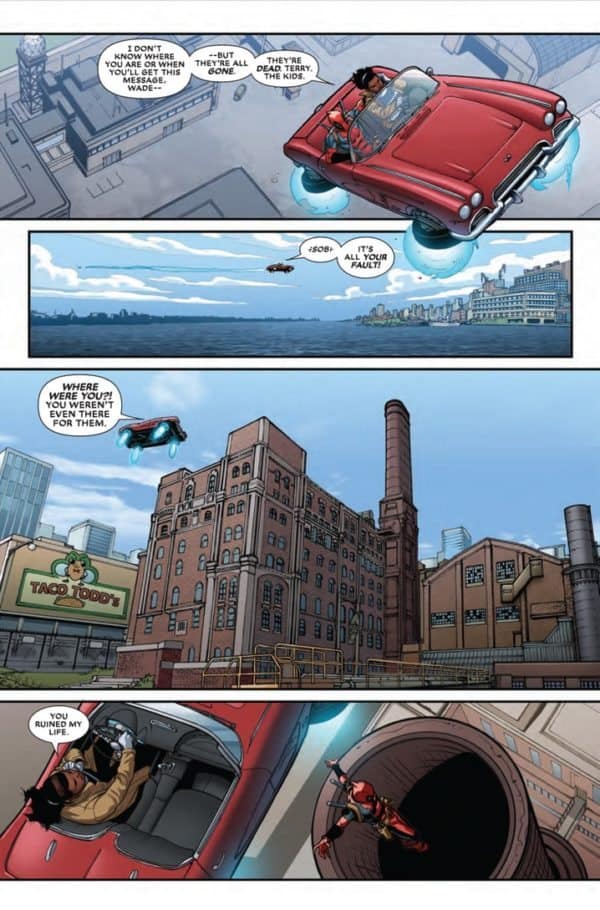 From the moment Deadpool slides down that chimney like a murderous Santa Claus, all hell breaks loose. Deadpool is in a mood to bring some ruckus, and luckily for him, he doesn’t have to hold back because Madcap has Hydra henchmen working for him. The art is fantastic in this action sequence. Lots of blood, guts, and fire all around, just the way it should be in this book. Personally, I think Deadpool has held back in his recent volumes. Between bankrolling the Avengers and being a married man, we haven’t seen much of his lovable disregard for morality and human life. Here, a Hydra agent throws down his weapon and begs Deadpool to arrest him. In classic Deadpool fashion, he says “Ain’t nobody got time for that,” and summarily executes him. 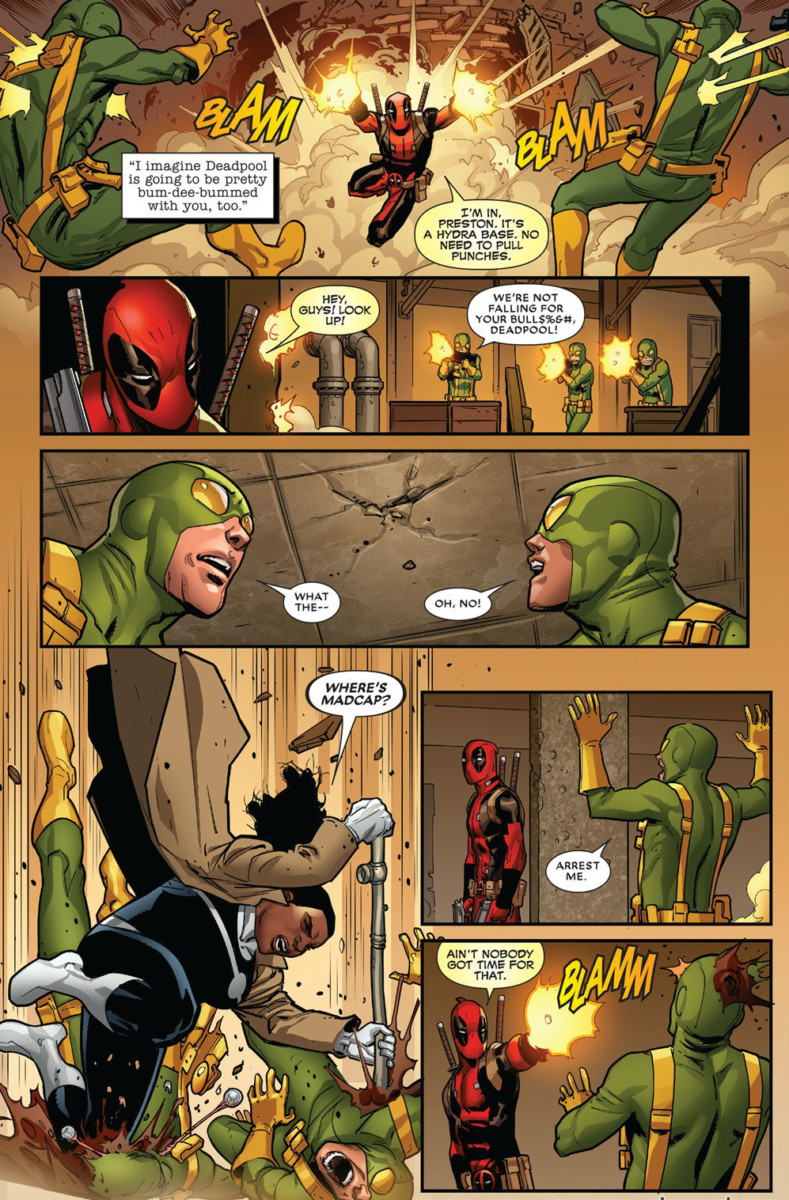 This issue taps into what makes it fun to read a DEADPOOL book—watching our favorite Merc with a Mouth go on a rampage. Writer Gerry Duggan has packed this issue with quips and violence, which becomes in many ways, at least for me personally, cathartic. We’ve all wanted to go nuts at one time or another, and this book, when done well like it was here, gives us a means of escapist fantasy. Comics aren’t all about escapism—they can cover a wide variety of serious and relevant topics—but there’s nothing wrong with having a little fun every now and again.

The strongest work of artist Matteo Lolli’s was his depiction of Madcap. It’s finally revealed that the person to whom Madcap has attached his half-regenerated self to is none other than Agent Bob of Hydra. Lolli does a great job of making him look like he’s always disintegrating, which adds a great sense of motion to the book. His blood splatters also seem to ooze right into the reader’s lap. That’s nice too.

Overall, this issue was a fun and fulfilling read. I’ve had my concerns about this book in the past because of how his recent popularity overpowered every other aspect of Wade’s character that has made him one of my personal favorites. After reading this issue, it seems that this series is in better hands now.