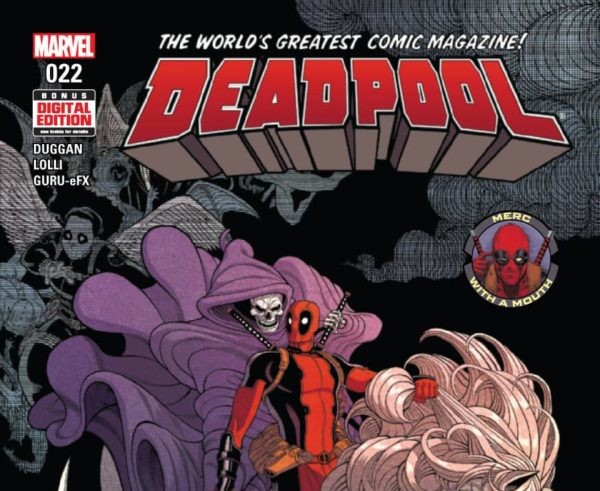 Deadpool is back from the dead — for like the millionth time. DEADPOOL #22 opens with Deadpool on the autopsy table of the morgue — with most of his internal organs outside his body. But this is a minor setback for the Regenerating Degenerate, who was apparently killed by a super virus Madcap unleashed on him last issue. His troubles pile up as he stumbles back home to discover he hasn’t paid contractors doing repairs on the Avengers tower. In pursuit of cash, Deadpool hits the racetrack to play the sport of kings. But that’s only the first of his problems. 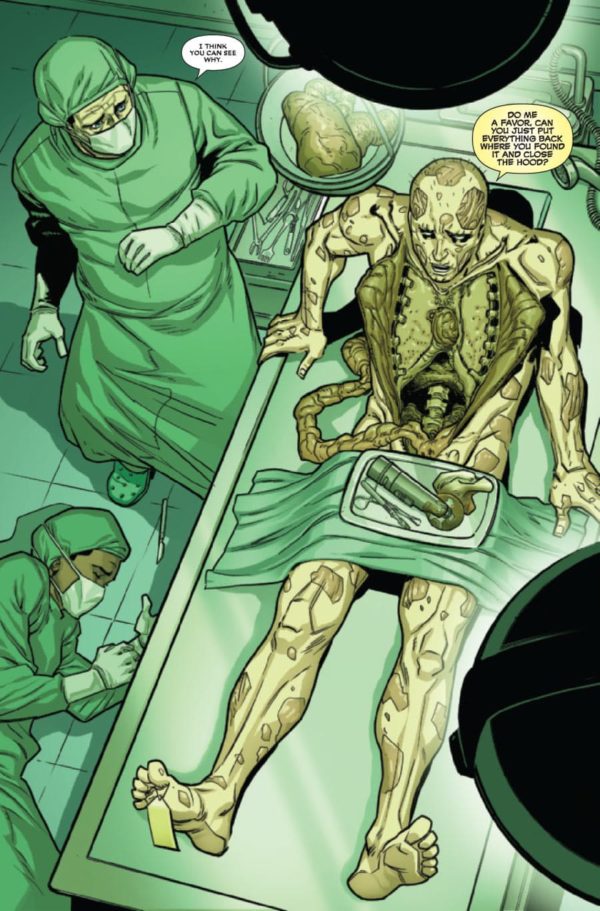 Deadpool decides to cut out the middleman of betting on horse races and go straight to the source — he dons a Spider-Man costume and robs the racetrack safe. The best part of this for me is that he sings a modified version of the Spider-Man theme song — “Spider-Man, Spider-Man, steals whatever a spider can.” It’s classic Deadpool — doing the right thing (paying his contractors) the wrong way (committing robbery and pinning it on Spider-Man). There’s a lot of great action in this sequence that reminds us Deadpool doesn’t always need guns or swords to kick ass. He easily overpowers three armed guards barehanded.

READ: Need to get caught up? Read our analysis of the previous issue!

After paying his debts, Deadpool heads for some quality time with Agent Preston and his daughter. They all gather ‘round the table for a hearty home-cooked meal. It’s a heartwarming sequence. Deadpool is so sweet to his daughter, and she doesn’t seem to put off by his facial scars. But suddenly disaster strikes when Deadpool gets a call from SHIELD, who warns him that someone has infected the coroners from the morgue with a bio-weapon that infected his costume. The disease gave the coroners a hemorrhagic fever and killed them. Deadpool looks inside to see that his daughter has been infected with the same fever. Madcap said he would destroy Deadpool last issue — and now he’s come after his family.

Artistically, this issue did a great job. The action sequence I discussed earlier was dynamic and intense. Matteo Lolli showed his range by later conveying a cozy family winter scene. Deadpool “corrects” some of the Christmas decorations outside to make Santa and Frosty swordfight each other with candy canes. These lighthearted and comfortable settings make it all the more devastating for us when we realize that he has infected his family. It’s a powerful juxtaposition and plays the reader’s emotions like an instrument.

Seeing Deadpool slowly realize that he was responsible for spreading the infection to his daughter was devastating. My heart breaks for him. Contrary to the aloof personality he fronts, he does actually care about people. The fallout of this attack also highlights Madcap’s villainy — he’s already killed Deadpool once, but he knows that he’ll eventually recover from that. So he finds new ways to make him suffer. It’s great characterization, and the most fascinating part about it for me is that Madcap never even physically appears in this issue. We learn all this about him from the fallout of his attack. 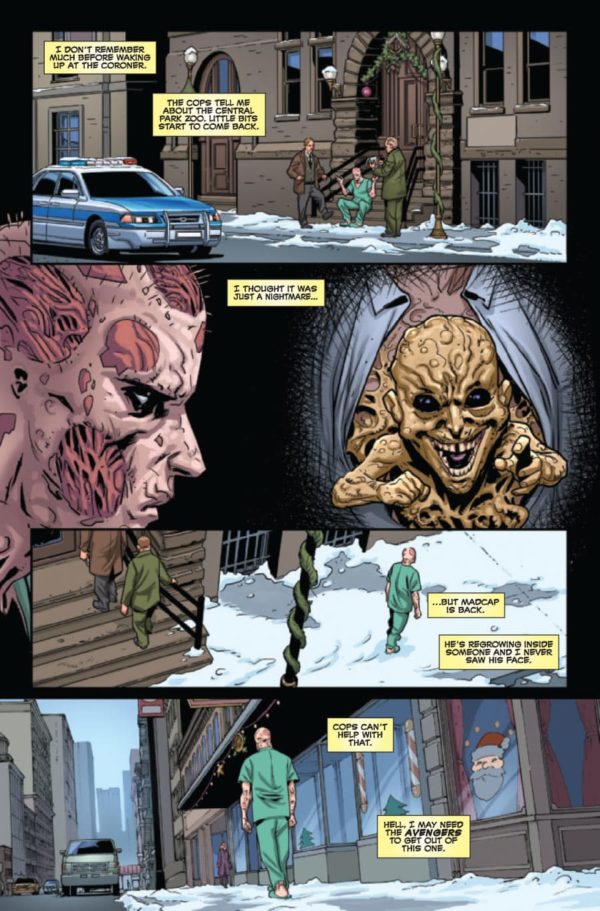 As far as plot is concerned, this one is pretty simple. But that’s a good thing. I’ve been saying for months now that this title needs to take its time and let the characters do the storytelling, and this issue did that extremely well. Things flow naturally. Deadpool is given the proper breathing room to be his funny, mischievous, sincere self in this issue and we love him for it — just as we despise Madcap for being conniving and sinister.

READ: Our latest news on the sequel to Deadpool’s movie!

DEADPOOL #22 was an excellent follow-up to the events of last issue. The humor in the first half contrasts sharply with the emotional turmoil of the second. Most importantly, this raises the stakes for the next issue. It’s great storytelling and I’m excited to see what unfolds.