At long last, we’ve been graced with a good DEADPOOL issue! This issue takes Deadpool seriously while keeping his sense of humor. Understandably, it’s a fine line to walk. I couldn’t be happier the balance between humor and heart has finally been struck.
This issue starts out as dark as they come-a young woman named Danielle is standing on Deadpool’s roof, prepared to jump. The first line of dialogue is Deadpool yelling, “DON’T JUMP”, at the top of his lungs. Deadpool goes out of his way to help the clearly troubled Danielle, saying that if it’s her last night on Earth, she might as well make it fun.

READ: Need to get caught up? Read our review of the previous issue!
Deadpool and Danielle hit Broadway–or more specifically, Deadpool knocks out two rich snobs so they can take their seats for Hamilton. After the show, Deadpool takes Danielle along for patrol to help her solve her problems–Deadpool-style. 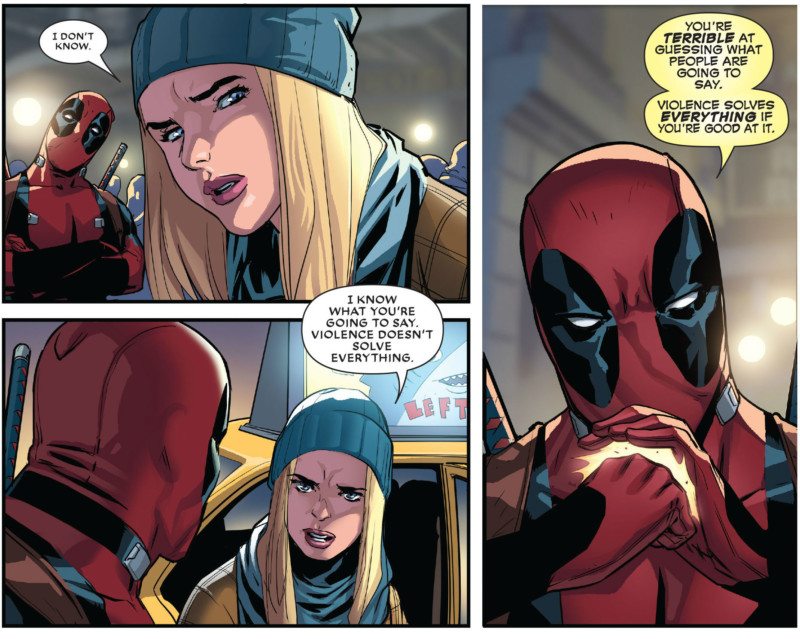 The dialogue shines through in this issue. It sets a great tone–Deadpool is genuinely trying to help Danielle by taking it out on other people. He has other methods of showing compassion, but this is the one he has the most fun with. As messed up as that is, it appears to offer Danielle a sort of catharsis she previously didn’t have before. She joins Deadpool in beating on baddies, and she gets pretty good at it. 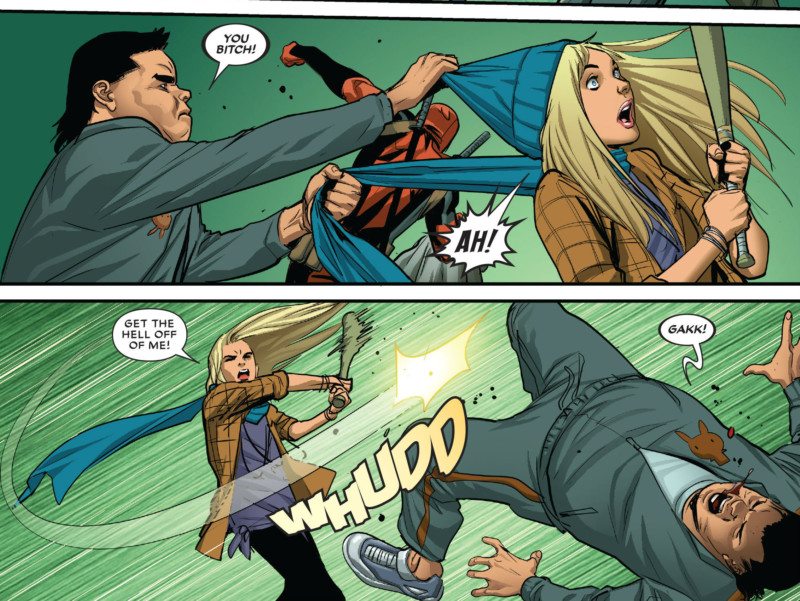 I loved the plot of this issue. The simplicity of DEADPOOL #20’s plot allows writer Gerry Duggan to explore the intricacies of Deadpool’s character. I’ve often complained that previous issues of DEADPOOL have fallen flat because they’ve tried to do too much–this issue was successful because it picked a simple plot and stuck with it. You don’t need a lot going on to show how off-the-wall and funny Deadpool is–in fact I’d argue that less complex stories like this one are better examples of his true nature. He’s more authentic because the story is born from his character instead of external plot points. That’s why the characterization was spot-on. There were many sweet moments, but there were Deadpool’s version of sweet–meaning there was genuine sweetness present, but it was in his own unique way; layered with corny jokes and flippant violence. Deadpool does come out of his shell at the very end by giving Danielle the help she needs. 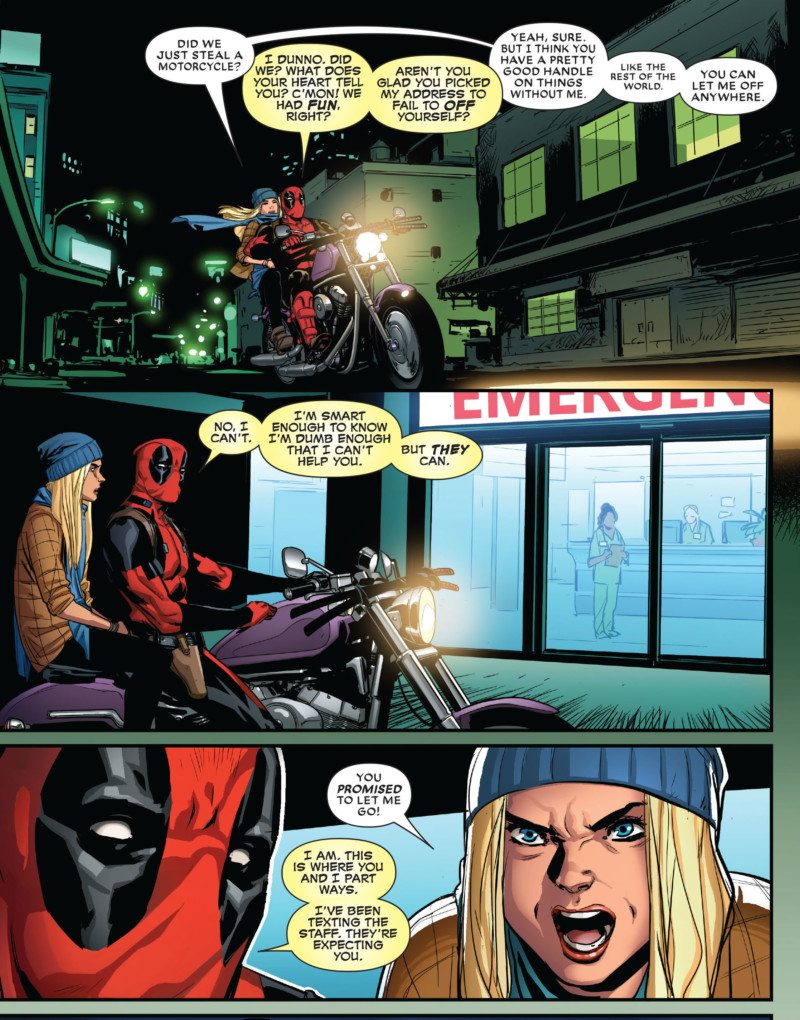 I can’t believe I’ve gone this far into the review without mentioning how great it is to see a discussion of mental health in comics. It teaches people that even at their lowest point, they are not alone, and there is always time to improve. I think the most important part is that Deadpool emphasizes to Danielle that she’s not crazy–she just needs a little help, and there’s no shame in that, which is a super important message a lot of people need to hear.

READ: Wonder what Deadpool’s been up to with his best pal Spidey? Read our review of their team-up series!

Artistically, this issue shows its strength most during moments of action. Matteo Lolli does action scenes really well–his speed lines and blurring of the background add a palpable sense of kinetic energy to this panels. Apart from that, there isn’t too much else to say about the art in this issue. It holds up, it tells the story, but there’s not too much here that I haven’t seen before. It doesn’t need to be about the art for this issue, because the characterization and plot have finally been effective.

I really hope that future issues will stick to this formula of a undemanding plot, because it lets characters do the storytelling. A character like Deadpool could be put into any scenario and produce an entertaining narrative. Hopefully positive reception of this issue will reinforce this kind of storytelling for DEADPOOL in the future.