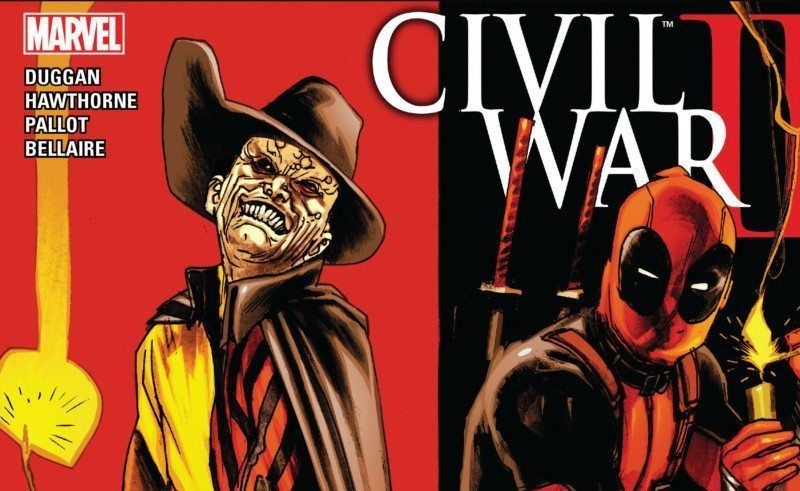 It’s no secret I’ve had mixed feelings about the new DEADPOOL series. It has taken the focus away from Deadpool’s more compelling character traits, like his self-loathing, in the name of writing spastic chimichanga jokes every fourth panel. This issue, despite having one of the most blatantly misleading covers of all time, was actually a decent Deadpool story. We get to see the fallout of all the past issues catch up with him. After seeing him at the top for so long, it’s nice to see him gradually return to the disrespected degenerate we all know and love.

Once Deadpool and his Mercs for Money are freed from the safe they managed to lock themselves in last issue, all hell breaks loose. The Mercs are still furious Deadpool has been cheating them out of payment, and he is attacked on all fronts. Bullets are sprayed, grenades are thrown, and lunch is lost in a parade of grossness and violence as only a Deadpool comic can deliver. I loved this sequence because I felt it got to the heart of the series by being equal parts gross, violent, and funny. 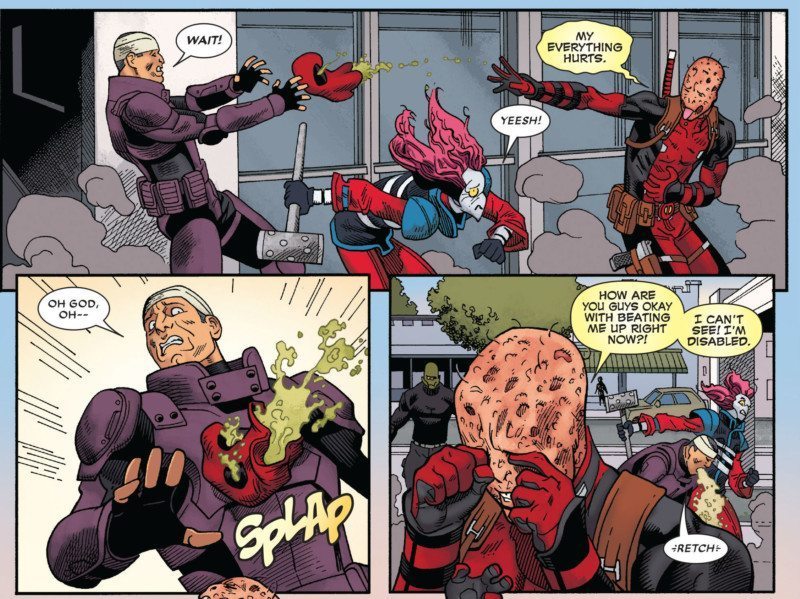 When the dust settles, Agent Preston has hogtied Deadpool and the Mercs and taken them to a court hearing, where they are all ordered to leave the state at once. And with that, the Mercs for Money officially disband.

Things only then get worse for Deadpool. Agent Preston forbids him from seeing his daughter. When he gets home, he finds his wife cheating on him with a werewolf. It’s as rock-bottom as we’ve seen Deadpool in a while, and it’s why I liked this issue so much. He is at his most authentic when people don’t take him seriously because it gives him something to prove to people.

READ: Wonder what Deadpool has been up to with his best bud Spider-Man? Read our review of their crossover series!

Having something to prove leads to more of his classic crazy antics. We root for him because we can relate to that struggle–we’re all guilty of wanting people’s approval, and for me, that was the most authentic and relatable part to his character. Without it, he’s an obnoxious loudmouth with an affinity for guns and Mexican food.

The character development in this issue works well because it showed Deadpool actually being affected by the events around him. Previously Deadpool had been cavalier about all the destruction and strife he has caused, but we are now seeing it affect him emotionally. Deadpool is clearly furious when he tells the Mercs for Money not to interfere with any of his jobs. 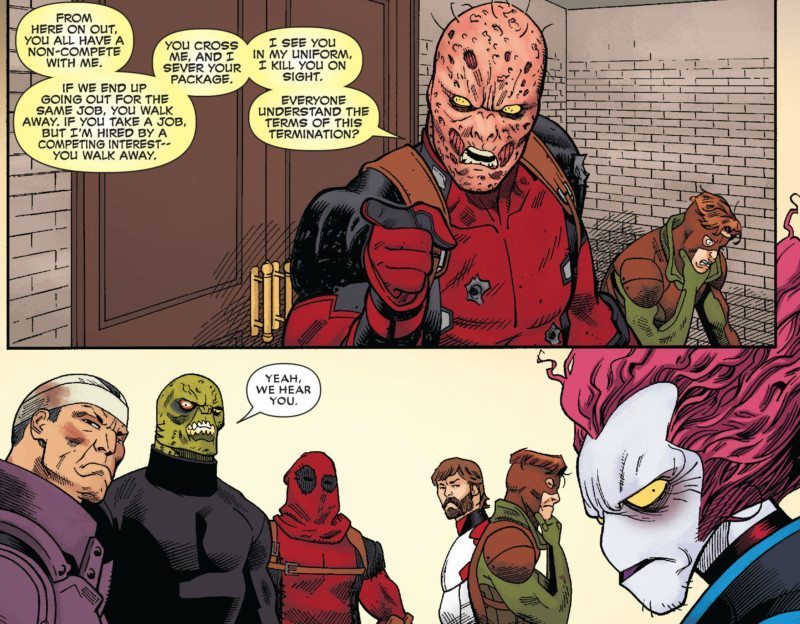 But given this rage—why is he not equally furious when he walks in on his wife in bed with a werewolf? Yeah he shoots it, but we don’t get the same level of anger that would be rightly justified in this situation. He seemed more exhausted than angry. It didn’t make sense. If there’s one character who could re-ignite his anger over and over again, regardless of how crappy his day’s been, it’s Deadpool.

The art in this issue was decent—it told the story well and had some decent action sequences but I can’t really think of any one piece of it that blew me away. I hated the cover because it was so misleading. Once again, this issue has nothing to do with Civil War II, and Madcap isn’t even referred to in the story. The editor’s note had a joke about pretending like the events in the issue were foreseen by Ulysses, but if you’re going to write a joke that lame because of the cover, you might as well not even try. It was almost insulting to me as a reader.

READ: Check out our review of the previous issue!

The tone in this issue of Deadpool was on point, but the content was not quite there yet to match it. It’s a step forward, but the other foot is dragging behind for right now.