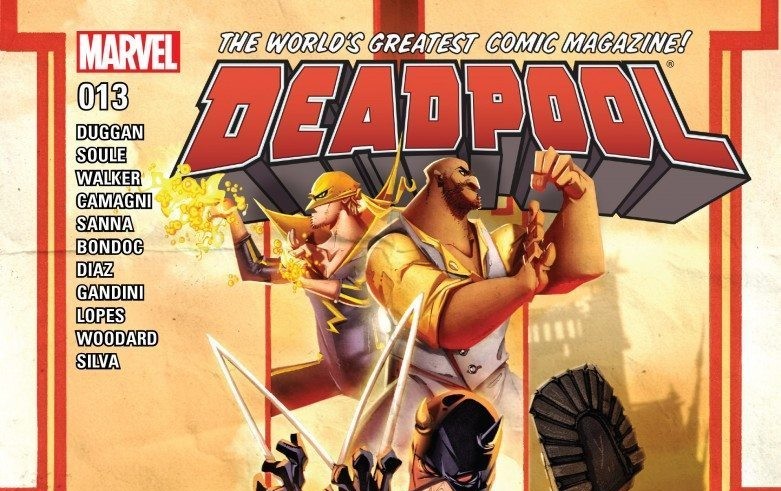 DEADPOOL #13 is actually a four-part series in one, spanning across multiple titles, as DEADPOOL, DAREDEVIL, and POWER MAN AND IRON FIST all help to rope more characters into the action. Obviously this review will focus on the DEADPOOL parts of it: issue 13, which is part one of the arc, and issue 13.1, which is part 4.

READ: Need to get caught up? Check out our review of DEADPOOL #12 here!

What makes this story great is that it plays to Deadpool’s strengths by giving him plenty of characters to bounce off of, which providing ample opportunity to be his most hilarious self. Deadpool is approached by Marvin, an investor for the mob, who is in dire straits. He made bad investments for the mob, and now they’ve enlisted muscled goons and Typhoid Mary to get even with him. The arc follows Deadpool and Marvin as they search for Marvin’s laptop, which contains information that could help him testify against the mob in court and send him to the Witness Protection Program. They seek out help from Matt Murdock, and eventually get his alter ego Daredevil along with Power Man and Iron Fist to join in on the fun. This plot is well-constructed and easy to follow with plenty of opportunities for banter between characters. Even though the arc is divided up into four parts across three titles, packaging them all in one issue keeps it from becoming too confusing.

Issues 13 and 13.1 both excelled in characterization. In issue 13, it is revealed that Deadpool was raped by Typhoid Mary, who had shape shifted herself into Siryn. Deadpool, in love with Siryn, slept with her. Deadpool has been through a lot over the years, but this clearly took the greatest toll. It makes us see him as vulnerable. It also shows that his constant wisecracks and affinity for danger are fronts to distract himself from this betrayal and pain, and offers him a genuine human connection with Marvin by opening up to him. Even though we see Deadpool open up like this, he’s still the same old goof. 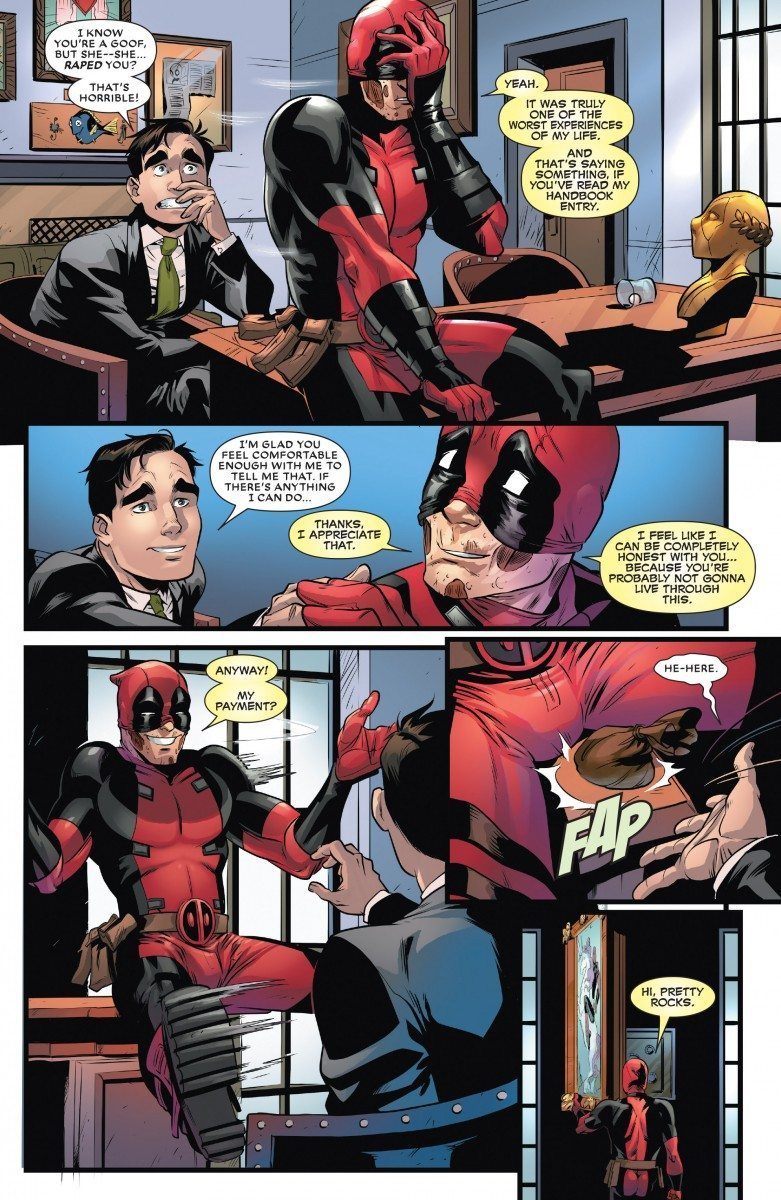 As for the other superheroes in this arc (Daredevil, Power Man, and Iron Fist) it’s really fun watching how ticked off they get by Deadpool’s antics. It seems like they’re always cleaning up after him. The best example of this is when Daredevil has to rescue Marvin from the path of a runaway garbage truck that Deadpool shot the wheels off of. Power Man and Iron Fist are also having a difficult time. They agreed to help Deadpool find Marvin’s laptop, which he dumped in the trash. After spending a day rooting through garbage to try to find it, they’re understandably frustrated. Fortunately, there are plenty of ruthless gangsters in need of punching for them to take their anger out on. 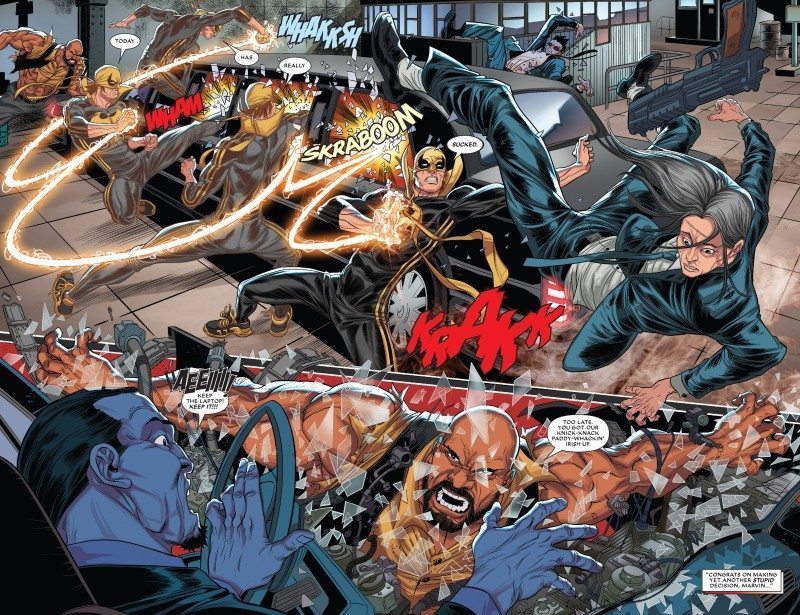 The pacing is great. There’s a nice ebb and flow between comedy and action. Oftentimes the best action scenes were accompanied by the best jokes. The plot’s focus on Marvin, a cowardly person we’ve never seen before, makes this issue very low-stakes for the reader. I didn’t really care that much about Marvin, but I was fine with sitting back to watch these superheroes make jokes and punch bad guys. It’s a simple formula, but it works.

Artistically, both of these issues were great. They were drawn by different artists and each style has its own merits. Jacopo Camagni does a great job of creating facial expressions that help set the humorous tones carried in the rest of the arc. Paco did a great job in issue 13.1 of showing intense movement during a chase scene and in each character’s dynamic combat moves. Camagni uses color to create softer, inviting tones whereas in Diaz’s issue, color is used to provide sharp and crisp definition. They’re very different art styles, which could be jarring when reading this arc issue to issue. I found it refreshing as it gave each part of the arc its own distinct feel. On the other hand, I can understand how this would rub some people the wrong way.

READ: Love POWER MAN AND IRON FIST? Check out our review of their first issue!

These issues are great in their own right, but the real treat is being able to pick up a four-part saga in one package. I definitely encourage anyone who’s looking for a quick, fun story with great character interactions to check it out.