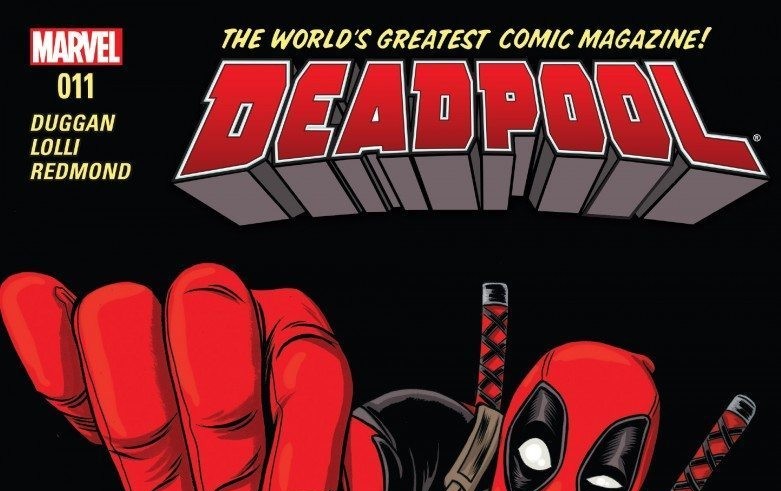 DEADPOOL has been a wild ride so far. In this issue, we get a brief moment of clarity – Deadpool style!

Our favorite Merc with a Mouth has tied up Sabretooth and plans to kill him using a tank full of Terrigen mist as payback for murdering his parents. Only thing is, Sabretooth isn’t the culprit. Deadpool is. Just before he’s about to gas Sabretooth, Scott Adsit speaks through Creed via magic spell. Adsit tells him to stop and that he is responsible for his parents’ deaths. He admits to always having known this and sets off in search of a better future. This issue was a satisfying conclusion to the arc. It gives Deadpool and the reader time to think on past events and grow a little. None of it feels forced or unnecessary; it’s a nice, calm issue that still feels like a DEADPOOL book.

READ: Need to get caught up? Check out our review of DEADPOOL #10!

This issue was a great break from the usual non-stop insanity, wisecracks, and violence of DEADPOOL. That’s not to say that these things aren’t fitting for the series or Deadpool as a character, but having him reflect on his past the way he does shows his rarely-seen mature side. Luckily, he’s still the same jerk. After letting Sabretooth walk free, we see a classic Deadpool move: 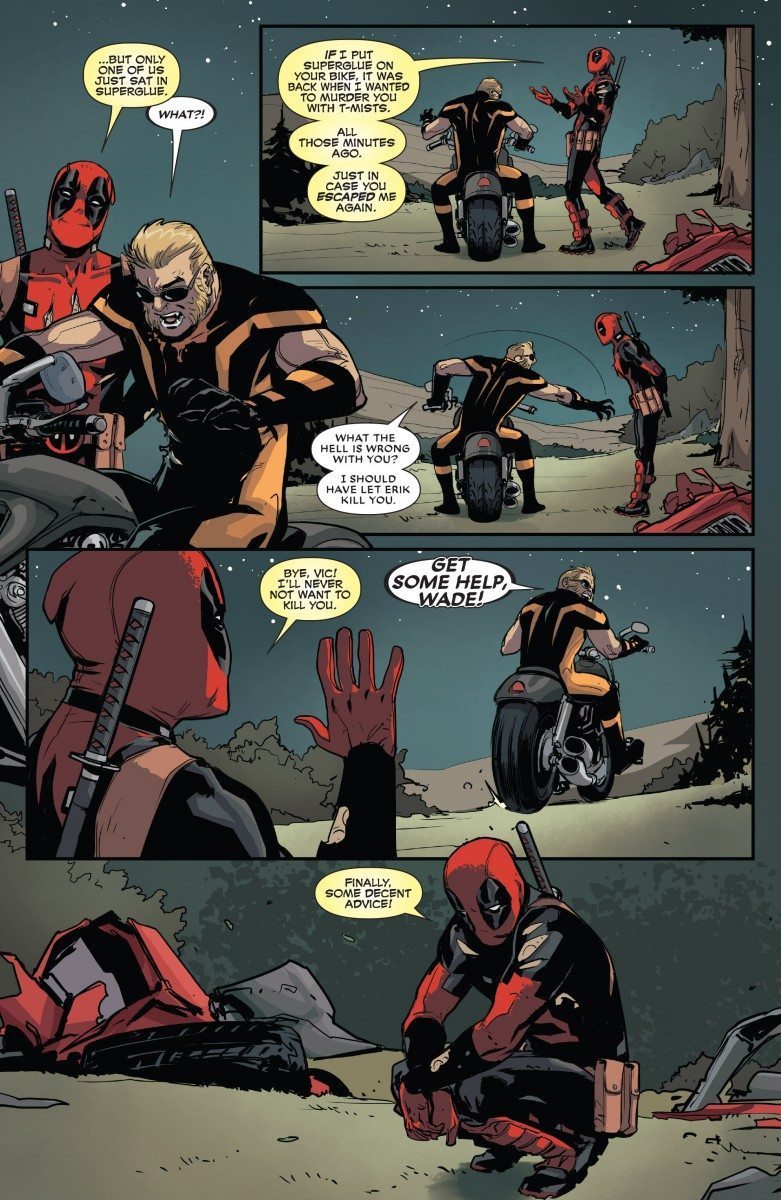 It was comforting to realize that these events did not fundamentally change who he is, i.e. making him into a saint all of a sudden. Even though recent events have caused him to accept the consequences of his past, he’s still the same jackass we’ve come to know and love. A less mature Deadpool would have killed Sabretooth and ignored the burden of responsibility. This shows remarkable character development, which shines through more when he seeks help.

That help comes in the form of Doctor Strange, who reveals that he’s the one who blocked many of Deadpool’s memories. Strange says that this time around, he not only remembers completely but it’s also the first time he hasn’t tried to kill Strange for what he did. This moment is important because it shows progress for Deadpool. He now accepts his problems instead of trying to murder his way out.

The best plot point in this issue was re-introducing Madcap as a voice in Deadpool’s head. We only see him once when he appears right behind him. It’s shocking to see this image after Deadpool has been so at peace for the entire issue. It’s a grim reminder that he still has baggage despite getting better at dealing with it.

Artistically, this issue was very solid. Penciller Matteo Lolli flexes his creative muscles by drawing some dynamic scenes that practically jump off the page. His best work comes in when Magneto rescues Sabretooth from Deadpool’s clutches, using a truck to restrain him. 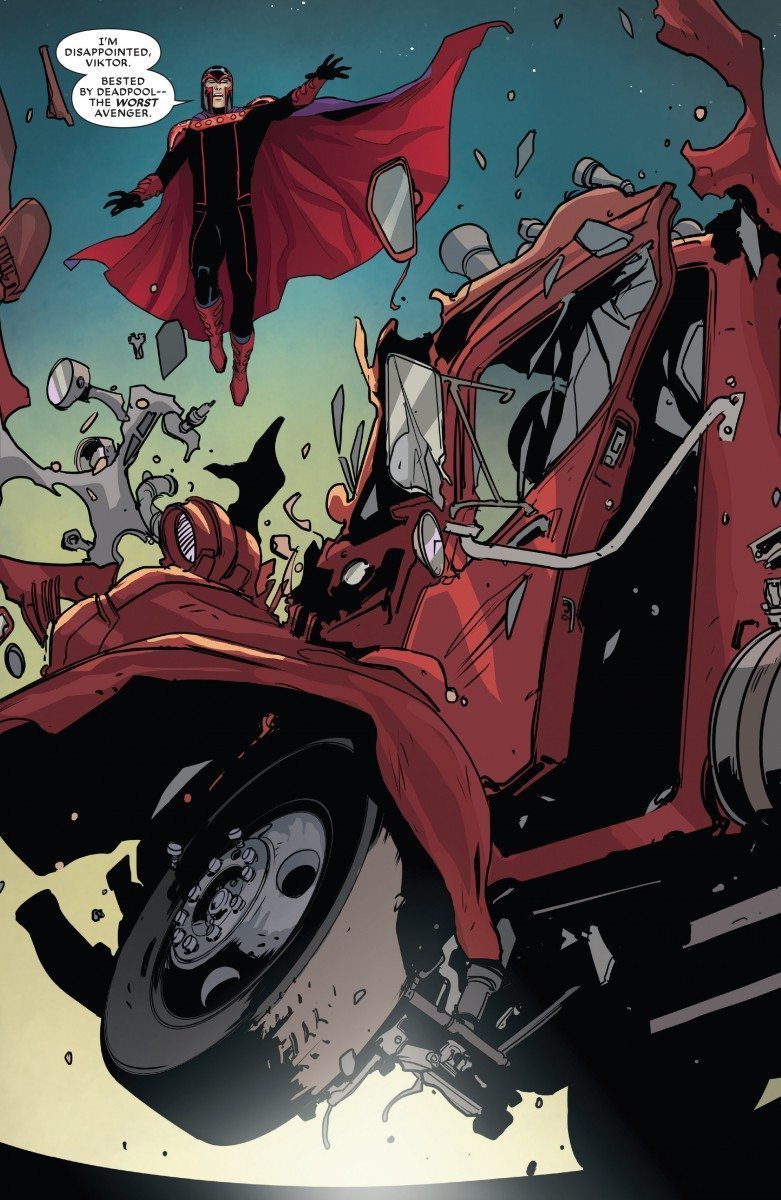 All the moving parts of the truck being disassembled demonstrate the raw power Magneto possesses.

My favorite panel of the issue was the one where Deadpool is being chased by mounties after stealing one of their horses for transportation. 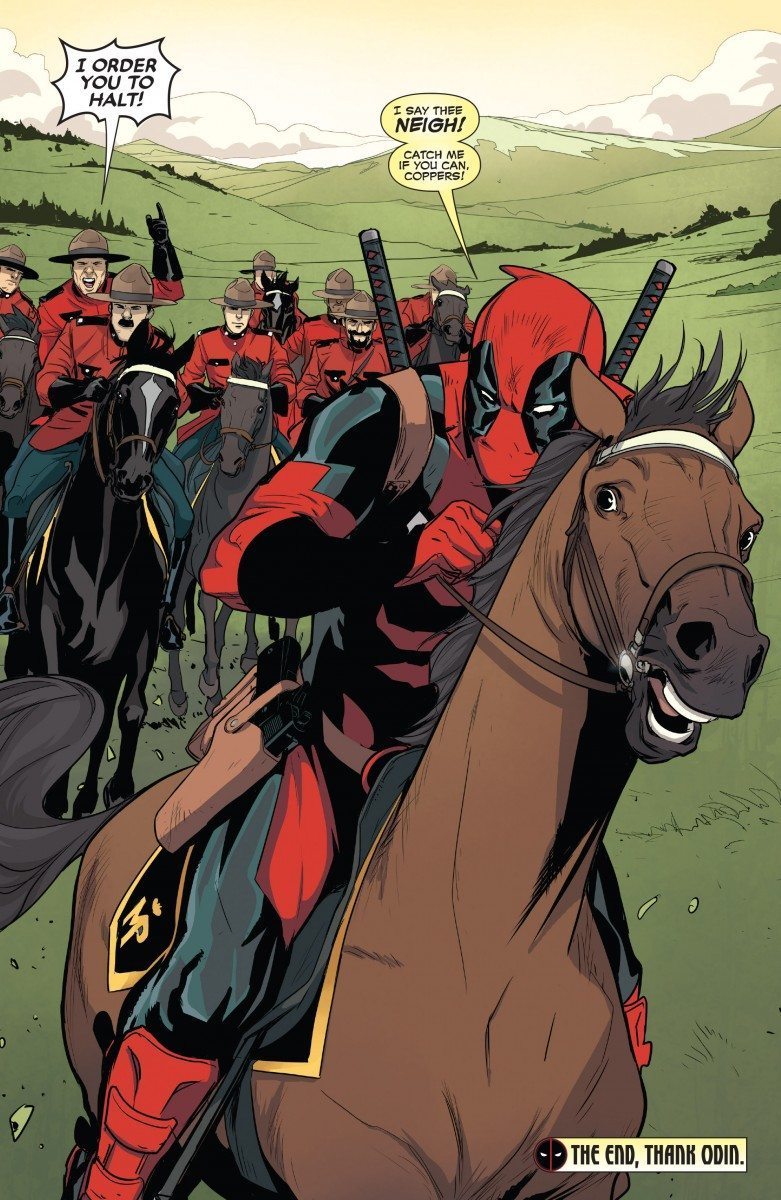 It’s a super funny and dynamic panel. I see it as Deadpool’s version of riding off into the sunset, and I can’t think of a better way to end this issue.

What’s next for the character? We don’t know. But what we do know is that he has grown up, but not enough to where he’s no longer fun.