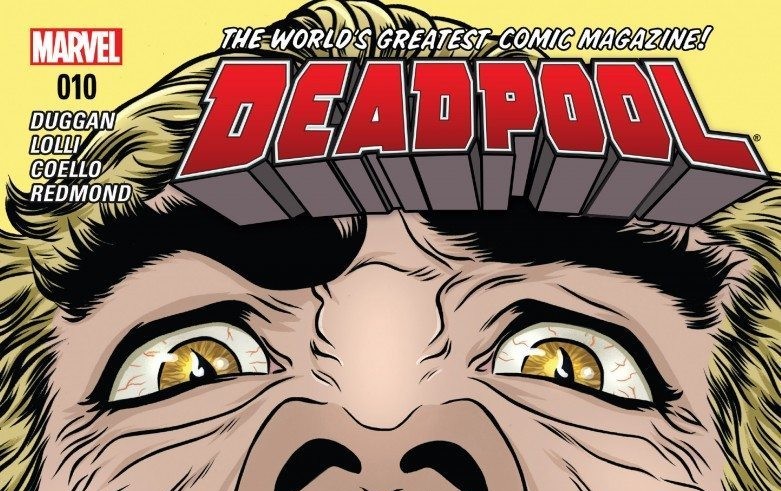 DEADPOOL has gradually improved over the last few issues. Even though this issue seems to interrupt the pacing somewhat, it’s much better artistically than previous entries in the series. The art reminds me of why I read comics, but more on that later. First, let’s see what Deadpool and Sabretooth are up to since taking chunks out of each other in last week’s issue.

In DEADPOOL #10, the titular character and Sabretooth discuss their beef with each other over steaks at a highway diner. Their conversation shows how they’re both quite similar. Sabretooth said he’s disappointed Deadpool failed to kill him, just like Wolverine. All Sabretooth wanted was for Deadpool to give him a warrior’s death and end his misery.

Deadpool can certainly relate to this. In past arcs, he has used his reckless nature as a way to end his suffering and inner torment. Acknowledging this, he immediately steals a motorcycle and chases after Sabretooth.

READ: Need to get caught up? Check out our review of DEADPOOL #9!

I love the interactions between the two characters, as they show how Sabretooth is a much more civilized person than Deadpool in some ways. Sabretooth knows he’s a monster because of all the people he’s killed, and he accepts it. In contrast, Deadpool constantly tries to run away from the monster he’s become and gets into more trouble because of it. The ensuing motorcycle chase showcases these traits in action, as well as some vastly improved art. The art particularly shines through when Deadpool first mounts the motorcycle and chases after Sabretooth.

My favorite thing about chase scenes in comics, and comics in general, is that when things are really fast-paced, you can always slow down and admire the details. This is something you can’t really do in movies and TV, and it’s what I like so much about comics as a medium. In my mind, this chase scene alone redeems the cheesy art we’ve seen in previous issues. There’s so much movement conveyed through stationary images. And of course, we get some classic Deadpool wisecracks throughout the chase. 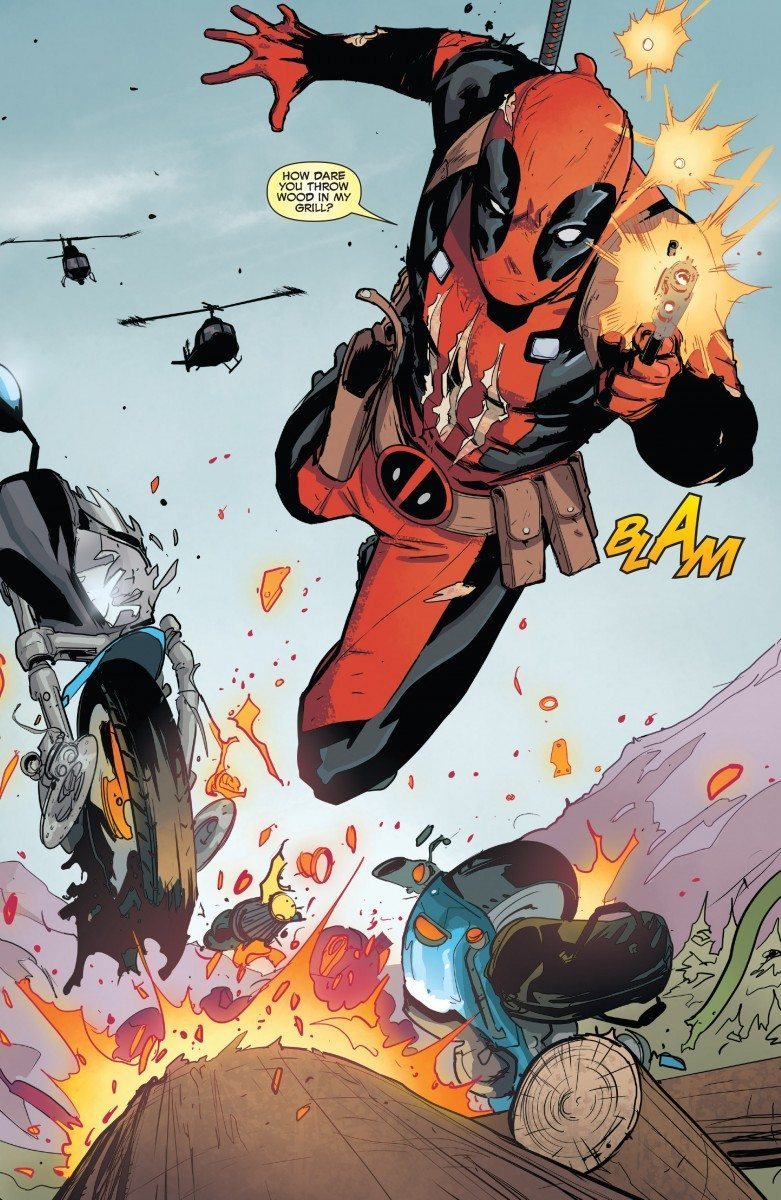 During the chase, two helicopters crash into each other, which really didn’t make sense to me. The two choppers just get too close and crash, making it seem silly and forced. However, in the aftermath of this crash, we get to see the better sides of both Deadpool and Sabretooth — kind of, anyway. 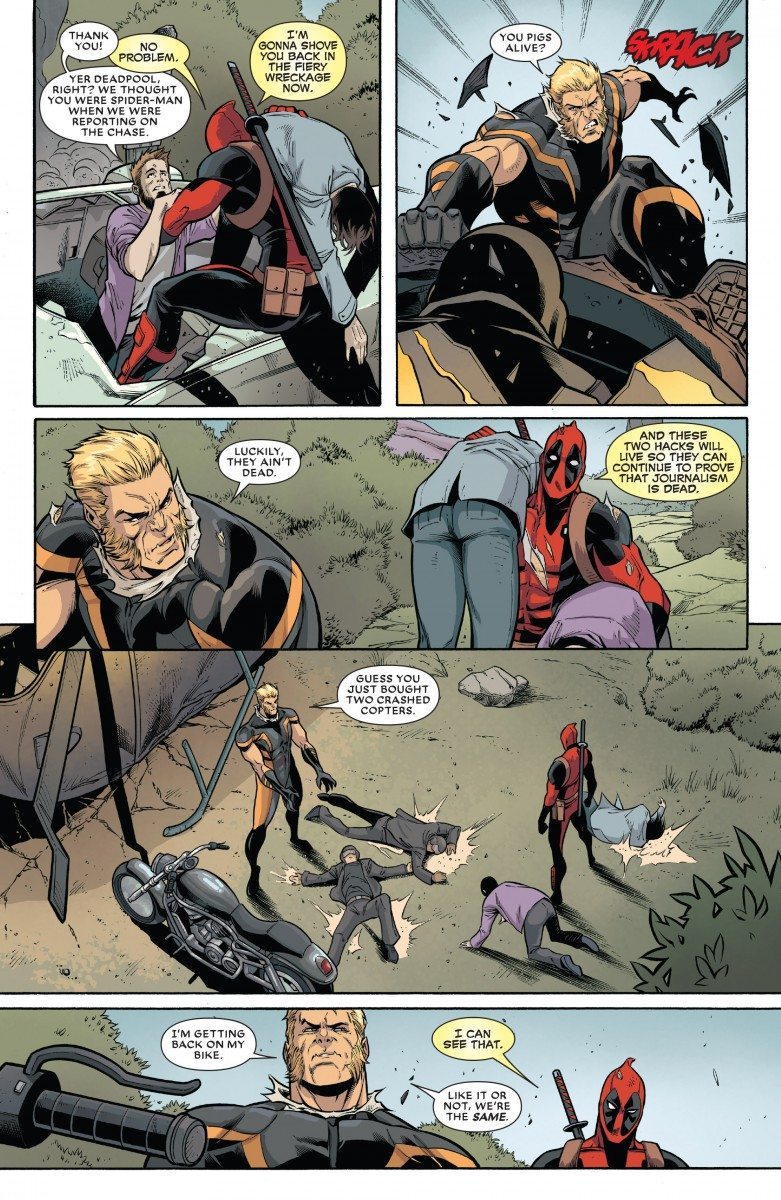 Deadpool and Sabretooth chose to rescue the civilians injured or trapped during their chase, but while performing this duty, Deadpool decides to mock them. Making fun of civilians while helping them is so quintessentially Deadpool. He’s trying to do the right thing, but can’t help poking fun. Overall, this is what made the characterization in this issue so great. Scenes like this allow the reader to see the true Deadpool, as well as how much he relates to Sabretooth. They’ve both killed more people than they can count, and how they deal with that defines them.

READ: Want to get into Deadpool, but don’t know where to start? Check out our Readers’ Guide!

In terms of plot, certain parts of this issue fell short. The opening scene with Deadpool and Sabretooth in the diner really took away from the momentum of last issue. It didn’t make much sense to me for the characters to share a meal. It would have been more appropriate for them to start ripping into each other the second Deadpool walked in. In the same vein, the motorcycle chase seemed forced despite showing off some great art.

Despite these gripes, this issue was a huge step forward artistically and continues to have great character interactions between Sabretooth and Deadpool. They fight and identify with each other like no one else could. This relationship is truly unique, in addition to being unexpected for the characters. Lucky for us, it seems like these two aren’t through yet.