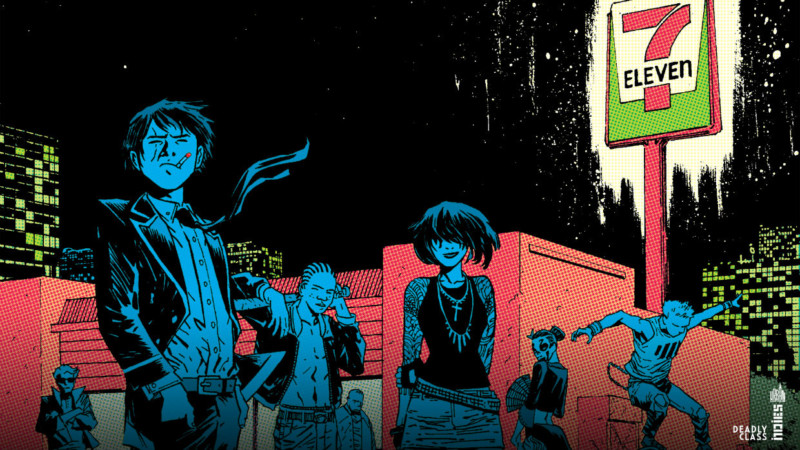 SPOILERS PRESENT IN THIS ANALYSIS

There seems to be a rising trend in modern literature of systemic oppression and teenagers committing heinous acts on the whims of mysterious authority figures. This concept of a higher power forcing unsuspecting individuals into egregious acts is nothing new. Before the dystopian novels of THE HUNGER GAMES and DIVERGENT, there were post-World War II Italian films with similar themes. Due to the huge economic depression that plagued a large part of Europe after WWII, many Italian citizens found themselves living in horrible poverty. As a result, filmmakers wanted to portray the depression and those affected by it as realistically as possible. It’s in this branch of fiction where the story of DEADLY CLASS takes its influence from.

This movement, known as “neorealism”, became a staple of Italian cinema for years. Works like THE BICYCLE THIEF highlighted how situations beyond the protagonists’ control would force otherwise honorable people into dishonorable actions. The protagonist would never willingly engage in criminal acts, yet familial responsibilities would often cause them to become part of a darker system. Today, works like BREAKING BAD discard the melancholy look of the films but keep the concept; how much is someone to blame for their actions? Do the conditions put upon a person drive their behavior or is there something innately twisted within them?

Written by Rick Remender, the first few volumes of DEADLY CLASS focus on the story of Marcus Lopez as he’s taken from a life on the streets and enrolled into a school for assassins. The elite academy, run by the mysterious Master Lin, houses children from all across the world. These kids are the offspring of mob bosses and mass murderers, each expected to follow in the footsteps of those before them.

Being in Control of Your Destiny

Marcus decides to attend the school, and that’s the sole decision he gets to make for himself within the series. His whole life has been a series of unfortunate events that left him jaded about humanity. Marcus living the streets was a result of having both his parents dying in a horrible accident. He was then put him in an orphanage where the head of the house forced the children to perform manual labor. Years of that abuse from the house and his grotesquely perverted roommate eventually drove him to perform a massive act of violence.

Eventually, Marcus gets a job at a comic book shop and attempts to live a normal life. It all falls apart during a drug-filled evening when he sleeps with Saya, an assassin in training and member of a Yakuza family. While one could claim Marcus chose to take the drugs, his decision to do so centered on coercion from his peers. He desired what every human does; to belong. So when he’s faced with the consequences of his actions it feels like he’s getting kicked when he’s already down. Being thrust into the foster system and a life on the streets broke him. Marcus no longer knows how to love or be loved. Fighting to survive for most of his life, Marcus never knew the freedom of being a normal teenager.

The characters might appear to be free, but their actions are closely controlled. The minute they step outside the norms of their situation, they’re horribly punished. When fellow classmate Maria goes against the cartel that raised her, mostly because they’re bad people; everything seems okay at first. She, with the help of Marcus and their friends, manages to dispatch them; it appeared there was a happy ending to cap off the death-defying events. So when Master Lin summons Maria into his office, her defenses are down. This proves to be a big mistake as she drinks poisonous tea.

LISTEN: Want to see more analysis of DEADLY CLASS? Listen to our podcast about it here!

The protagonists often wonder how they came to the situations they find themselves in. This isn’t so for Marcus. He’s hyper-aware that his circumstances connect indisputably to the death of his parents. He constantly grapples with depression and trying to regain some mediocre sense of control in his life, but can’t seem to ever fully grasp onto it. It’s likely that the accidental death of his parents, as well as being the catalyst for the tragedy at his orphanage, showed him the world is a merciless place that he has no real say in.

Saya’s victimization in this system stems from her complete lack of agency. At the end of the 4th volume, the students at the academy are told they have to kill one another in a ritual known as the Freshmen Finals. During this event, she kills Marcus. She does this because of the destiny decided for her by her yakuza roots and by the people in power. She’s a pawn in their game, and she knows it. Yet unlike Marcus and Maria, she didn’t do anything to fight against it. She decided to keep her head down and follow the system.

Even when the promise of freedom was there with her friends, she couldn’t take it. The only hope for her overcoming the expectations of the school and her family is when she whispers something to Marcus as she stabs him. While her words remain unknown, her face expressed deep shock and pain as her friend died by her hand. This may indicate that she’ll be the one to fight against her criminal roots and win.

The Use of Color

While the majority of the Italian neorealism movies predated the common use of colored film, modern neorealist works use the visual format to show how the environment is affecting the characters. In television, BREAKING BAD prominently uses the dry desert aesthetic mixed with an oversaturation of yellows to give the audience members a sense of unease. This feeling paralleled the uncertainty felt by Walter White. He wasn’t sure how to operate in the underground drug market. Despite all the visual cues telling us that he didn’t belong there, the audience understood why he made the choices he did because it felt like the system had abandoned him.

READ: Wonder what happened in the last issue of DEADLY CLASS? Catch up on it here!

Similarly, the neon colors stereotypical of the American 1980s give a bright face to the underlying darkness of the comic. When the kids take a road trip to Las Vegas, they become awash in this lighting. Yet, while they’re there, they encounter a horrible hillbilly gang that has a personal vendetta against Marcus. The teenagers mask their animosity with half-hearted smiles and fake jubilation. The hyper-saturation of colors indicates this, bathing them in fake, sterile neon. No lighting comes across as natural, thus implying to the viewer their feelings are just as flashy and unnatural as the signs. Even the dark blue and purple hues of Marcus’ skin visualize how strange his life is.

The use of color visually shows how the environment is impacting the characters. Marcus’ blue tones convey the melancholy feelings he has due to the loss of his family. The neons and purples give off a sense of uneasiness about the world of DEADLY CLASS, where everything seems bright and cheery. This is a time where a high school should be fun and exciting, yet the bright colors almost mock the dark tones of the story. Wes Craig and Lee Loughridge paint the tale as something it isn’t, something more classically associated with the comic book genre. Yet the darkness in this world remains, despite the attempted brightness of the colors.

The characters of DEADLY CLASS have all had expectations thrust upon them, whether they asked for them or not. Society expected Marcus to live a life as a vagabond before the academy; the world had given up on him. While the school seemed like a better choice, it turned out to be just as cutthroat, albeit more explicitly so. The family that took Maria in kept her as their son’s plaything, while Saya had to fulfill the duties set up her by her family.

Each of their individual circumstances created by those in power or by the corrupt society at large destroyed these kids. If circumstances differed, if their families didn’t lead them to criminal lives; this story wouldn’t exist. They would look like any other teenagers. While it’s too late for Marcus and Maria, Saya still has a chance to take back her freedom. Let’s just hope she decides to act on it.