While DC continues to reshape its cinematic universe with the upcoming release of WONDER WOMAN and the highly anticipated JUSTICE LEAGUE film, they have also found enormous success in re-establishing their comic universe through the release of REBIRTH late this May. With the return of Wally West in its first issue, REBIRTH sets a precedent to revive all of what fans missed and loved about the Pre-Flashpoint era. Having missed the mark in their 2011 reboot, THE NEW 52, DC Comics finally seems to have re-captured the spirit of what made their universe unique: the characters.

READ: Looking for something new to pick up? Check out our favorite comics from Rebirth!

Unlike the widespread disappointment shared by critics after the release of this year’s blockbuster film, BATMAN V SUPERMAN: DAWN OF JUSTICE (a film I personally enjoyed), both the ongoing BATMAN and SUPERMAN comic series’ have been remarkable, receiving mainly positive reviews among fans and comic critics.

READ: Here’s our exciting review of BATMAN BEYOND #1

Outside of the gritty tone portrayed in both Zack Snyder’s MAN OF STEEL and BATMAN V SUPERMAN: DAWN OF JUSTICE–a tone DC made prevalent throughout their NEW 52 run – the current series’ following DC’s most iconic male heroes has dared to re-explore the more sensitive side of both characters.

Having been propelled by darkness, Batman has garnered one of the largest fan-bases of any comic book hero. From Tim Burton’s interpretation in 1989’s BATMAN, to Warner Brother’s BATMAN: THE ANIMATED SERIES (1992-1995), and finally to Christopher Nolan’s DARK KNIGHT Trilogy, the world’s greatest detective has thrived off of the grim and gloomy. Even in the comics, it has usually been the darkest of stories, such as Alan Moore’s THE KILLING JOKE and Frank Miller’s THE DARK KNIGHT, that have been his most definitive stories. 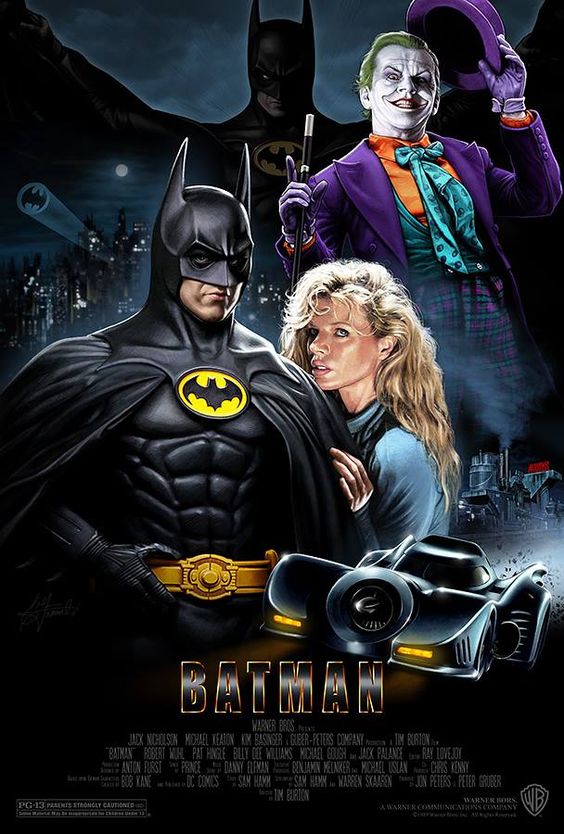 However, in the wake of the recent REBIRTH relaunch, Batman’s character, though still as stern, stubborn, and overly protective as always, has displayed levels of himself that make him more personable to readers. As much as I love the ominous and mysteriously brooding Bat, it’s ultimately the “man” part that makes him the hero we all admire and secretly aspire to be. I’ve heard people say that the most intriguing aspect about Batman is that Bruce Wayne is the mask, and Batman is the true persona. To some extent, I can agree with how deep he has fallen within the role of the cowl. However, Bruce Wayne will always be his anchored self.

It was Bruce Wayne, who took in three lost teens, Dick, Jason, and Tim (and Terry McGinnis if we’re pushing it), and molded them into Robins. It was Bruce Wayne who developed a father/son relationship with Alfred, and more importantly, who has kept Batman from never crossing that shaky murder line (except for Ben Affleck’s Batman). The rogues of Gotham are also some of the most disturbed, dangerous, and insane villains in the DC universe, proving to be formidable foes against even the super-powered Superman. Being constantly at odds with such a batch of twisted criminals, Batman  has always managed to prevent himself from dealing that final blow. That has always been because of who he is as a man.

READ: Are you a NIGHTWING fan? Here’s our review of NIGHTWING #5

In Tom King’s current BATMAN REBIRTH series, readers get to see more of the man behind the Bat. Through keen character development, integrated inside story plot with skillful dialogue and narration, King has reconnected fans with a more sincere and empathetic Batman. Beginning in BATMAN #1, Batman has a touching moment with Alfred as he guides a Gotham plane to a safe landing. Awaiting almost certain death, he asks the long-time butler if his parents would have been proud. It is one of the purest exchanges I have ever seen between the two, and displays a rare reflection of himself as a son. Even in the latest “Monster Men” story arc, where everyone is separated and carrying out specific missions, Batman continually expresses concern for the safety of the members in his Bat family – exposing the genuine care he holds as a guardian figure. 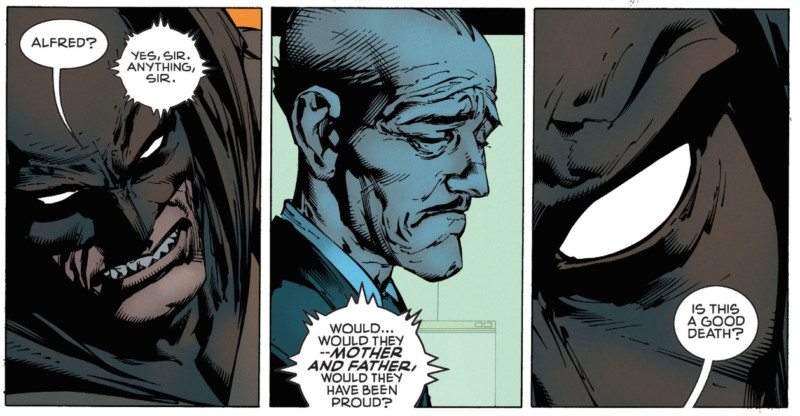 Yet, perhaps the most tender moment of the entire series came near the end of BATMAN #6, where Batman desperately reaches out to a delusional Gotham Girl. In this moment, King not only pulls off the mask, but truly reveals the spirit of the character. Possibly one of his most vulnerable scenes, Batman uncovers himself from behind the cowl, consoles the crying Gotham Girl, and wholeheartedly shares with her the murder of his parents. 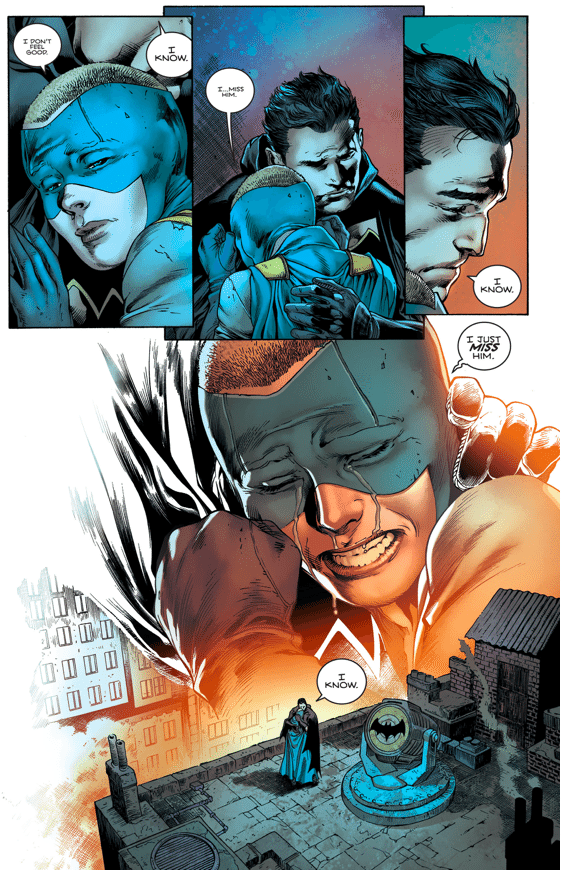 In contrast to the darkness, Superman is undoubtedly Batman’s counterpart–being a hero who exudes hope, trust, and optimism. While Batman thrives off of stealth and fear, Superman shines from his openness to the world. He stands in the light as a symbol of fairness and equality. Heck, the guy literally feeds off of the sun.

However, many of these qualities have acted more like Kryptonite throughout the decades. The classic do-gooder personality that worked for the great Christopher Reeves has failed to carry over to today’s current generation. A prime example of this is the commercial failure of Bryan Singer’s SUPERMAN RETURNS; Singer attempted to reignite the magic from the original SUPERMAN films, but was ultimately left with negative reviews from fans. Even in recent years, through Henry Cavill’s darker portrayal of the Kryptonian and the character’s edgier tone in the NEW 52 re-boot, DC has still struggled to make the character appeal to today’s generation.

READ: Some of our successful symbols of the big man in blue.

Through the launch of DC Comics’ REBIRTH, and perhaps one of the most shocking decisions in comics (though probably a relief to many avid readers), the attempt of re-introducing Pre-Flashpoint Superman required the death of his NEW 52 counterpart. In a move that initially set confusion for two Supermen to live under one Earth, the risk has certainly proved to be worth the reward.

In Peter Tomasi’s recent SUPERMAN REBIRTH series, he proves that the vintage, boy scout image of Superman should not only stand prominent within the character’s core, but also that with well-crafted story and writing, it can make for a new compelling take on the world’s favorite Kryptonian from Kansas. Tomasi has not only used Bryan Singer’s concept of Superman as a father to help develop the character, but he has brilliantly re-established many key elements of Superman’s personality as well.

During his battle with the Eradicator in SUPERMAN #6, Superman, in an awesome scene where he calls Krypto out from the Eradicator’s chest, has a crucial exchange with the Kryptonian, life-absorbing villain, in which he establishes Earth as his true home. This story arc not only defined Superman’s acknowledgment of Earth as his home-world, but it opened up his new position as a father of a half alien, half human son–a prevalent theme of the series. 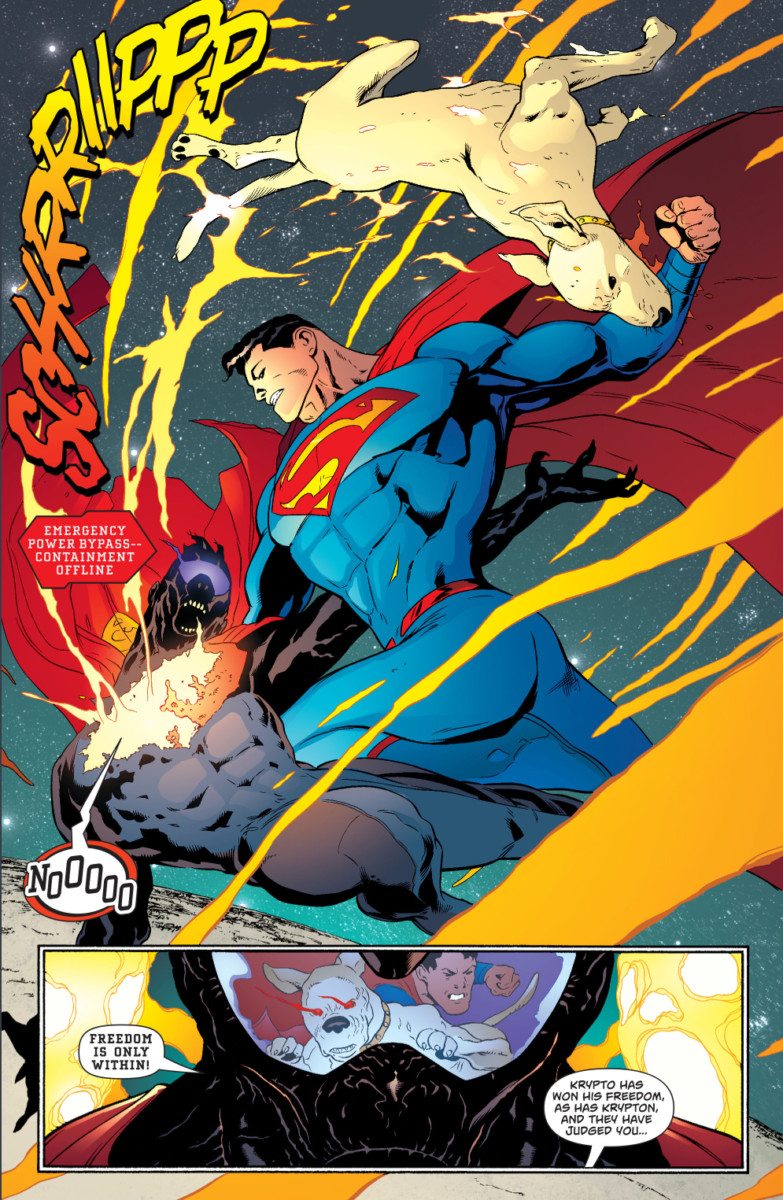 In fact, much like Batman, most of Superman’s richest moments as a character come from the issues that predominantly focus on the Kent family as a whole. Clark’s relationship with Jon and Lois is one profoundly felt within the pages, and usually, it’s the most subtle instances that are the most memorable. There is the most wonderful moment in SUPERMAN #7, where Clark secretly apprehends some low-level criminals at a fair, after promising Lois he would not be Superman for a day. The humor and interaction that occurs between them on their way up the roller coaster on that last page is simply amazing. DC has not only managed to bring out the qualities that make Superman one of the most beloved heroes of all time, but has also established a genuineness to his character that has not been displayed in other interpretations of the character for quite some time. 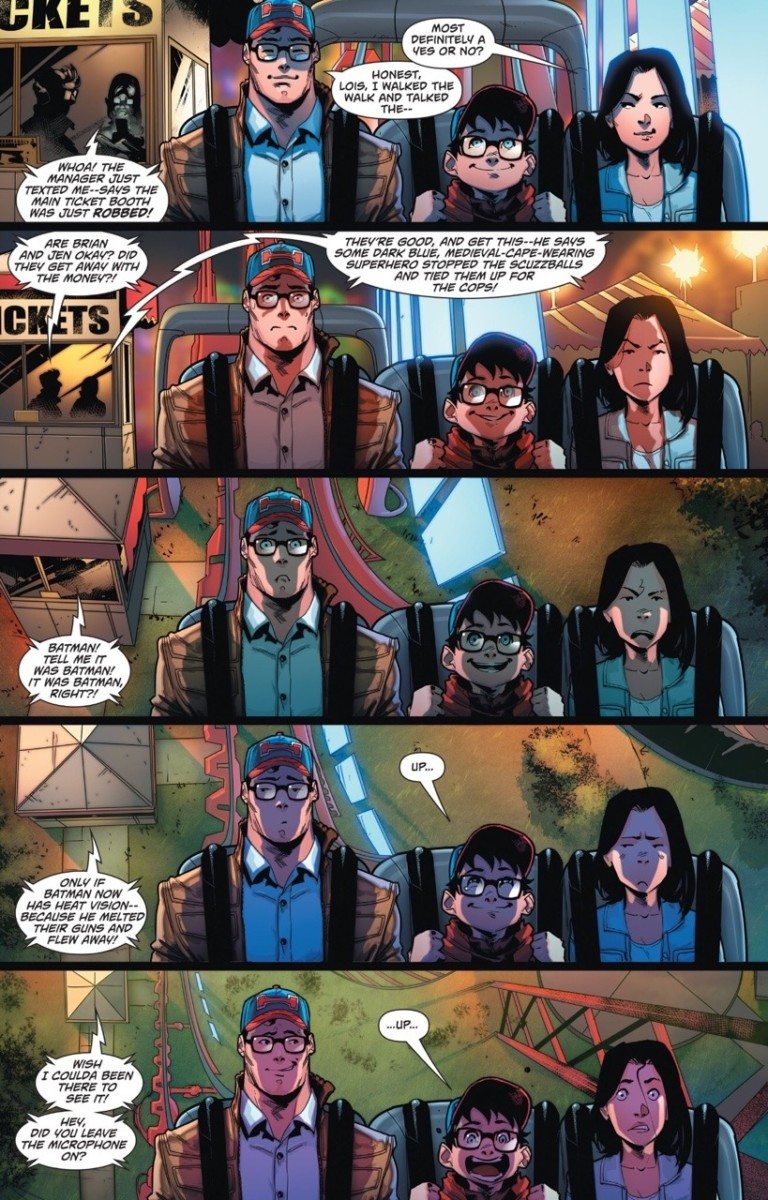 With Batman and Superman both finding success with fans through REBIRTH, what other DC heroes do you believe have significantly improved since the relaunch? Leave a comment below. We’d love to hear your thoughts!

READ: Want to catch up on Rebirth? Here’s our review on TRINITY #1