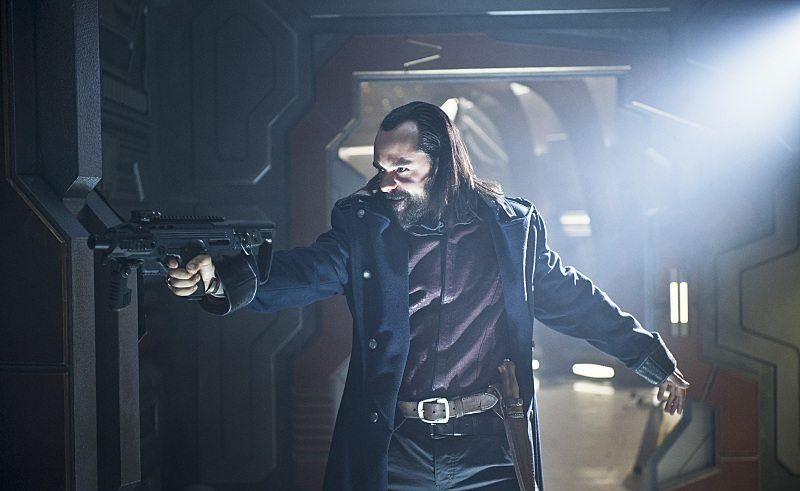 In the latest episode of DC’s LEGENDS OF TOMORROW, “River of Time,” Vandal Savage (Casper Crump) breaks free from his prison above the Waverider. After being recaptured by Hawkgirl, he is brought before the Time Counsel to account for his crimes. Not only is it revealed that Savage has been using time travel to build his empire, but the Time Masters have also been colluding with him, aiding his quest for conquest. His victory seems assured.

READ: We discuss the FLASH and ARROW crossover that introduces Vandal Savage here!

With things looking bleak for our heroes, now’s the perfect time to shine a spotlight on the villain that brought them all together. Vandal Savage was first introduced to the Arrowverse in the FLASH/ARROW TV crossover episodes, “Legends of Today” and “Legends of Yesterday,” where he seeks to take the lives of Kendra Saunders (Hawkgirl) and Carter Hall (Hawkman). The three characters are part of a curse that began over 4,000 years ago in ancient Egypt when Savage murdered the lovers during a meteor shower. This led to Kendra and Hall continuously reincarnating throughout history while Savage hunts them down, using their deaths to prolong his own life. While Savage was defeated at the end of the crossover, he returned in DC’s LEGENDS OF TOMORROW having taken over the world by 2166. Rip Hunter gathers a group of heroes (and villains) to take down the tyrant following the murder of Rip’s family by Savage’s own hand. During the course of battle against Savage, the heroes discover that he can only be truly killed by Kendra. 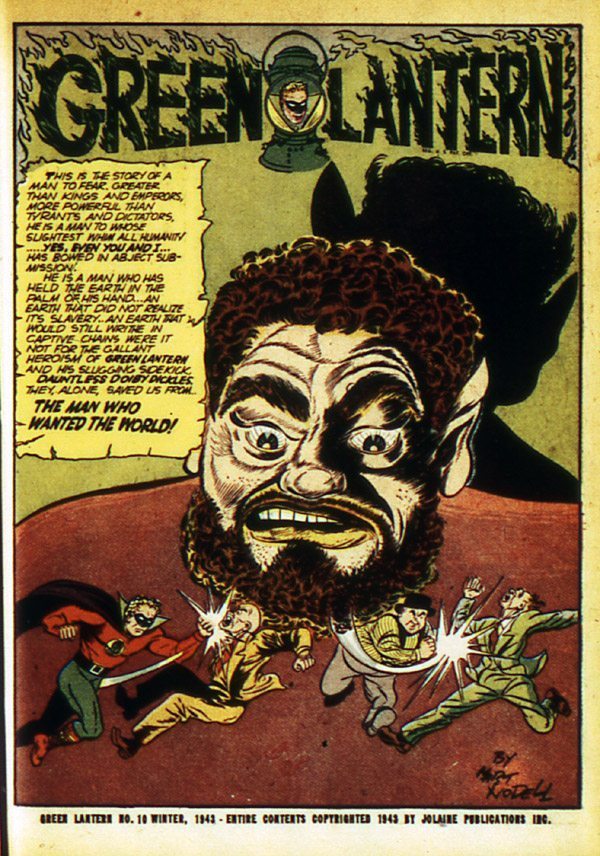 While Savage in the Arrowverse was originally an Egyptian priest by the name of Hath-Set, his comics inspiration is over 50,000 years old, a chieftain whose name was Vandar Adg, leader of a Cro-Magnon tribe. Created by Alfred Bester and Martin Nodell, his first comic appearance was in GREEN LANTERN #10 (1943). Savage began his journey through history after he was granted immortality by a mysterious meteorite. During this time, he claimed to have been a variety of powerful historical figures, such as the Egyptian ruler Cheops, Julius Caesar, Ghenghis Khan, and Jack the Ripper, as well as aiding William the Conqueror, Napoleon and Adolf Hitler. Unlike the TV version, he could be killed by conventional means, leading to him trying to take power from the shadows. Following his first defeat at the hands of Alan Scott (the original Green Lantern), Savage became one of the main adversaries of the Justice Society of America, helping form the Injustice Society of the World in ALL-STAR COMICS #37 (1947).

It was during the Silver Age of comics (1950 to around 1970) that a new enemy was introduced to battle Savage. Dubbed the Immortal Man, he first appeared in STRANGE ADVENTURES #177 (1965). Originally known as Klarn, he was a leader of the Bear tribe and an enemy of Savage’s clan. He gained powers from the same meteorite that gave Savage his immortality, and these powers meant that every time the Immortal Man died, he was immediately reborn, albeit as someone else. Through their long lifetimes, these timeless enemies clashed again and again, their battles finally ending when the Immortal Man gave his existence to save the world during CRISIS ON INFINITE EARTHS (1985–1986). 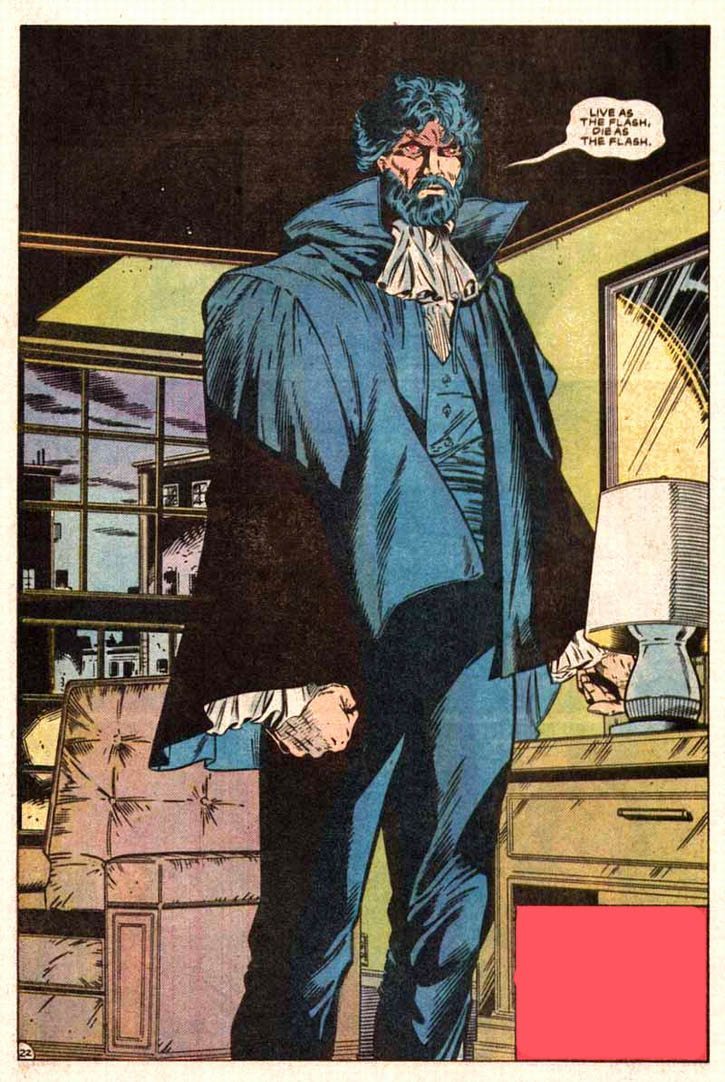 While Savage’s life began on Earth-2, a major change was coming to DC Comics. Following CRISIS ON INFINITE EARTHS, the DC Multiverse was destroyed, leading to the formation of one single universe. Earth-2 was no more, and Savage found himself on New Earth. While the new Post-Crisis universe kept most of Savage’s origins, he now found he had more enemies to deal with (including the Justice League). He is re-introduced in THE FLASH #1 (1987) as he takes on Wally West as the Scarlet Speedster. During the limited series TIME MASTERS (1990), he conspires with a group called the Illuminati to destroy Rip Hunter, who is proving to be dangerous to his timeline. When his plans fail, he clashes against the Flash once more in THE FLASH #50 (1991).

During the series VILLAINS UNITED (2005), he protects his daughter, Scandal Savage, as she eludes Lex Luthor’s Secret Society, which is desperate to recruit her (or kill her in the process). However, in SECRET SIX (2006), Savage reveals he needs his daughter alive to bear him an heir, which Scandal violently refuses. In FINAL CRISIS (2008), while Darkseid takes control of the world’s population, Savage is attacked by the Order of the Stone (followers of the Biblical Cain). He is stabbed by their weapon, the Spear of Destiny and becomes the living embodiment of Cain. However, following a clash with the Spectre, the Mark of Cain is forced upon Savage, cursing him to walk the earth forever, reviled by humanity. 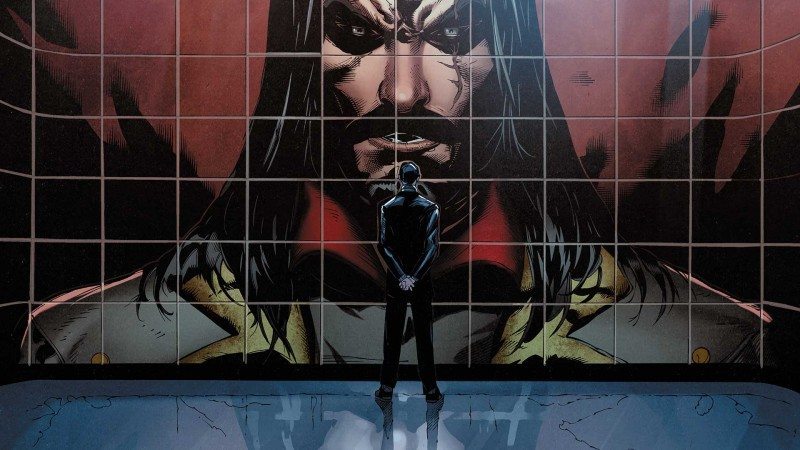 In 2011, DC introduced a line-wide reboot called the New 52. While Savage is immortal in the New 52, the new continuity does not explore his origin. He appeared in the short-lived DEMON KNIGHTS series set in Medieval times. This version of Savage sees him fighting alongside many of DC’s more magical characters (such as the Demon Etrigan) on the side of good. It was a far cry from the pre-New 52 immortal, enjoying life while fighting, drinking, and being one hell of a ladies man. However, in 2012, DC UNIVERSE PRESENTS ran a three-part story named “Savage,” in which he is a serial killer, incarcerated for conducting human sacrifices to remain immortal. In the storyline “Savage Dawn,” printed in the Superman comics, the son of Krypton faces the immortal tyrant for the fate of the Justice League. In SUPERMAN #50, Kal El is offered a choice to rule by Savage’s side, but rejects the offer, defeating Savage in the process.

DC’s LEGENDS OF TOMORROW has managed to take the best of Savage’s comics past and give his TV version a rich history, which has been teased with each episode. His cold, calculating confidence carries him through each of his nefarious schemes and, based on the latest episode, could set his sights on more than just world domination. Crump’s character feels lifted straight out of the comic books and if that’s the case, even if he is defeated, it will only be a matter of time before we see him rise again.