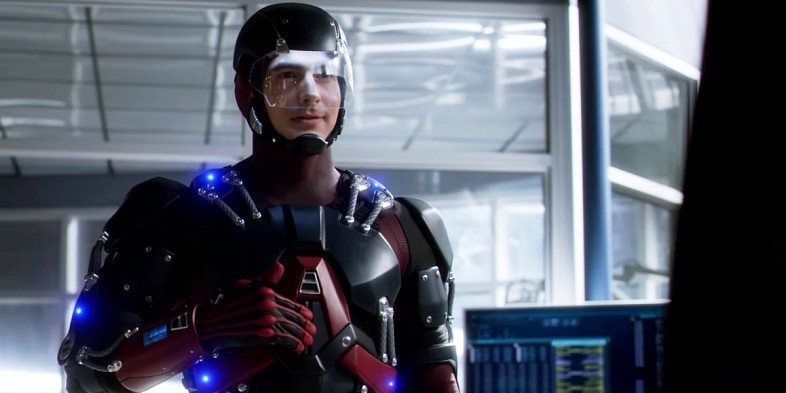 Brought enthusiastically to life by Brandon Routh, Ray Palmer aka The Atom was a hero long before becoming a Legend. He first appeared in the Arrowverse in the opening episode of ARROW Season 3 when he bought Queen Consolidated (Oliver’s family company) and since then has been acting as a force for good in the city. Branded by personal tragedy when he lost his fiancée, Anna Loring, to Slade Wilson’s attack on Starling city in ARROW Season 2, Ray became focused on constructing an exo-suit so he could never be helpless again. He became romantically involved with Felicity Smoak who helped him finish his suit. He became the Atom and teamed up with the Arrow to fight Ra’s Al Ghul. When Ra’s was defeated, Ray concentrated on improving his suit and tried to miniaturize it. In the season finale of ARROW Season 3, this experimentation led to an explosion where Ray is believed to be dead.

In the next season we learn he survived, having discovered the process of shrinking . But he was captured by Damian Darhk and held hostage until he gave up the secret to miniaturization. The Arrow team free him. In DC’s LEGENDS OF TOMORROW, Rip Hunter approaches him asking for help in defeating the immortal tyrant Vandal Savage. Ray leaps at the chance and builds a friendship with Kendra Saunders (Hawkgirl) which blooms into a romance. In the latest episode of LEGENDS, Ray nearly lost his life when a time travelling assassin named the Pilgrim tried to kill him in the past to erase him from time. He survived the ordeal. In the emotionally charged aftermath he became engaged to Kendra.

READ: Hawkgirl has quite the backstory too. Check out her Character Spotlight here! 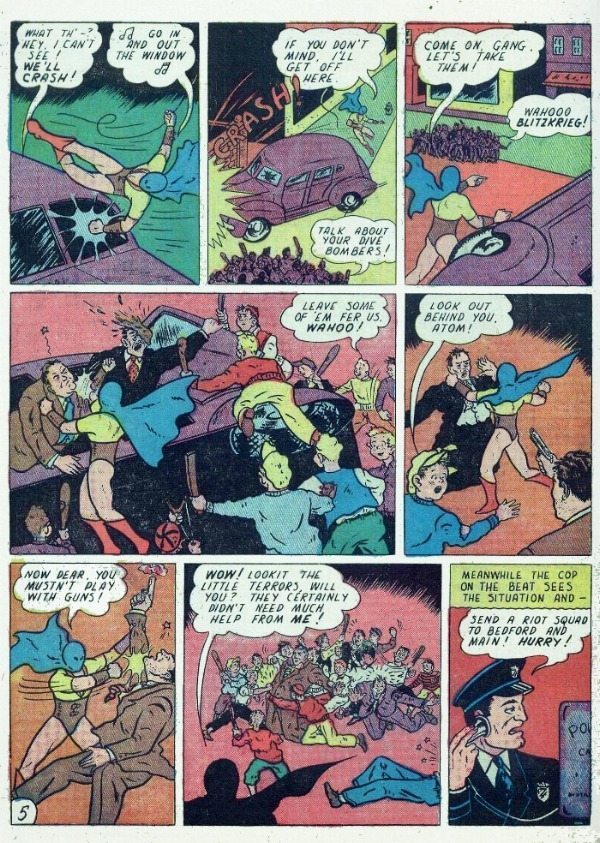 Created by Bill Flinton and Bill O’Conner, the Atom first appeared in the DC Comics Universe in ALL-AMERICAN COMICS #19 (1940). His name was Al Pratt and his only super power was the drive to do good. Trained to be a boxer, he became the Atom, a costumed hero who helped found the Justice Society of America. In 1948, he discovered he had acquired “atomic” strength due to being exposed to radiation during a battle with the villain Cyclotron.

In October 1961, the Atom was relaunched as a brand new character with superhuman powers. This was the beginning of the Silver Age of comics where old comics characters were given new leases on life. While Pratt’s adventures were set on DC’s Earth Two, this new Atom, Ray Palmer, battled villains on Earth One. Created by Julius Schwartz, Gardner Fox and Gil Kane, the Atom’s first appearance was in SHOWCASE #34 (1961). In this issue, Ray Palmer, a scientist, creates a shrinking device out of dwarf star fragments. However, everything he shrinks explodes after an hour. Following an avalanche which traps him and his fiancée, Jean Loring (portrayed by Teryl Rothery in ARROW, she is a friend of Moira Queen. She has had no interaction with Ray so far), he risks his life using the shrinking device on himself to save them. Afterwards, he discovers that the explosive side effects of the shrinking device don’t affect him. Subsequently, he dons a suit and becomes the Atom to use his shrinking powers to fight crime.

READ: Are you a fan of THE FLASH? Check out our character spotlight on Zoom! 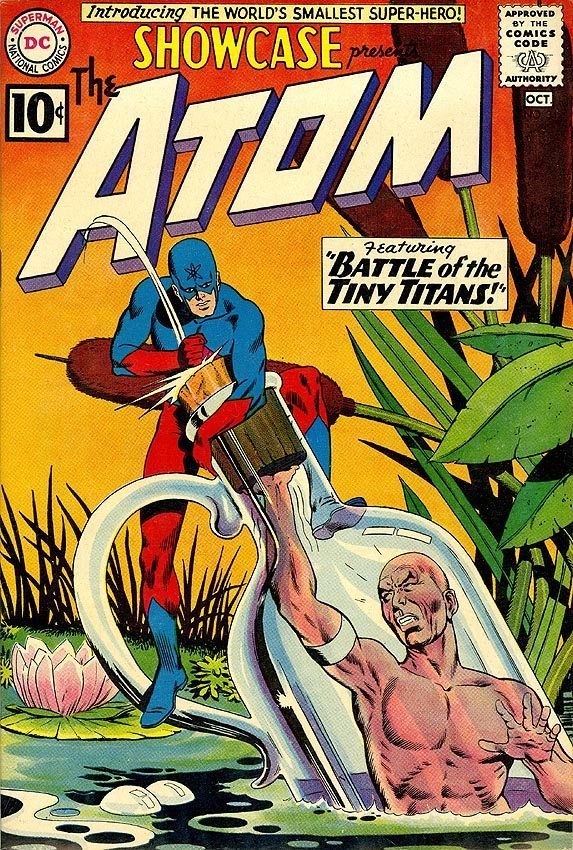 Ray battled many villains throughout his size altering career, including Chronos the Time Bandit (a villain also used in DC’s LEGENDS OF TOMORROW) and the Bug Eyed Bandit ( who has faced off against both the Flash and Green Arrow in their respective TV shows). But one of his biggest challenges was when he found out his wife, Jean, was having an affair in SWORD OF THE ATOM #1 (1983). Leaving his life behind, he ended up in a rainforest in Brazil, befriending a miniature race of aliens called the Morlaidhans. Divorcing Jean, he devoted his life to the Morlaidhans, but that too ended in tragedy. He joined the Suicide Squad to hunt down the rogue agents who were involved in the death of the aliens. Once they were brought to justice, he joined the Justice League.

During the DC comics wideline event ZERO HOUR, where a distraught Hal Jordan changed the continuity of the DC Universe, Ray was de-aged to a 17 year old. However, he still maintained his previous life’s memories. In a bid to fit in, he joined the Teen Titans. These stories took place in the series, TEEN TITANS which ran for 24 issues. It ended in 1998 with Ray reverting to his original age. Shortly afterwards, in the series IDENTITY CRISIS (2004), Ray reunites with his ex-wife Jean after the murder of Elongated Man’s wife, Sue Dibny. This took a turn for the worse, when it was revealed that Jean killed Sue in a desperate attempt at getting back with Ray (the logic being that if a hero’s family is in danger, the other heroes within the Justice League would go running to their families to protect them, which is what Ray did for Jean). Deemed insane Jean was sent to Arkham Asylum. During the BLACKEST NIGHT (2009 to 2010) crossover event, Ray hears that Jean has died. During this series, Black Lanterns, undead beings carrying a power ring attempt to eliminate life from the universe. Jean becomes a Black Lantern and Ray is forced to destroy her by the end of the series. 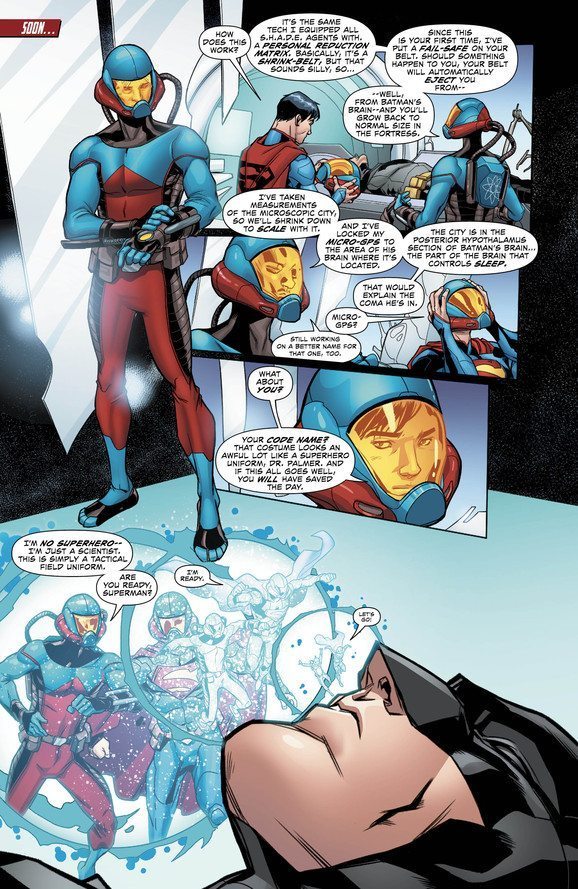 In the New 52, Ray Palmer is a science liaison with the military organisation S.H.A.D.E. (Super Human Advanced Defense Executive) in the series FRANKENSTEIN, AGENT OF S.H.A.D.E. which ran for 16 issues (ending in 2013). He has forgone his super hero alter ego in favor of a scientific adviser. Ray has appeared in other issues since then, one of prominence being BATMAN/SUPERMAN #10 (2014) where he helps Superman save Batman’s’ life.

READ: We look at what DC’s goal is with their upcoming Rebirth relaunch!

Having rescued Batman from the brink of death, Superman comments on Rays heroic actions, hinting that maybe he could well become the Atom again.While there is no sign of him in the upcoming REBIRTH series by DC, I have no doubt we will see Ray Palmer play a pivotal role in the DC Universe. While we wait for that to happen, we’re fortunate that the Atom does live on in our television screens, traveling through time and punching bad guys. Hopefully, he and Kendra can have a positive relationship compared to his comics counterpart but I won’t be holding my breath.