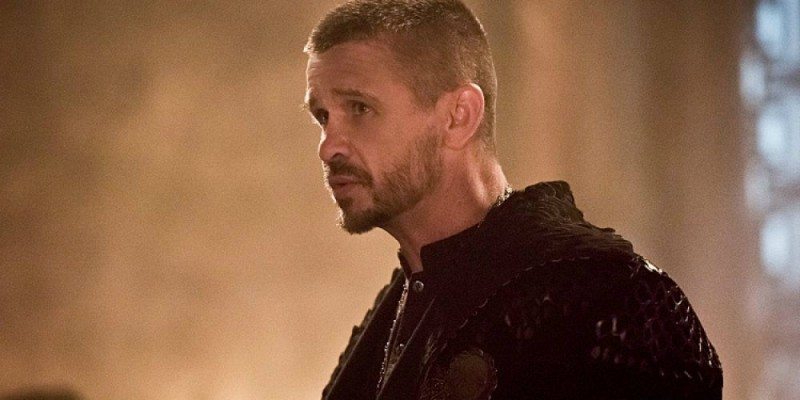 Ra’s Al Ghul (Matt Nable) made his first appearance in the ARROW Season 3 episode “The Magician”. He is an immortal, thanks to the restorative powers of a pool called the Lazarus pit and leader of the League of Assassins. His real name is unknown; Ra’s Al Ghul is the title that was bestowed upon him by his predecessor. Sara Lance (the White Canary) was a member of the league, so when she was murdered, Ra’s wanted her killer brought to justice. The murderer was revealed to be Thea Queen (under the control of Malcolm Merlyn). This lead to a battle to the death with Oliver Queen, the Green Arrow. Surviving death, Ra’s approaches Oliver and asks him to take up the mantle of Ra’s Al Ghul and lead the Assassins guild. At first, Oliver seemed to embrace this offer, but it ended up being a ruse, leading to Ra’s death. But, like any good villain, death doesn’t mean they’re gone forever.

READ: Find out more about the White Canary in her character spotlight here!

In DC’s LEGENDS OF TOMORROW S1E9, “Left Behind,” the White Canary, the Atom, and Hawkgirl are seemingly left behind in 1958 by Rip Hunter. While Ray and Kendra somewhat embrace their new life, Sara is restless and seeks out the League. There she is cured of her bloodlust by Ra’s Al Ghul and becomes a member. When the rest of the Legends arrive to rescue her, Ra’s demands their death for the intrusion. 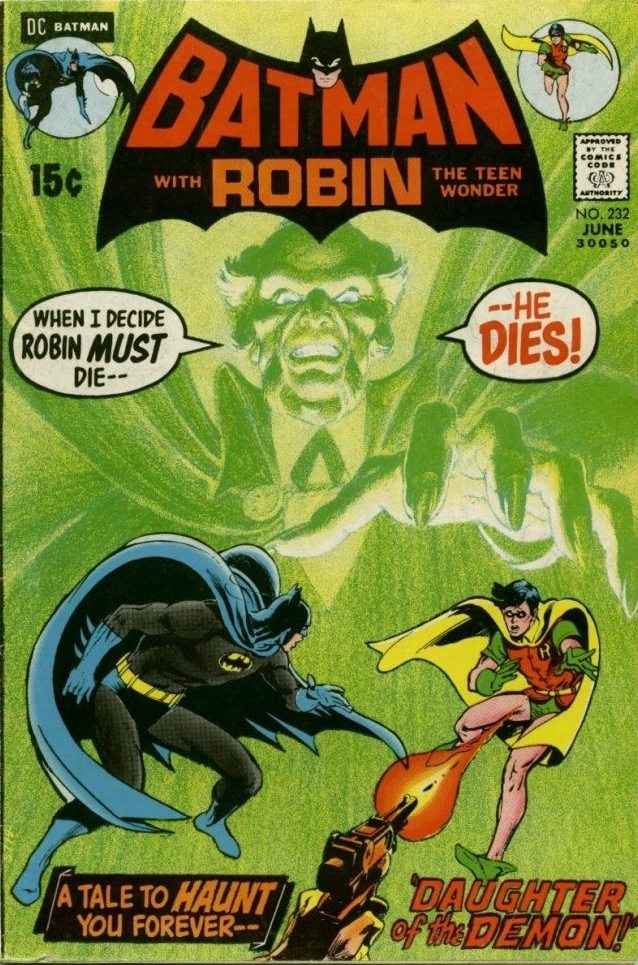 While Nable’s interpretation of the character is pretty spot on, DC’s TV universe have taken some liberties with his story, chief among them being that Ra’s is a well-known Batman villain pursuing Bruce instead of Oliver to take over his organization. Created by Dennis O’Neil and Neal Adams, Ra’s Al Ghul’s first appearance in comics was in Batman #232 in June 1971. He’s first seen waiting for Batman in the Batcave. He had already deduced Bruce Wayne’s alter ego and went to Batman looking for help in locating his daughter Talia (whose first appearance in the DC TV Universe was in this very episode of DC’s LEGENDS OF TOMORROW). It appeared that Robin and Talia had both been kidnapped by the same person. However, after many trials, it turned out that Ra’s was behind Robin’s disappearance all along. Ra’s was using this as a test to see if Batman could be his heir, lead his group the Brotherhood of the Demon and marry Talia. Turning down Ra’s offer, Batman has been crossing swords with Ra’s ever since.

READ: Find out all about Ra’s grandson, Damian Wayne, here!

Just like his TV counterpart, Ra’s is immortal. Both have access to the Lazarus pit, although Nable’s version seems to have inherited it as well as the title of Ra’s Al Ghul (Ra’s of the comics discovered the Lazarus pit, and the title is his own). ARROW’s Ra’s also isn’t as old as his comics version, hinting that he is possibly 200 years old. The Ra’s of the comics is at least 500 years old (though he exact age has never been confirmed). Both have learned, though, that the natural beauty of the earth is slowly being destroyed, and the only way to save it is to destroy humanity. While TV’s Ra’s sets his machinations in place with the League of Assassins, the Al Ghul of the Batman universe set up a huge global organization called the Demon (Ra’s Al Ghul in Arabic means the Demons Head), and throughout the years, he has tried to end humanity.

In the Batman story arc “Contagion,” a lethal virus called the Clench is released in Gotham, killing hundreds. Finding a cure for it becomes a battle to save Robin’s life, and it’s not until the follow-up story, “Legacy,” that it is revealed that Ra’s was behind the scheme. Gotham was just a testing ground, and “Legacy” follows Batman as he tries to stop the virus from going global. While escaping justice for his eco-terrorist crimes against the world, Ra’s next takes on the Justice League. In the “Tower of Babel” story arc in JLA #43-46, Ra’s discovers Batmans contingency plans to take down every member of the League. He almost destroys the group, stealing the corpses of Bruce Wayne’s parents to distract Batman from discovering his plans. He fails, but Batman is expelled from the JLA when the League learns that he had these plans in place. 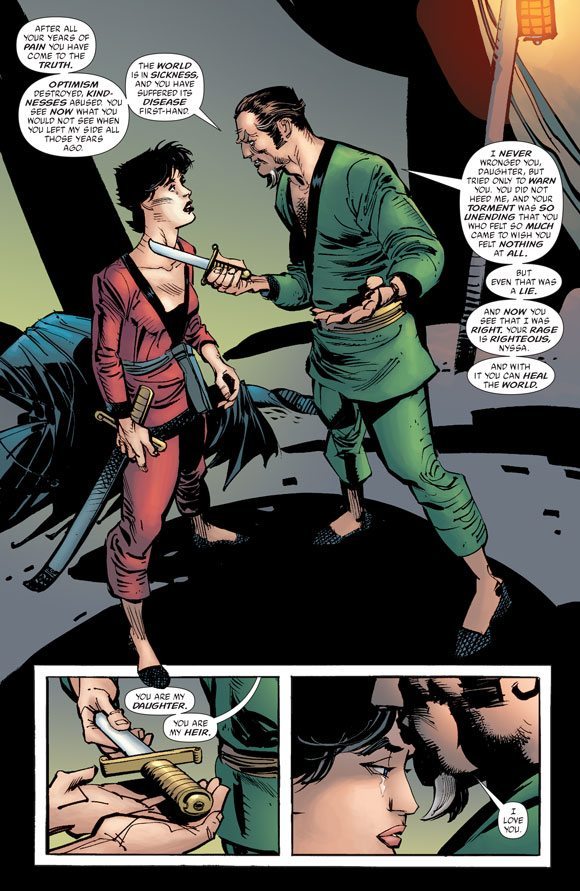 These comic threads appear throughout season 3 of ARROW, though not necessarily in that order. Once Oliver recovers from his deadly battle with Ra’s, his is offered (just like the Dark Knight) the chance to join Ra’s and be his successor. Oliver is initially tempted, he does not have the resources to fight crime that Batman has, but ultimately he turns it down. This does not go down well with Ra’s who frames the Arrow for murder and turns Star city against him. Ra’s also tells Detective Lance the Arrow’s identity, something his comics version has never done to Bruce Wayne (keeping that identity secret is Ra’s way of showing honor and respect to Batman). This leads to a manhunt for Oliver, who eventually accepts Ra’s offer. Once he joins the League of Assassins, he turns his back on his friends and family. This is later revealed to be a ruse with Oliver trying down to bring down the League from within. Once Ra’s realized this, he plans to infect Star City with a virus which would kill thousands and ultimately destroy it. In a final sword fight, Oliver ends Ra’s life leaving Ra’s daughter, Nyssa as head of the League.

Ra’s other daughter, Nyssa Al Ghul, (introduced in season 2 of ARROW) first appeared in the limited comic series “Death and the Maidens”. In the TV show, she is intended to be the eventual leader of the League before Ra’s offers that position to Oliver. Following her father’s death at Oliver’s hands, she inherits the League. In the comics, she was abandoned by her father at an early age. After years of searching for him, she finally finds him. She murders him, stabbing him in the heart. Once he is cremated, Nyssa and Talia become heads of the Demon and the League of Assassins.

Three years later, Ra’s returns, however, in the aptly titled Batman story arc “The Resurrection of Ra’s Al Ghul”. Before his body died, Ra’s had transferred his consciousness to another person. With his new body, dying Ra’s planned to take over his grandson’s, Damian Wayne, body. Foiled by Batman, he takes over the body of his estranged son, Dusan Al Ghul. Batman, however, has him committed to Arkham Asylum under a false name and drugged up on medication. (Spoiler alert) Ra’s eventually escapes.

LISTEN: Batman fan? Of course, you are! Listen to our analysis of Scott Snyder’s take on the Dark Knight in our ComicsVerse podcast!

During “Final Crisis” with the apparent death of Batman, Ra’s seeks out Dick Grayson to find out the truth. Ra’s refuses to believe Batman is gone and seems delighted when he finds out that he has come back. Following the death of his daughter Talia and his grandson Damian (in Grant Morrison’s “Batman Incorporated”), Ra’s steals their bodies from the Wayne’s cemetery. Batman, however, manages to retrieve Damian’s body and brings the former Robin back to life. 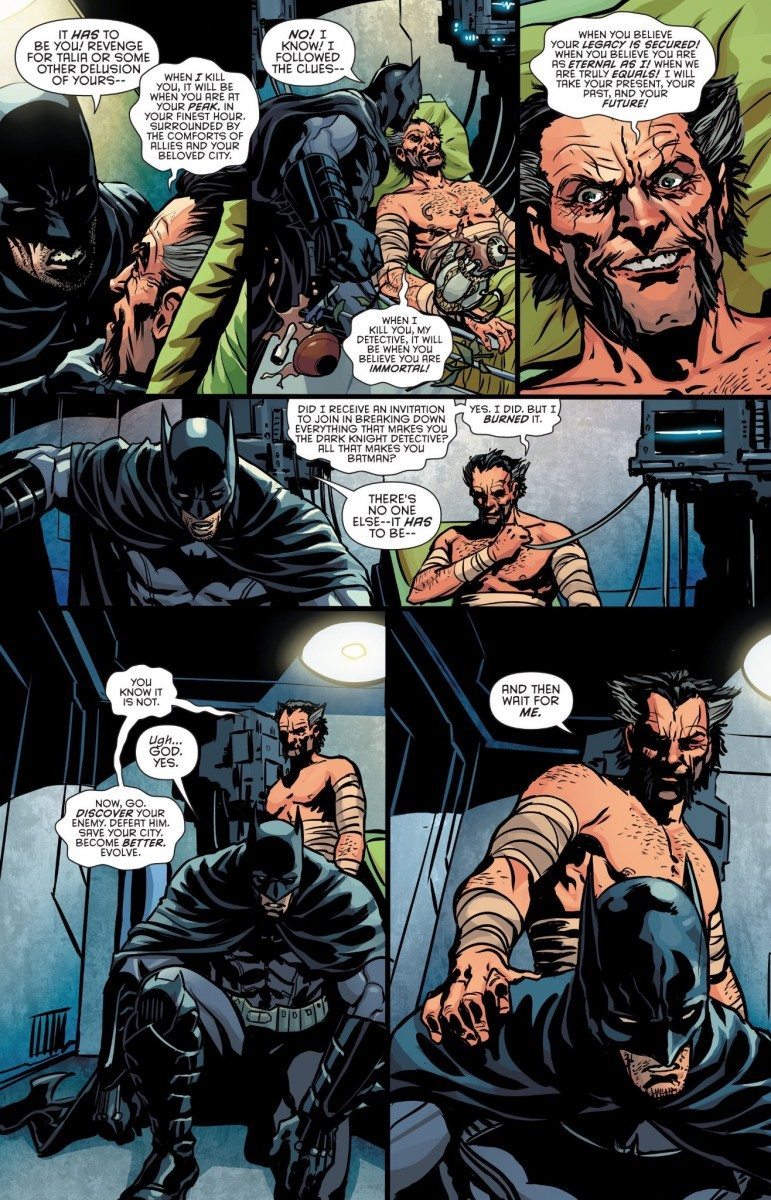 Ra’s was last seen in the first series of “Batman Eternal” as the possible villain behind Batman’s recent troubles. It’s revealed that Ra’s is not responsible but is rather biding his time to crush Batman once and for all. While he may no longer be terrorizing Oliver Queen in the DC TV Universe, Ra’s Al Ghul may outlive us all in the comics. With DC’s Rebirth on the horizon, it won’t be long before he raises his (Demons) head again.