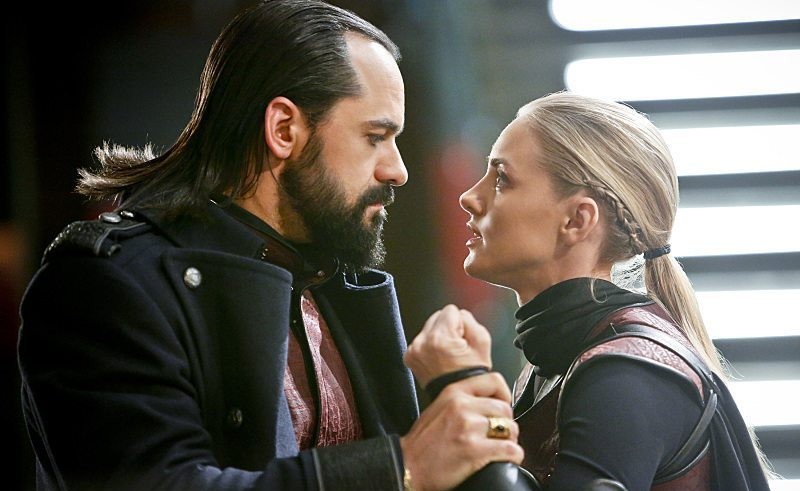 In the latest DC’s LEGENDS OF TOMORROW episode, “Leviathan,” the crew of the Waverider arrives in 2166 to take down Vandal Savage once and for all. Their plan is to infiltrate his army and kidnap him, but they are beaten back by Savage’s right-hand woman and his guards. Kendra recognizes a bracelet that Savage’s henchwoman is wearing as something that once belonged to her (and its potential in finally destroying Savage). Captain Cold and Heatwave plan on stealing the bracelet but end up taking its wearer as well. But this turns out to be no ordinary woman, but Cassandra Savage (played by Jessica Sipos), daughter to the immortal tyrant.

READ: Find out more about Captain Cold’s origins in his Character Spotlight!

Cassandra is devoted to her father, but in the face of overwhelming evidence and a heart-to-heart with Captain Cold about abusive fathers, she sees through Savage’s veneer and turns on him. By the end of the episode, she has joined Earth’s underground resistance, ready to help save the world from his clutches. While the episode wraps up the story of Cassandra (and it seems very unlikely she’ll be back anytime soon), there is still a lot of mystery and backstory about the character that we don’t get. If we want any more answers, we have to go back to the comics to get them. But that itself is easier said than done.

In the DC Comics Universe, Vandal Savage has fathered thousands of children, but the closest and most chronicled of his various children are his two daughters, Scandal Savage on New Earth (set in the DC continuity between CRISIS ON INFINITE EARTHS and FLASHPOINT)  and Kassidy Savage on Prime Earth (in the New 52 Universe).

Created by Gail Simone and Dale Eaglesham, Scandal Savage first appeared in VILLAINS UNITED #1 (2005). A viscous yet focused fighter (just like her TV counterpart), Scandal joined the Secret Six in opposition to President Lex Luthor’s call for villains to join together against all heroes. While the group (featuring Mockingbird, Catman, Deadshot, Parademon, Ragdoll, and Scandal) had no love for the heroes, they didn’t appreciate Luthor’s attempt to control them, and a number of villain-versus-villain clashes followed. It’s during this series that it’s revealed that she is the daughter of Vandal Savage, who in turn rescues her from Luthor when she is captured. 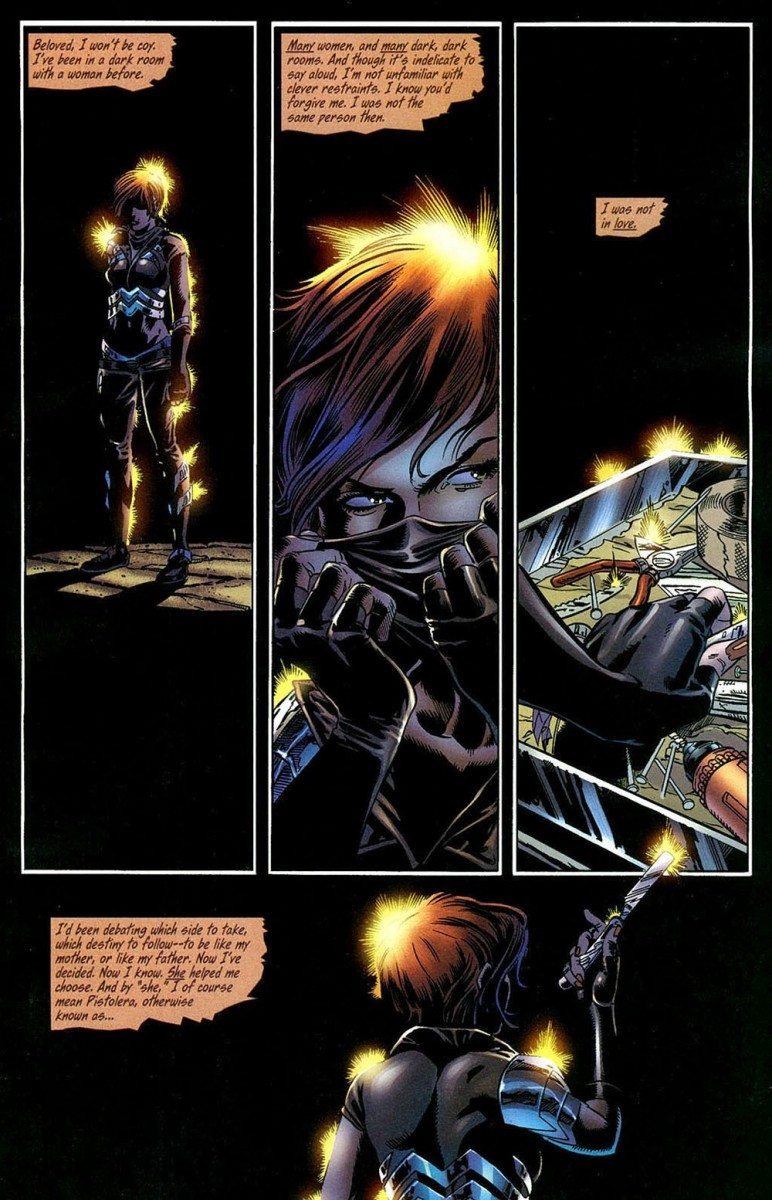 In the second volume of SECRET SIX (2006), she makes enemies with her father when she begins a relationship with female villain Knockout. Savage orders Knockout killed as a  warning to Scandal that he wants her to provide an heir for him. Fortunately, he fails, but a year later, in BIRDS OF PREY #109 (2007), Knockout is killed by an unknown assailant, sending Scandal into the throes of despair. Shortly after, she is head-hunted to join the Suicide Squad but declines. In response, she is sent to the planet Salvation, an off-world prison camp for the meta-human villains of the world. During the series SALVATION RUN (2007), she (along with most of the villains) manages to escape and get back to Earth.

READ: Vandal Savage makes Superman an offer he can’t refuse. Find out all about it in our review of SUPERMAN #50!

Back on Earth, she slips into alcoholism, grieving for her lost love. After acquiring a “Get Out of Hell Free” card, created by the demon lord Neron, she brings Knockout back to life. They rekindle their romance, Scandal finally letting go of the grief she had. In SECRET SIX #36 (2011), Scandal and the team are defeated by the Justice League and the Teen Titans. This was the final time Scandal appeared in DC Comics as the comics company launched the New 52 comic line shortly after. While Vandal may have lost a daughter in one continuity, he gained another one in the New 52. Her name was Kassidy Savage.

In the New 52 universe, Kassidy Savage is one of the FBI’s top criminal profilers. Taking the last name Sage to distance herself from her family heritage, Kassidy Sage was created by James Robinson and Bernard Chang for the storyline ‘Savage’ which ran through issues 9 to 11 of DC UNIVERSE PRESENTS (2012). 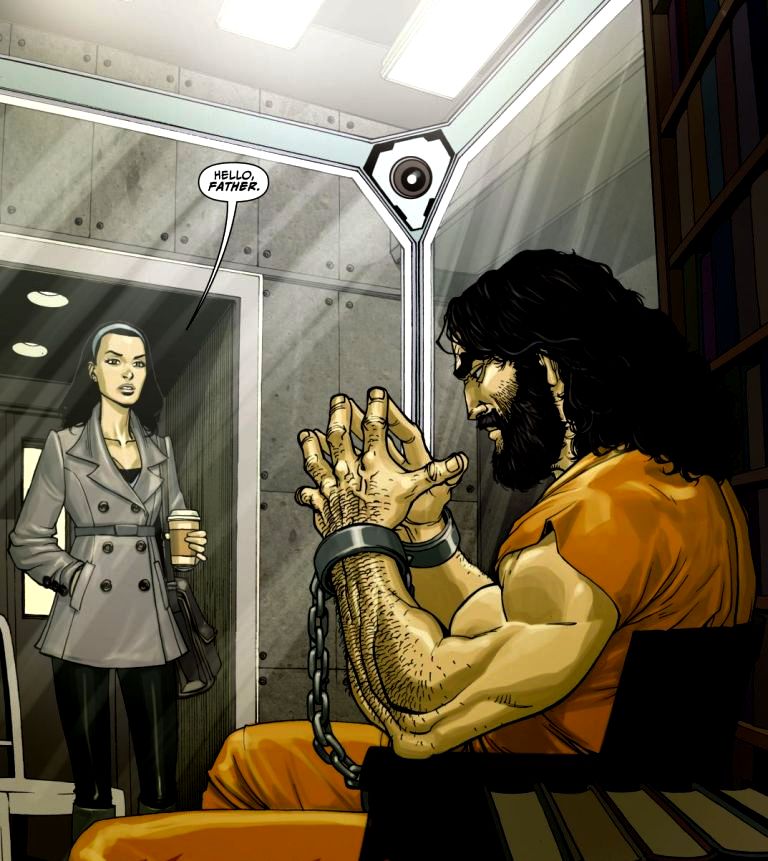 Discovering that her father was a serial killer, using human sacrifice to retain his immortality, Kassidy cut all contact with him. Years later, working with the FBI, a copycat serial killer called The Swan Killer is murdering people in the same way her father did years ago. Forced to team up with him, they bring the killer in, but this does not bring the two any closer together. Instead, it reinforces Kassidy’s hatred for her father, and she abandons him to rot in his jail cell. Vandal, though, escapes soon after. Whether he visits her again or not is yet to be explored. She has not appeared in the DCU since.

READ: Hunger for more time travelling escapades? The Flash has gone through time and space. Find out more of his adventures, and other essential The Flash stories, here!

LEGENDS OF TOMORROW’s Cassandra Savage shares more in common with her pre-New 52 counterpart, Scandal, with strong defense skills and a slightly cold demeanor. But what truly connects Cassandra to Scandal and Kassidy is her rebellion against her father. Formerly a loving daughter, once she discovers his true nature, she battles against him with every fiber of her being.

None of them want to live in the shadow of their cruel father. They want to make lives of their own. Scandal denies Vandal an heir while Kassidy’s surname change is an attempt to cut ties with the Savage family name. But Cassandra takes it even further, ready to take down his dictatorship in 2166. She has a lot of trust to build with the rebellion she has joined, but with her skills and knowledge, she could well turn the tide against Vandal Savage’s onslaught. Only time (travel) will tell.