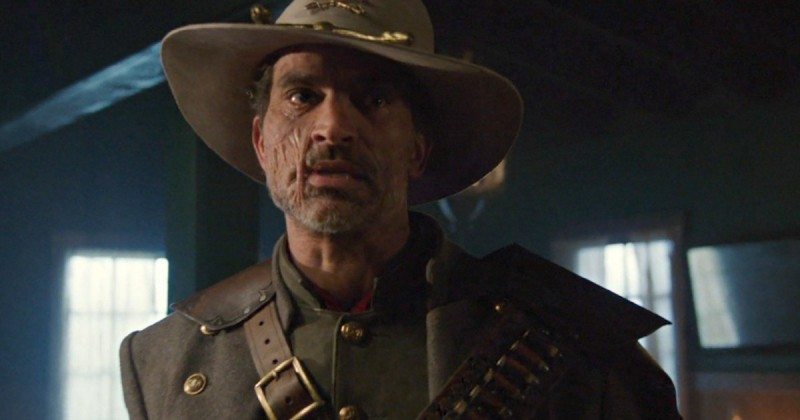 In the latest episode of DC’s LEGENDS OF TOMORROW, the crew of the Waverider hide out in the town of Salvation, Dakota in the year 1871. They are being pursued through time by the Hunters, a group of mercenaries hired by the Time Masters to kill Rip and his team. Salvation offers a break from the chase, but it’s not long before the gang get into trouble.

Fortunately, Jonah Hex (Johnathon Schaech), a local bounty hunter, is on the scene to lend a hand. Hex is a gruff, seasoned gunslinger, the right side of his face a horrible scar of torn flesh. He’s also familiar with time travel, having been a friend to Rip Hunter in a previous unseen adventure. We learn that not only did Rip’s jacket once belong to Hex, Rip also named his son, Jonas, after him. In the shoot-out finale with the Hunters, Hex more than holds his own fighting alongside his futuristic compadres.

But where has Jonah come from? The episode gives no real back story to him. To get some detail on his origins, we have to revisit his first appearance in comics back in 1972. 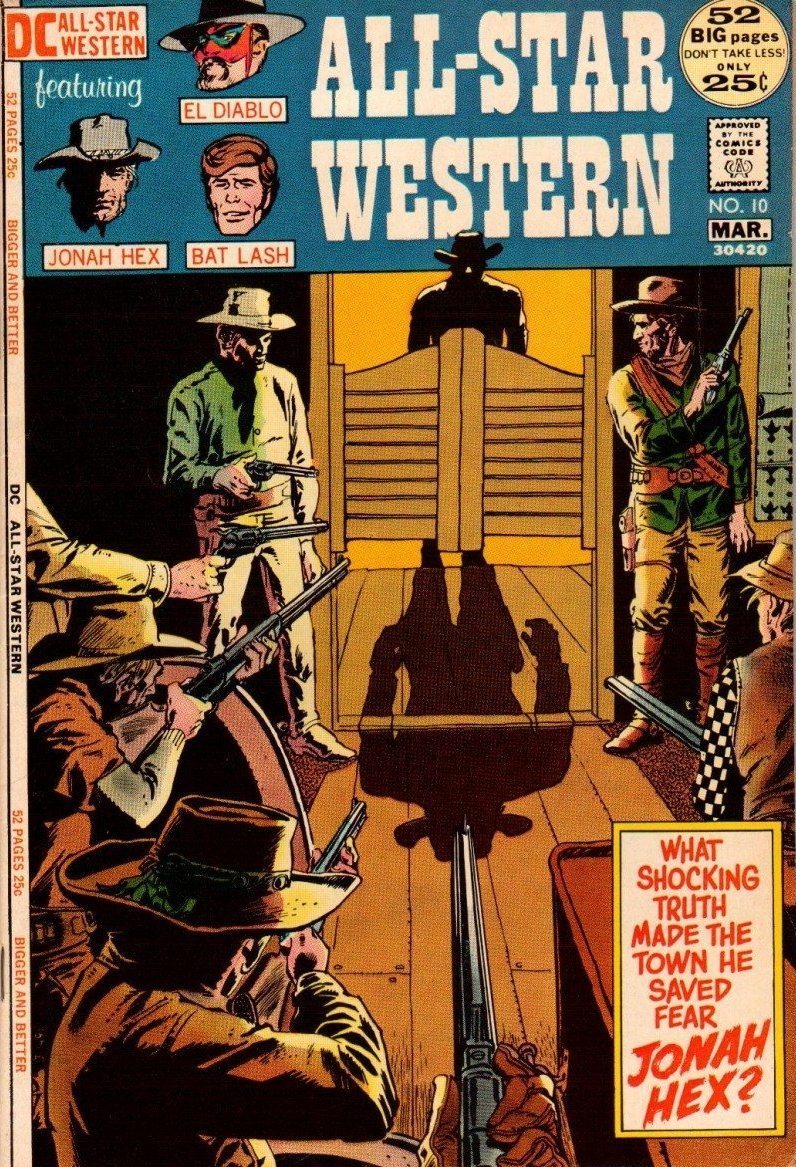 Created by John Albano and Tony DeZuniga, Jonah Hex first appeared in ALL-STAR WESTERN #10 in March, 1972. These early stories showcased a hardened bounty hunter, ready to shoot at the drop of a hat. He is portrayed as a loner only making acquaintances to make money. However, the moral code he lives by means he is firmly on the right side of the law. ALL-STAR WESTERN became WEIRD WESTERN TALES with its 12th issue, and Jonah’s popularity meant he headlined this book until he got his own comic series, JONAH HEX, from 1977 to 1985.

READ: THE FLASH TV series deals a lot with time travel. Check out how the comics inspire these storylines here!

These issues told us a lot about Jonah’s past and how he got his iconic scar. He was sold to an Apache tribe by his father at the age of 13, and having proven his worth to the tribe, he became a full-fledged member. After the tribe’s chief adopted Jonah, jealousy arose between himself and the chief’s biological son, Noh-Tante. The rivalry rose to such a degree that it ended in trial by combat, where Jonah killed Noh-Tante. The chief demanded that Jonah’s face be branded with the mark of the demon and exiled, and he eventually used the skills he had learned from the tribe to eventually become a bounty hunter. 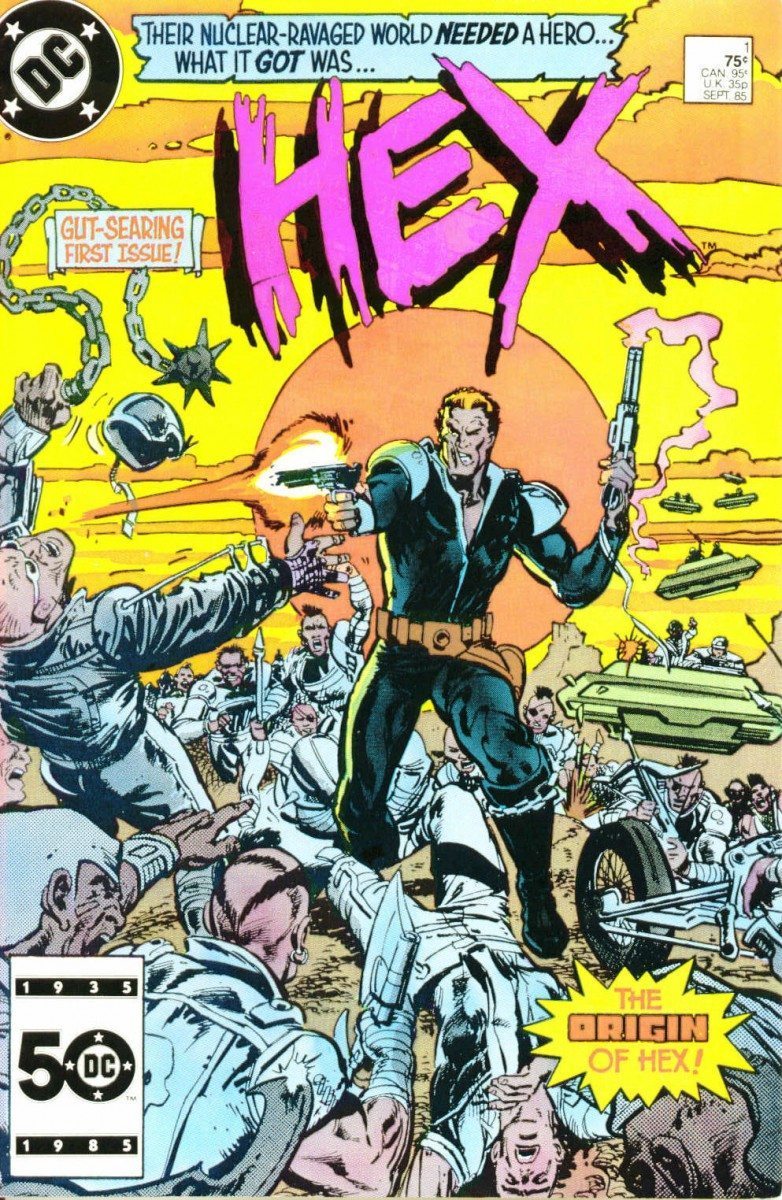 Jonah’s adventures were not just rooted in the Western genre. He, along with a group called the Five Warriors of Forever fought against and then with the Justice League and Justice Society in JUSTICE LEAGUE #159 and #160 (1978). This was his first time-traveling adventure but certainly not his last.

Appearing in CRISIS ON INFINITE EARTHS #3 (1985) fighting against the Anti-Monitor’s plans, his own series ended at issue 92 when a mysterious red light made him disappear amidst a gun brawl. He reappeared in HEX #1  (1985) where he had been transported to the 21st century by Reinhold Borsten, a villain who wanted to use him as a warrior. Jonah, though, was not so welcoming to the idea. Borsten was eventually defeated and killed after a failed attempt by Jonah to get back to his own time. Despite this setback, he eventually made it home (though it’s never explained how). The series ended after 18 issues.

READ: With DC’s Rebirth on the horizon, now’s the perfect time to look the legacy of their characters!

His next adventures took place under the Vertigo imprint in limited series where he fought zombies, monsters, and spirits until he received another series, JONAH HEX, in 2006. These consisted of standalone stories focused on the grittier side of the DC Universe. Following the New 52 line-wide reboot, this series was canceled and replaced with ALL-STAR WESTERN in 2011. In this series, Jonah teamed up with Amadeus Arkham in Gotham City in the 1800’s on the trail of a serial killer. 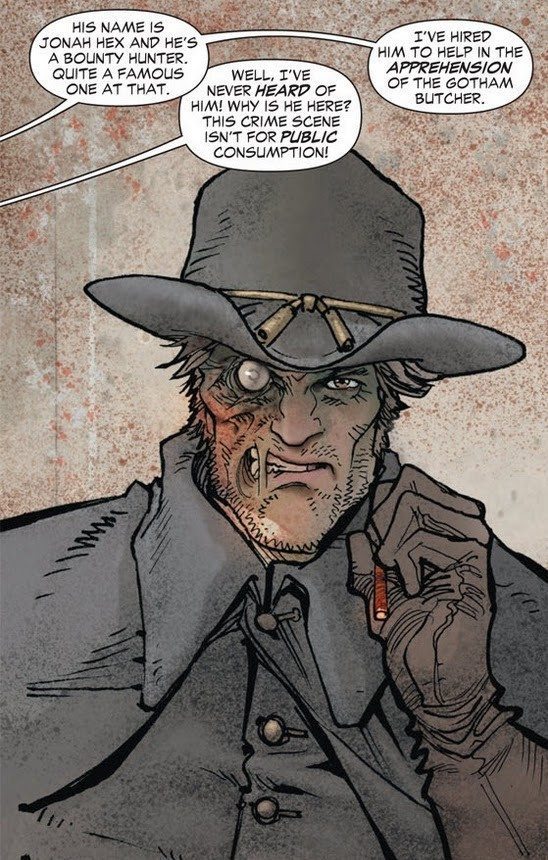 Jonah has been on some crazy adventures and has been pulled out of his own time on a number of occasions, but he has always found a way to adapt and stand up to whatever threat has come his way. While he has only appeared on the latest episode of DC’s LEGENDS OF TOMORROW, there is great potential for him to join forces with Rip Hunter in the second season, as his origins and adventures are ripe for adapting to future seasons. Only time will tell whether he appears again in DC’s newest relaunch, Rebirth!