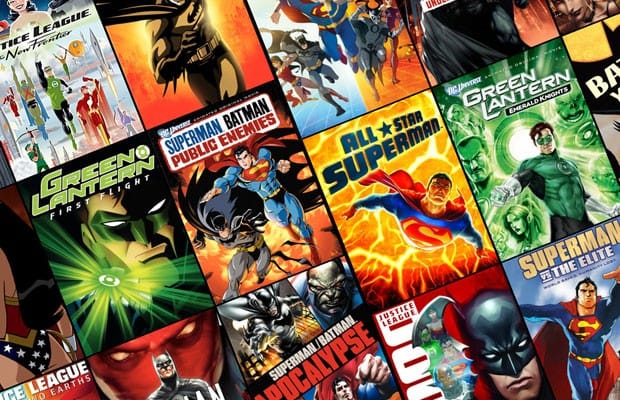 With BATMAN V SUPERMAN: DAWN OF JUSTICE around the corner, followed by CAPTAIN AMERICA: CIVIL WAR, the Marvel/DC pseudo-rivalry is heating up. Fans have long debated over which company has the better films, comics, cartoons, et cetera. One medium, however, that has a clear winner is direct-to-video animated films. DC has been crushing it in this field for a very long time, though these films often go unnoticed by the average moviegoer and fan.

DC has a total of 24 Animated Original Movies, the first of which was released in 2007. For almost ten years, DC has been putting out a steady stream of well-made animated films for its more mature audiences. All but two of these films have been PG-13, with ALL-STAR SUPERMAN and GREEN LANTERN: EMERALD KNIGHTS being the only movies with a PG rating. Slated for release this year is the highly anticipated adaptation of Alan Moore’s famed Batman story “The Killing Joke,” which is rumored to be rated R. Though most of these animated original films are for mature audiences, if THE KILLING JOKE is rated R, it will be the first of the animated originals to bear this rating.

Most fans may not be especially familiar with these animated originals and may wonder, “What exactly are they?” These DC Universe Animated Original Movies are mostly adaptations or translations of some of DC’s biggest and most popular storylines. The first Animated Original Movie they released was SUPERMAN: DOOMSDAY. SUPERMAN: DOOMSDAY is an adaptation of the early 90s story arc “The Death of Superman,” in which Superman is seemingly killed in a fight with the unstoppable monster Doomsday. Though a much looser adaptation of the story arc than some of the other original films, SUPERMAN: DOOMSDAY undoubtedly started an awesome trend for DC.

It’s easy to see how these films can be perceived as inaccessible to general audiences, but each film is standalone, meaning you can throw one on and enjoy it without the context of a greater canon hanging over you. These films are great for someone who loves these DC characters but may not have the time or resources to get a comic in their hands. Among these films are solo origin stories for Wonder Woman and Green Lantern, as well as adaptations of several well known Batman stories, such as Frank Miller’s “Year One” and “The Dark Knight Returns,” and Judd Winick’s 2005 arc “Under The Hood.” Plus, with the prevalence of streaming services and direct-to-computer rentals, they are easier to find than ever.

Lately the DC animated originals have taken a page out of the Marvel Cinematic Universe handbook, opting to make some of their more recent films share one animated universe, with several films being sequels and tie-ins to other films. The producers and directors of these films have even gone as far as to keep the same voice actor for each character as the films go on. This shared animated universe was kicked-off with JUSTICE LEAGUE: WAR, an adaptation of Geoff Johns and Jim Lee’s “New 52” Justice League reboot. The films that share a universe with WAR are SON OF BATMAN (an adaptation of Grant Morrison’s “Batman and Son” story arc) and its two sequels, BATMAN VS. ROBIN and BATMAN: BAD BLOOD.

The DC animated originals universe boasts a great lineup of films, ranging from a film set in the universe of the Arkham games to a collection of Green Lantern short films. For whatever reason, these animated films do not resonate on the cultural forefront in the same way that the comics, TV shows, and films do. This does not detract at all from their quality; the DC animated universe is a collection of well-told superhero stories in an incredibly accessible medium. Hopefully more people will watch them with the BATMAN V SUPERMAN hype-train around the corner!