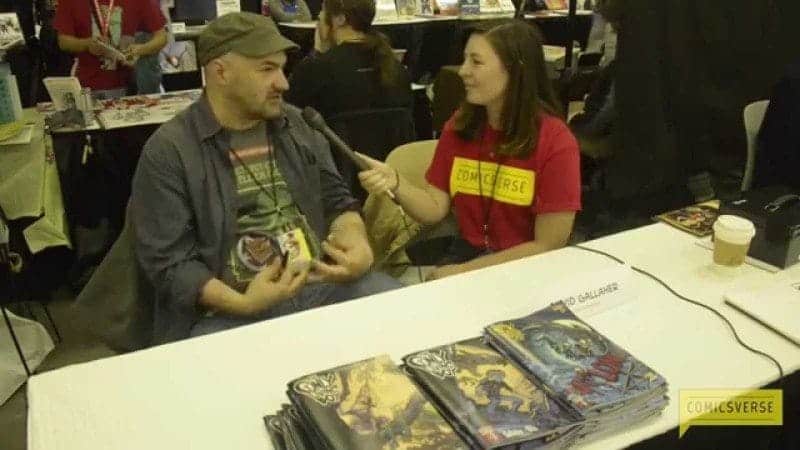 When we were at Special Edition: NYC 2015 last month, it became clear on the first day that you didn’t have to walk too far to run into an influential comic book artist that has their fingers in a lot of different comic books and genres. David Gallaher was no exception with his popular work on the CONVERGENCE GREEN LANTERN CORPS in addition to his own personal project THE ONLY LIVING BOY.

A superhero lover from the age of three, Gallaher clearly has a passion for the world of comics. With Superman as an initial entry point, Gallaher enjoys working on comics that revolve around a superhero’s noble attempts to do good and make the world a better place. Since his entry into the world of comics came from a Superman film at the age of three, it is not surprising to hear his support of Marvel films like The Avengers and DC series like The Flash, but it is interesting that he has a very favorable appreciation for the new fans these popular items have brought. For Gallaher the more is the merrier, and he has also noted accurately that now more than ever superheroes and comics are becoming an unavoidable part of the popular culture lexicon.

With a disciplined approach to comic book creation, seriously I have never encountered a more impressively well planned creation process then the one he described, Gallaher exudes a confidence that any creator would be envious of, and his enjoyment of metaphor would make any science fiction or fantasy lover proud. Coming from the humble beginnings of the digital comic section of Marvel, Gallaher has observed the growing array of virtual titles being offered, and even created some own virtual comics, like THE ONLY LIVING BOY.

With a fervor for the world of comics and a positive outlook at the way comics have changed over the last few years, Gallaher provides a lovely insight into what can make comic books and their heroes so great. Special Edition: NYC was clearly a place that Gallaher was comfortable, and his interview just shows one of the many different approaches comic book creators have to their amazing work.