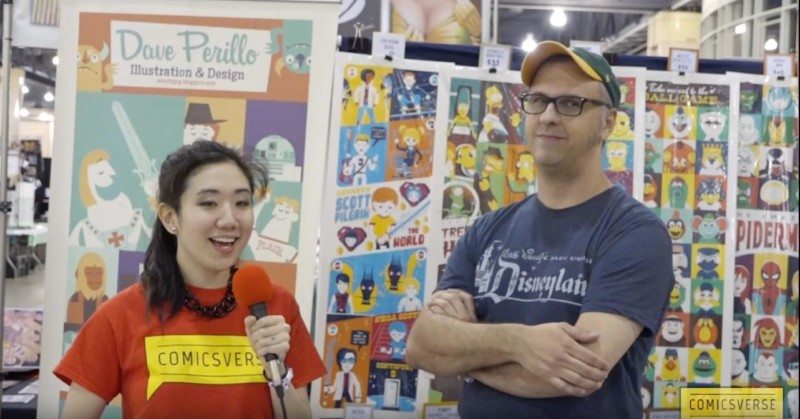 In a world where the variety in media is vast, Dave Perillo manages to set himself apart from other artists in his retro, Hanna Barbera-styled illustration at Wizard World Philadelphia 2016. Dave Perillo has made a name for himself as a design-driven artist, inspired by a variety of different sources like old school Sci-Fi films, Jim Henson, and Alfred Hitchcock. Not only was Dave Perillo nice enough to let ComicsVerse’s Kay Honda interview him, but he also donated some of his art prints for the art raffle we do at conventions!

From first glances, you can tell that Dave Perillo is heavily influenced by classic advertising iconography of popular fandoms and posters for notable bands like Flight of the Conchords, Fall Out Boy, and My Morning Jacket. Not only does Dave Perillo’s artwork give off the heartwarming 50s vibe, but it also provides a new lens to view current fandoms. While his pieces for animated TV shows and classic films are fun and beautifully done, much of the work he does with old-school superheroes like Captain America or the Amazing Spiderman combines a certain nostalgia for the Golden Age of Comics and the retro style of commercial advertising of that time.

READ: Like a writer with a sense of humor? Check out our written interview with famed writer and comedian, Arie Kaplan!

Talking to Dave Perillo and looking at the variety of content in what he produced proved that Dave Perillo, at heart, is a fan of all forms of media, including movies, cartoons, and comics. His own appreciation and love is very apparent in his precisely drawn and designed work for popular subjects like the Avengers, FUTURAMA, and Batman’s Rogues Gallery. Get to know Dave Perillo as a person and an artist in this quick interview!