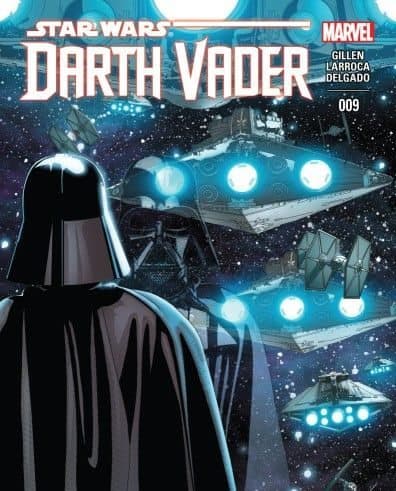 Has Darth Vader finally met another Imperial worth his time?

Darth Vader, while always up to no good, has been up to something recently which the Empire wouldn’t take too kindly. Assigned another watchdog, Vader has to cover his tracks to keep Inspector Thanoth from discovering that he was actually the one who recently robbed an Imperial ship. Thanoth is very quickly proving, however, to be a worthy adversary.

Plot has never been a particular strong suit for the “Star Wars” comics, some getting by on brand recognition alone, while others thrive on strong character work and compelling action. DARTH VADER, especially this issue, falls into the latter category. Darth Vader’s duplicitousness within the Empire is an interesting idea, but it hasn’t reached any truly compelling story points since it began. The stakes don’t necessarily feel high, and while it was certainly refreshing to see the book begin with Vader being punished, it’s hard too imagine he’ll fall on too-hard times, what with him being the main villain in two movies that take place after this title.

READ: TOM BACON REVIEWS THE FINALE OF THE MOST IMPRESSIVE TITLE OF MARVEL’S ‘SECRET WARS’ LINE!

So if you’re going to start reading DARTH VADER (or keep reading it), don’t expect a breathless page turner, leaving you desperate for the next issue.

For one, it’s surprising how well Vader as a character works with others. There was enough of a taste of his dynamic with Grand Moff Tarkin in the first film to be interesting, and it’s great to see him work closely other Imperials. So far, the relationships have been contemptuous, with Vader just waiting for a reason to close his invisible fingers around their throat. With Doctor Aphra, and now Inspector Thanoth, however, it’s great to see someone around Vader who, at the very least, he finds acceptable.

READ: OUR EXCLUSIVE INTERVIEW WITH UNIT 44’S WES LOCHER IS WORTH EVEN DARTH VADER’S TIME!

Vader seems intrigued by Thanoth – even if his job, if he does it the way he’s supposed to, will mean finding Vader guilty of crimes against the Empire! Thanoth seems to be of a very similar mind to Vader. Though he shares Moff Tagge’s opinion that Vader can be a blunt object when precision is necessary, Thanoth actually respects Vader. Additionally, Thanoth is the loquacious type, so the conversations, while often one-sided, leave opportunities for humor. You would think there’s no place for that in a book about Darth Vader, but it actually works well and doesn’t feel forced. While it’s never really laugh-out-loud funny, there are good moments, especially one particular silent panel featuring a shared look between Thanoth and Vader. 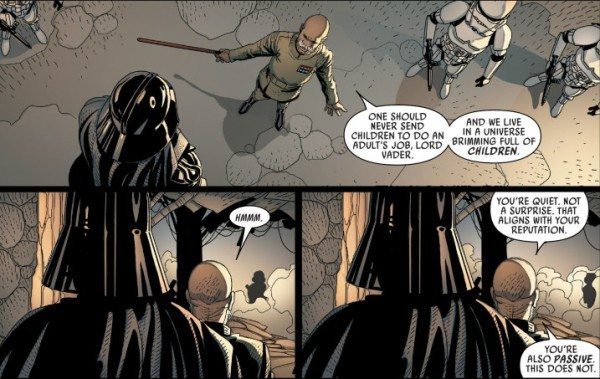 READ: WANT FUNNY AND SET IN SPACE? CHECK OUT OUR REVIEW OF DEADPOOL VS. THANOS!

Writer Kieron Gillen is helped by artist Salvador Larocca in bringing those beats to life, if Larocca doesn’t exactly bring much else to the table. The art is fine and competent, and has been consistently so for nine issues, but it’s still not doing anything particularly new. There are even times when the proportions seem a little odd. I wonder if it’s not because Larocca’s style betrays a livelier, buoyant slant, and he’s handicapped by the grounded, dark world of Star Wars–and the devotion to well-established character designs. 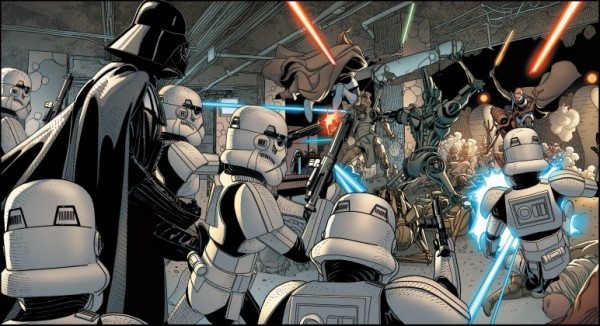 Then again, Gillen and Larocca were given a chance to introduce several new characters in their run so far, but none of their designs have been particularly memorable (though I will give them special acknowledgement for Thanoth’s haughty, walrus-like appearance, monocle and all).

Again, as has been the case with most other “Star Wars” issues–if you’re not a fan, this isn’t essential reading. DARTH VADER #9, however, makes the strongest case against that yet with sharp characters and engaging dynamics.

CHECK OUT MORE OF OUR REVIEWS!