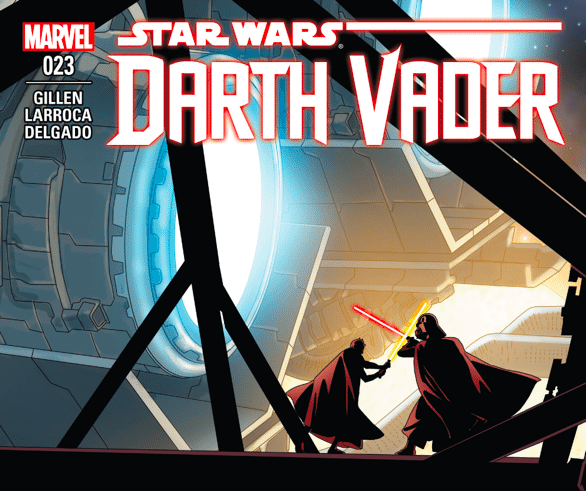 The twenty-third entry into DARTH VADER from Kieron Gillen and Salvador Larroca is like a sandwich that’s missing a slice of bread. Sure, you can eat it and it will fill you up, but it’s missing something pretty key to its overall enjoyment. That being said, the issue does a lot to advance the story, set up the conflict for the final two issues, and entertain as a whole. Several scenes, however, fall short of expectations and leave an unfulfilled taste in readers’ mouths.

READ: We ranked all of Marvel’s STAR WARS comics so far!

This issue finds Vader, Aphra, and the droids on The Executor, which is doomed to perish. Vader must confront Morit and Cylo before time runs out, while Aphra and the others must find a way to save themselves and Vader all at once. By the end, after one of the series’ most interesting cliffhangers, the writer sets the series up for an exciting finale. 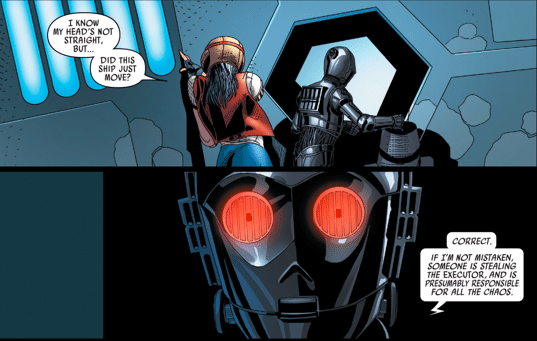 This book is at its best when its multiple characters each find time to shine. Thankfully, they’re all given a small piece of the spotlight this issue. Watching Aphra and the droids navigate the ship and fend off enemies is entertaining enough. Given the ticking clock that is forcing them to move quick—and the decision to team up with Black Krrsantan—it’s a wild ride with some great characters. Their dynamic is very enjoyable, and at this point, there’s no telling if any of them are going to survive. It is rare in a STAR WARS comic that the stakes are this great, considering most characters are known to survive to appear in the next film. However, there’s no telling if Aphra is going to live in the end. This is a great asset to the book and makes the wait for the next issue feel dreadfully long.

Vader’s showdown with Morit is, unfortunately, disappointing. The set up is great considering their fight actually takes place in space, but Vader wins so fast that it’s almost jarring. There is barely any struggle before Vader stands triumphant; what little is seen is gone too quick. It’s gorgeous to look at, but never quite feels like Morit was as much of a threat as he should have been. This quickly unfolds as Vader faces Cylo in what is expected to be a final showdown. However, Cylo has a magic button that’s able to shut down Vader completely.

LISTEN: Check out our latest podcast, all about the hit series SAGA!

This may feel totally out of left field to some, but one must remember that it was Cylo that helped turn Anakin into Vader in the first place. That being said, it does feel out of place for the book as a whole. It is quite convenient that Cylo should have such a device, and it won’t be until the next issue takes the scene a step further that we see how it all plays out. 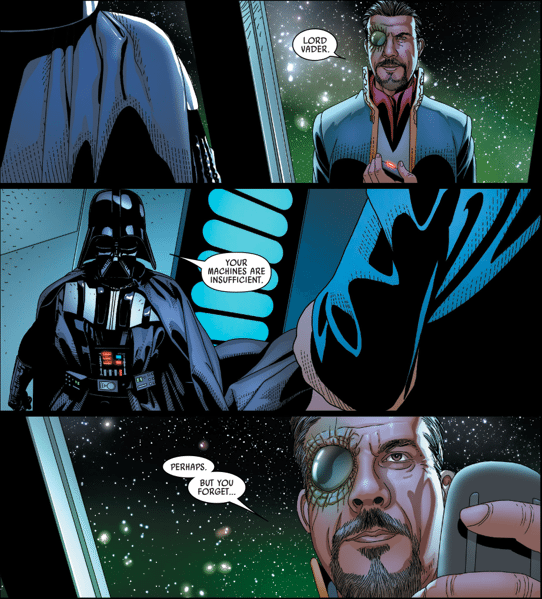 Larocca’s art makes up for the issue’s swift pace. His work in this series has yet to disappoint, and the scenes in space are marvelous. Every time Vader is drawn he looks menacing and fierce, which says a lot considering he’s unable to make facial expressions. This carries the issue in some ways, as the quick fight scenes are hard to turn away from. Hopefully, his work continues to thrill in the final two issues, but it will be sad to see him depart from a book he’s made so stylish and pretty.

It would seem DARTH VADER has faltered a bit in its last few issues. While the meat of the book is still well done, the potatoes seem to be a little undercooked. With just two issues left, the series could end on a high note or let its readers down. Considering this creative team, it is a safe bet it will be a finale to remember.