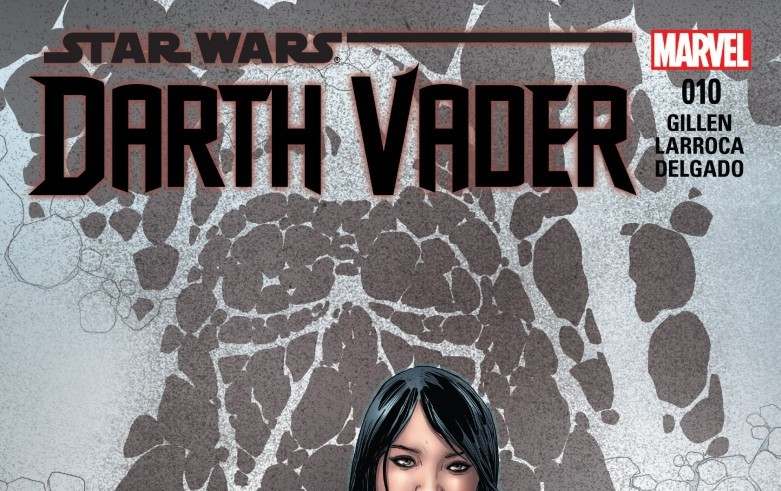 Darth Vader’s search for the pilot that destroyed the Death Star continues to be frustratingly out of his hands. He has to deal with the Empire looking over his shoulder, and only then will he be able to join Doctor Aphra, who’s continuing the search in his stead. What will she find? Will Vader’s treachery be discovered? Will we ever find out who destroyed the Death Star? 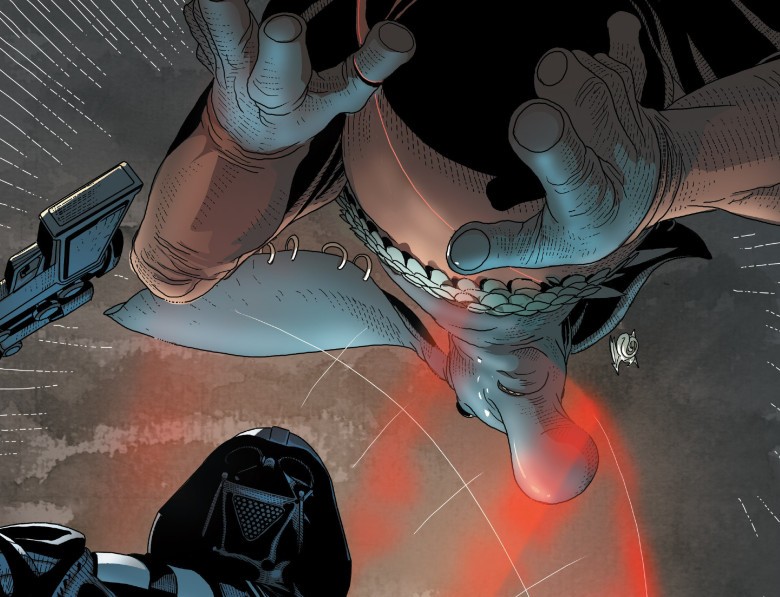 This is a strong issue of DARTH VADER. It’s a shame the plot is tired. Ten issues in and Vader is still looking for Luke. I just realized that. Still? If this were a TV show I was binge-watching it wouldn’t matter so much because it would unfold quickly, but when this story comes out in monthly installments, the general arc requires a bit of satisfaction, doesn’t it? Vader finds out more about Luke Skywalker in this issue, but he doesn’t exactly move closer to finding him. There’s no general progress in the story. We’re still dealing in subplots and more subplots.

When they’re executed this well, though, it’s hard to truly be upset about it.

READ: CHECK OUT THE REST OF OUR DARTH VADER COVERAGE!

The art demands immediate addressing, especially because the issue starts out so boldly. There’s a definite less-is-more approach to the visual storytelling this time around, and it’s remarkably effective. From Vader’s first kill in the issue, to the final cliffhanger, you’re given just enough to put the ideas together in your head, and they land. Salvador Larocca is back on pencils this month and it’s as if the entire team celebrates by turning in their most dynamic and captivating work yet.

It’s fitting, because DARTH VADER #10 is the most compelling issue yet. It’s confident, and is more than willing to show rather than tell. That’s important, because there are some great moments that would have been less effective otherwise. Vader’s new partner and watch dog, Thanoth, continues to impress Vader, and the reader buys it, because he’s genuinely impressive, proving himself brilliant and clever and effective in a way even Vader can’t argue with–which says a lot in itself. On top of that, we learn a lot about Aphra in a moment that could have been a cheap exposition-heavy monologue but turns out to be a moment of self-awareness in both her and the issue. It contrasts a lot of ideas and visual cues to craft a poignant moment that reveals much about her past, and her attitude, and, possibly most enjoyably, provides another opportunity for her interrogation droid, Triple Zero, to steal the show.

READ: HOW ABOUT A JUMP INTO THE FUTURE? CHECK OUT OUR COVERAGE OF SHATTERED EMPIRE!

I can’t help but feel that the team behind DARTH VADER is a little hamstrung by this story they have to tell. More and more, the idea of Vader chasing but obviously being unable to catch Luke Skywalker for movie-related reasons seems like something dictated from the top-down, and they’re fighting against it. They recognize the potential for great character dynamics with Darth Vader, for opportunities to reveal more about the world and even play a little with the movie mythology (there’s a moment that becomes tense and interesting only if you’ve seen the movies, which is both a good and bad thing). I’d be happy and eager to call DARTH VADER #10 an excellent issue if it doesn’t happen beneath the specter of a main arc that’s lost all its urgency.

Still though, for a story that works with a handicap, DARTH VADER #10 is strong all the way around and well-worth a read.