As someone who loves horror, I think I have the right to say that the genre tends to be problematic. Horror is notoriously misogynistic, ranging the spectrum between “sexploitation” to graphic sexual violence against women. Some of the most famous horror films are transmisogynistic, with the killer being a biological man who dresses like a woman. Another problem that plagues the genre is a lack of black representation. Very few mainstream horror movies, television shows, video games, or comics feature a black protagonist, or at least one that is well-rounded and meant to be taken seriously. In horror, a black person rarely gets to be the hero. In fact, it’s become a well known trope that the token black person dies first.

A very notable exception to this tendency is George A. Romero’s NIGHT OF THE LIVING DEAD. This 1968 cult classic stars Duane Jones as Ben, the film’s brave and intelligent hero. A more recent example is Jordan Peele’s GET OUT. GET OUT tells the story of a black man whose visit with his white girlfriend’s family takes a turn for the horrific. Not only do both NIGHT OF THE LIVING DEAD and GET OUT feature black protagonists, they also address racism either overtly or in the subtext. At the end of NIGHT OF THE LIVING DEAD, Ben, the only person in the house who survived the night, is shot by a white armed posse who mistakes him for a zombie. Unlike NIGHT OF THE LIVING DEAD’s subtle approach to addressing race, GET OUT’s entire plot revolves around the insidiousness and omnipresent nature of racism.

READ: Can’t get enough horror? Here’s 5 more horror comics you should be reading! 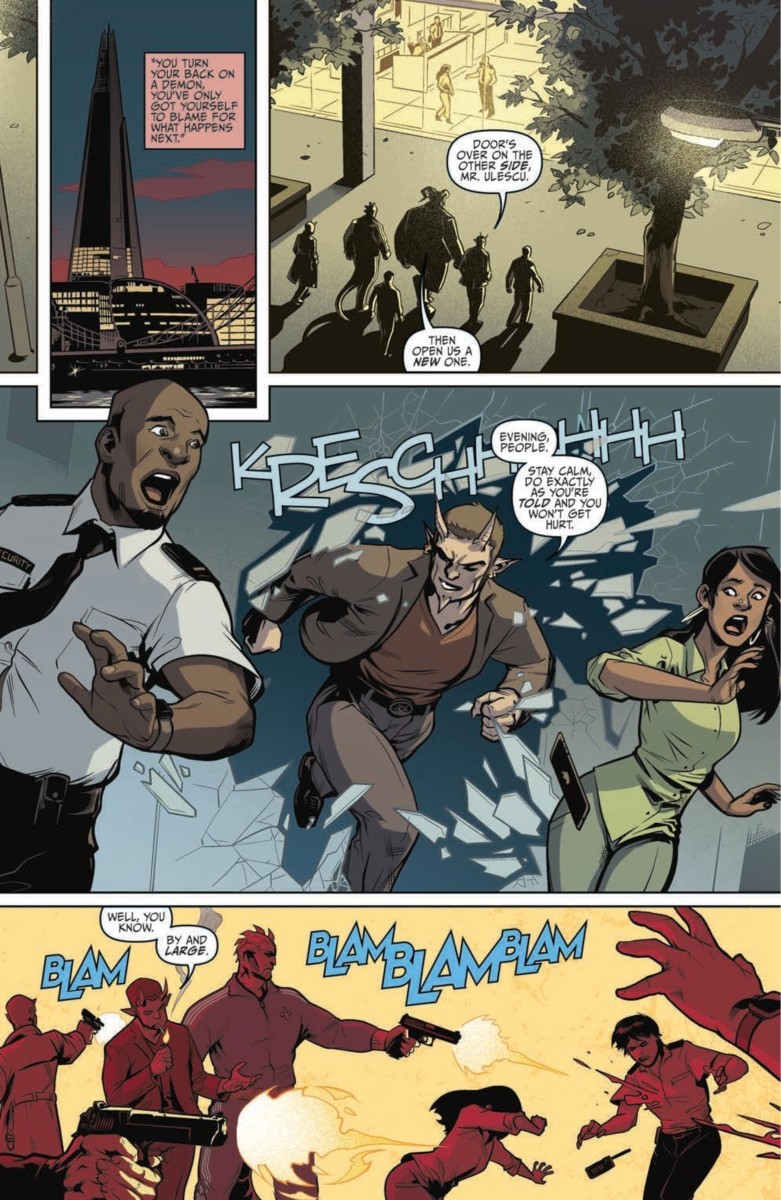 So, what is DARKNESS VISIBLE actually about? Created by Mike Carey and Arvind Ethan David with art by Brendan Cahill and David Lafuente, DARKNESS VISIBLE takes place in a universe where humans co-exists with demons. Based on what we learn in DARKNESS VISIBLE #1, the demons are spiritual entities that are capable of materializing in physical form or, if invited, sharing a body with a human. The demons have also become notorious for their criminal activities. As a detective, Aston comes face to face with the demons at their worst. And, without spoiling the end of DARKNESS VISIBLE #1, it seems that Aston is poised to become much closer to these demons than he would like.

READ: Enjoying this article so far? Then you should read this article on how black female characters are often shaped by racial ideologies!

Although the demons have become perceived as a nuisance by Aston, humanity continues to co-exist with them. Admittedly, we don’t know too much about the demons from just the first issue of DARKNESS VISIBLE. However, considering that humanity is at least trying to co-exist with them, I don’t think it’s likely that the demons are all just pure chaotic evil. Otherwise, the demons would try to completely destroy humanity or vice versa. Again, this is just speculation. However, I do feel comfortable saying that the premise of DARKNESS VISIBLE is at least meant to be a loose allegory for racism.

First of all, the writers of DARKNESS VISIBLE, Mike Carey and Arvind Ethan David, intentionally bring up racism in a conversation that takes place between Aston and his daughter, Mags. After Mags performs in a production of Shakespeare’s THE MERCHANT OF VENICE, she comments to her father that she felt the person who played Shylock did a great job. Aston agrees with her, saying Shylock made a great villain. Mags however, expresses that she doesn’t think Shylock is a villain, rather “only a monster because everyone treats him like one.” 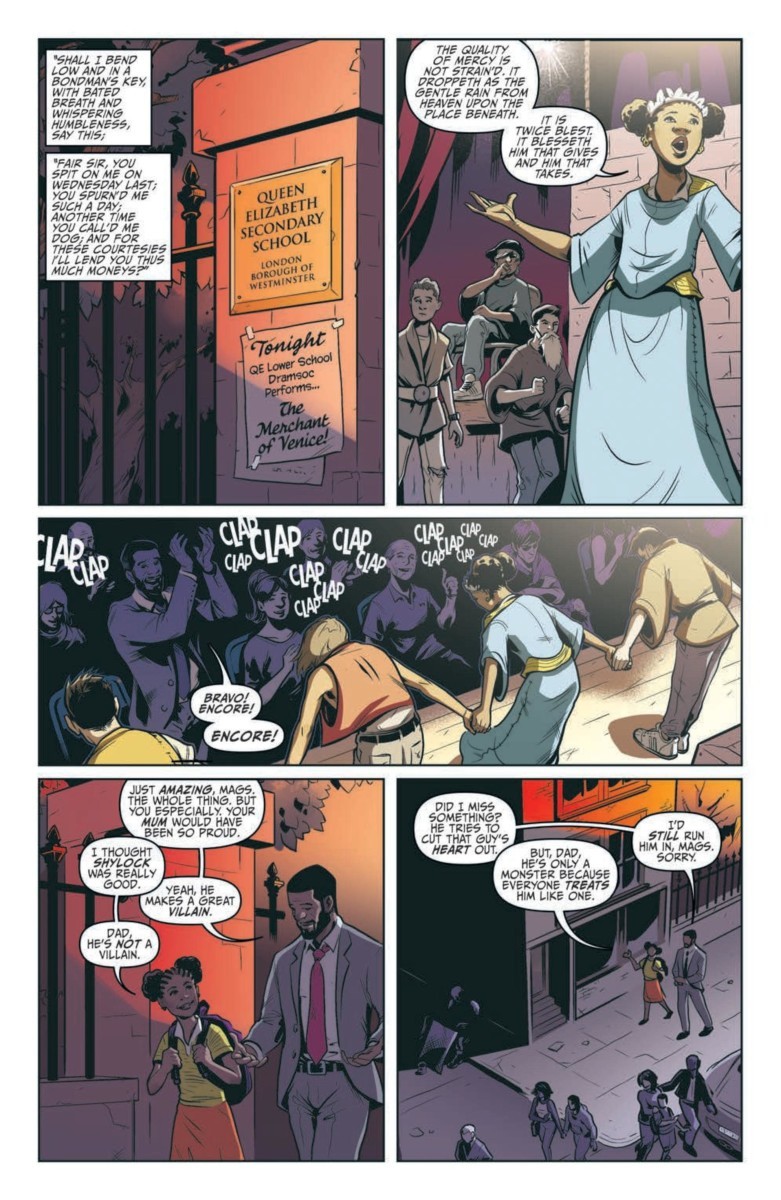 Although you have to be a little bit of a literary nerd to pick up on this reference, the character Shylock is your typical antisemitic portrayal of a Jewish moneylender. He is plotting, vengeful, and hates Christians. In the play’s resolution, the protagonist forces Shylock to convert to Christianity. The character has a history of being used in Nazi propaganda to vilify the Jewish population. However, more recent depictions of Shylock have been more sympathetic to the character. Shylock can be interpreted as a complex character, rather than just a racist caricature. Mags, unlike her father, is picking up on this nuance. She sees Shylock as a victim of his circumstances, rather than an antagonist with no motivation other than hate. Given Mags’ penchant for grace, it’s fitting that she plays Portia and is seen giving the “quality of mercy” speech.

READ: Like your demons metaphorical? Robert Kirkman’s OUTCAST uses demon possession as an allegory for addiction and abuse!

Admittedly, not every reader is going to pick up on this Shakespeare reference. However, Carey and David do provide the reader with a more explicit conversation about race in DARKNESS VISIBLE #1. After getting in the car, Aston and Mags begin to discuss what they want for dinner. Mags suggests a restaurant called “Kentucky Chicken,” but Aston turns her down citing a racist advertisement they put out. Mags implies that this doesn’t really matter but Aston tells her that it does. It’s obvious that Aston and his daughter are regularly having conversations about racism, what it looks like, and how to appropriately respond to it. This makes the conversation that happens before this dinner discussion all the more ironic.

Before getting in the car, Mags spots a demon with insect like arms begging on the sidewalk with a sign that says “NO HANDS NO JOB.” She expresses pity towards him and her father corrects her. Aston tells Mags that the demon is probably choosing to take that form just so Mags will feel bad and give him money. He warns her never to let her guard down around “those things” and “if they’re that messed up on the outside, imagine what their inside is like.” Aston assumes this particular demon chooses to look pathetic just to cheat people based on his belief that all demons are bad. 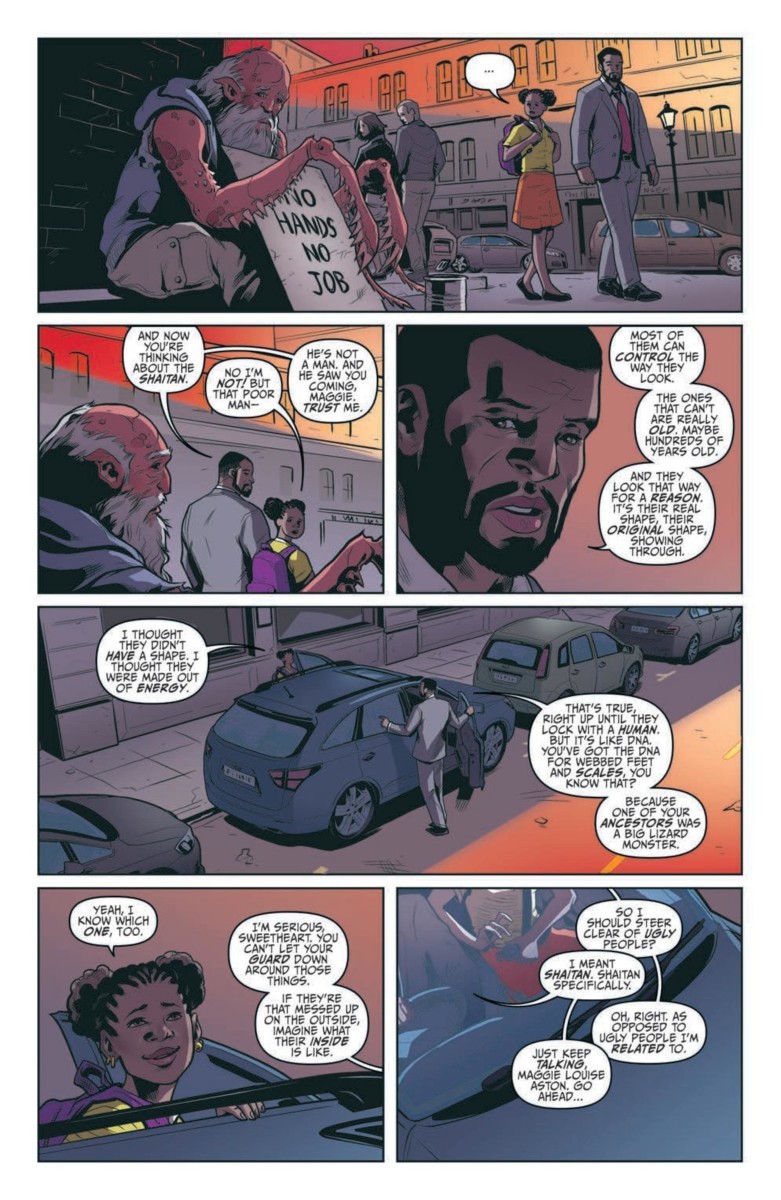 Aston’s attitude towards this beggar is extremely similar to the way Americans perceive beggars and poor people in general. A big aspect of “the American dream” is the idea that anyone can make it in the United States if they work hard enough. Unfortunately, this optimism has a flip-side. It manifests in the perspective that impoverished people need only to “pull themselves up by their bootstraps” to improve their standing. The bootstraps myth makes poor people personally responsible for their own suffering. If someone cannot escape poverty, either they’re too ignorant to know all they need is some elbow grease or they’re okay with their situation.

Directly related to the bootstraps myth is the concept of the “welfare queen,” a single mother who is gaming the welfare system so she doesn’t have to work. The myth of the welfare queen takes a step further than the bootstraps myth, directly linking poor people to criminality. Poor people are then not only responsible for their situation, but are also taking advantage of hard-working people. With over a quarter of both the African-American and Latino population living below the poverty line, these myths shape not only our perceptions of the poor but also form racial stereotypes.

READ: Want to know more about racism in fictional media? Read up on misogynoir and the CW!

There is obviously some hypocrisy in Aston telling his daughter that all demons are not to be trusted while also teaching her about racism. What is truly frightening is that he expresses these views as a member of London’s law enforcement.  I don’t know if it’s possible for him to judge emergency situations without automatically acting on these prejudices. Again, this parallels the situation between law enforcement and people of color in the United States. All people are prejudice, whether or not they proudly express those beliefs. It remains to be seen if law enforcement can unlearn those beliefs and wield the power they’ve been given with greater equity.

Again, I can only speculate that the demons and the people they possess in DARKNESS VISIBLE are not pure unadulterated evil. Like Shylock, I assume they are making the best of the situations in which they find themselves. Still, it’s totally possible that DARKNESS VISIBLE #2 will completely dismiss everything I just laid out. However, judging how DARKNESS VISIBLE #1 ends, I think it’s reasonable to say that Aston’s perspective on the demons is about to change drastically. Like NIGHT OF THE LIVING DEAD and GET OUT, I hope that the creators of DARKNESS VISIBLE continue to use horror as a medium to discuss race. Horror as a genre is an exploration of one of the basest emotions: fear. It’s time that the medium begins to intelligently explore racism and the fear that it inflicts daily on people of color.