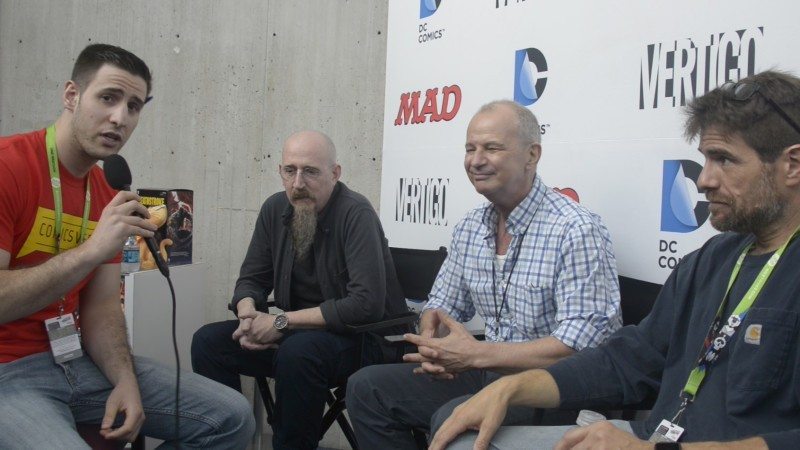 Probably one of the biggest interviews and maybe one of the most important that I had at NYCC 2015 was with the DARK KNIGHT III: THE MASTER RACE’s team of Klaus Janson, Andy Kubert and Brian Azzarello, minus Frank Miller, the original creator himself.

This interview is huge for several reasons. First, the original Dark Knight series is arguably the most iconic Batman comics. Some also consider it one of the greatest series in the history of comics. The opportunity to interview the creators of this influential series felt significant. Also, this could easily be DC Comics’ biggest comic book in 2015. Depending on its success, DARK KNIGHT III: THE MASTER RACE could snag the title of the most popular series for years to come. This is the Dark Knight we are talking about, written and drawn by a team of comic legends. Finally, people refer to it as the most anticipated Batman and DC Comics titles to come out.

HEAR: Fan of the whole Batman Bat-Family? Our podcast on BATGIRL OF BURNSIDE gets pretty deep!

With the DARK KNIGHT III: THE MASTER RACE’s recent release, as well as the announcement for a fourth installment of the series, this interview sheds some light on how much each member contributed to the scripting and artwork. Additionally, Frank Miller gave great input on the series and allowed for creative freedom for the rest of the team. It’s an incredible look at what this talented group put together for such an influential work of comic history.

READ: Check out our review of The Dark Knight 3: The Master Race #3!

I appreciate the time Janson, Kubert, and Azzarello provided the ComicsVerse team. In addition, the first issue of DARK KNIGHT III: THE MASTER RACE gave me much joy. I’m looking forward to what these legends put together. No doubt they won’t disappoint. In conclusion, thank you to DC for all of the interviews you provided ComicsVerse and me, it greatly is appreciated.