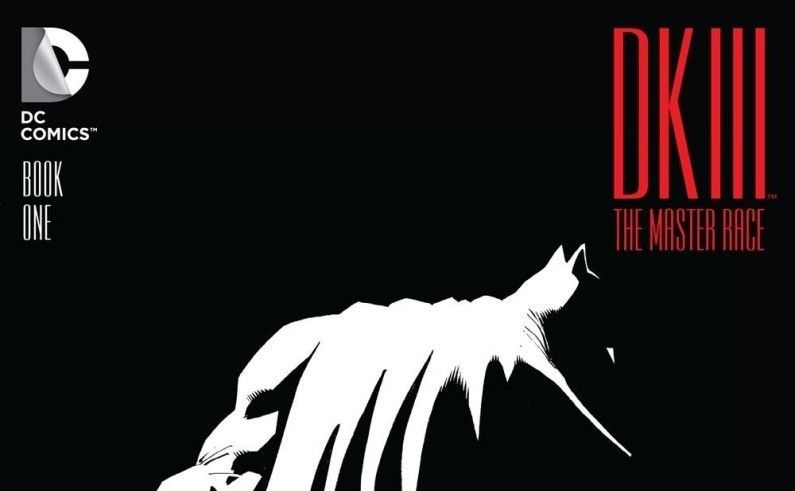 THE DARK KNIGHT RETURNS is one of the greatest Batman stories ever told and, personally, my favorite. As told by Frank Miller in 1986, it was a modern, angry Batman putting back on the cowl in response to the world around him. The sequel, THE DARK KNIGHT STRIKES AGAIN was released in 2001 and was read by many to be Miller’s reaction to 9/11. While not as critically acclaimed as the original, DK II gave a more in-depth look at the world outside of Gotham and the status of superheroes in this world. Yet, what happens to all of those characters? Luckily, our questions will be answered in DARK KNIGHT III: THE MASTER RACE by Frank Miller and Brian Azzarello with art by Adam Kubert and colors by Klaus Janson. Is the book as iconic as the original? Does the creative team switch take away from the trilogy’s overall narrative? Let’s check it out in our DARK KNIGHT III: THE MASTER RACE review!

Internet, it’s finally here, the comic book of 2015. Dark Knight III The Master Race #1 is the first time Miller has returned to write Batman since ALL STAR BATMAN AND ROBIN THE BOY WONDER went on permanent hiatus. Yet with the media’s continuing spotlight on the series, Miller has continued to distance himself from the series. He refers to it as Brian Azzarello’s take on The Dark Knight, and this couldn’t be any truer. Miller’s presence is sorely missed throughout the issue. With Andy Kubert on pencils, Miller’s signature storytelling is absent in the story beyond a mini-comic featuring the Atom tucked into the middle of the issue. That’s not to say it’s a bad issue at all, in fact, it’s some of the best work any of the participating creators have ever published. It’s just not the story that DC Comics has been so heavily promoting. 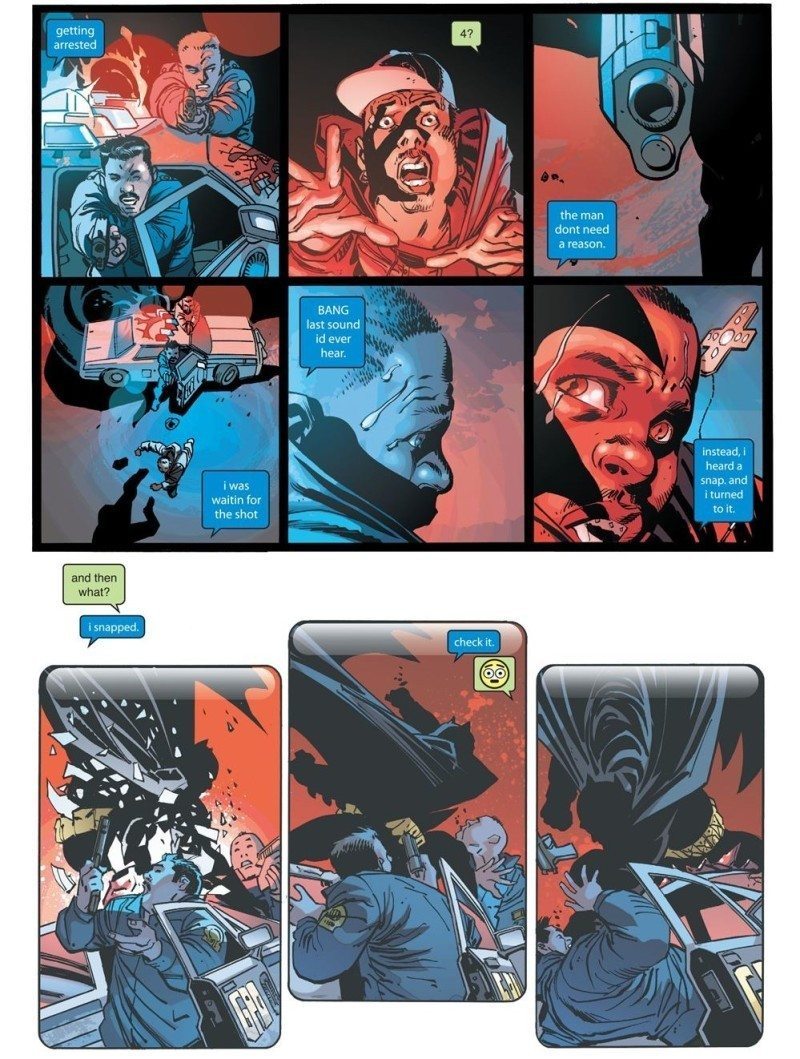 The issue begins with a panel spotlight on the Batsuit. A colony of bats explode onto the page in the second panel and then in the third panel, the glass has been shattered, and someone has stolen the iconic cowl. The narrative begins with a text message conversation between two young people, we know one is a man of color as it’s his story that is told through text messages and visuals. This is also the point where we are introduced to the antagonists of this issue, the police. The cops chase down the black teenager with a clear intent to kill before being stopped by Batman, the first appearance of the caped crusader in years. We then get a throwback to the recurring DK narrative device of using television reporters to provide commentary on not only the return of Batman but also on police brutality as well. It was ery enjoyable to see media characters like Al Sharpton, Jon Stewart, and Bill O’Reilly have accurate portrayals in a Batman book, I was a big fan.

READ: Want to learn more about THE DARK KNIGHT RETURNS? Read our analysis of the iconic comic here!

We then see a battle between Wonder Woman and a minotaur as the Amazon queen rescues a tribe of people from the mythical creature’s attack. Her monologue was a thought-provoking look on super-heroes and their place in the world of men. They are looked to in times of need as humanity’s saviors from death yet with every hundred acts of heroism there are a hundred more claims that heroes are a threat and will eventually bring death to humanity. After the minotaur’s defeat, we see that Wonder Woman held her baby son on her back the whole time as she was on her way to train with her daughter, Lara. Lara, also the daughter of Superman, is visiting the Fortress of Solitude to speak with the frozen body of her father while venting frustrations about her inability to find her place in this world and how the greatest hero was stopped by mere mortals. 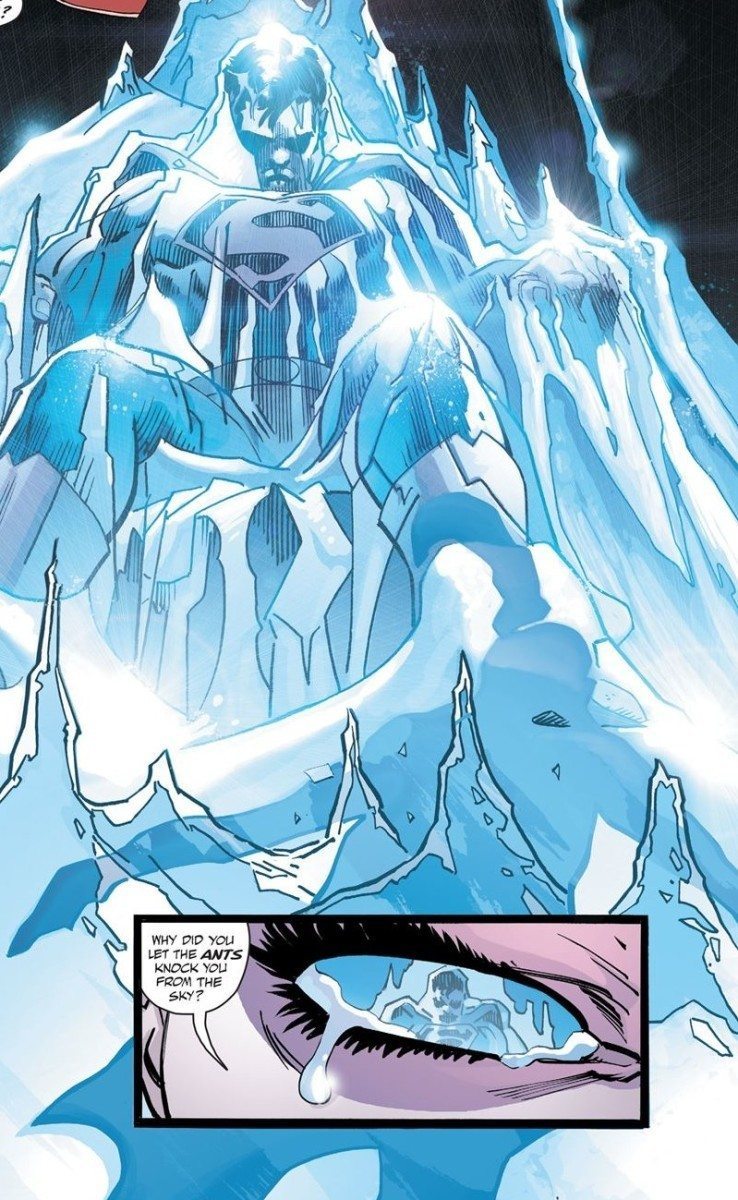 The issue then transitions to Commissioner Yindel sitting by the Bat-signal lamenting on the corruption of herself and the police force she leads. The story transitions to Batman trying to evade the police because the signal was an ambush meant to trap the vigilante, and it was successful. What follows is a scene of police brutality as they savagely beat Batman with billy clubs after shooting the hero in the face. Our hero gets up and eventually takes down the assailants before collapsing in front of a questioning Yindel. As Batman’s mask is removed by Yindel, we see a bloody Carrie Kelly wearing the cowl and her final words are “Bruce Wayne is dead”.

Before going right into my analysis and opinions, I’d like to briefly cover the Atom mini-comic by Miller. After an extremely negative criticism over the cover’s portrayal of Superman, many readers believed that Miller’s artistic talents were diminished with age and sickness. The world couldn’t have been more wrong. The inside art features some of the best Miller pencils I have ever seen, and Miller has a wonderful take on Atom in a post DK II world. The comic starts as a miniaturized Atom fights his pet lizards and reflects on how he got over his divorce. Looking at himself in the mirror and comparing himself to Batman or Superman and understanding his place in the world. Atom’s monologue gives a good look into the lives of the DK universe superheroes. Heroes like Atom, Flash, and Green Lantern had lives outside of the masks whereas Batman and Superman were the primary identities and their secret identities were the masks. The comic then ends with Lara approaching Atom with the Bottled City of Kandor and a request to help regain their natural form. This particular scene hints the Master Race that Batman will eventually combat is an entire clan of Kryptonians. 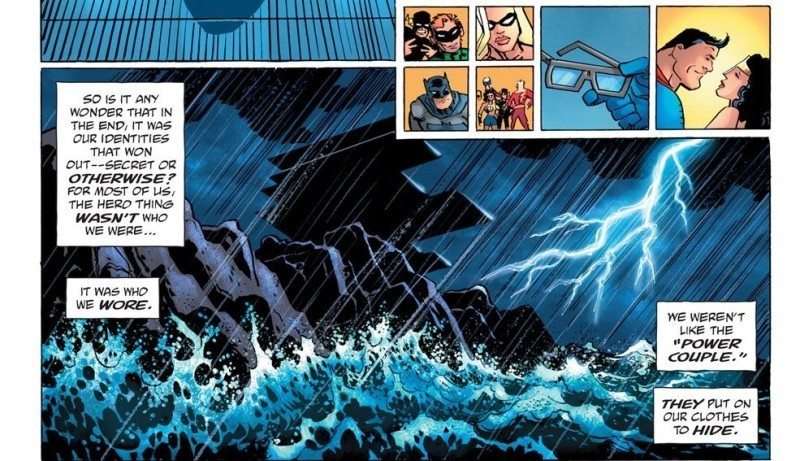 My experience with Azzarello writing Batman is minimal, the one issue being BATMAN 44 that was released in September of this year. It is a very similar issue in tone and also deals with the oppression of young minorities in Gotham City, but that’s getting off topic. What I am trying to say is that beyond the antagonist being the police, I feel like this could be a regular issue of BATMAN or DETECTIVE COMICS being published monthly. It reads more like a fan fiction of this world instead of a major storyline in the saga.

READ: Need more Batman? Check out our review of Snyder and Azzarello’s BATMAN #44!

Andy Kubert pencils the crowning achievement of his career in this issue and, as skeptical as I was about him being the artist, he fits perfectly into the DK world as an artist. I do not believe there is a single artist other than Kubert that I would rather see drawing this book right now. Klaus Janson brings life to his illustrations in a way that no other inker has prior, and I hope they continue to collaborate after this series ends. The single problem is that, as stated earlier, this is merely Azzarello’s take on the Dark Knight, it lacks the feeling of excitement and energy that Miller brings to Batman in both story and art.

Again, that’s not to say I didn’t enjoy this issue. I spent six dollars on this book and it was worth every damn penny. The use of texting as a narrative device to bring the DK universe into modern times is sheer brilliance, the police brutality scenes hit home, and the panels where Batman is on the ground being beaten are hard to swallow. The reveal that Carrie Kelly is under the mask and that they are brutally beating a woman also made it all the more disturbing to me. That’s what I like from Azzarello though, he tests his readers with topics that are hard to chew and it fits perfectly into the world. This is not the story that DC Comics was promising, but I have to say it did exceed my expectations. The team of Azzarello and Kubert is one to watch, and I can’t wait to see what is coming next in this series.