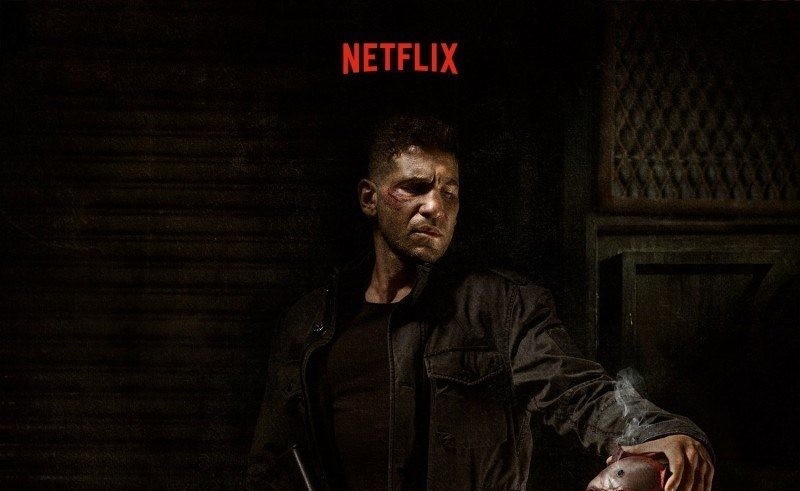 After the overwhelming success of DAREDEVIL Season 1, there was clearly a huge demand for more adventures from Hell’s Kitchen. After (what felt like) a long wait, DAREDEVIL Season 2 has arrived, riding on a wave of goodwill, enthusiasm and excitement for our horned hero. Trailers abound teased us with the arrival of new characters: Elektra and the Punisher. After its arrival on the 18th of March, Netflix became a second home to me as I once again dove into the world of Hell’s Kitchen waiting to experience the thrills, spectacle, and beautiful violence of the show.

Sadly, I was left feeling slightly let down.

Now, this is not a negative review. It is in a lot of ways a spectacular show. There were things I loved and adored. There were also things I found strained, confusing and lacking focus. This threw me as the first season was, for me, pitch perfect: one of the most amazing pieces of television I had ever witnessed and possibly Marvel’s greatest achievement in TV and film. Were my expectations too high? Did I just not understand some of the story?

Let’s break it down in a little detail first. Warning, there are spoilers here. If you haven’t watched it, please do yourself a favor and do so. If you have watched it, indulge me as I go through its strengths and failings.

READ: Need a refresher course on DAREDEVIL S1? Check out our review and analysis here!

The more things change, the more things stay the same. Season 2 opens after the defeat of Wilson Fisk. The firm of Nelson and Murdock has received fame and recognition for its part in his downfall, but financial success still eludes them. Matthew’s alter ego Daredevil is praised as a hero on the streets. His relationship with Karen starts to bloom. However, the rise of a new more lethal vigilante puts a question mark over the role the costumed superhero plays in society. Do they more harm than good? Should people really take the law into their own hands? Not only does Matthew have to contend with this new gun-toting one man army but also an ex-girlfriend who re-enters his life and complicates it in ways he could not have foreseen. A war for the very life of New York is about to take place. He needs to prepare. Yet his responsibilities as a lawyer pull at him as he must also get ready for the trial of the decade.

Probably the best thing about this season is the introduction and storyline of the Punisher. While there is a build up to his first reveal on screen, it happens pretty quickly. He’s a gun-toting menace that hides in the shadows and  the rooftops, ready to pull the trigger at a moment’s notice. Jon Bernthal is absolutely pitch perfect as Frank Castle. The real fear is that the character could just be a one-note interpretation, a fixated vigilante with only vengeance on his mind, but the script and Bernthal brings huge depth to Frank. He neither loves nor hates killing, but it must be done. Behind it all is a broken heart and the family that was stolen from him. There are exceptional moments, especially in Episode 3, where Frank reminisces about his family. They are hugely emotional scenes in their intimacy. Bernthal delivers a performance that is heartfelt yet doesn’t go into saccharine territory. Whether you agree with them or not, you understand his motivations. He oozes presence in every scene and commands your attention even when all he is doing is standing there.

The story the scriptwriters weave around him is strong from his emergence as a force of violence, through his trial to his final acceptance of taking up the Punisher mantle. His last scene where he wears the skull on his chest is small, subtle and brilliant. It brought a glorious conclusion to his story and gave us the best screen Punisher we’ve ever had. Plus, he gets his own version of DAREDEVIL’s famous hallway action scene from Season 1. Locked in a prison block with only a makeshift knife as a weapon, he rages his way through the inmates, tearing and rendering them asunder. It is shocking, horrific, bloody and glorious.

READ: Hungry for more Marvel/Netflix superheroes? We check out our look at JESSICA JONES here!

The performances from every actor were strong. Charlie Cox is the perfect Matt Murdock/Daredevil, and you believe that’s him jumping across rooftops and kicking ass. That is in part due to him doing a lot of his own stunts, which just shows how committed to the part he is. While I found I enjoyed him more out of costume than in (nothing to do with his performance), I thought it was an inspired choice that his Daredevil voice was very low key, almost a whisper. It could have easily been another booming voice a la Batman, but instead, the voice of Daredevil is like the hero himself. Silent, deadly, coming as if from nowhere. 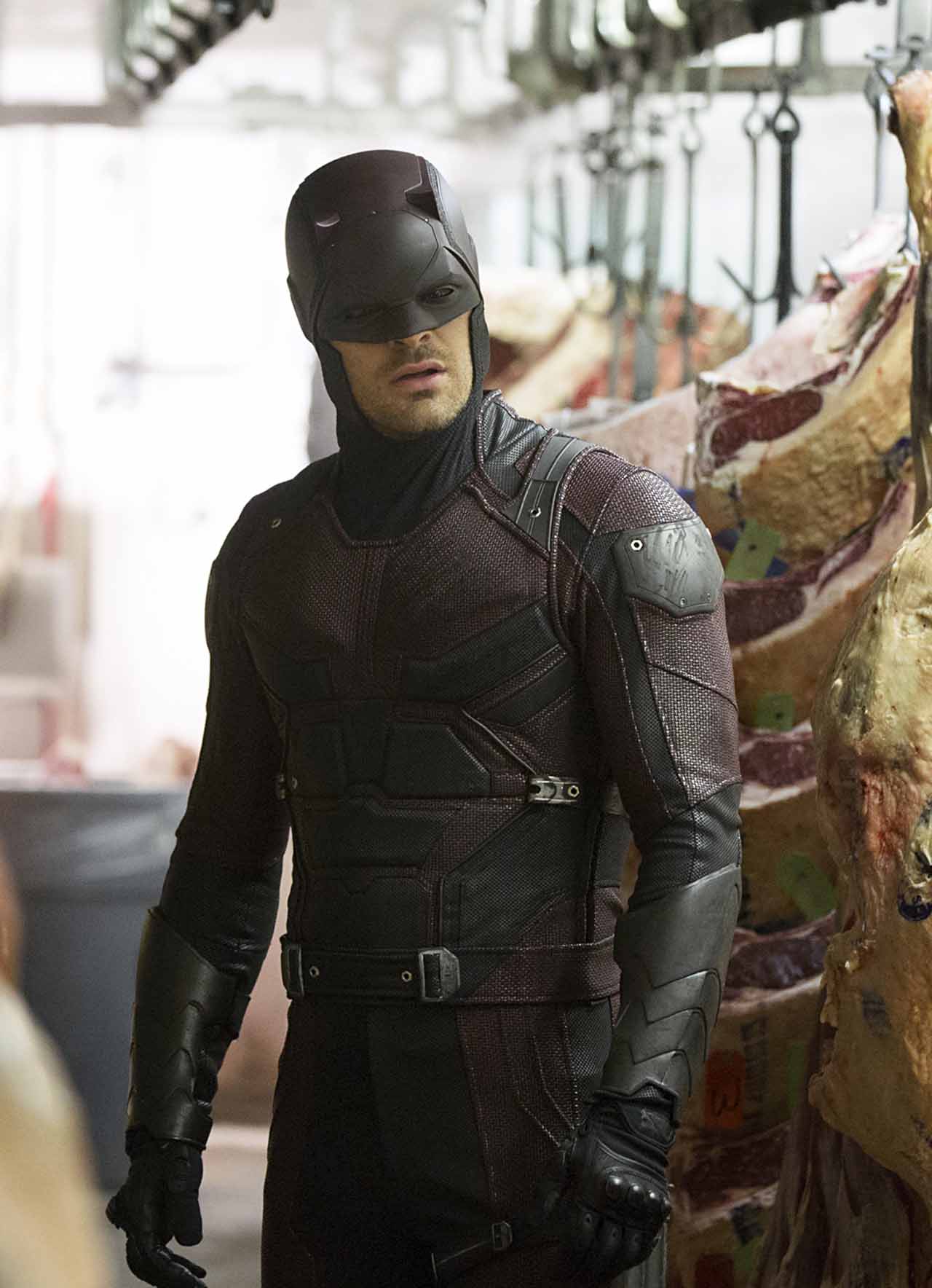 Elden Henson as Foggy Nelson continues to be the beating heart of the show: lovable, loyal, and funny. My one fear was that he wouldn’t have enough to do with so much going on, but during the trial of Frank Castle, Foggy steps up to the plate and shows us what a fantastic lawyer he is.

Karen Page (Deborah Ann Woll) is put through an emotional wringer this season. Her story slowly starts to link with Frank’s and the surprising friendship that comes out of that is both honest and endearing. Having murdered Wesley in Season 1, it’s still a huge burden she carries. While she doesn’t confess it to anyone here, it clearly weighs on her. She tries to rationalize Frank’s deeds in some way to balance out her own, and it’s fascinating to watch. Her particular character arc is strong, and where she ends up at the end of the series feels right.

For me the strongest female character and performance though has to go to Rosario Dawson as the Night Nurse. While she is only in a few episodes, she feels the most fully formed of the women: strong and gusty, but never forced. She feels real, and her interactions with the main characters are a lot of fun.

READ: Love the Punisher? Check out his first appearance in the comics here!

(Spoilers ahead!) In the age of Internet spoilers and knowing who’s going to be in the show, it was a huge surprise for me to see Wilson Fisk rise his bald head at the end of Episode 8. I laughed out loud with joy at his appearance, not expecting to see him again but delighted at this reveal.  His performance and presence from Season 1 was sorely missed this season. Vincent D’Onofrio’s portrayal of the Kingpin of crime has to be the most riveting and nuanced performance of any major villain in a long time. He brings a lot of needed weight to the show and opens up a lot of potential plot threads for future season arcs going forward. For me, Episode 9, which was Castle and Fisk centric, was the strongest episode of the entire series.

Okay so maybe bad might be the wrong word to use here, but there were things that stood out as jarring and just really didn’t work for me in this season.

The story: there was absolutely amazing scriptwriting going on this season with astounding revelations and nice nods to the larger MCU. Frank Castle’s story and payoff were handled superbly well. However, it struggled with the rest of the story. The clashes between Foggy, Matt and Karen were compelling, but it all seemed like it was veering wildly with no specific goal in place. The big bads this season were Nobu, a minor villain from Season 1 (back from the dead and leading the Hand), and the Blacksmith, someone who played a major role in the murder of the Castle family.

The issue here is that while we have the hard-fighting Daredevil throughout this season, it’s never clear what the threat is. The Hand need Elektra for something. We don’t what that thing is, and what we get is scene upon scene of Daredevil fighting the ninjas of the Hand. While the choreography is excellent, the ninja fights get old very quickly. There is never any real sense of danger. We are informed by Stick that New York is in great peril, but we are never told how or why. The stakes seem very muddled. Even in the Blacksmith’s case, his name is revealed very late in the game. The mystery of who he really is holds very little intrigue when the only person of note left is a character played by Clancy Brown. 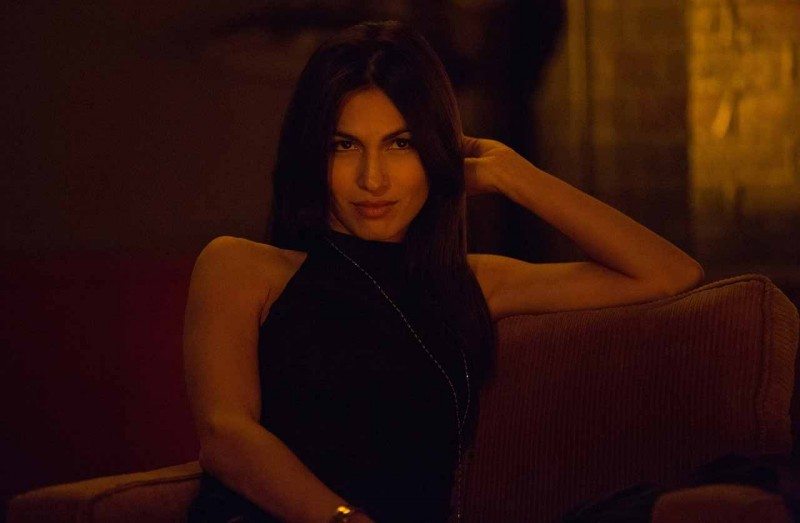 Sadly, I found Élodie Yung as Elektra wanting. Apart from the fact that her accent reminded me of Emily from FRIENDS, the character at times was irritating and weirdly smug. I must admit I wouldn’t be the biggest expert on Elektra, but I found I was underwhelmed by her performance; a cocky petulant child that I didn’t believe was struggling with the killer inside.

LISTEN: We discuss the comics romances of the ages, including Daredevil and Elektra in our podcast about comic book couples!

The revelation that she was what the Hand was after all along also felt forced and ultimately wasted as a few “wise” words from Matt seemed to easily sway her from the Hand’s grip. Ultimately, the revelation changed nothing, with Elektra and Daredevil still fighting the Hand come the season finale. By this stage, we have already seen a lot of ninja fights where all hope seems lost before a last minute reprieve. Here it is almost no different except that Elektra falls, accidentally killed by the Hand that wanted her to lead them. Her death carries no emotional impact, playing out in a series of forced dying whispers we have seen again and again on other series.

The series felt unfinished when it came to the main, non-Punisher plot, with no resolution coming for the Hand story. They are still planning something…but we’re not sure what. I would imagine that would be what Season 3 could wrap up for us (hopefully, once it’s greenlit).

DAREDEVIL Season 2 does have faults that hold it back from the lofty heights of Season 1, and there is a severe lack of any major threat in the series. However, there are also some amazing character performances, some of the scriptwriting is superb, and it has the best introduction to a major Marvel anti-hero we’ve seen in a while. Despite the issues I have with the series, its strengths far outweigh its weaknesses and make it a great piece of television. There are moments of pure comic book joy to be found in this season with a slow, careful introduction to the rest of the Marvel Universe. Welcome to Hell’s Kitchen. Prepare to get bloody and bruised.