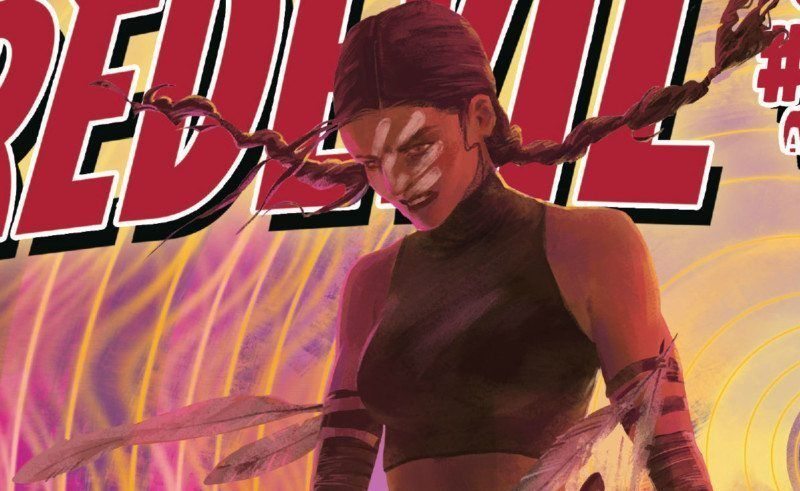 The DAREDEVIL annual is a work of art, much like the main series. I have to admit I was a little worried when I heard that Ron Garney and Matt Milla were not working on the art, but I was quickly blown away by the sheer amount of talent in this book. There are two stories in this annual and they each use previous themes of the recent issues of DAREDEVIL to add to the storytelling. Above all else the new run of DAREDEVIL has become known for its use of color in storytelling. Monochromatic scenes set the tone of a city ruled by crime, and we are able to “see” the world through Daredevil’s eyes in scenes colored as a thermal map of environments and enemies.

In the first story, Echo is at a concert when suddenly everyone around her is knocked out and turned into sound wave zombies, infecting anyone who hears their noise and turning innocent people into one of them. She deduces that she wasn’t zombified because she’s deaf, and goes to Daredevil for help. She protects his ears from the effects of the sound zombies by blasting Prince (RIP) on headphones for him. Daredevil realizes that this sinister work is the signature of the villain Klaw. Together, they go to a radio station to try and create a tune that will cancel out Klaw’s sonic attacks.

READ: Check out our review of Hornhead’s first arc in his new series!

First off, I love the idea of a sound-themed villain for a deaf character as much as I love gorgeous art in a book about a blind character. It’s one of the things that drew me to the character in the first place–everything he does is made more amazing because he’s always overcoming his disability. Some might think the irony is beautiful in a way, and I do too. I also think there’s a little part of me that thinks that this irony is hilarious. That said, every single panel of this issue looked like something you would find in an Impressionist museum. The lines sketched into the figures made you aware of the artist’s presence, but you welcome it. I thought of this scratchy line work as a way of seeing Daredevil’s own distorted but complete view of his surroundings. My favorite detail was the slinky yellow depiction of the infectious tune. 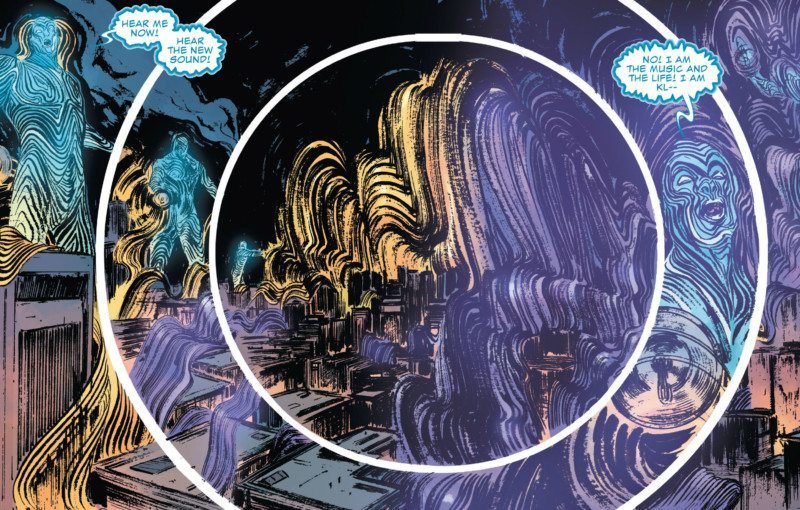 The way that panels were arranged was a brilliant artistic move and it really helped tell the story as well, such as when Echo is trying to make an audio negative version of Klaw’s noise. The panel takes on the shape of a sound wave and you can almost hear the sound coming out of the page. 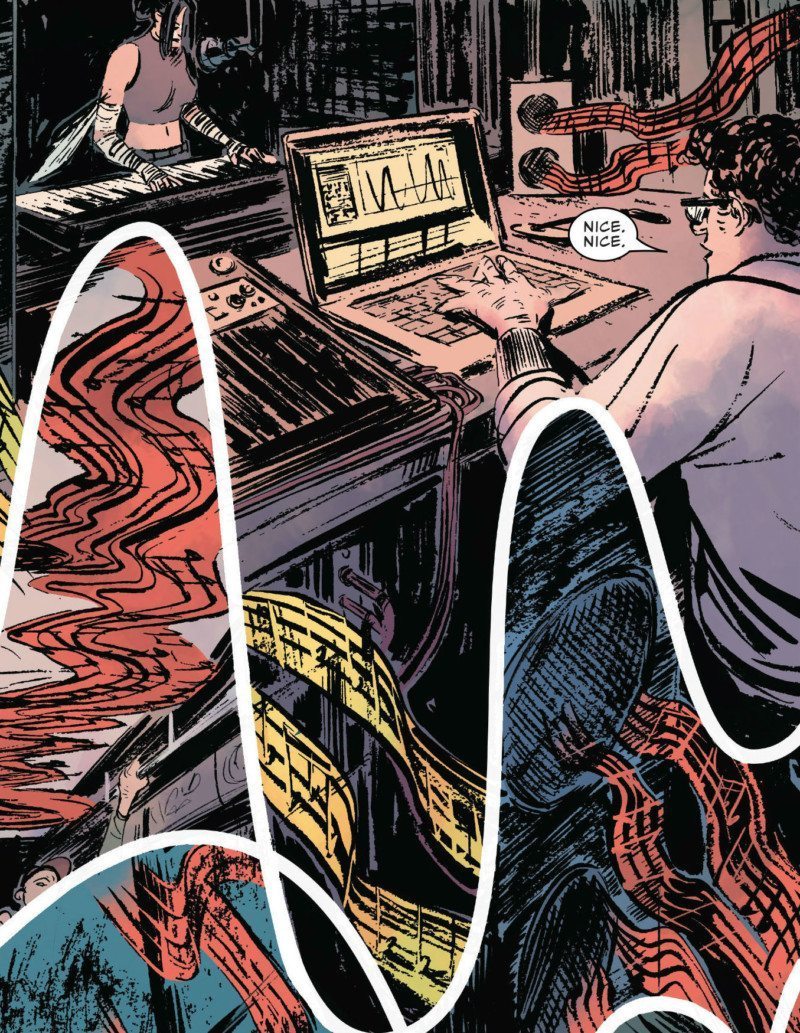 Artistically, this story continued the current DAREDEVIL tradition of the reliance on color to tell a story. We see the yellow tone and Echo’s negative red tone trying to cancel each other out in a beautiful and moving way. I’ve read a lot of Daredevil, and this annual/current run is on par with the best of the best–I’d venture to say that it approaches the level of Frank Miller’s famous take on the character in terms of storytelling ability. This issue recognized that and paid homage to that classic era.

The next story focused on Melvin Potter, aka Gladiator. It was a great tribute to the stylized crime writing of DAREDEVIL in the 70’s during Frank Miller’s run. Potter becomes obsessed with taking revenge on the mobsters who killed his wife and children and does so bloody-rampage-style. Daredevil, always the good Catholic, doesn’t approve of such violence and tries to stop him. This story uses the current run’s signature-monochromatic scenes with flashes of dramatic color which, in this case, is always red. 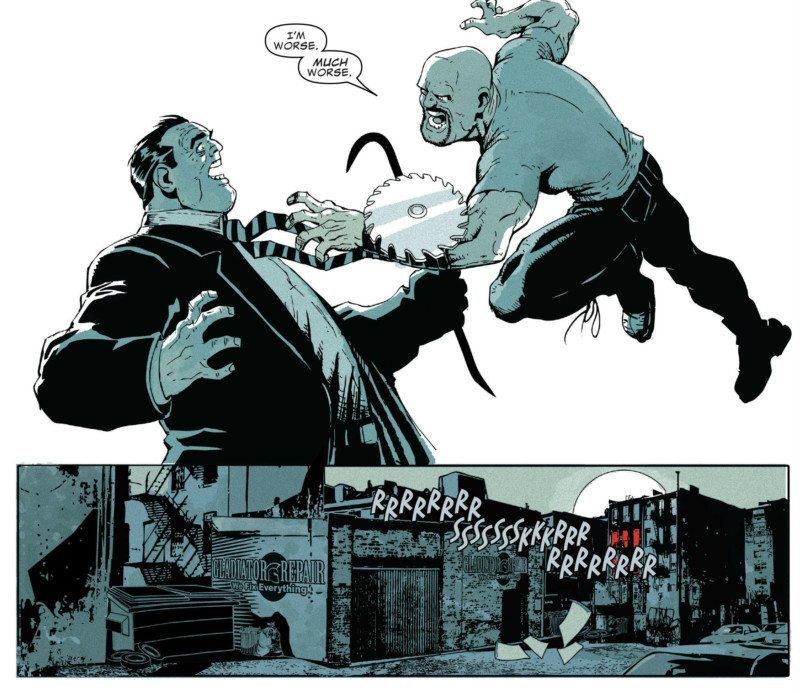 Another great callback to past storytelling techniques is when Daredevil fights Potter. Like in Frank Miller’s run, Daredevil’s movements are illustrated by multiple images of him leaping about, creating a dynamic sense of motion and flow. 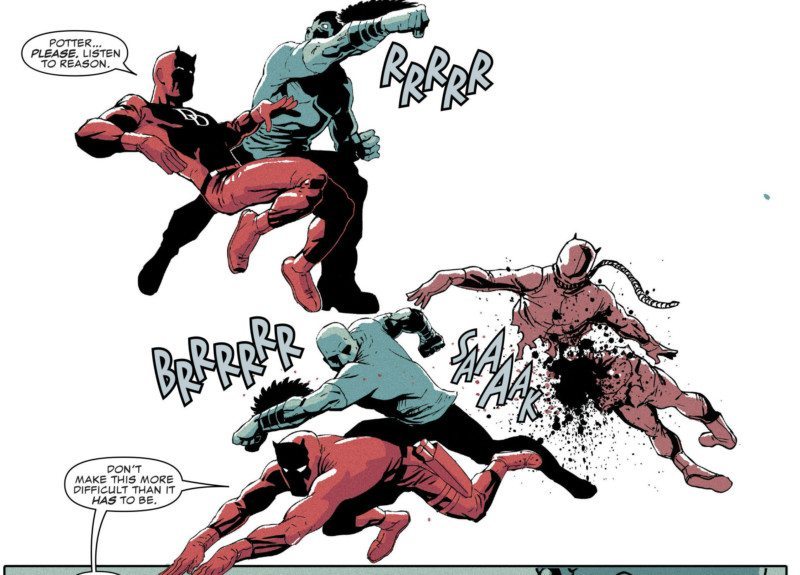 READ: Love Melvin Potter aka Gladiator? Check out our character analysis of the famous villain!

I think this story also did a good job of conveying Daredevil’s mentality. While he has become more intense and aggressive in recent issues (reflected in his choice to don a black costume), he does not want to beat Melvin senseless like he would other criminals because Melvin is clearly not all there mentally. Daredevil realizes this and deduces that legally speaking, he’s not fully responsible for his actions. It’s heartbreaking to see Daredevil dodge attacks from such a disturbed, vengeful man.

READ: Interested in the art of DAREDEVIL? Check out our color theory analysis of the book’s art through the years!

Above all else, this annual is a great example of what all annuals should strive to be–a few uncomplicated stories told using art you would not see anywhere else. But that’s also the strength of the regular run of this comic. The writing works as a springboard for the art, providing a sturdy yet flexible groundwork for it to really take off and dazzle the reader. It’s made for some of the best DAREDEVIL writing in recent memory, and this annual shows that the artistic team behind this title is right where they need to be.