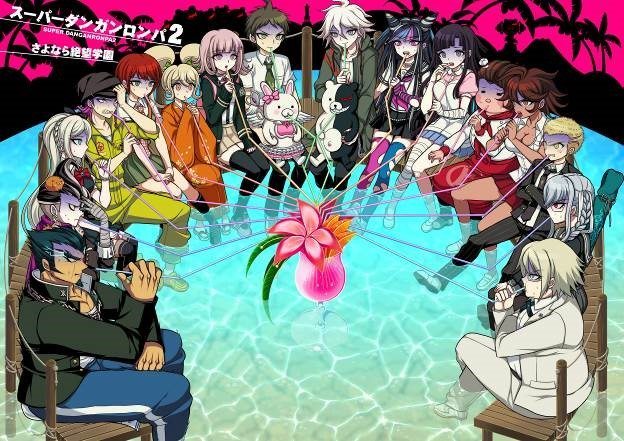 There are few video games that match the absurd, stylized storytelling of DANGANRONPA 2: GOODBYE DESPAIR. If you’ve never heard of DANGANRONPA, it’s hard to describe exactly what it’s like. Imagine if THE HUNGER GAMES was co-directed by Quentin Tarantino and Wes Anderson. Put that into a PROFESSOR LAYTON-style game, and you have the DANGANRONPA series in a nutshell. DANGANRONPA 2: GOODBYE DESPAIR is an engaging narrative mystery adventure, with many ridiculously humorous and dark elements. By pairing bright, stand-out colors with dark and grim actions, the sequel game surpasses the original and becomes phenomenal in it’s own right. GOODBYE DESPAIR builds off its predecessor with these contrasting elements, and becomes a wonderful, colorful bloodbath.

The two DANGANRONPA games have a very similar premise. In each, the player is one of sixteen students held captive by an evil teddy bear named Monokuma. Monokuma then forces the students to kill each other in order to escape. Once a student turns up dead, the remaining students then hold a trial to deduce who the murderer is. The mysteries build off of each other, as the main character has to solve all of the murders while trying to escape. Each of the DANGANRONPA games has a cast of outlandish caricatures of students, each with different strengths. They even have titles associated with their talents, like “Super High School Level Baseball Player” or “Super High School Level Gamer.” Both games in the DANGANRONPA franchise have the same basic formula, but DANGANRONPA 2 takes the premise to new heights.

READ: How is darkness present in Pokémon games? Read more about the death-infused Nuzlocke Challenge here!

The original game was based in a school, and had relatively normal characters. However, the sequel, which takes place  on a tropical island, gives the second game a much more brightly colored environment and takes characters to exaggerated extremes. There are still some normal character types present, like “Gymnast” or “Gamer”, but GOODBYE DESPAIR also has more insane characters like Gundham Tanaka, the “Breeder,” or Ibuki Mioda, the “Light Music Club Musician.” The second game also introduces another stuffed animal character besides Monokuma—as if the teddy bear wasn’t inducing enough nightmares on his own. As far as plot goes, DANGANRONPA 2: GOODBYE DESPAIR has far more absurd elements introduced than its predecessor. One student becomes a robot, the island has its own theme park, and the outlandish executions only become crazier. Despite these bright colors and exaggerated characters, the sequel loses none of the bloody, biting imagery present in the first game.

As crazy and colorful as the world of DANGANRONPA 2 may be, it’s gruesome as well. The player can’t ever forget that he—or any of his friends—could die without a moment’s notice. The colorful backdrops are silly and fun, until you see a teenager’s corpse propped against it. Even the blood shown is hot-pink, perhaps as a means of distracting or disorienting players. Aside from FIVE NIGHTS AT FREDDY’S, there’s no video game teddy bear quite as frightening as Monokuma. Plus, while the executions for murderous students are outlandish, they’re still a terrifying concept. Sure, the world these characters now live in is full of lively color. But it doesn’t change the fact that the game is a murder mystery, and there’s more than enough murder and mystery to go around.

Despite how colorfully quirky  everything is, there’s death and sadness around every turn—and it makes you far more invested in the game itself. While all the characters may be caricatures taken to hilarious extremes, they’re still people that you want to save. It’s not just about finding killers — it’s about escaping so that no one one else has to get murdered. And every time you fail to save a character, or have to execute one, no bright colors can help soften the emotional blow.

The contrast between zany color and gut-wrenching gore is what makes DANGANRONPA 2 so unlike anything else. Traditionally, when death or murder is vital to a plot of a story, the tone of the medium tends to be dark and morose. Take GAME OF THRONES, for example (either the show, the books, or the TellTale game). Death permeates that entire world, and the environments tend to reflect that. In GAME OF THRONES, you’d never find the kinds of colorful landscapes you see in DANGANRONPA 2. The reason the colorful landscapes work for DANGANRONPA is its creation of a contrast, highlighting the gravity of death in such a lively-looking world. While the two elements may seem like mismatched opposites, their simultaneous existence in the game is what creates such a unique gaming experience.

DANGANRONPA 2: GOODBYE DESPAIR is magnificent through its combination of bright, extravagant colors and  carnage-laden sadness. The game isn’t just a regular murder-mystery, it is one of the most zany and dark games to ever hit the market. It’s a stunning visual novel which takes elements of many different games and properties to make something entirely new. DANGANRONPA 2: GOODBYE DESPAIR is a game made unique in so many way, from color scheme to Monokuma himself—which is why playing it is a highly recommended and completely unforgettable experience.