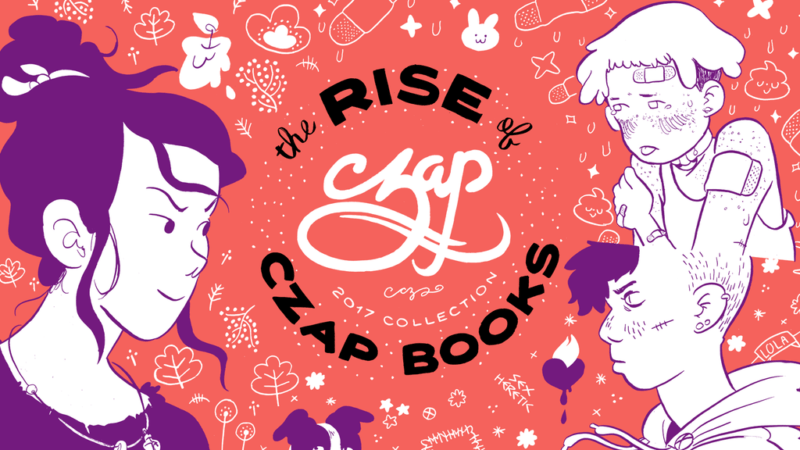 We caught up with Kevin Czap, known to some as the “Comics Mom” of Czap Books (pronounced “chapbooks”), a micropress based in Providence, Rhode Island. Czap Books is currently running a Kickstarter campaign to print three new titles: WITCHLIGHT by Jessi Zabarsky, DON’T TELL ME NOT TO WORRY (I’LL WORRY ALL I WANT) by Kelly Kwang, and EGG CRÈME #1 by Liz Suburbia. The Kickstarter is entitled “The Rise of Czap Books – The 2017 Collection,” so we got together to talk about movement that Czap Books has been seeing over the past years and what we can expect in 2017.

ComicsVerse: What, in your opinion, makes Czap Books and its titles unique?

Kevin Czap: I think it always has to come down to the artists and the work they do. What makes the titles unique is the various influences and perspectives that the artists bring to the work, making it something all their own. I’d say a few of the things that are unique about Czap Books are our embrace of different kinds of comics, and how we’re working to help amplify the voice of a certain part of this comics generation.

CV: What are some of your favorite comics?

Kevin: I’ve been pretty lucky to be a publisher of some of my favorite comics, to be honest. Looking at my shelf, I see some recent and long-time favorites, like MOOMIN by Tove Jansson, CURVEBALL by Jeremy Sorese, BEAUTY by Kerascoët, GAYLORD PHOENIX by Edie Fake, CARPET SWEEPER TALES by Julie Doucet, UNTIL IT RUNS CLEAR by Cathy G. Johnson, SEX FANTASY by Sophia Foster-Dimino, PHOENIX: RESURRECTION by Tezuka, THE YELLOW BOOK by Fumiko Takano, TINY BANGS by O Horvath, and PROBLEM SLEUTH by Andrew Hussie. This is dangerous because I can really just go on forever. I’m very glad Michael DeForge’s STICKS ANGELICA is getting collected in a book.

READ: Want more Indie comics? Look at these books that are coming out right now!

CV: How do you find authors to publish?

Kevin: I’ve been pretty active in the indie comics scene for close to a decade, and I go to as many conventions as I can. So that’s where I meet people and discover new work. Also on twitter and tumblr, but I usually want to know the artist in some capacity first.

CV: How much of a curatorial hand do you have over projects?

Kevin: I feel like I’m pretty choosy and deliberate when it comes to going forward with an artist on a project. Aside from that, I really trust each artist to follow through on their vision, and help out as much as I can.

CV: What are your non-comics influences?

Kevin: My biggest influence is music, both in the comics I make myself, and how the culture around music exists and manages itself. I often look at small punk labels for models of how to run Czap Books. Sister Polygon Records in DC is one I’ve referred to before that I think sets a good example. I love lyrics, just in general.

CV: The new content by Jessi Zabarsky, Kelly Kwang and Liz Suburbia looks spectacular! How did you “discover” them or decide to publish their work?

Kevin: Thanks! I think so too–this lineup is really a dream come true. I’ve been close friends with Liz for a long time, and we’ve been collaborating in different ways since the beginning (I built her website back in the day to house the original SACRED HEART webcomic). I met Jessi at SPACE, a convention in Columbus, OH. She was part of a group of friends who are all really great cartoonists. Something about Jessi’s work resonated with me and I’ve been kind of circling, waiting to do a big project with her ever since. She started working on WITCHLIGHT on her own, and it just seemed like the perfect opportunity to release it when it was all finished. Kelly I’ve been a fan of for not as long a time, but it’s been a few years at this point. I can’t describe what it is, there’s something about her comics that I’ve never seen before, and she’s been at the top of my secret list for years. I’m really lucky and honored that she wanted to work with Czap Books!

Kevin: I think so. Part of the Kickstarter is about making this big move to get people to notice what we’re doing. We’ve been growing steadily over the years, and we’ve built some amazingly important relationships with people all over comics. We’re at a point where we could kind of continue at that altitude forever, or use this opportunity to do better, more intentional things. The next moves are to follow-through on these three books, lay the groundwork for 2018, and to level up in terms of being a business. Also we need a better digital scale.

CV: What are cons you would recommend? Which are your favorites?

Kevin: The Toronto Comic Arts Festival continues to be one of my favorite times of the year – I particularly like how global their sense of comics is. Small Press Expo in Maryland is also tons of fun, and is close to my hometown. CAKE in Chicago is lovely, and RIPE here in Providence has been a really special show, combining the best parts of a zine fest with a comics show. Genghis Con in Cleveland is dear to my heart.

CV: For those of us who are able to attend, what can we expect to see at your shows?

Kevin: We put out two really amazing books this past year – BUG BOYS by Laura Knetzger and ÚLCERA by Puiupo and Adonis Pantazopoulos – so the shows are largely about getting those in front of people. We also co-publish a series of fine-art fan-comics called LEY LINE with Grindstone Comics. We’re halfway through our current schedule, and we’ll have the 3rd of 4 at SPX (coincidentally, it’s one I made, about crying and bodies). I do hope I get to meet a lot of the people who supported this Kickstarter, so everyone please come say hey!

Take a look for yourself at the Kickstarter page, and consider supporting this groundbreaking project. Here’s to seeing a lot more of Czap Books in 2017 and in the following years.