CYBORG #1 continues where the Rebirth issue left off, meaning Vic Stone is still questioning whether or not he has a soul and it’s affecting his relationship with his father. After taking down a couple of robbers, Cyborg heads back to S.T.A.R. labs and, as expected, the interaction between him and his dad is tense. In order to cheer Vic up, Sarah takes him out for ice cream and jazz. While all of this is going on, Cyborg’s mysterious stalker activates Kilg%re, a robot seemingly inspired by the movie Predator, for the second phase of his plan.

READ: Check out our thoughts on the recent JUSTICE LEAGUE trailer!

The characterization in CYBORG #1 is fantastic, and Vic’s relationship with Sarah is one of the highlights. The two share a lot of cute moments together that will hopefully build up to something more. However, one of the best moments (and also the most heartbreaking), is the scene where Vic poses with two young fans. When the one boy asks Cyborg if Sarah is his girlfriend, the other one says, “He’s a machine. He don’t feel love ’cause he don’t have a heart.” In this moment, one of Vic’s biggest fears is being reinforced, and Pelletier does a good job of subtly conveying Vic’s inner turmoil through his facial expressions. 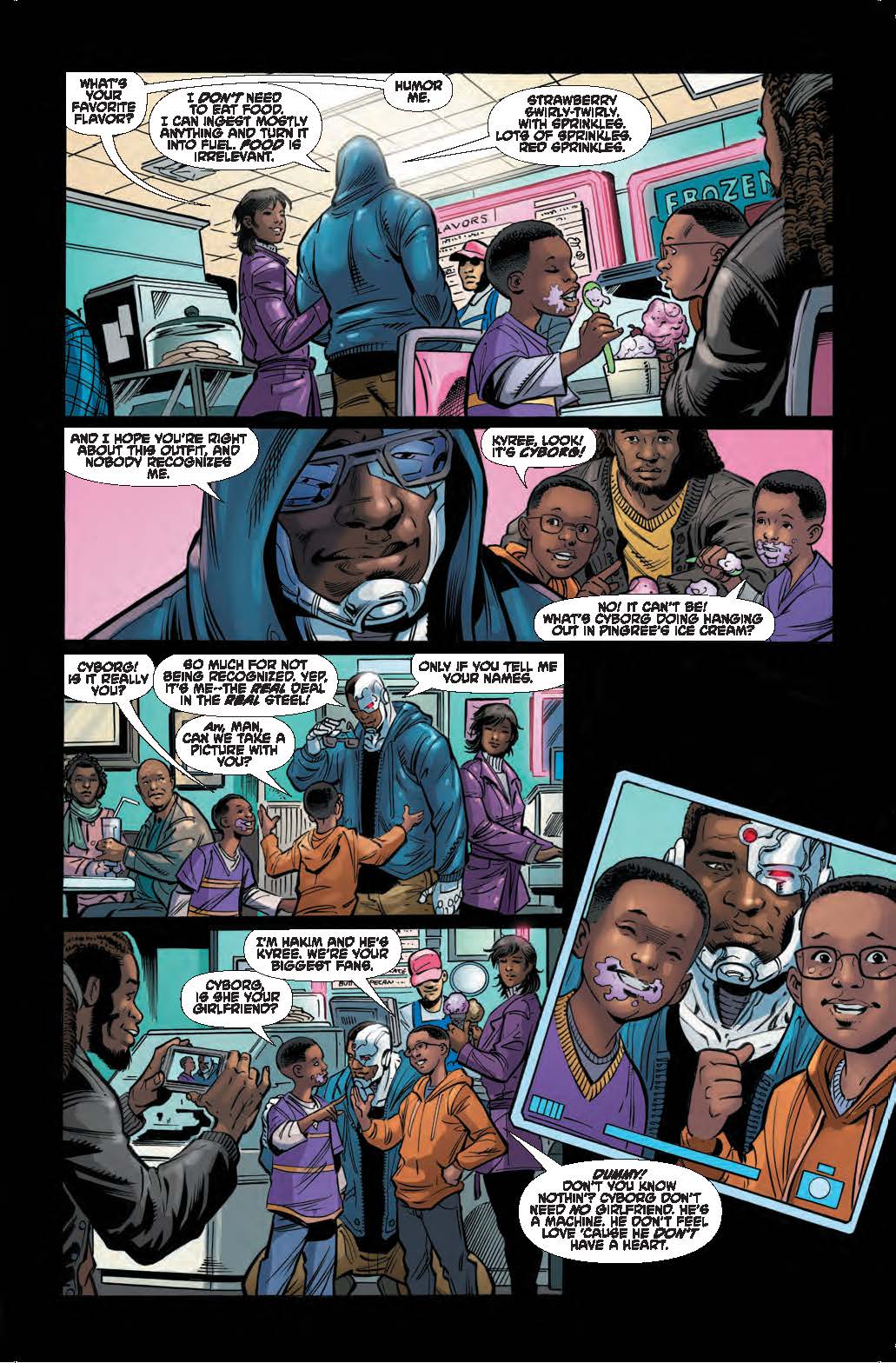 One of the weaknesses in CYBORG #1 is the scene at the jazz club; the blind musician with his words of wisdom was a little cliché and Vic’s sudden epiphany felt rushed. That being said, I enjoyed the musician’s speech about the essence of music being the spontaneity of the moment. Semper manages to fit some great dialogue into an otherwise cliché moment. The art in this scene also redeems it a little because the warm colors in the jazz club really convey the feeling of listening to jazz. Furthermore, the amount of detail that Pelletier puts into Vic’s facial expressions is the only thing that makes his epiphany believable.

Another big problem in CYBORG #1 is that the main villain feels like an afterthought. Kilg%re is introduced in the beginning, and by the time he reappeared at the end I’d already forgotten about him. At this point, I’m more excited for Vic’s showdown with his father. Hopefully the next installment will give us more clues as to what Vic is actually up against. Overall, this issue provides a lot of great characterization for Cyborg, but it doesn’t reveal enough about the villain to keep the reader invested.